Thanks to an obliging press, run largely by logging cronies, Sarawak’s top dogs have got used to not having their self-contradictions pointed out.

This weekend, for example, Governor Taib Mahmud’s former political secretary Karim Hamzah dropped another of his clangers, reported faithfully by the KTS controlled Borneo Post without a murmur as to the implications of the statement.

The PBB/GPS Minister for Tourism came out with the huge admission that the dam obsessed state government is facing a glut of hydro-electricity production, having been forced to suspend Governor Taib’s original plan to build 12 mega-dams using billions of ringgit of borrowed money.

He revealed this long-concealed truth when expressing hope and relief over the announcement that Indonesia plans to hop to Borneo to set up a new capital:

“We have so much in excess of electricity power which if we negotiate properly with the government of Indonesia, we will be able to export this electricity for the building for this new capital (of Indonesia),” [Borneo Post]

gushed Karim Hamzah to an audience of marathon runners, in response to the prospect of  huge numbers of Indonesians arriving in the till now sparsely populated island, a threatened jewel of global natural heritage. 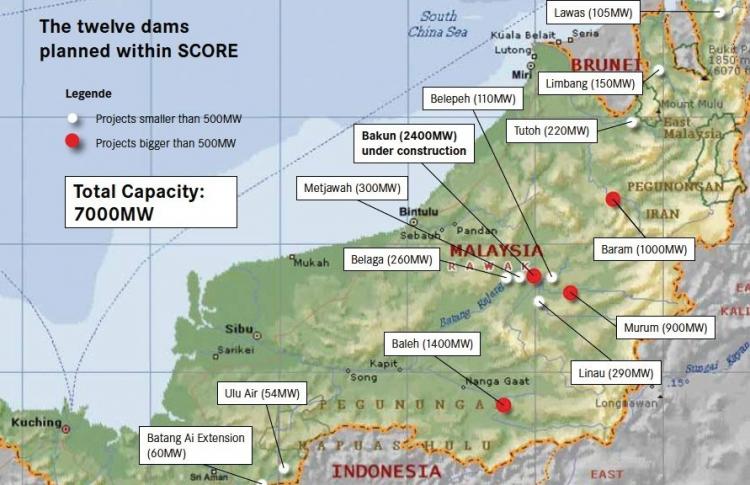 The Sarawak state government has always sought to deny that turbines at Bakun and Murum are running at half capacity, given there simply is not the demand promised to justify the building of these multi-billion ringgit dams, which made so many politicians wealthy thanks to contracts and timber extraction.

Boasts about major industrial development off the back of these supplies of hydro-electricity have come to nought and alternative plans to transmit the electricity to places like KL remain a technological impossibility for the present – as anyone who has studied junior school physics would understand.

Baram Dam was cancelled by previous chief minister Adenan Satem following protests by local communities, however Baleh Dam is under construction and Trusan Dam in Lawas is in progress, targetted only at selling electricity to Sabah and Brunei.

The irony is that so many people in rural Sarawak, whose rivers have been destroyed by these wasteful and debt-inducing mega-structures, do not have access to electricity as a result.  Simple low-cost micro dam technology and solar power would have been a far better investment for ordinary people and it is ordinary people who have been burdened with the tax bill for paying the huge sums in interest on the money borrowed to construct these dams.

Give Away Prices To Aluminium Plant

Of course, the electricity coming from Bakun has enabled one entity to benefit considerably from cheap energy, namely the Press Metal aluminium smelter plant built downriver from Bakun at the SCORE industrial complex in Samalaju.

Initially, another smelter SALCO was also planned as a joint venture with Rio Tinto. However the multi-national company pulled out after Sarawak Report exposed back in 2012 that as part of the deal 40% of the shares had been given to CMS, the company owned by the family of Governor Taib Mahmud.

Press Metal has gone ahead with three plants however, having established a hugely cosy deal for cheap electricity compared to what the people who paid for Bakun i.e. Sarawak’s taxpayers, have to fork out per unit.

DAP Assemblyman for Pujit Dr Ting has produced figures to suggest that whereas the cost for ordinary businesses is 40 cents per kilowat hour and for private consumers it is 34 cents, the power guzzling aluminium company has cut a deal to pay only 11 cents. The smelter is at least using up electricity that would otherwise be wasted, the YB explains as the whole of the rest of Sarawak currently only uses 1,600 megawats, whereas Bakun produces 600 megawats from each of its four turbines (one of which usually still remains idle).

So, whilst consumers are being squeezed compared to the smelter business, they are the ones who have been landed as taxpayers with the costs of the dam in the first place thanks to a decision by the state government to take over the costs of the notorious white elephant.

Sarawak’s state electricity company SESCO paid RM2.5 billion in 2017 for Bakun (allegedly as a favour to Najib whose Finance Ministry was struggling) on top of a RM6.4 billion remaining construction debt, says the DAP representative.

Of course, on top of this liability there are Sarawak’s other dams, including Murum upstream from Bakun also producing under-employed electricity and with debts to service.

It is a situation that has borne out the fears expressed by critics of the destructive, vastly expensive and largely useless mega-projects in the first place. They have enriched a few politicians at the expense of taxpayers. the financial security of the state.

All of which has now been finally admitted by Karim Hamzah. who has let the cat out of the bag by acknowledging “We have so much in excess of electricity power” and that at present there is no genuine market for all this expensively acquired energy.

Certainly the prospect of a new market opening over the border in Kalimantan will have the Taib family salivating over the cabling prospects, having created an effective monopoly for Sarawak Cable, predominantly owned by them.

However, the price is an existential threat to environmental, social and cultural heritage of the Dayak peoples of Borneo – but why should Karim Hamzah or the Taibs begin to care about something like that?