Nothing To Do With Us Guv - KTS Has Issued A Report Against 'Illegal Logging'!

This week the KTS owned BLD Group issued a sanctimonious story through their very own Borneo Post bemoaning the fact that a large area of peat forest has been felled in an area originally licenced out to them for oil palm plantations by their corrupted political crony Taib Mahmud.

This was all illegal logging, they explained, and they had only just found out about it:

“The area that has been illegally logged [at Sungai Loba Kabang, 39km from Sibu] is part of BLD Group’s efforts to conserve valuable peat forest. Company staff discovered the illegal logging during a patrol in the area on Wednesday.
Besides a large number of trees felled, tracks of heavy machinery being used in the area were also found.” [Borneo Post]

Sarawak Report wonders from what date BLD has sought to preserve the area from logging, since it appears to be part of a vast chunk of land ceded to the group’s Managing Director and major shareholder Henry Lau of the timber conglomerate KTS starting back in 2008 for the very purpose of oil palm plantation?

In March the Primary Industries Minister, Teresa Kok, announced a Cabinet decision to ban further logging on peat soil as part of a drive to gain ‘100% certification’ for all Malaysia’s palm oil by the end of this year – under Malaysia’s own MSPO scheme, which is considered less stringent compared to the Round Table on Sustainable Palm Oil, but progress nonetheless.

KTS, which now manages vast plantations, needs that certification. And in the spirit of the hour, the ‘news report’ put out by the company’s own news organisation took ample opportunity to highlight KTS’s worthy commitment to ‘sustainable practices’.

Indeed anyone might be forgiven for imagining that this story of a ‘shocking discovery of illegal logging’ in an area the company has been allegedly seeking to protect, was merely some PR effort to boost the ‘eco-credentials’ of a firm that till now has rated as one of the world’s worst deforesters and abusers of indigenous rights:

The company, which is committed to preserving the environment, is calling on the Sarawak government to look into the issue and to take immediate action against those involved in illegal logging.
A police report has been lodged on the matter.
BLD Group launched its sustainable palm oil policy this year.
The company is committed to no peat deforestation, no peat development, and no exploitation.  [underlines added]

One has to ask on what basis is the logging is considered ‘illegal’ by KTS and what crimes have been refered to in the police report, given this company received a licence to log the area?

Certainly, many concerned with the criminal circumstances bedevilling all the concessions and contracts handed out in Sarawak over past decades would absolutely agree that the logging was illegal, but that illegality would be largely centred around the right of KTS itself to hold control of the crony concession in the first place.

After all, Taib handed the original contract to KTS owned BLD to do exactly what is going on – i.e. to reduce this peatland area into oil palm plantation.

In the same vein, huge further tracts of land have been handed to BLD/KTS for this very same purpose all over Sarawak. Thanks to the leak of previously concealed documentation Sarawak Report has identified a total of around 45,ooo hectares granted to BLD Group by the Sarawak Government in the period after 2008 for “opl” i.e. clearance of timber to be replaced oil palm and we do not begin to suggest this list is comprehensive:

Spies In The Sky

And Sarawak Report has news for KTS, which is that there is absolutely no need to send out ‘patrols’ to catch ‘illegal loggers’ in these peatland areas, which they are now so anxious to protect yet in the past were happy to pay a small premium to get the right to log themselves.

For several months now there have been ‘eyes in the sky’, known as satellite monitors, which can shine a light from space on each and every move a bulldozer makes in their dubiously acquired ‘concession areas’.

That information is available online, thanks to outfits like ‘Mighty Earth’ which have set up their Rapid Response’ service over recent months, resulting in troubling reports on what has been happening elsewhere in areas concessioned out to the ‘environmentally concerned’ BLD Group in Sarawak.

Take a look at what has happened in areas concessioned out to KTS/BLD Group over the past year alone in those crucial peatland zones: 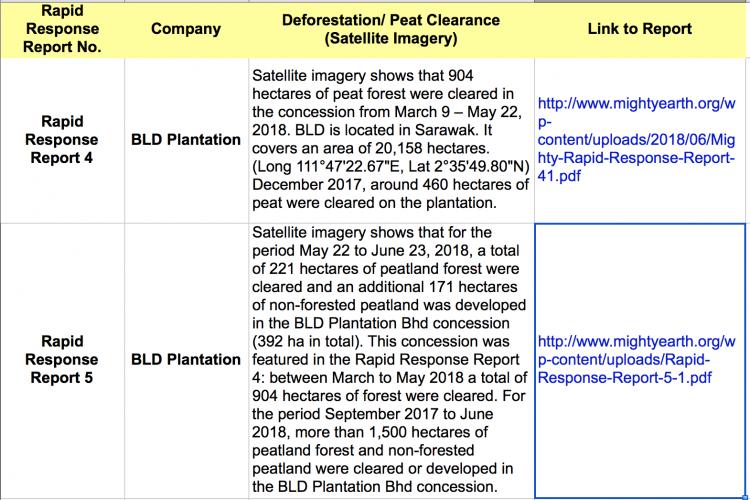 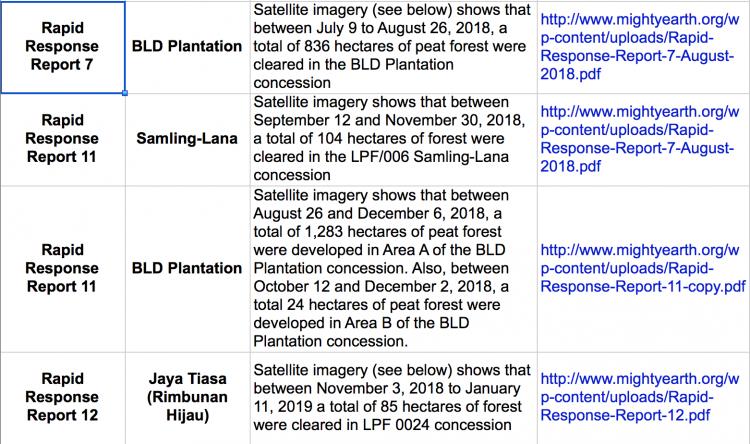 Mighty Earth has evidence on concessions handed out by Taib to other crony companies in Sarawak also. So, BLD and others had no need to send ‘patrols’ out to discover ‘logging violations’ – they can dial it up online and so can anyone else in the Malaysian government or anywhere across the globe.

The issues are not just around peat. It is now universally agreed and accepted that logging that is conducted in violation of indigenous rights or thanks to the cheating or corruption of certain indigenous leaders, often tricked with falsehoods and backhanded agreements, is globally unnacceptable when it comes to the buying of the resulting product. It is all part of a failure of due process to protect the wider good in favour of cronyism and landgrabbing by a few powerfully connected companies.

Malaysia is in the middle of one such scandal at this very moment amidst the discovery of mass deaths of Orang Asli affected by the destruction of their lands. Let’s be plain, gangster logging causes the extermination not only of plants and animals but the people also, with only a handful of beneficiaries in the form of politicians and their business cronies.

So, if there is a present upside, it appears that BLD Group are at least now aware that the appearance of concern (if extremely sudden and shockingly recent) is a necessary move in the right direction. Perhaps the demands by the new Malaysian government and the tightening of the global palm oil markets are starting to have a beneficial effect for local communities, life in our jungles and the health of the planet?

But, the questions need to be more probing as the likes of BLD seek to place ‘police reports’ into ‘illegal logging’.  For example, how did BLD acquire their licence? Who really has been ‘illegally logging’ in their plantations? Why have these ‘illegal loggers’ only now been reported to the authorities, whereas in the past no one in their right minds would have attempted to ‘steal’ KTS licenced timber?

Sarawak Report suggests there should in fact be an MACC inquiry into the entire system of granting logging and plantation licences in Sarawak over the past 40 years and more.  How were these licences granted? Who paid what and who received what? What tax was paid? What consultation and compensation took place?

The logging of Sarawak began in a relative dark age, where the strong men could do what they liked and siphon out their cash via ‘transfer pricing’ and offshore vehicles into the most supposedly respectable of global banking institutions.  But, as their ‘article’ in the Borneo Post makes clear, even KTS has started to realise that technology and good practice has caught up with these enterprises and those who fail to conduct their business in a legitimate way are likely to be exposed.

[Sarawak Report has an ‘interest’ to declare in this matter. As the narrative in the recent book ‘The Sarawak Report’ makes clear, the author of this blog came out to Sarawak back in 2009 to join a group of reporters, who had been alerted to protests against the logging of indigenous forests by the Penan. Having filmed the protests and attempted to interview KTS managers, who arrived at the scene in Hilux vehicles to dissuade the protestors, this journalist along with others found themselves questioned by police in Marudi and then arrested at gun point on their return to Miri to answer questions. All the journalists were then urged to leave the state and placed on a ‘blacklist’ at the request of then chief minister Taib Mahmud, never to be allowed to re-enter Sarawak. As the group headed on their way out of the state they saw the headlines on the KTS-owned Borneo Post in all the newstands, which accused them of being ‘foreign agitators posing as journalists’ and of ‘inciting’ the protests against logging by the Penan.]