Logging has been suspended amidst angry protests against the company Radiant Lagoon, which is attempting to destroy a key wildlife corridor and buffer zone that links Mulu National Park to the Brunei rainforest in the Tutoh River region.

However, according to a report by the Swiss Bruno Manser Fund, the value of the estimated 30,000 cubic metres of timber already felled in the area (representing 16% of the 4,000 hectares concession) is over USD10 million (RM40 million). 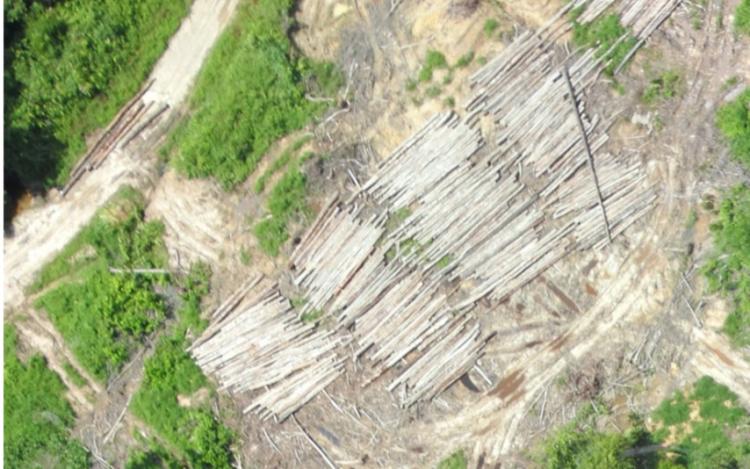 The real interest for the land grabbers is the quick money from timber – Mulu could have been carefully logged, but these folk wanted the lot

It is to be noted that sum represents exactly a hundred times what the company is alleged by protestors to have recently offered to each of the leaders of two Berawan communities affected by the onslaught, in order to get them to stop the protests, a relatively paltry RM400 thousand:

“In or around August 2008, Radiant Lagoon allegedly paid 800,000 RM of “goodwill money” (saguhati) to two leaders of Long Terawan (400,000 MYR) and Kampung Sungai Melinau/Mulu (400,000). The payments were apparently connected to the signing of an agreement between the two leaders, the Penghulu and the Councillor with Radiant Lagoon. According to villagers from Long Terawan, Headman Edmund Abang did not inform the community about this payment about which they ultimately learned from other sources.” [one of several allegations of corruption in the BMF Report on the Mulu Land Grab]

Eventually, if the loggers and planters get their way they stand to make a hundred million dollars out of the timber alone, whilst if the above claims are correct the indigenous people will be left with just enough cash to buy a couple of vehicles per village.

The short-changing of the local folk, is matched only by the damage to the environment caused by the desecration of this biodiversity hotspot, a fifth of which comprises peat soil that produces massive carbon emissions if disturbed and converted to agriculture.

Sarawak Report has already reported that major benefactors of this wanton destruction and railroading of native rights – the local community was never consulted during the secretive issuing of the licences – are, as ever, Sarawak’s dominant Taib family, whose grasping desire to absorb the entire riches of the resource rich state appears to know no bounds. 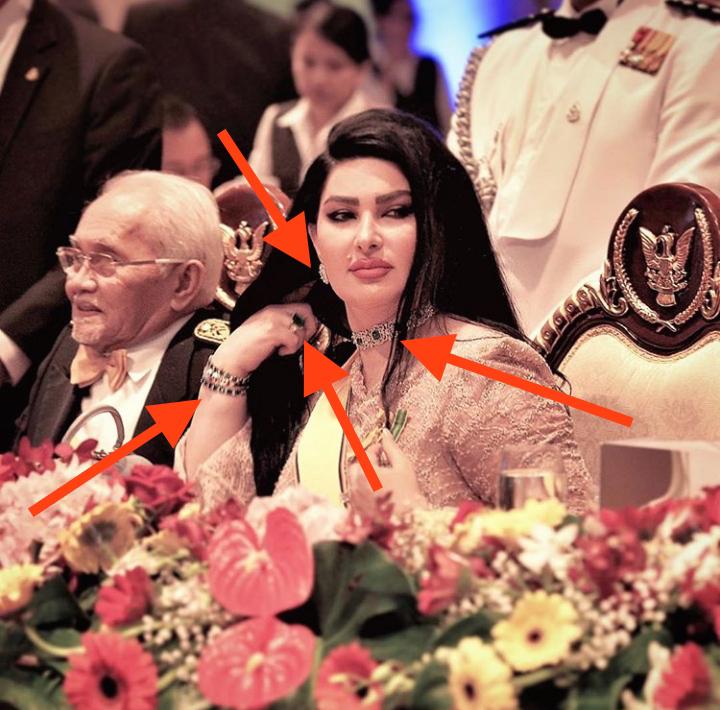 However, further research by BMF into the land records (originally exposed by Sarawak Report in 2011) details the lengths of deceit to which this family were prepared to go, first to get the land into the hands of then chief minister Taib Mahmud’s son for free under a provisional licence (allegedly as a payment in kind) and then to enhance the licence to give Radiant Lagoon a full 15 years licence to exploit the area.

What BMF have identified is that Abu Bekir shifted the public ownership of Radiant Lagoon and his directorship out of his own hands and into the hands of his frequent business partner Chris Chung for a period of several months, whilst the company was negotiating first the granting of the lease and then the enhancement of the terms with the Land and Survey Department, ultimately controlled by his father.

After the terms had been signed through he then returned back onto the company records as the director and 99% shareholder and Chris Chung returned to being a 1% shareholder of the company, until the pair sold it on to the present owners Onlyee Plantations last year.

Chris Chung was the agent of Taib’s son Abu Bekir

It appears a blatant manoeuvre to disguise the clear family interest in Radiant Lagoon at the time that Abu Bekir’s father Taib Mahmud was granting the company leases for nothing and then enhancing the terms.

According to BMF’s research Radiant Lagoon was incorporated 11th September 2007 and that both Abu Bekir Taib and his business partner Chris Chung became directors on 12th February 2008.  However, on 25th April the same year Abu Bekir Taib resigned as director and the company appeared wholly owned by Chris Chung.

The following month May 29th 2008 (see above) the Land Registry confirmed Radiant Lagoon had been granted the two disputed plots in Totoh as a ‘payment in kind’, a move that would have been authorised by Taib Mahmud, who combined being Chief Minister and Finance Minister with being Minister for Planning and Resources Management (putting him in charge of the Land and Survey Department and also the Land Custody and Development Authority).

Later the same year, 3rd December 2008, according to BMF, Radiant Lagoon was granted provisional leases for agricultural purposes over the two lots totalling four and a half thousand hectares by the Land and Survey Department.

Then 12th August 2009 Radiant Lagoon was granted a further ‘Special Condition’ by the Land and Survey Department Sarawak, according to which the planting period was extended from 5 years to 15 years, giving the owners plenty of time to choose when to sell it on to someone to exploit the land.

It was after these manoeuvres were completed that Abu Bekir then re-emerged taking over from Chris Chung, known to be his front man in numerous companies. He revived his position as a Director of Radiant Lagoon 24th December 2009 and on June 11th 2010 he had assumed formal ownership of 99% of the shares in the company, reducing Chris Chung to a 1% ownership. 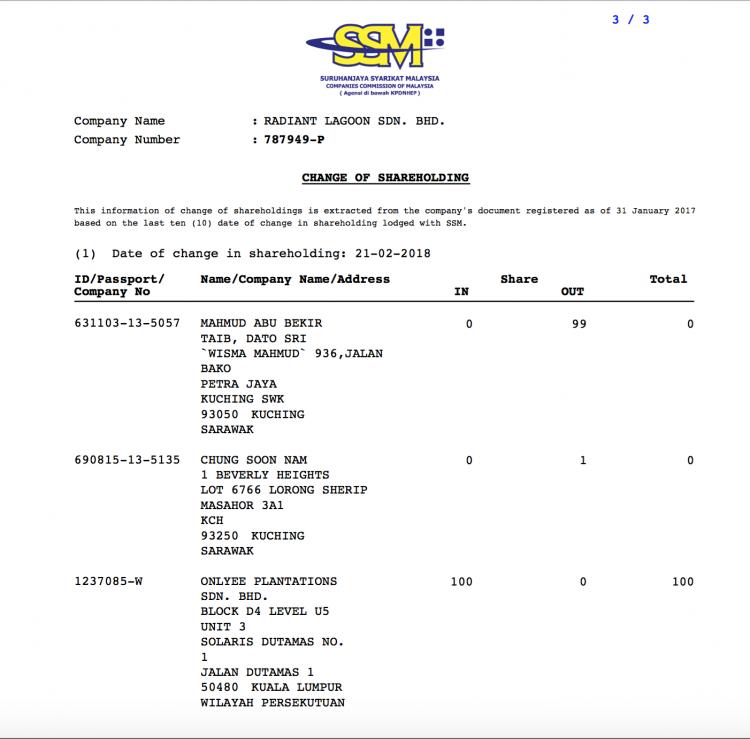 Onlee Plantations presumably did not acquire the company for free so how much did Abu Bekir make for selling on land provided by his Dad?

One assumes that Abu Bekir did not pass on the land for free, even though he apparently paid nothing to receive it. It is plain that he did nothing to the land, except benefit from the opportunity to enhance the terms of its lease and sell it on for the actual value of the concession, after the Sarawak Government itself had received nothing from the land.

Bruno Manser Fund, which campaigns for native rights, has pointed out numerous flaws and abuses in the granting of the lease without informing or gaining the consent of local people.

For one, Radiant Lagoon has cleared the land despite having no timber licence to do so. Even more pernicious, has been the lack of any notice or consultation about these licences when the lands were granted back in 2008 – standard practice in Sarawak, despite the fact that Malaysia is a signatory to the Declaration for the Rights of Indigenous Peoples, of which this is a clear violation.

There are plenty of other abuses, not least the point blank refusal of the state’s Natural Resources and Environment Board to release the Environmental Impact Assessment of the project, which has been required by headmen of the area in accordance with their rights.

The careless and polluting attitudes of the Sarawak landgrabbing tycoons and their political cronies could not be better illustrated than by the discovery of the hazardous pesticide Antracol near a greenhouse producing palm oil seedlings in the area. This product is banned in Europe because it endangers the development of the unborn child – clearly a matter far down the list of concerns for the money-making landgrabbers interested only in exploiting these indigenous lands.

Indeed, Len Talif punned that instead the local people would be ‘digging their own graves’ if they did not allow Radiant Lagoon to take the timber and plant oil palm.

It will come as absolutely no surprise to those in Sarawak to learn that on top of all this the state government has apparently not hesitated to abuse the entire state apparatus and forces of law and order to bully, threaten and cajole the Berawan and Penan communities into compliance with the greedy wishes of the Taibs and their chosen partners.

According to the report, at one meeting a Special Branch officer threatened to arrest Ukau Lupung, the Penan headman of Bateu Bungan, if he continued to resist against the Radiant Lagoon plantation development.

The authorities appear to have dealt with the Berawan in a different way.

On 20 February 2019, Miri resident Nyurak Keti invited the affected stakeholders for a meeting to resolve the conflict at his office on 4 March 2019.
During the 4 March 2019 meeting at the Miri resident’s office, no agreement was reached over the land conflict. However, the meeting was used by the Sarawak state government (District Officer Marudi) to hand over a certificate of appointment to the new headman of Long Terawan, a controversial person (Ugum Jalong) who is favourable to the oil palm plantation development. Apparently, he had been appointed already on 2nd May 2018 without the community being properly informed.

Taking advantage of the situation Radiant Lagoon has proceeded to deal only with the Berawan people of the region when seeking to reach settlement over the land disputes, say BMF, despite the Penan being the more numerous inhabitants of the area and despite clear native customary rights claims established by the Penan in the region. 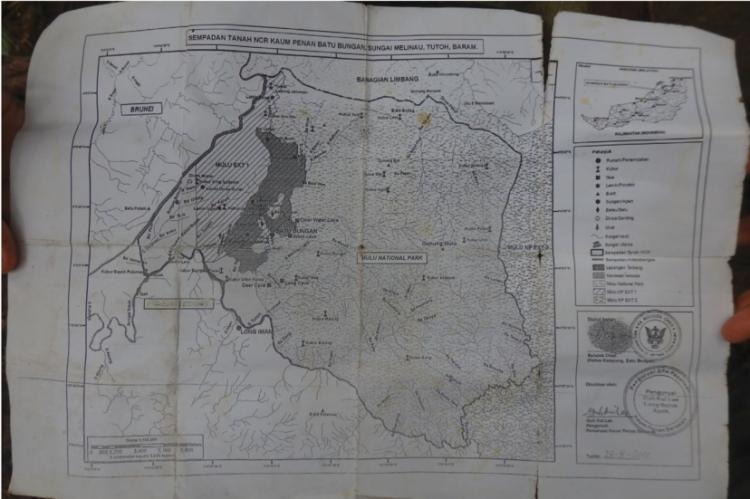 The maneouvring got worse, according to the report as numerous disputes have now errupted between the various headmen of the villages, including the one newly appointed without consultation with the local people, relating to alleged payments made by Radiant Lagoon and other interested plantation companies in the area:

When challenged during the 4 March 2019 meeting at the Resident’s office in Miri, Ugum Jalong from Long Terawan admitted that he and Headman Edmund Abang had received payments of RM 400,000 each from Radiant Lagoon. It was furthermore communicated that villagers of Long Terawan had been paid RM 3500 per family without knowing from where the money came and why.

This is the situation that for now has brought logging to a halt as the international environment community has rallied behind the issue, following a petition to stop the damage to Mulu which has now achieved 150,000 signatures.

The fact that this destruction of one of Sarawak’s last remaining areas of genuine timber cover represents yet another ecological disaster almost seems as a side issue to this appalling example of routine and corrupt governance in Sarawak.

It is worth bearing in mind that even the protected reserve of Mulu itself is in the hands of the Taib family, as revealed by Sarawak Report several years ago, also thanks only to leaked information, given the criminal lack of transparency in the management of the state.

However, the scandal of Radiant Lagoon cannot and must not continue to be ignored by the new Malaysian government.

Action has to be taken to bring this criminal corruption to heel and to examine in fine detail the remaining 600 thousand further hectares of concessions that have been handed out by the same state government for logging and conversion, in direct contravention of the election pledges made by the previous chief minister Adenan Satem that there would be “no more logging” and “no more palm oil plantations” in Sarawak.

The case of Radiant Lagoon ought to be immediately reported to the anti-corruption authorities and a full forensic enquiry should be made of each and every concession authorised under Taib Mahmud.

‘Autonomy’ ought never to mean a licence for any ruler to steal from one’s own people. 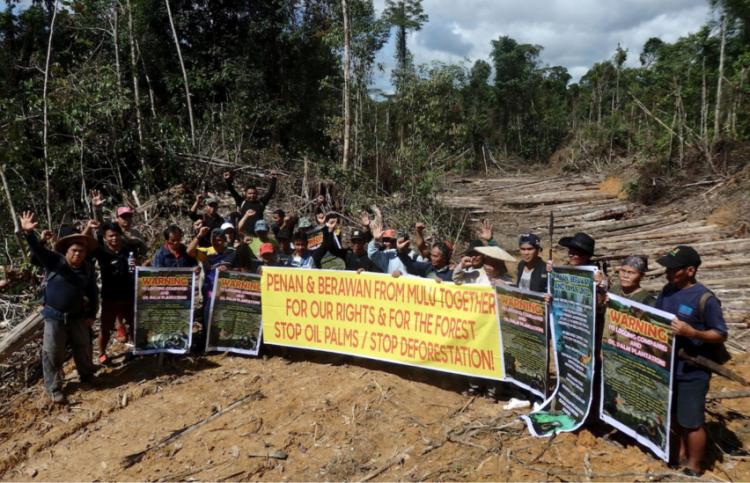