Our Problems Lie Closer To Home Than Europe, Say Smallholders In Sarawak

In March, the European Union officially approved a measure to phase out biofuels, including palm oil by the year 2030, intended to curb the use of crops that cause deforestation in transportation fuels.

Malaysia’s Minister of Primary Industries Teresa Kok reflected the industry’s response at the time by saying that Europe’s actions were both “discriminatory” and “designed to hurt the livelihoods of millions of small farmers” in Malaysia.

In Sarawak however, we visited smallholders in Serian who told us a very different story. They told us that land grabbing by the bigger plantation companies was the single biggest threat to their livelihoods. 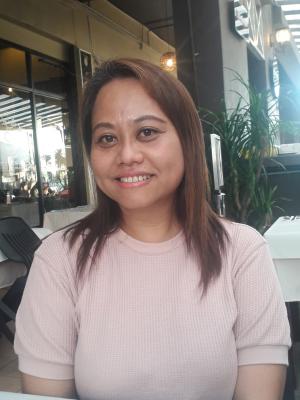 Bunie Japah – one of the smallholders who spoke to SR

We spoke to Iban smallholders in Melikin, Serian who are currently embroiled in a land dispute with two plantation companies, United Teamtrade Sdn Bhd and Memaju Jaya Sdn Bhd.

The Iban land in Melikin was first alienated to the companies in 2010. Communities challenged the encroachment of their lands in court and lost, but appealed to the Court of Appeal of which the decision is set for later this month.

It’s a case that has been covered by Sarawak Report since 2012 and is emblematic of the struggles facing Sarawak’s indigenous communities.

We have previously exposed how the companies are politically connected and highlighted how community members who stood up to them were arrested and faced aggression and violent repercussion at the hands of armed gangsters.

As so often is the case in Sarawak, it was the community who were treated as the criminals, not the plantation companies or the gangsters who terrorised the landowners. 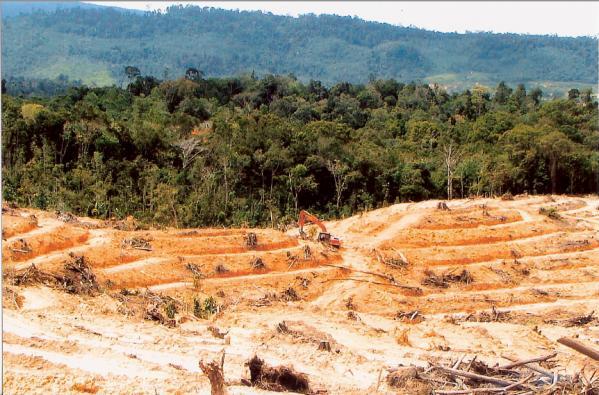 Smallholder David Kallom Umpie from Kampung Menyang in Balai Ringin, whose land was encroached by the companies in Melikin told Sarawak Report:

“We have problems with oil palm [in Sarawak]. The European Union has the right to boycott because we have a lot of land conflicts. We have over 200 land rights cases ongoing. We will lose income [due to the EU phasing out of biofuel], but we are losing much bigger things. The big companies cause the problem. Why doesn’t the state government look after us? We want our native lands back. Return it to the landowners.”

Much of that Pemakai Menoa and Pulau Galau land has been encroached by plantation companies, which now renders communities who oppose it at court helpless.

The crop’s not the problem, it’s competing with bigger players

Despite all of that, David was still positive about oil palm.  He told Sarawak Report that “It is the best crop for small farmers as its got a world market”. When asked if he would choose to diversify and plant a different crop due to the EU decision, he replied negatively as it would take him at least three years to grow something else and he wouldn’t know how to generate income in the meantime. To him, planting oil palm was acceptable, on the condition that indigenous communities had their land to do so sustainably. 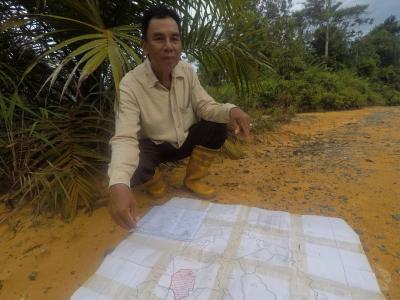 Branka Anak Saweng with the map showing his troubles over landgrabs

Another smallholder Branka anak Saweng who lives with his wife Rose in Kampung Kepangan, Melikin had a substantial part of land bulldozed by United Teamtrade Sdn Bhd in 2012.

He told Sarawak Report that he felt the plantation companies would suffer more from the EU’s decision because it was detrimental to their profit. He, like David pointed out that smallholder farmers were predominantly suffering from the encroachment of their ancestral land.

Although still able to harvest oil palm on what remaining land he has, Branka is still struggling to produce a high-yielding crop because fertiliser is too expensive. Not being able to compete with the financial and legal resources available to the large plantation companies, Branka was instead forced to survive by planting rice and pepper in his village.

Further away we spoke to Bunie Japah, an Iban farmer from Kampung Sungai Engkabang B who called on the EU to differentiate between the smallholders who harvest oil palm and the big plantation companies.

“I think the [EU] ban is unfair, the main culprits [of deforestation] are the big companies. The EU should categorise oil palm farmers, not generalise them” she told Sarawak Report.

Bunie highlighted how she wanted to see plantation mills set up, owned and run by indigenous smallholders which would provide much needed traceability and transparency of smallholder produced palm oil for the international market. She wanted to see indigenous run mills to be considered for something similar to fair trade certification and hoped the initiative would be welcomed by Minister Teresa Kok.

Like David and Branka, Bunie told Sarawak Report that land grabbing by big companies was still the biggest threat to their livelihood:

“The Sarawak Land Code needs to change. Native communities cannot get their land titles. In the longterm the EU ban may be a good idea [to help with indigenous land matters] but in the short term focus should be on the concerns of smallholders” she said.

Who Does DOPPA Represent?

Last year, Teresa Kok reached out to the Dayak Oil Palm Planters Association (DOPPA), an association set up in 2015, purportedly founded to represent the concerns of indigenous oil palm planters in Sarawak, to help the Malaysian Palm Oil Board (MPOB) achieve 100% Malaysian Sustainable Palm Oil (MSPO) certification throughout the country by the end of the year.

It appears that the MPOB’s hope is that by simply certifying all Malaysian oil palm plantations as sustainable, that concerns over the industry would be fully dealt with. But of course, Sarawak’s oil palm sector is far from sustainable and genuine sustainability certification cannot be achieved in the course of just a year.

The MSPO is Malaysia’s own sustainability certification scheme, which falls short of other more recognised international regulations such as the Roundtable on Sustainable Palm Oil (RSPO), which require a more stringent process of regulation.

A full and transparent investigation of the situation on the ground is needed and it should be conducted by an independent body, which has no association with the GPS state government who have a vested interest when it comes to state land matters.

We understand however, that not all DOPPA’s members share the views of the GPS government as one of our interviewees pointed out. “Not all are GPS supporters. We need the government of the day to support our cause, irrespective of who they are”, they emphasised, highlighting that engagement with government bodies was an important part of the smallholders struggle.

We asked all three of our interviewees if they had heard of DOPPA. Branka and David told Sarawak Report that they had been encouraged to sign up as members of DOPPA at an event in Serian by filling out a form and paying a RM50 subscription fee but had not heard from or been provided any support by the group since.

Bunie said she was an active member of DOPPA and was positive about the group, saying it was “fighting for land to be given native title”. She said that DOPPA should reach out to all its members so they were fully updated and knew what the group was doing.

No phone number or address could be found for DOPPA online and their website appeared to be offline at the time of publishing. If a basic online search cannot produce information about DOPPA, we wonder how its members are able to engage with them or have their concerns genuinely represented. We also wonder how DOPPA have used the registration fees collected and if it has been fully accounted for?

The case of Melikin is not an anomaly unfortunately and Sarawak Report has reported many cases of land grabbing by plantation companies over the years. Just last month for example, US based environmental watchdog Mighty Earth who use satellite technology to monitor more than 3500 oil palm concessions in Indonesia and Malaysia reported that land had been cleared for oil palm in areas of Mulu, Marudi and Belaga in Sarawak.

The companies identified in the land clearing, Samling, Shin Yang and Double Dynasty have all previously been exposed by Sarawak Report for having close connections to former Chief Minister and current Governor of Sarawak, Taib Mahmud.

It’s time the Malaysian government acknowledged how plantation companies have acted in Sarawak and initiated a thorough and transparent investigation into all reported instances of human rights abuses and environmental devastation by those who give its industry a bad name.

[This report was produced by an accredited writer for Sarawak Report, whose editor remains officially banned from Sarawak on the orders of Taib Mahmud (no reason given)].