Sarawak Report once again owes thanks to many Malaysians who came to our support against attempts at legal bullying by the political party PAS, which through Hadi sought to force a retraction and discredit this site in advance of the last election.

The commentary “As Najib Denies All Over 1MDB Let’s Not Forget His Many Other Criminal Connections” has remained online throughout this case and is still online, despite PAS’s president Hadi Awang having withdrawn his case.  Sarawak Report stands by the article sued over, including the fact the article never even referred to Hadi.

Hadi’s suit had claimed that Sarawak Report was accusing him personally in the statement:

“Najib … has gone on to “woo” the PAS Islamic party away from the opposition coalition in the normal way he woos – RM90 million is widely reckoned to have flowed into the top echelons of PAS in recent months (BN veterans would tell them they came cheap).” [see article]

Sarawak Report denied that meaning, but asserted that it was true there was evidence of money flowing into PAS.

We stuck to our guns amidst attempts to cost us huge sums of money and a mass of online villification and libel perpetratated by supporters of PAS and Najib.  In April, just before the election, PAS leaders even went so far as to falsely claim that they had somehow ‘won’ the bulk of the case a full year before it was due to come to court.  Sarawak Report had merely paid costs relating to case management disputes.

In fact, amidst piling evidence, Hadi and his witnesses were facing a full 11 day trial starting this April Fools Day (April 1st 2019) in London.  With that reality looming the parties have agreed to discontinue the proceedings, despite PAS party members having stated for months they would ‘never forgive’ Sarawak Report 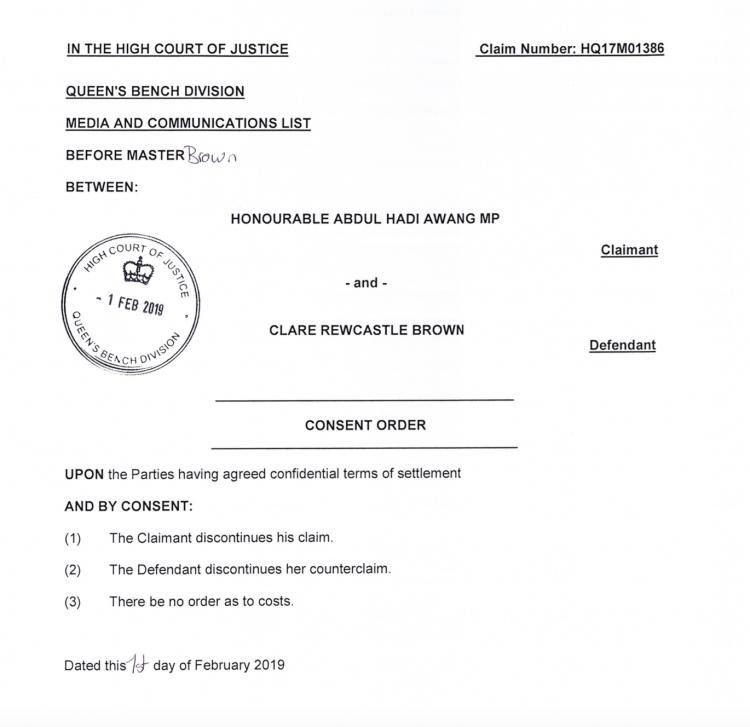 Libel suits are often employed by powerful individuals, who have access to the wherewithal to pay the outrageous fees of London law firms such as Hadi’s Carter Ruck.  Generally, the expectation is that defendants will buckle rather than meet the ruinous costs of standing their ground.

However, anyone pursuing a libel action ought to be sure that they are ready and willing to end up in the witness box. Another lesson for potential libel claimants is Hadi’s libel action has given enormous publicity to the article and his alleged meaning, which now remains in the public domain.