Once again PAS leaders have contradicted their own earlier statements as president Hadi Awang today declared he was willing to bury PAS’s decades old disaproval of its former corrupt political foe UMNO, in favour of a vaunted new ‘Muslim alliance’.

A corrupt and cruel Muslim ruler is better than an honest and caring non-Muslim was his message, meaning that under his leadership UMNO and PAS are now a united front.

However, not so long ago in his sworn statements to the British court Hadi had made clear that although his quarrels with DAP had divided the opposition back in 2015 (to former PM Najib’s advantage), PAS were still adamantly against its traditional enemy UMNO and would never join up with the then governing coalition BN.

This was Hadi’s reponse to Sarawak Report’s contention that there had been growing ties between UMNO and PAS, ever since the Ulama faction had managed to eject the previous moderate leadership of the party in 2015:

‘Regardless of the fact that PAS is no longer in the Opposition coalition, we remain in opposition to UMNO and Prime Minister Najib… It is simply not the case that PAS are colluding with UMNO, whether in this libel case, or more generally politically.”
[Hadi Awang final witness statement] 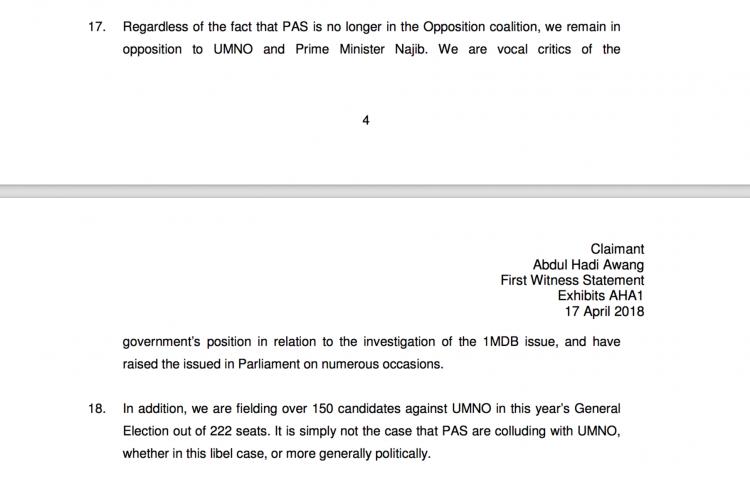 What Hadi Awang swore to in court just before GE15

Yet that reassurance to the London court (above) represents a total contradiction of what Hadi is now saying just a few months later, campaigning on UMNO’s behalf as its formal ally in the present by-election.

However, Hadi is also contradicting the facts that were available before he made his denials about collusion a year ago.  In the above witness statement laid before the London court in April 2018 just days before the GE14 election this PAS leader swore that he was not colluding with UMNO, politically or in any other way.

Yet Sarawak Report was soon to submit further evidence that clearly demonstrated that on March 21st, three weeks before Hadi made that statement, an emissary from UMNO named Shamsul Zairil bin Kamaruddin (who worked for the UMNO Treasurer Salleh Keruak) took a bag containing RM2.5 million into Bank Islam and paid the cash into PAS accounts.

The deposit has been clearly documented and there has been no denial by UMNO or Shamsul that he deposited that cash, which is believed to have been on the direct orders of party leader Najib Razak.

Hadi responded to the publishing of the relevant documentation online by admitting that PAS received the money, but denying the money came from UMNO.

However, in his court submission he told a completely different story, in that he claimed instead that he didn’t know where the money came from after all.

Sarawak Report has now received confirmation that this money paid to PAS was used to pay for several of PAS’s record numbers of election deposits at GE14, together with another million or so ringgit that was apparently later also deposited in cash by UMNO into PAS accounts around the same time in the same way.

This had been put forward as a likely probability by Sarawak Report in our defence documents to the court: 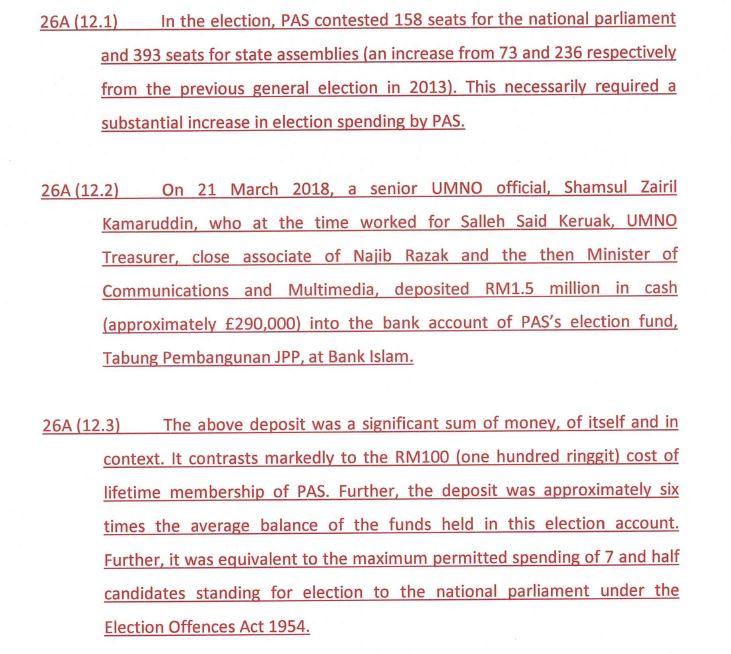 What Sarawak Report said in its defence statement

It certainly presents a very different picture to the claims made by Hadi that there was no collusion during the election and no alliance between the parties.

PAS was still claiming at the last election to be an opposition party for UMNO/BN and insisted that the unprecedented and extremely expensive decision to fight in all federal and state seats had nothing to do with a plan to split the opposition vote on behalf of UMNO.  Specifically, Hadi in his sworn statement aswering to the defence claimed the money for seat deposits came from donations by members, despite the size of the one off donations that dwafed the rest of the money in their election accounts:

And yet in fact it biw turns out that it was indeed UMNO who secretly paid for those seat deposits and almost immediately after the election the two parties started to pose openly together as allies, even to the extent of their present posture of supporting each other’s candidates at by-elections where just weeks ago they were acting as political opponents.

It begs the question as to whether Hadi’s new conversion to supporting UMNO is purely the product of a sudden willingness “to forget past wrongs and unite Muslims” or just a question of bought friendship in the form of those paid for deposits and indeed the other inputs of cash from UMNO into PAS which Hadi’s senior supporter Nik Abduh referred to in a tape that he at first denied was genuine, but not admits was true?