Sarawak Report has exclusively sighted documents linked to the liquidation of the now notorious Maika Holdings, which indicate that hundreds of thousands of ringgit were passed in cash payments and payments to companies connected to the fund’s CEO, Vell Pari, during the years  2003-2009, preceeding its collapse.

Despite a seven year investigation into the demise of the company, which lost savings belonging to some 66,000 shareholders linked to the Malaysian Indian Congress (MIC) party, the papers have yet to have been made public.  In an affidavit on the situation the liquidator allegedly also refered to evidence of “grave wrongdoing and massive misappropriation of funds” during the wind up of the company. 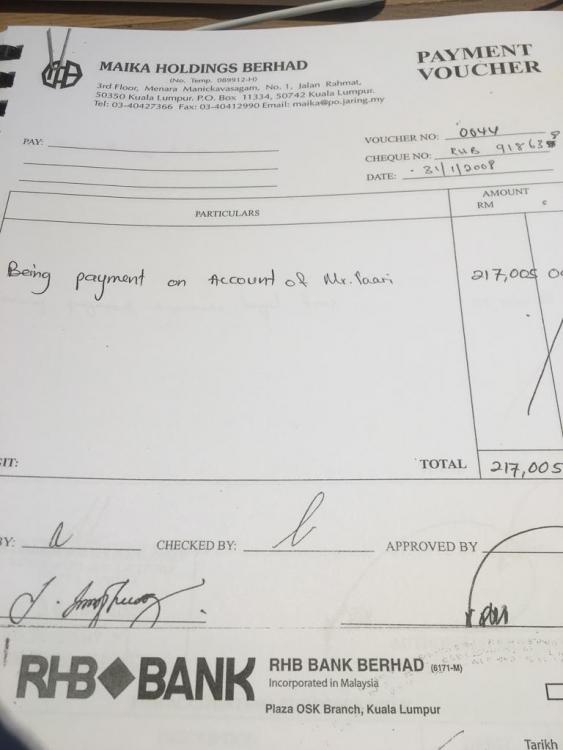 Cash payment to Vell Paari in 2008? Part of the documentation now lodged with MACC

Sarawak Report believes that whistleblowers have now made a police report and passed the information with the Malaysian Anti Corruption Commission, something they were fearful to do under the previous government.  The MIC was a constituent party of BN and received some RM20 millions in cheques signed by Najib out of 1MDB funded accounts to support their GE13 campaign.

According to the latest documents seen by Sarawak Report tens of thousands of ringgit were extracted both in cash and payments to his own companies from Maika’s accounts by Vell Paari, the present secretary general of MIC, who was appointed CEO of Maika in 1999. Vell Paari is the son of Sami Vellu, who set up the fund in 1983 during his 30 year tenure of the presidency of MIC (1979-2010).

Twenty cash payments totalling RM1.6 million were made out by the company to Vell Paari duing the period, some under the guise of ‘promotional finder fees’ but most without any explanation given.

In the case of one payment of RM33,500 to a law firm, Sree Harry, the sum appears to have been in settlement of bills pertaining to private action taken by Vell Paari’s mother over a matter that had nothing to do with the interests of the ordinary shareholders of Maika Holdings. 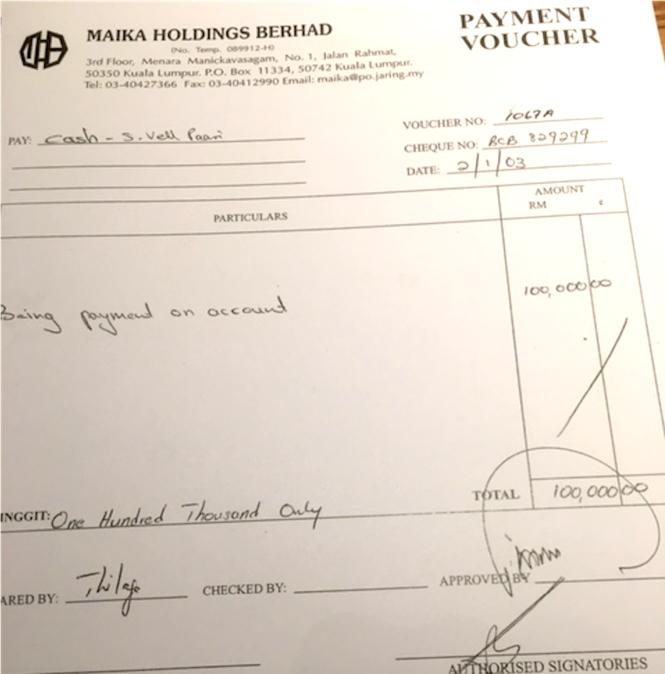 However, this is not the total amount of apparently unexplained payments benefitting the fund’s CEO, according to the documentation.

OKA Motor Company Limited, a company owned by Paari and his family based in Perth, also received RM1.3 million in nine separate payments 1999-2000 on the basis of an alleged ‘technology transfer’ for a ‘soft shell version of a 4X4 wheel drive army vehicle’. A further AUD145,301 was also remitted in 2002, after the termination of the supposed contract with Maika, which whistleblowers say was of no substance in terms of outcomes for the investment. 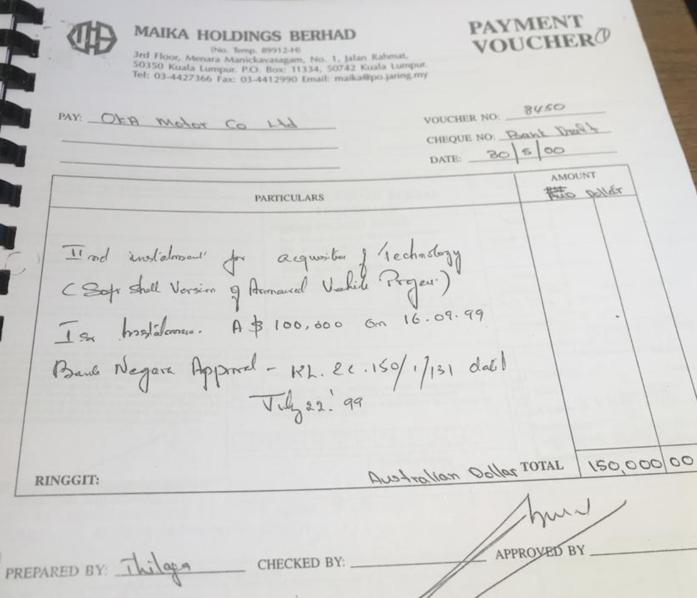 Whistleblowers from the company say this was not the kind of investment target in the remit of Maika Holdings. OKA has meanwhile been reported as being in conflict with the Australian authorities for allegedly not paying employee taxes.

The movie distribution company Pyramid Saimira Theatre Limited (specialising in Tamil films) also owned by Vell Paari also received RM1.3 million (15 million Indian Rupees) from Maika Intellectual Resources Sdn Bhd  to buy rights in 2007 to the film Sivaji The Boss.  There was no board approval for these payments and a further RM200,ooo was also passed to Pyramid in cash. 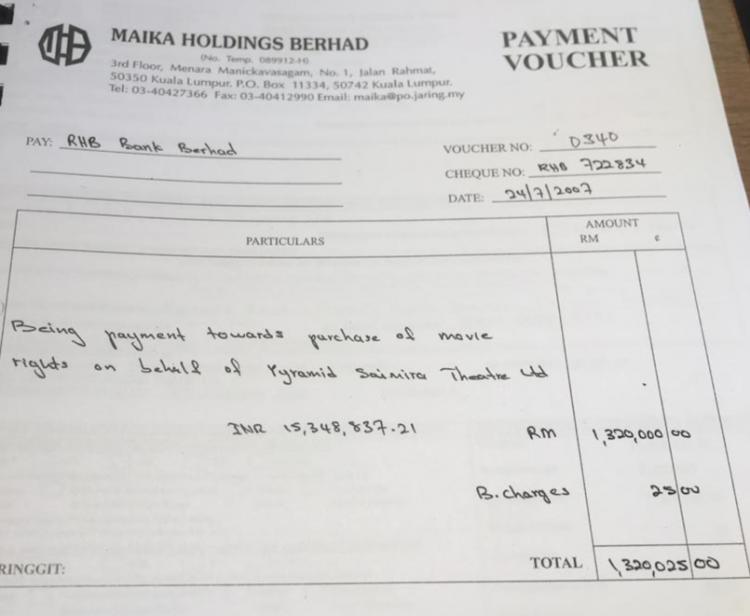 Further payments were made in 2002 totalling AUD725 thousand to OKA Motors, purportedly for the procurement of advanced software.

Maika Holdings was scandalously bailed out and liquidated back in 2010 after the fund, which had raised over RM106 million in cash from trusting ordinary MIC party members when it was launched in 1982, reported itself to be insolvent. Shareholders, who had in many cases ploughed their life savings into the fund, received only 80% of their original investment, although insiders claim that if the fund had been better managed it ought to have been worth over a billion ringgit by the time it folded.

The extent to which apparently self-serving withdrawals of cash by the CEO and the investment into his own companies contributed to the disastrous collapse has yet to have been publicly evaluated, since for seven years no report has been issued into the matter.

Whether Vell Paari can provide a justification for the payments or to the contrary ought to be held to account has also failed to be publicly discussed, since for all that time the information has been kept secret.

Sarawak Report has sought to contact Vell Paari (currently understood to be abroad) through the MIC to gain his comment now that the matter has apparently been referred at last to investigators.  We will update on any response.