The first story written by Sarawak Report about 1MDB, way back in July 2013, concerned Goldman Sachs.  This was a time when few mainstream news organisations had ventured to do more than raise an eyebrow over the immense profits garnered by the bank out of its absurdly over-priced and under-publicised bonds.

However, Sarawak Report obtained a copy of one of those secretive bond offerings that exposed how immensly disadvantageous the deal was for the Malaysian fund, so we went public and called foul:

Sarawak Report would like to draw the attention of the United States financial regulators to what has emerged as an exceedingly large and unusual payment made during a recent off-shore bond transaction, conducted by one of its major banks. The terms and conditions of the offer note, now in our possession, have lifted the lid on a deal that was widely criticised at the time for its lack of transparency. [SR July 2013] 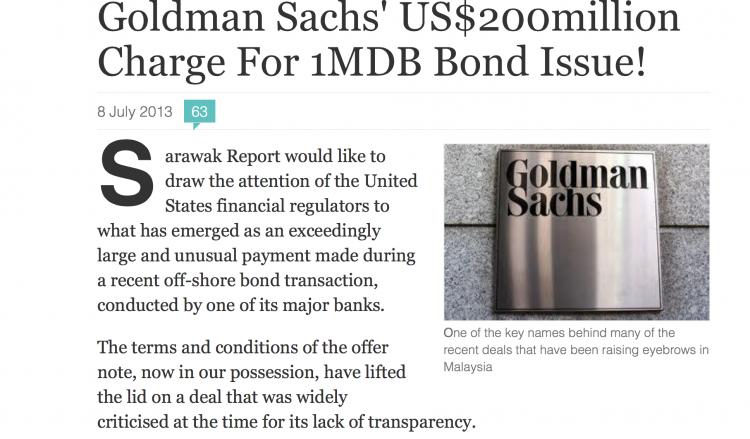 Goldman Sachs is a notoriously litigeous bank, which keeps a close eye on coverage of its activities.  So, when after a few days Sarawak Report had received no legal threats or feedback of any kind, we knew we were on to something and kept on asking questions about the strange connections between the bank and Malaysia’s corrupted leadership.

Despite our probing, there was not a peep or whisper from the bank for the next three years as bit by bit we uncovered and published more and more dubious information about the role of the bank and some of its operators, most particularly Tim Leissner the Southeast Asia Chairman behind those deals.

The question that the head honchos of the bank are now going to have to answer when Malaysia’s criminal prosecution gets underway is why they failed not only to prevent what has now been admitted by Leissner as a dreadful series of grand thefts and deliberate bribes (of Najib and Rosmah amongst others) but also spent those three years ignoring the sorts of open warnings being made by Sarawak Report?

According to Bloomberg, the departing CEO Lloyd Blankfein had decided to retire early while the bank was still plain sailing. It turned out he had timed it just as the 1MDB wave hit. His successor, David Soloman, thundered at his exit party last week against the damage “one person can do” to the bank, in a reference to Tim Leissner as shares dropped 30% over 1MDB (following Malaysia’s criminal charges, hot on the heals of Abu Dhabi’s civil litigation, those share prices could plunge further).

However, Malaysia’s criminal case will quite rightly target the failings and probably worse of a far wider community within the bank’s senior heirarchy than that “one person”, many of whom enjoyed fat bonuses out of 1MDB’s dodgy loan deals.

In short: a series of highly peculiar but eye-poppingly lucrative transactions were first allowed to pass scrutiny by the bank, when they were riddled with corrupt practice; then public criticisms and concerns voiced by this blog and opposition politicians in Malaysia were simply ignored, as were obvious discrepancies arising out of 1MDB’s other documents and reports. Tim Leissner himself was only ‘let go on leave’ as late as the start of 2016, months after Sarawak Report, together with Tony Pua, The Edge and latterly the Wall Street Journal, had started repeatedly drawing attention to the questions and flaws in  the deals.

The apparent cover-up continued.  At first Goldman Sachs indicated that Leissner was later sacked merely because of some unspecified misdemenour owing to a recommendation of a conflicted person for a job.  It later was admitted he had provided an unauthorised reference by the bank for a ‘third party’, who turned out to be Jho Low.

Yet Goldman made no move to deal with the actual thefts connected to 1MDB until it so happened that Mr Leissner took an ill-advised trip back to the United States (such is the apparent sense of impunity of the banker and his former colleagues, who basked in their description as Masters of the Universe) where he was promptly arrested, presumably to his own surprise, some time last June.

Probed by the FBI and DOJ Leissner has now confessed to stealing $100 million from 1MDB in backhanders and to using his own bank accounts to help Najib’s secret proxy Jho Low send bribes to the PM’s wife Rosmah. He has also admitted to constructing a series of bond arrangements for his Malaysian clients that were deliberately against the interest of the fund, purely to raise more money for himself and his colleagues at the bank.

The Masters of the Universe at Goldman Sachs did nothing to dig out or address these billion dollar transgressions by their bank even after the DOJ launched a court suit based on Liessner’s confessions, which time and again referred to Liessner’s admission that he was working with other senior colleagues at the bank to get round the compliance and oversight departments, which appear to have played the role of mere window-dressers for the all important ‘deal-makers’ at the bank.

The bank has merely stuck to the mantra that it too has been the victim of ‘rogue’ operators and ‘bad apples’.  “This is not who we are” was how the incoming Mr Solomon bemoaned the situation to his colleagues, although it emerged he had quietly also placed another very senior partner at the bank Andrea Vella on leave as well – Vella was Leissner’s  line manager.

It has finally emerged that Blankfein himself had met with Najib together with Jho Low in New York at the start of the most lucrative spate of business dealings for the bank with 1MDB, despite Jho Low having been red alerted by the compliance departments as a character the bank should avoid doing business with.

Unfortunately for Goldman, with the Abu Dhabi civil case, Malaysia’s criminal case and soon the prosecution of Roger Ng by the FBI, not to mention the prospect of an eventual arrest of Jho Low, it seems clear that any other remaining secrets are likely to come tumbling out not just about the 1MDB saga, but a whole lot of other transactions by Goldman (which ought to include those other strangely expensive bonds raised fro Sarawak Energy back in 2012).

Why It Matters So Much

Sarawak Report was a little-known niche blog at the time it first called out Goldman Sachs back in 2013, seeking to focus attention and understanding on the pernicious effects of poor governance and corruption through one immense and tragic case study, which was the destruction of the jungles of East Malaysia (and wider Borneo).

From the start it was apparent that the driving forces behind the illegal land grabs and resource snatching included not only the greed of local decision-makers, but that of global facilitators who were enabling the dirty profits to be laundered through the international finance systems into ‘secure’ assets in supposedly better governed regions of the world.

This writer along with others could see that corrupt bankers, willing to turn a blind eye and worse, were equally responsible for the problems of criminality that confront our planet.  The ultimate threat of global warming is a direct consequence, as vegetation is reduced to boiling desert over vast areas of the globe.

While these Wall Street slickers think only of their margins and their bonuses, their greedy and irresponsible actions have been the material cause of misery and deprevation for millions in Malaysia and to further billions of people across the world as the story of 1MDB has been duplicated elsewhere.

And yet, what these powerful city slickers have been telling the rest of us time and again – funding think tanks, media outfits and politicians to do the same – is that the answer to these woes is less regulation of banks and more privacy for the super rich who hide their secretive gains through the off-shore banking system.

It is time the forces of law and order moved in to reveal the criminal motives behind so much of banking secrecy and politicians must respond to increase transparency and proper regulation to protect the rest of us from bonus hungry Wall Street sharks, who have willing to take as their clients some of the world’s worst thieves and criminals on the basis they thought they would never be caught.

It took five years, but it seems that the attention of the US regulators has been well and truly drawn to what happened at 1MDB, presenting an unprecedented opportunity for irresponsible financing to be seen to be properly punished and for those reforms to begin.