Treat With Caution The Tales From Tarek Obaid

The revelation by The Edge that five days before an interview arranged to promote the image of Najib Razak, PetroSaudi Director Tarek Obaid sent the journalist Jamal Khashoggi US$100,000 raises troubling issues.

Jamal Khashoggi was the Saudi writer who went on to work for the Washington Post and who was then brutally murdered earlier this year at the hands of Saudis believed to be working for the present Crown Pince. 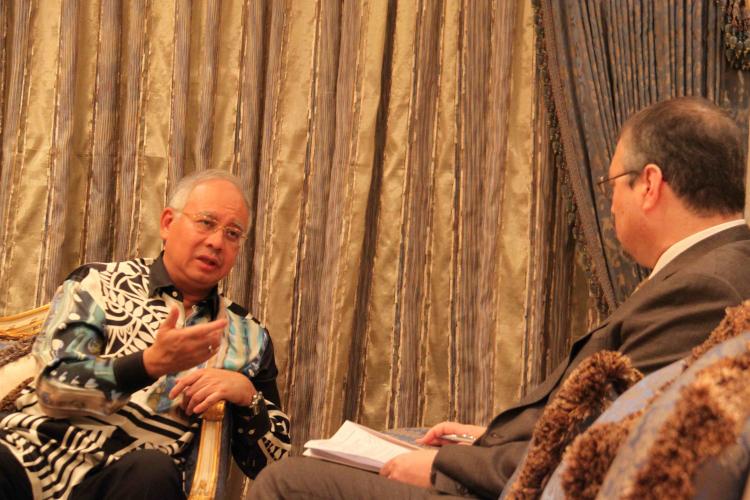 Khashoggi asked to be sent the photos taken of his December 2009 interview with Najib in KL, designed to promote him in advance of a visit to Saudi Arabia

Papers linked to the PetroSaudi database released by former director Xavier Justo reveal that Khashoggi was close to the faction in the Saudi Royal family around the former King Abdullah, which included the Obaid brothers.

Tarek was a schoolfriend of Abdullah’s son Prince Turki and had started a number of shell companies together with the prince, including PetroSaudi, in anticipation of generating business out of the royal connection.

Tarek’s brother, Nawaf, who has accumulated various academic posts in western institutions, had obtained a civil service post in Saudi Arabia at the time, but was working extremely closely with Tarek and PetroSaudi to assist in generating that business and presenting favourable PR in the western media for business associates and political allies.

As Sarawak Report has previously detailed, Nawaf developed relations with a strong network of international journalists and intelligence experts, whom he primed with self-serving information – for which he appears to have been paid from PetroSaudi money acquired from the 1MDB bogus joint venture.

In emails to Jamal Khashoggi Nawaf refers to the newspaper editor as “Uncle J”.

‘Uncle J’ was doing favours for the Obaid brothers, who in turn were currying favour with Najib for money

In November 2009, just one month after PetroSaudi had banked a $300 million payment from 1MDB into the joint venture, Nawaf emailed ‘Uncle J’ requiring him to place a document “somewhere important in the paper”.

The document was a statement by Najib Razak expressing ‘solidarity with the people of Saudi Arabia’ against alleged attacks by Houthi rebels at a time when the new prime minister was working hard to curry favour with the kingdom: 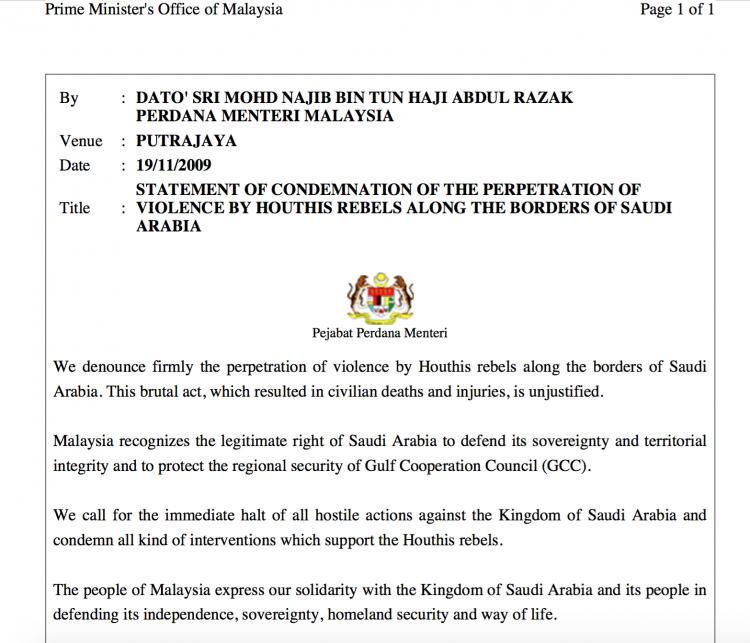 Najib was keen to curry favour with Saudi Arabia

Tarek and Nawaf Obaid appear to have taken a step further in their efforts to stroke their new Malaysian business partner in Najib via this route.  A month later they organised for Khashoggi to fly to Kuala Lumpur to do what is generally known as a series of “puff pieces” on both Najib and his self-promoting wife Rosmah.

Nawaf emailed his brother a biography of Khashoggi so that he could let Najib’s officials know just how important a journalist he was in Saudi Arabia at that time.

Jamal Khashoggi is Editor-in-Chief of Saudi Arabia’s Al Watan (The Nation) Newspaper, the Kingdom’s most popular paper and one of it’s largest

he wrote in an email forwarded to Tarek:

Nawaf fixed an interview with Najib by Khashoggi on behalf of Tarek, who emailed his bank to send Khashoggi $100k five days before hand

According to a communications with Wan Shihab, the Special Officer to The Prime Minister of Malaysia, it was confirmed on December 2nd 2009 that the interview would take place on December 14th in KL. On the same day Tarek wrote to his manager at Bank Saudi Fransi saying he needed to transfer USD100,000 to Jamal Khasoggi. 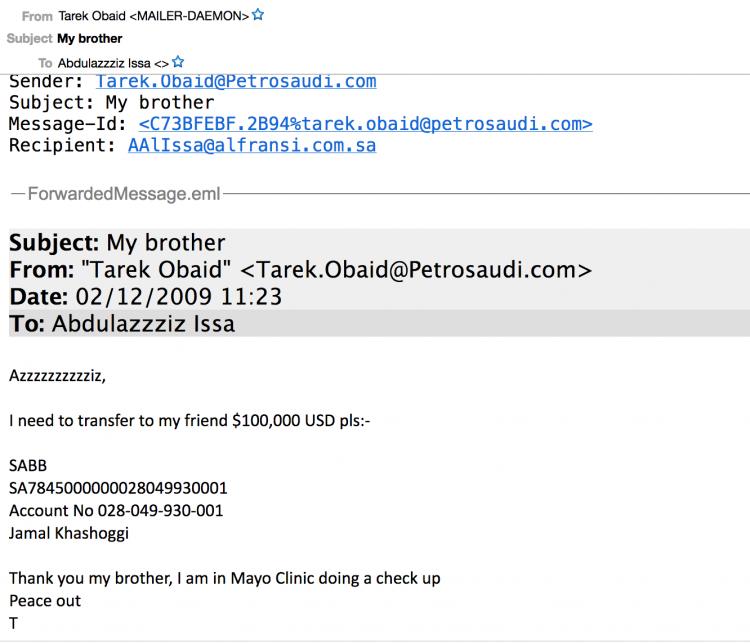 Tarek contacts his banker to send the cash

The employment of Mr Khashoggi in this context raises ethical issues. USD100,000 is off the scale in terms of normal freelance payments for a story – more than most journalists earn in a year.

However, Mr Khashoggi was not freelancing he was editing a supposedly independent newspaper and unless the interest is specifically declared (as, for example by describing it as an ‘advertorial’ or ‘promotion’) these sorts of articles ought not to be commissioned by their subject or their subject’s business partners, but rather by the paper itself.

It seems plain, unfortunately, that the Obaid brothers were arranging for Khashoggi to abuse his position as editor in order to slip a series of deceptive puff pieces into the paper to promote Najib and Rosmah, in return for this handsome reward.

The involvement of Jho Low in organising this deceptive PR campaign (by no means the first performed by Nawak Obaid for Najib) is evident throughout the document trail.  He was copied in on the scheme from the beginning and was sent in advance the softball questions that Jamal Khashoggi was primed to ask Najib by Nawaf and Tarek:

“Hey Bro” Tarek greeted Jho, before sending a list of questions “that Khashoggi will be bringing with him” including “Malaysia is a major anchor of the Muslim world, how seriously do you take this responsibility?” and a Last Question (Very Important) :
What is your assessment of the Saudi authorities management of the Hajj this year?”.

The PetroSaudi director ended by telling Jho Low, who has consistently denied any involvement in 1MDB and this joint venture, “See you soon”. [read full email below]

Here are the questions Jamal Khashoggi will be bringing with him:-

Importance of Malaysia to Muslim World :

1 – How central has Islam become to Malaysia’s developments and standing in the world?
2 – Malaysia is a major anchor of the Muslim World, how seriously do you take this responsibility?
3 – What are the recent domestic initiatives you have undertaken in Malaysia?

4 – What is the best way you would like Malaysia under your stewardship to be presented to the Arab world today?

Centrality of Saudi Arabia and a new “beginning” to a Saudi-Malaysian “strategic” relationship :

5 – How do you assess the Kingdom’s new-found global role today under The Custodian of the Two Holy Mosques, King Abdullah?
6 – Would you characterize your upcoming visit to the Kingdom as a new “strategic” beginning to relations between the two countries, and if yes, in what spheres?
7 – How is King Abdullah and Saudi Arabia viewed today in Malaysia?
8 – How can a potentially new Saudi-Malaysian “strategic” relationship help and hopefully stabilize the Muslim world?

9 – Does your upcoming visit to the Kingdom hold a special symbolic significance?

14 – What is your opinion about the global financial crises and what was your response to it in Malaysia?

15 – Do you have a special personal message to the Saudis before your visit –
a – Houthi rebellion in North Yemen.
b – Disasterous Jeddah floods.
c – Other personal ideas.

16 – What is your assessment of the Saudi authorities management of the Hajj this year?

As The Edge has detailed, the articles about Najib and Rosmah (paid for from 1MDB cash) were specifically designed to polish their image in Saudi Arabia, Malaysia and elsewhere.

An email marked ‘confidential’, written by Tarek Obaid and sent to Jamal Khashoggi as well as Jho Low, thanked Khashoggi “very much for taking time out of your busy schedule to fly to Kuala Lumpur and meet the Highly Esteemed Malaysian Prime Minister to interview him for the potential planned visit early next year to Saudi Arabia”.

The email went on to outline what Obaid described as ‘A Potential Domestic Media Strategy for the Malaysian PM':

The main objective of the interview is to give maximum exposure to the Prime Minister, his ideas and initiatives before he visits the Kingdom and doing it through you is by far the best way to ensure that it happens in a professional and systematic manner.

The proposal was for Khashoggi to provide a major front page interview, plus a smaller interview with Rosmah followed by a series of two or three editorials to be written by Khashoggi.  Tarek ends by saying “using your very influential name and writings in the domestic market will make a big difference on how widespread and successful this media project will ultimately be”

Thank you very much for taking time out of your busy schedule to fly to Kuala Lumpur and meet the Highly Esteemed Malaysian Prime Minister to interview him for the potential planned visit early next year to Saudi Arabia to meet The Custodian of the Two Holy Mosques, King Abdullah bin Abdulaziz. The main objective of the interview is to give maximum exposure to the Prime Minister, his ideas and initiatives before he visits the Kingdom and doing it through you is by far the best way to ensure that it happens in a professional and systematic manner.

With this in mind, I have a “mini-media plan” for this project :

1 – A Major Front Page Interview with His Excellency the Prime Minister laying out all the messages and ideas that HE would like to convey to the Saudi leadership and people with the questions and points that you think he should also address to be in tune with the local Saudi domestic sensitivities and requirements.

2 – A Smaller Interview with the wife of the Prime Minister to highlight all her Islamic charitable works for the poor in Malaysia and beyond. This will be very interesting to the Saudi ladies that are involved in charitable works all over the Kingdom, especially in-light of the Jeddah floods. Furthermore, demonstrating that the wife of the Malaysian PM is so involved in Muslim causes will only re-enforce the bonds between our two respective countries.

3 – A Series of Two or Three Editorials Written by You over a specific period of time on your visit to Malaysia to depict the growing importance of Malaysia to the Muslim world (and Saudi Arabia of course), on the Prime Minister’s domestic and regional policies and on anything else you deem would be of interest to the readers and local opinion contributors.

And finally, using your very influential name and writings in the domestic market will make a big difference on how widespread and successful this media project will ultimately be as the visit of the PM to Riyadh becomes closer.

Please, accept the assurance of my highest esteem.

Khashoggi’s close ties to the Abdullah faction in Saudi Arabia, including Tarek’s then co-shareholder and director of 1MDB Prince Turki, undoubtably played into his problems with the successor regime, forcing him into exile. His outspoken criticism of the current Crown Prince is believed to have been the reason behind his appalling murder.

A long article in the Washington Post last week detailed this rivalry between different branches of the Saud family that clearly largely relied on extensive testimony from the two Obaid brothers. The narrative kicks off with a reference to Tarek’s claim he was arrested in China (where he went to visit Najib and Jho Low) at the behest of the Saudis:

As the tension increased, the royal court around Mohammed bin Salman, the new king’s favorite son, even dared to try to kidnap a member of the Abdullah faction in Beijing in a brazen operation in August 2016 that reads like a chapter in a spy thriller.

The article balances the claims of victimisation by the Obaids with clear references to the power-grabs attempted by Prince Turki himself, who remains in a Saudi jail on corruption charges. The article also makes clear that Tarek Obaid is being investigated over 1MDB.

Nevertheless, journalists seeking ‘expert input’ from the likes of Tarek and Nawaf Obaid should also keep in mind their history of giving and taking money for media manipulation, including, it has now become sadly apparent, in their dealings with Jamal Khashoggi.