In a surprise move, the Abu Dhabi fund came out to fight its corner in what now seems set to become an epic global legal battle over Malaysia’s missing billions.  The United States Government has already filed charges against two Goldman employees for conspiracy to defraud 1MDB and bribe officials and Malaysia has sued IPIC in the UK courts to reverse a settlement against 1MDB which it says was part of the fraud.

However, the move on the part of IPIC itself opens a whole new front, directly accusing the whole bank of being party to a “massive global fraud” to bribe its own officials in the course of defrauding 1MDB.

The damning accusations name for the first time one of Goldman’s most senior and prominent partners, Andrea Vella, who was laid off by the bank just two weeks ago, and IPIC alleges the entire bank was caught up in deliberate fraud, something already alluded to in the separate case brought by the Department of Justice.

The move against Vella, could cause matters to unravel dangerously for Goldman Sachs, given Vella’s connection to another highly contentious case, which the bank recently managed to win against the Libyan Investment Authority, which had also accused its  operatives of likewise seeking to defraud that country’s investment fund.

Vella was the line manager of Southeast Asia boss Tim Leissner, who pleaded guilty to all of the Department of Justice’s charges last week and admitted he acted corruptly together with the complicity of several others at the bank.

Sarawak Report is aware of possible plans already to potentially challenge that UK court judgement in Goldman’s favour on the basis of the new evidence against Vella. That could open attacks on multiple fronts, piling up the prospects of potential fines.

Over the past few days the bank’s stock has already slumped 14% and it has been downgraded by its rival Morgan Stanley.

Talk of ‘a few bad apples’ and of the bank being ‘fooled’ by Najib’s wily 20 year old proxy Jho Low appear to be cutting no ice.

“It is unclear how long the issue will take to resolve, what the fines and penalties could be, and what costs Goldman Sachs will subsequently incur to satisfy any demands from regulators. These risks, coupled with potential headline risks in the coming months (additional lawsuits, additional regulatory probes, internal reviews), drive our Equal-weight rating.” [Morgan Stanley analyst Betsy Graseck to CNBC].

The new action has at least clarified the positions different players are taking in the battle line up.  Malaysia has sued to reverse its settlement owing to fraud at IPIC.  Whilst IPIC in defending that settlement is also now proceeding against its two allegedly corrupt employees Chairman Khadem al-Qubaisi and Mohamed al-Husseiny for  taking part in the fraud, as well as Goldman Sachs for allegedly orchestrating the whole event.

It’s put paid to talk that Khadem al-Qubaisi, who was known to be extremely close to IPIC’s royal boss, Sheikh Mansour, has been rehabilitated.  And whereas the Department of Justice’s criminal indictments are currently directed at two Goldman Sachs individuals only this IPIC suit directly charges the entire bank as agents of fraud:

This action seeks redress for a massive global conspiracy on the part of the Defendants to defraud and injure Plaintiffs….

Goldman Sachs and others engaged in a massive, international conspiracy to embezzle billions of dollars from 1Malaysia Development Berhad (“1MDB”), Malaysia’s investment development fund, and to launder the proceeds of that theft through New York and elsewhere. As part of the scheme, Goldman Sachs conspired with others to bribe IPIC’s and Aabar’s former executives, Defendants Al Qubaisi (the former Managing Director of IPIC and Chairman of Aabar) and Al-Husseiny (the former CEO of Aabar), to induce them to join the conspiracy and act against the interests of IPIC and Aabar.
In exchange for the bribes paid by Goldman Sachs and its co-conspirators, Al Qubaisi and Al- Husseiny agreed to manipulate and mislead IPIC and Aabar, and to misuse the companies’ names, networks, and infrastructures to further the criminal schemes and to personally benefit.
Goldman Sachs, Al Qubaisi, Al-Husseiny, and their co-conspirators at IPIC’s and Aabar’s expense. IPIC and Aabar expressly reserve the right to name additional individuals and entities as defendants. 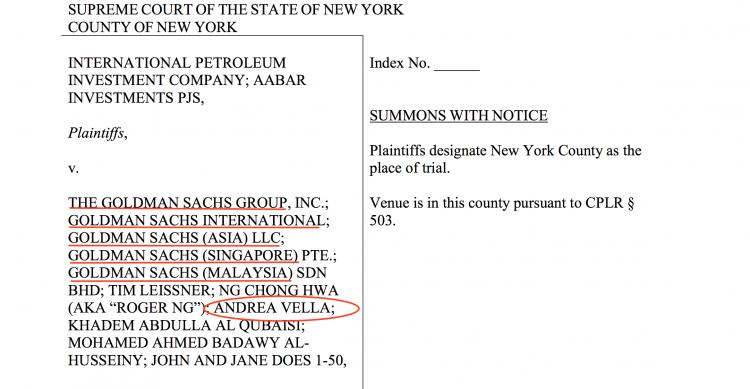 This court battle will take place across two separate jurisdictions in the US and the UK as all parties seek to present themselves as injured. However, Sarawak Report, which has faced countless separate legal attacks for pointing out matters in plain sight over the course of exposing 1MDB, questions why these realisations, investigations and discoveries appear to have been so belated?

This blog highlighted the unsavoury aspects of the Goldman Sachs profits from 1MDB’s bond deals in July 2013; we highlighted the strange announcement by Mohamed al-Husseiny that he was the funder of the Wolf of Wall Street in August 2014 and together with several opposition critics raised concerns about 1MDB throughout 2015, yet it has taken till now for the major bank and wealth fund to apparently wake up to the fraud.

Therefore, this blog suggests no further time should be lost in fully examining the detail of the earlier 2011 Goldman Sachs issued $1.6 billion Sarawak State ‘Equisar’ bond, raised through Labuan ostensibly to fund SCORE.

It is now acknowledged in the various indictments that the alleged conspiracy by Leissner and his fellow fraudsters began in 2009 with relation to their Malaysian activities, bringing this enormous and unusual instrument well within the purview of the matter.

Sarawak remains the elephant in the room when it comes to tackling the corruption behind 1MDB and the Goldman bond stands out as the best key to unlock that door.