Time For The Wall Street Journal To Speak The Truth About Their Source?

Quite rightly, the Wall Street Journal, like other news outlets would not wish to divulge a source.  Possibly, this is why if you were to search The Sarawak Report in their coverage you would find this blog is not mentioned once.

However, when The Sarawak Report made an offer to the writer Tom Wright, back in late June 2015, to introduce his colleague to one of its own sources in London and to provide documents detailing the transfer of $681 million dollars into Najib’s bank accounts, he agreed he would in return mention Sarawak Report in the article he wrote using those documents.

That is not the only pledge he broke.  He also said he would continue to contact the source through Sarawak Report and not attempt to go behind Sarawak Report’s back. Far more importantly, he also promised that he would not reproduce the documents themselves on his website, because the source was fearful that showing the documents would point to who they were.

Nevertheless, shortly after the original story Wright did put those documents up on the WSJ website, despite that promise, causing great fear to Sarawak Report’s source, many of whose colleagues were indeed arrested shortly after, in a search for the leak. As a result, that source did not approach Sarawak Report again.  However, we have reason to believe that using their continuing access to Malaysia (Sarawak Report was by then facing charges and could not enter KL) the WSJ team were able to reopen connections with that source and run more stories based on material they provided.

“Let’s leave out Sarawak Report, you are talking to the Big Boys now”

is how one intermediary to the source said Tom Wright put it having called him directly (despite pledging not to) after the original story on Najib’s bank account went out simultaneously on Sarawak Report and the Wall Street Journal.

Which Version Is True?

According to an article in Malaysiakini last week, the Wall Street Journal book now claims a very different series of events led to their obtaining the documents on Najib’s account.  The article details how the source had apparently been so impressed by Wright’s earlier reports on 1MDB (written after Sarawak Report had broken the original scandal) that they contacted him directly by email under an account called “SaveMalaysia” and offered the material.

According to Bradley Hope and Tom Wright in their book The Billion Dollar Whale, Malaysian investigators turned to them after they (the American journalists) had published an article in The Wall Street Journal (WSJ) that detailed how Najib allegedly used 1MDB as a slush fund. “That story caught the eye of an intermediary for the (Malaysian) task force. A few days later, a Malaysian source met Simon Clark, a reporter with WSJ in London, to confirm the veracity of the documents – which the intermediary handed over hours later. Sarawak Report also received them. The files, copies of wire transfer documents into Najib’s accounts as well as money-flow diagrams produced by the task force, were explosive,” the book states.
Interestingly, the Malaysian sources of Hope and Wright had passed them encrypted computer files that could only be unlocked with the password “SaveMalaysia”…..
[Malaysiakini]

The article says that Wright in his book acknowldges that Sarawak Report also ran the story at the same time, but gives no explanation as to how that could be.  The WSJ is part of the Murdoch empire and colleagues at a sister publication The Australian seem equally confused. 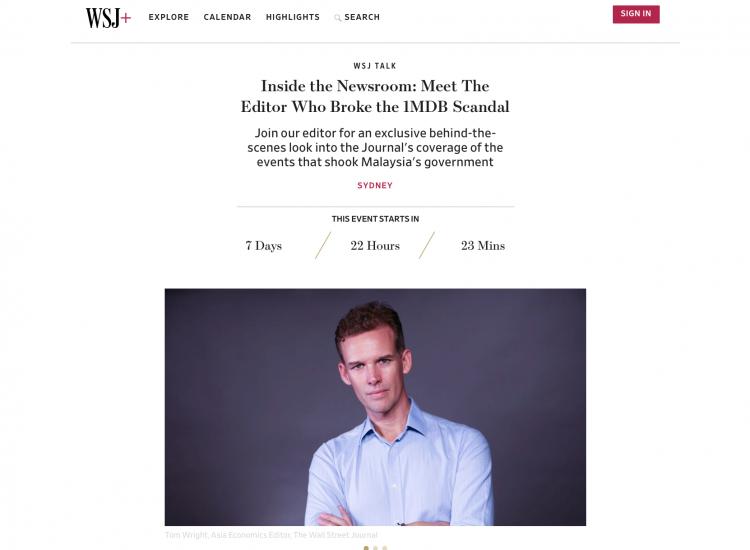 The Wall Street Journal itself is making the claim

When the intermediary read the Malaysiakini article last week their comment to Sarawak Report was “Bloody Liars”.  Furthermore, the actual journalist, Simon Clark, who was introduced in London to the source and then to the intermediary (who passed the actual documents) has informed Sarawak Report that what he remembers of the event is no longer what he is told by his colleagues happened.

Tom Wright may not be aware that when Sarawak Report’s editor made the decision to share the information on Najib’s accounts with the WSJ and sent him an email to that effect she was in the company of a senior and respected Malaysian newspaper figure, who witnessed how she sent the email to Wright and then received a call back from him just minutes later, extremely interested in the story.  That senior newsman therefore knows perfectly well that the account as it is detailed in the Malaysiakini article is therefore false.

The email SR sent to Tom Wright in late June 2015, which had him on the phone within minutes. It referred to the material on Najib’s bank account, which both outlets published early in July

Sarawak Report shared that story and documentation on Najib’s bank accounts with the Wall Street Journal in order to give the story more global attention and to make it harder for Najib to ignore than if it had come out only in this Malaysia focused blog, which was already under enormous attack from his government.

Today, Tom Wright has indicated in another article reported by Malaysiakini that he is now expecting to option his book about 1MDB to make a movie, something that is already planned by Sarawak Report.

Therefore, this is undoubtedly the time for himself and his colleagues at the WSJ to clarify what he is saying publicly about how he got the story on Najib’s bank accounts. Is what was reported by Malaysiakini correct in that Wright is claiming that the source contacted him directly or does he admit in his book that Sarawak Report handed him the story?

Since Tom Wright has never directly contacted Sarawak Report again since the day he published the item in the Wall Street Journal (for which he received the Asian Journalist of the Year award) but instead contacted the intermediary to suggest in future to leave out Sarawak Report on further stories, Sarawak Report itself is not in a position to give the answer.

Neither have we so far been able to obtain a copy of the book (in Malaysia at least) and would not dream of reading the viralled WhatApp version, which the authors allege is incorrect anyway.  Tom Wright owes Malaysians (few of whom have access to the book) his version of how he got the Pullizter Finalist shotlisted story.