COMPLAINT BY THE SULTANAH OF TERENGGANU

With regard to the complaint by the Sultana of Terengganu, Sarawak Report is happy to clarify that the passage in the book The Sarawak Report does not in any way suggest that the Sultanah was “in a conspiracy” with Jho Low or “involved in government administration in the 1MDB affair’ or that the Sultanah was in any way personally connected with the Terengganu Investment Authority (of which her husband was chairman of the advisory board) let alone 1MDB.

The book does relay information that Jho Low boasted of mixing socially with the royal family and herself and, as with many of his business ventures, cited his social connections as opening doors to opportunities, such as his obtaining an advisory position on the TIA.

We note that the connection between Jho Low and the Terengganu royal family was in fact far closer to the sister of the Sultan, with whom Jho was directly connected in a business sense, and her husband, and on this basis later print runs of the book have have removed the reference to the wife of the sultan and instead refer to the sister of the sultan as being Jho Low’s prime social connection in Terengganu.

However, in neither case does the book suggest impropriety on the part of such contacts of Jho’s and nor do we suggest that Jho’s engagement as an advisor of the fund was in itself a corrupt act. What was corrupt was the later theft of money from 1MDB, which was after the fund had been transferred from the purview of Terengganu altogether and had evolved into 1MDB.

We therefore suggest that offence has been taken for something that was not implied. Furthermore, if the Sultanah says she does not remember meeting Jho we are happy to accept her position on that. Her sister in law most certainly did, but we do not imply either here or in the book that there was impropriety in that relationship either.

We suspect this matter has been deliberately misinterpreted to the Sultanah by people seeking to cause trouble and assure her that a careful reading of the short passage should make it clear there is no allegation made against anyone in the Terengganu royal family regarding the 1MDB affair, which took place after any involvement by the state ceased in that fund. We are sorry if she has been upset by any misinterpretations of our meaning and trust this clarifies the matter. 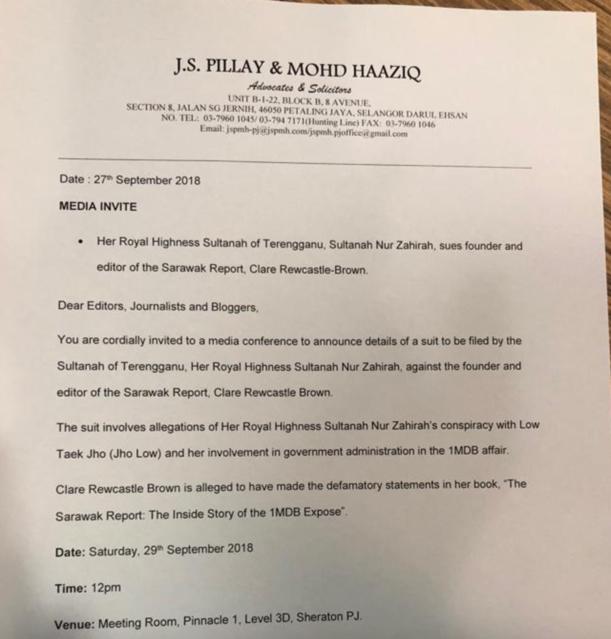 Announcement by the Sultanah’s lawyers