Anwar's Message To The UK - Support Our Democracy And Help Us Get Our Cash Back!

Anwar Ibrahim met up with some of his most sturdy supporters from the British parliament at Westminster today (Tuesday), who had come to celebrate his freedom and return to politics.

Foremost amongst them was the current Labour Party leader, Jeremy Corbyn, who consistently spoke out in support of Anwar and human rights reform in Malaysia over several years.  Also, Ann Clwyd MP, who issued a number of questions to the Foreign Office in recent months, questioning the imprisonment of Anwar and Najib’s oppressive legislation, such as his National Security Act and ‘Anti-Fake News’ law.

Yet, whilst he thanked these politicians for speaking up for democracy in Malaysia during recent hard times, the new prime minister designate delicately expressed his opinion that official British support for himself and other campaigners for reform had been markedly low key, particularly as he languished in solitary confinement.

Listeners were well aware that throughout the period the UK instead pursued a policy of close contact with Najib, whom the Foreign Office had apparently deemed untouchable.  It was a policy that resulted in a number of massive investments in the UK by Malaysian government-linked funds, such as EPF and PNB, some of which are now being questioned as potentially dubious, given the rampant corruption surrounding Najib.

Yesterday, Anwar had reportedly raised these matters in a meeting with the Foreign Secretary Boris Johnson. As the previous Mayor of London, Johnson had turned the earth on what has become the capital’s most expensive ever development project at Battersea Power Station, together with Najib himself and then UK prime minister, David Cameron. 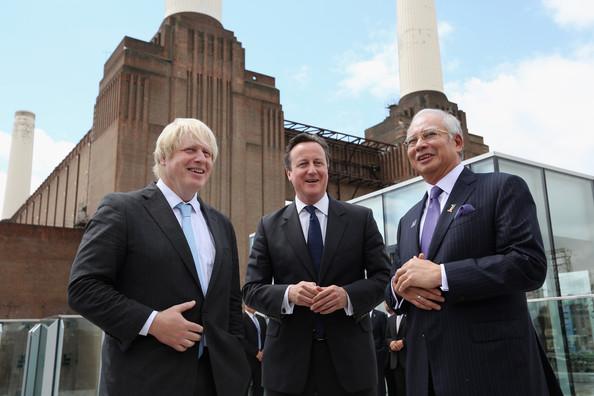 July 2013 – launch of the Malaysian backed redevelopment of Battersea

However, as the price tag has risen to over £1.6 billion (RM9 billion) on the project Anwar has insisted that the British must now assist fully in investigating the details of this investment and also to help Malaysia regain billions of losses owing to corruption such as 1MDB.

“Britain is an important ally and great friend of Malaysia and we are continuing to do [trade and investment] but certainly we want their full support to help investigate for us to regain the billions of losses back to the country.”

Introducing Anwar, Ann Clwyd said his brave ordeal and imprisonment were an inspiration to all:

“I am particularly delighted to be able to introduce you today as a free man – after you have been fully pardoned and released from prison, following the surprise victory of your Alliance of Hope coalition in the Malaysian general elections last month. You never gave up – and neither did we – and you are now back at the forefront of Malaysian politics – to change your country for the good of all its citizens.

And out of your personal suffering and unwavering commitment will no doubt come a deep understanding of the plight of many in Malaysia – who have felt for far too long ignored, marginalised and/or repressed.  I think all of us here today therefore have a lot of hope that things will now at last get better in Malaysia.

Of course, given the challenges you face, particularly in the aftermath of the 1MDB Scandal and the restriction of many basic liberties by the previous Government, we realise this won’t be an easy task.  But we will continue to support you until you are able to implement the human rights commitments set out in your coalition’s election manifesto.”

Anwar replied that this was not the time for bitterness about what had happened and the priority is Malaysia’s future.  He said he too is aware of the importance of acting fast to secure Malaysia’s new democratic progress.

This is the time, he pointed out more than once, for champions of democracy such as the United Kingdom, United States, Australia and Europe to strongly support South East Asia’s new recruit to their shared democratic values.  What is most needed, he stressed, is support for the Pakatan Harapan government in its quest to build strong institutions to defend those values as quickly as possible.

“This government came on a clear platform of reform. The judiciary must be fair and the media must be free. Draconian, repressive laws must be revoked… Mahathir and I, now we are a team and we won on that platform and we will not shirk. Malaysia must transform to a mature democracy, must be just. We must rid the country of any trace of fanaticism, any purveyors of violence.

Anwar acknowledged that there had been many promising revolutions that had given rise to disappointment. He does not want there to be any neglect of Malaysia over avoiding such an outcome.

I appeal to the UK authorities, to the States and Australia to support the strenghtening and solidifying of the institutions of democracy. It is not easy to transform a judiciary which has been blatantly corrupt and compliant of the executive.  The mistake by many western nations is that while there is euphoria, ‘we are very happy for you’ [you then do nothing].  Here is a success story, here is a transformation that is commendable… but nothing is certain. It is still new, it is still fragile, so countries who are friends of democracy must assist in strengthening the institutions.  Malaysia is not a poor country, we are not asking for funds to help for food or shelter, but we need support in trying to strengthen the institutions of democracy”

It was a plea for Malaysia to receive just recognition, engagement and encouragement from the democratic family of nations in response to its huge achievement in managing peaceful transformation through an election – and it was well received today by supporters in Westminster. 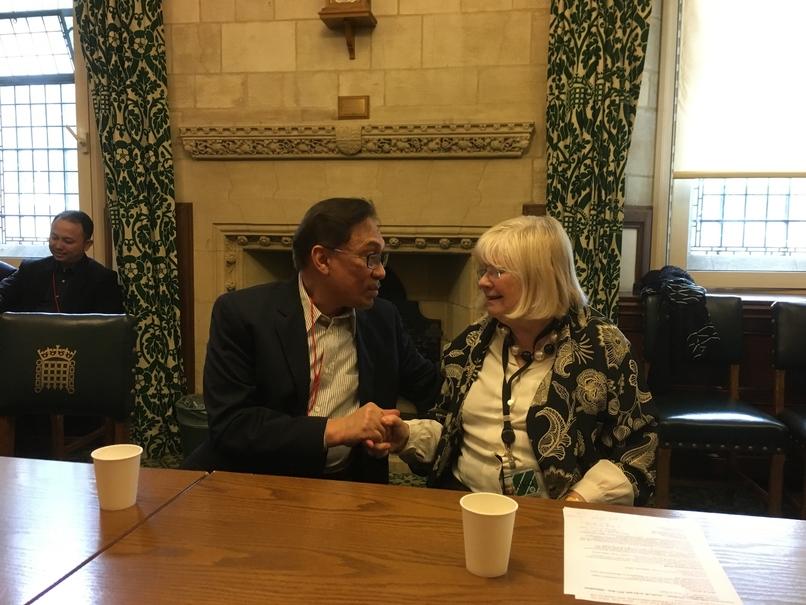