Whither Sarawak As CMSB Nosedives?

According to Bernama, the present Chief Minister of Sarawak, Abang Johari, has confirmed that the Editor of this website is still banned from entering the state.

He has not yet made up his mind whether to revoke a ban slammed on the writer, along with a number of prominent agency journalists back in 2008, after they visited Penan blockades protesting against the logging of their indigenous lands.

Perhaps the sense of threat in the minds of the leading party PBB and its BN allies as they contemplate how to respond to the changed political scene, is related to this week’s release of a statement by the state’s largest conglomerate CMSB, largely owned by the family of the Governor Taib Mahmud.

CMSB’s shares went into a nosedive on Friday as the likely implications of proposed anti-corruption reforms on the favoured position of this company sank in with shareholders. Those shareholders fled, showing a plunge of prices after lunch of 30%, before trading was suspended to stem the panic.

Explaining the shameful event, the CEO of the company, Isac Lungan, could not have been more frank in his view that revelations over the years by Sarawak Report could affect the profitability of the company in a new cleaner ‘reformasi’ environment.

In a management note to investors he said the catastrophic collapse had been caused by factors, of which the first was the combined effect of the Bruno Manser Fund offer to release research first published on this website and also the decision of the federal government to unblock Sarawak Report, which has articles spanning a number of years covering corruption in the state, including its largest company. 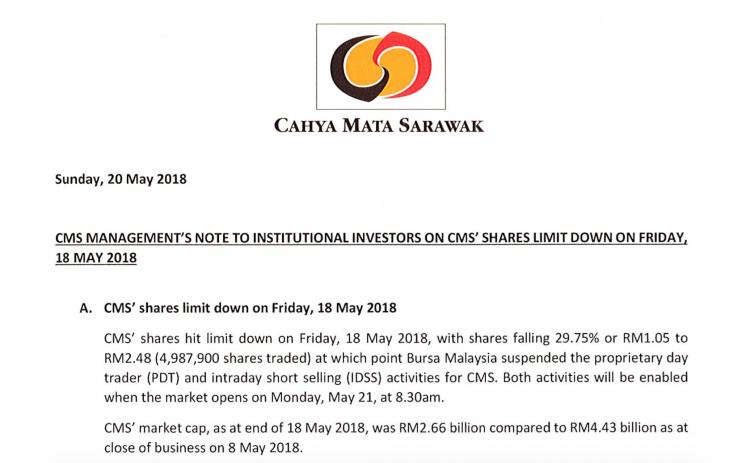 “The following in our view, has led to the steep sell-down:

1.  Bruno Manser Fund’s offer to share information and unblocking of Sarawak Report website:
Possible reaction to an article carried by the Star Online portal stating that the Bruno Manser Fund (BMF) is willing to share information with the new Pakatan government on the Tun Taib family as a basis for reopening of investigation.
This followed a report on Thursday 17 May 2018 that news portal Sarawak Report, which has been known to release anti Tun Taib family (as well as anti-CMS) related articles, has been unblocked. The Sarawak Report website was blocked by Malaysian Communications and Multimedia Commission (MCMC) in 2015. The news they publish is now widely available for the general public to access, including reports portraying CMS negatively.”

The statement, which then goes on to list various other anti-corruption demands issued by opposition MPs in the state as being further threats to the company, is a open acknowledement that CMSB does not see itself as being in a particularly strong position to refute criticisms of cronysm and corruption with regard to the Taib family connection.

Otherwise, the threats of a small NGO and reappearance of a small online portal would not  create such a devastating impact.

Johari Cannot Make Up His Mind?

What the admissions of CMSB and the waverings of Abang Johari prove is first that Taib still holds a continuing grip over business and politics in Sarawak and second that the present Chief Minister and his PBB followers have not been able to make up their minds about whether to throw their lot in with the new guys in charge in KL or to cling to the crumbling BN coalition, which still holds sway in the state government.

It is weak and vacillating behaviour that will not impress local voters, who will be entering state elections in the next couple of years or so. Admitting that he has yet to formulate a position on such a crucial matter as whether or not it supports the new federal government has revealed Johari to be every bit as stunned and indecisive as Najib was on election night.

The longer this Chief Minister fails to make up his mind about the political direction of the state that was once known as BN’s ‘safe deposit’, the less safe that ‘deposit’ is likely to remain.

As for Taib, much in the way that Najib railed against Sarawak Report over 1MDB, claiming dark plots and plans for an ‘overthrow of the state’, the former Sarawak Chief Minister had responded equally disproportionately and irrationally after he lost the urban vote in 2011, largely because of devastating corruption allegations online, followed up by opposition progress in the 2013 general election.

Not long after that disappointing election, Taib had marched into the state parliament and singled out Sarawak Report along with other NGOs as a dangerous force. He accused the website of seeking to overthrow the state and of malicious slander ‘poisoning the minds’ of the ‘simple people’.  The raging CM even went so far as to suggest that SR’s motive involved a plot to re-colonise Sarawak and to steal its remaining oil revenues!

It was following this somewhat unhinged and disproportionate rant that Najib apparently saw his chance to remove Taib from the position of absolute power that he had held as Chief Minister, Finance Minister and Planning Minister of Sarawak for over three decades.

It was no secret that his power and wealth irked the new Prime Minister, who nonetheless used him as a model for his own subsequent pillaging of public coffers.  Taib was booted upstairs into the Governor’s mansion on a vague understanding that it brought immunity.

What Do The People of Sarawak Want?

As they weigh up their best options for the future Sarawak’s ruling parties ought not to be placing a priority on the perceived dangers of incomers, such as SR, BMF or civil rights and reform campaigners from Malaysia.

Sarawakians have access to information and can form their own opinions with or without such visitors these days.  The Chief Minister needs to listen to what people are now asking in the coffee shops or commenting online.  There has been very vocal concern from the moment of the election that the state could yet again be left out of the progress that is now sweeping federal changes.

People want to know if the programme to root out of corruption and open up of freedoms will reach their state and Abang Jo needs to finally get off the fence and decide if he can afford to ignore that yearning.