Unfolding Drama As Reality Sinks In For Najib

Bouyed up by the public holiday and euphoria over their miraculous peaceful transition out of tyranny, Malaysians have been treated to a classic end-of-regime sequence of events over the past hours – all of it without a slap, let alone a shot fired.  It has made for compelling drama and very little time to sleep.

Barely a moment has passed without a new, gob-smacking development to savour, as the tyrants have toppled like nine-pins.  Gasps of anxiety have been followed by cheers of relief, as the forces for good have prevailed time and again over the plots of strongmen, prepared to resort to any measure to stay in power.

The dastardly manoeuvres to snatch back the State of Sabah by the grotesquely corrupted Aman brothers lasted just a few hours.  Another set of brothers had reminded voters of their penchant for betrayel and leap-frogged over to prop up Musa, leading to marches in the streets.

Musa would have done better to have run instead.  Once frogs start jumping they can go in any direction and the Sabah BN component parties soon saw where the wind was blowing. They hopped over the other way to Harapan and there were sighs of relief all round as the Warisan leader was called back by the Governor to form the state government after all.

Musa has just seriously added to the list of crimes that will be prosecuted against him in due course – unlikely he can travel anywhere anymore.

But the most nail-biting series of events surrounded the fate of the duo in in KL.  They too would have done better to run – at latest Wednesday night. However, Sarawak Report has been informed by insiders “There was no Plan B”.  Rosmah and Najib had not realised they could lose and when they did they still believed that they could defy the odds and claw back power, as they have before so often.

Reality does not appear to have sunk in until AFTER the dismal UMNO anniversary ‘celebration’ on Friday night, where Najib was apparently surprised to learn that several of his party dared to think it was past the moment to resign.

Witness his astonishing and treacherous ‘concession’ speech the previous day, which had turned out to be anything but. With just 79 seats left (plenty of them contested owing to obvious cheating) this ex-PM was still trying to call the shots and allege that the victory of his opponent was insecure.  Behind the scenes he tried to play the rulers to block Mahathir.

Popular outrage prompted the army and police chiefs to tell these foot-draggers to accept the realities and abide by the constitution.  It was only after Mahathir was sworn in on Thursday night that Najib seems to have gained a sense of his situation.  Perhaps it was at this moment that he rang his friend Peter Sondakh in Indonesia and asked if he would send a private jet to get him and Rosmah out?

The latest information is that Rosmah’s favourite daughter Nooryana had likewise booked flights into Jakarta with her Kazakh husband to arrive the same moment: 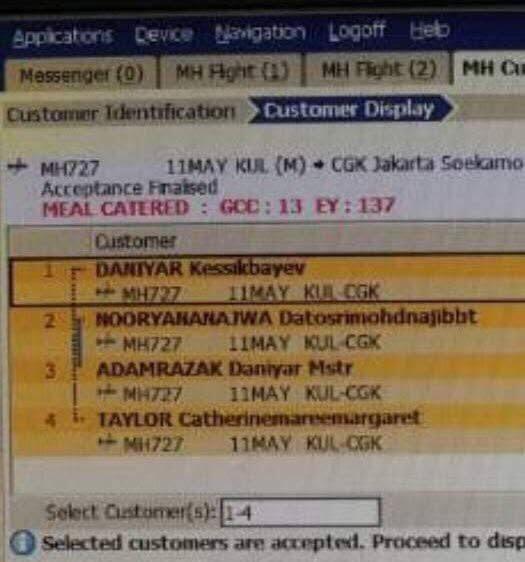 Leaving 11th May to arrive in Jakarta around the same time

Sondakh certainly owed Najib the favour. Sarawak Report and others have reported on one of BN’s most egregious scandals, which has been the use of hundreds of millions from the FELDA settlers’ fund to bail out the tycoon’s dodgy Eagle Plantation for at least double its actual worth.

But, how did Najib think he could get away with it so late in the day?  Plainly, he had woken up long after the rest of Malaysia had smelt the coffee over the demise of UMNO.  The news of the flight manifest found its way into the hands of PKR activists within no time and soon news organisations and social media, including SR, were alerted to the issue.

News of Najib’s planned escape, timed for a 10am take-off the following day, went viral and once again it was popular determination that made the outcome of these nerve-wracking developments, in restrospect, inevitable. They were assisted by Malaysia’s newly liberated and unshackled news media, which has been joyfully doing its proper job at last, covering events even-handedly as possible and accurately, without fear.

At first, since they could not deny being caught in the act, the couple issued a statement to say that they had only been planning a little holiday for a couple of days, whilst Najib drew up the list for his opposition line-up.

They would be back next week, the couple assured. Fat chance!

The authorities seemed too slow and indecisive at first.  Were there suspicious signs that Najib still had his allies in key decision-making roles, people wondered?  The immigration department’s online access suddenly went down inside Malaysia and enterprising journalists had to call up sleuths abroad to track down the PM’s travel status.

At first, relief.  The couple had been blacklisted (orders of the new PM).  However, mysteriously, as dark drew in, their names evaporated from the list – they were free to travel after all.  The nation spoke with one voice – Najib must not be allowed to leave!

Hundreds of people even took themselves down to the airport to vet arriving passengers overnight – one couple only in their sights!

The population watched, sleepless with bated breath…. then names of Najib and Rosmah returned onto the blacklist; police took over the job of vetting arrivals at the airport; the new Prime Minister confirmed that he had ordered the couple must not leave the country (pending serious matters being investigated) and the ex-Prime Minister issued a statement to say that he respected the decision of the authorities to ban his travel.  Phew!

The over-arching triumph of these extraordinary, historic events has been their peaceful nature.  Malaysia has provided a magnificent example to the world and to countries round about that enormous changes can be achieved without violence or hatred as a nation has united around a single purpose, to return the rule of law.

No one could have doubted the determination of the people to see their will carried through.  The numbers were there and the will to move solidly onto the street if needed, but that was enough.

And the worst fears were never realised.  There were no Red Shirts or angry communalists or fist fights – everyone had got the message, since the people had spoken across races and religions, in favour of a leader they could trust.

There await plenty more episodes to watch around the demise of UMNO’s power couple. A thousand cover-ups to be unravelled and billions of dollars to be unearthed – handbags, diamonds, will all come tumbling out. But, the danger is now over – Najib is gone.

The thieves of UMNO have meanwhile done their nation one big favour. They, like the people, have acted with dignity and restraint. There has been no violence and the people are too happy to be churlish.  The new PM has called for orderly transition and the rule of law.  No need for abitrary actions. This has been democracy in action.