People hate a corrupted government.  This was the point which Najib was making to Sabah Chief Minister Musa Aman as he started trying to push him out of office in 2014 – having already side-lined Taib Mahmud next door.

Then the spotlight swung to Najib himself and the Prime Minister has instead found himself relying on the comradeship of fellow villains.  The Aman brothers from Sabah in particular, alongside the Yusof brothers from Sarawak, have become the PM’s most stallwart allies as BN throws its all at GE14.

The position of these local potentates was thus cemented in the BN hierarchy of kleptocratic cronies and for the past three years Musa has remained king of an inpregnable castle in his local kingdom.

However, people have memories and they also have eyes and now they have a chance to vote.

It was Sarawak Report that took up the investigations into Musa Aman back before the 1MDB scandal broke and whilst cover-ups were in full swing over the shenanigans surrounding Michael Chia, revealed as Musa’s bag man by the Hong Kong authorities. 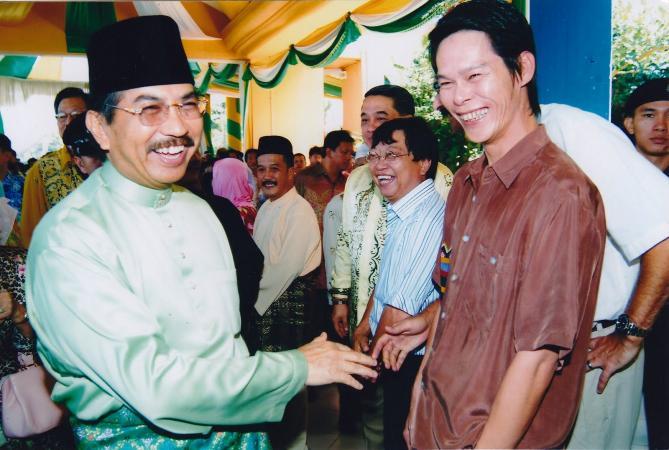 People can recall that Musa originally acquired his fabulous wealth and extraordinary power by combining two offices, one public and one political. He was both Chief Executive of the Forestry Department (Yayasan Sabah) and local Treasurer of UMNO at a time when most of the state’s fabulous jungle region – home to many indigenous peoples – was obliterated by logging.

During that same period he and his family became exceedingly wealthy and his party UMNO likewise acquired seemingly unlimited funds to buy their way into office, even to the extent of bribing opposition members to change sides after they initially lost elections.

It has been a truly galling experience for the people of Sabah to vote for one party, only to see their elected representatives hop over to UMNO, paid by money extracted from their homelands. Did Musa think they would forget this?

Sarawak Report spent much of 2012 working on the evidence surrounding Chief Minister Musa Aman’s multi-million dollar timber kickbacks and the timber concessions, in whch his family (including his brother the foreign minister) had also developed interests.

The whole story had kicked off, as everyone knows, thanks to action by the Hong Kong police who had picked up Musa’s errand boy Michael Chia as he travelled through the airport with a bag stuffed full of cash.  Malaysia’s own Anti Corruption Commission officials took the matter up and soon dug up further evidence to furnish a report on multi-million dollar timber kickbacks that were filtering through numerous offshore companies before ending up in a Zurich UBS bank account in the name of Musa Aman.

Chia and various other associates of Musa, including his lawyer Christopher Barnes, did time in the lock-up over the matter.  People in Sabah are likely to remember this. They will also remember that Musa’s relative, the Attorney General then stepped in and stifled further action on the case.

However, after a bit of active digging, Sarawak Report managed to obtain many of the details and transactions involved in the Musa Aman case, so we exposed him.  We revealed how huge sums were being passed from known Sabah timber tycoons to HSBC (later UBS) bank accounts in Singapore in the name of Chia and other Musa proxies, before being passed on to that Zurich bank account.

The reason for those payments were marked as being for the granting of timber concessions!

We revealed that these same Singapore accounts were making regular payments to Musa’s own sons in Australia and to his employees as well.  The money then passed on through off-shore companies to Musa’s UBS Zurich account.

Sarawak Report published these revelations in numerous articles that scandalised Malaysia throughout 2012, however Musa did not sue.  In the end even Najib could not deny the evidence, so BN officially resolved the situation by declaring that Musa was ‘exonerated’ because he had explained that the stolen money and corrupt payments had been merely for party political purposes and not to furnish his lavish lifestyle on view to all (does this sound in any way familiar to Malaysian readers?).

This was despite the evidence that money had gone to his sons and the Zurich account and despite the fact that it is just as corrupt to steal money to promote one’s political party as it is to steal money for ‘personal’ purposes.  However, Najib and his AG refused to act, letting  Sabah’s crooked CM off the hook entirely.

That is, until the people get to have their say next week.

What the people can see with their eyes is that, on top of everything else, their own Musa Aman has his own raft of foreign court cases over this corruption facing him in Switzerland, just like Najib himself.  The UBS case has dragged painfully through the super-slow justice process in that country, however prosecutors have continued to fight their case started against the bank based on evidence passed by Sarawak Report.

UBS is the one in trouble for allowing Musa to money launder these stolen tens of millions into that Zurich bank account.  So, were BN to be returned to office, Malaysia would face the embarassment of not just their PM featuring in US, French and Swiss indictments, but their Sabah CM likewise featuring in a federal case in Switzerland.

On the other hand, people realise (as the numbers supporting Warisan continue to swell in Sabah) that if this gang gets thrown out entirely, there is an awful lot of money waiting in Switzerland, the US and elsewhere that could rightfully be returned to spend on public projects.

Musa, his brother, his son, his son in law and brother in law are all running for office again, having cooperated so nicely with Najib.  But, let’s see what the local people really think about it all on May 9th.