A stash of leaked papers and emails released overnight and referred to as ‘The Merdeka Papers’ have revealed further close connections between the ‘election warfare’ company SCL (parent company of scandal torn Cambridge Analytica) and UMNO’s election strategy for GE14.

The documents prove there were multiple communications between SCL (which has an office in KL ) and UMNO, which in October 2016 engaged the company to pitch its proposals for winning 40 key seats in GE14.

On the eve of Malaysia’s general election they provide damning evidence that the recent statements by UMNO and SCL denying the relationship and attacking Sarawak Report for revealing earlier links with Petronas (during the Sarawak election) were untrue. 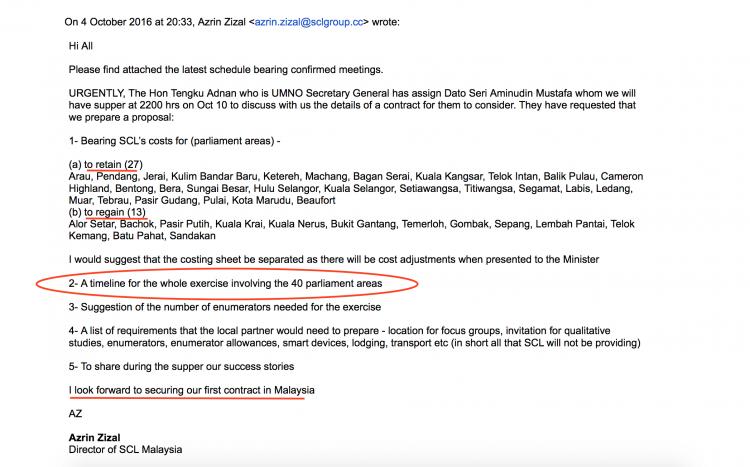 The Merdeka Papers include emails and proposals for tackling GE14 by SCL, which were presented to UMNO bosses during a protracted series of communications that began at least as early as 2014.

SCL also organised for Deputy PM Zahid Hamidi to attend the September 2016 Concordia event in New York, at which a meeting was held to discuss the company’s ‘Election Services’ with the Head of Cambridge Analytica’s Election Team, Mark Turnbull. 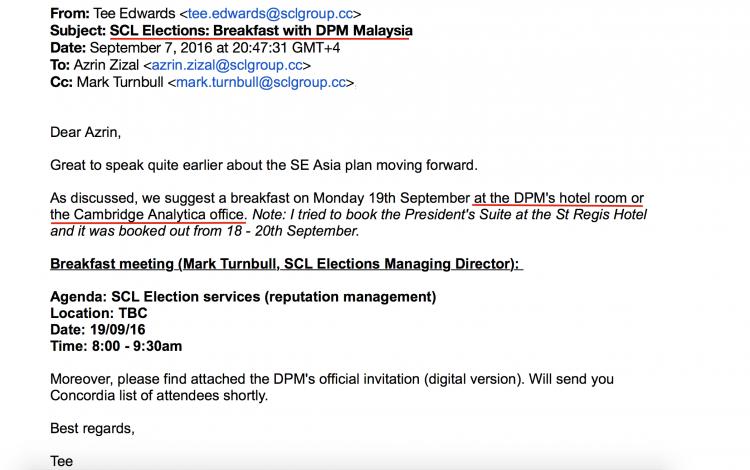 Turnbull became notorious during the recent Cambridge Analytica Scandal as the company’s election boss, willing to play dirty tricks on his client’s opponents. During a video sting recorded by Channel 4 News in March, Turnbull admitted to working in Malaysia:

Alex Taylor [SCL] – if you are collecting data on people and profilng them it give you more information to know how to segment the population to give them messaging about issues that they care about.. and we use that in America and we use it in Africa, that’s what we do as a company
Mark Turnbull [SCL]– We have done it in Mexico, we have done it in Malaysia and now we are moving to Brazil, China…Australia…. You mentioned intelligence gathering as well as part of the mix didn’t you?
– yes corporate intelligence.
..we have relationships and partnerships with specialist organisations of that kind that do that kind of work. You know who the opposition is you know their secrets, you know their tactics…

There is also evidence that SCL was involved at least indirectly in BN’s digital campaign for the previous 2013 elections. The company’s former KL boss, Shahid Shayaa, previously worked for Najib Razak in the Performance Management Delivery Unit of the Prime Minister’s Department and in a joint pitch with SCL to Petronas in 2014 (targeting the Sarawak elections) he boasted that his company Berkshire Communications had operated a “Command-And-Control Centre” with more than 100 team members for Barisan Nasional to manage social media: 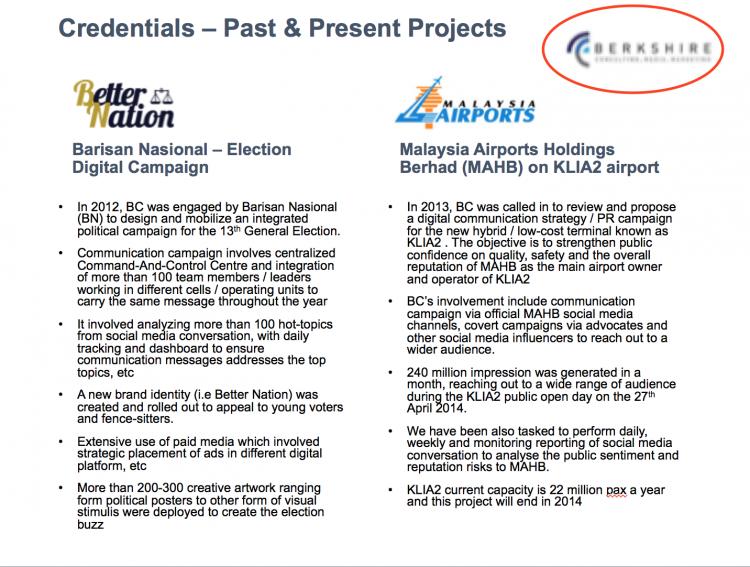 According to the briefing paper put together by the team behind the ‘Merdeka Leaks’ the concept of a Command-And-Control-Centre is a signature technique of SCL.  The company has boasted that it frequently works covertly for foreign clients, hiding behind local front companies.

The correspondence reveals an intimate and confident relationship between SCL and various key figures in Barisan Nasional, including Najib and the Secretary General of UMNO.

Warm greetings from New York, and thank you for sending this through. To be honest I’m not sure I entirely understand the idea contained in your deck but let’s discuss it in person when I arrive in your part of the world.

In terms of other arrangements…..Would it be possible for example to schedule a courtesy call to the Malaysian PM (and other related meetings) on Mon-Tues (Oct 3-4),

Despite these clear and ongoing contacts and the intimate connections with the Prime Minister’s Office and former personnel, SCL together with Najib issued angry denials in March that they had been associated in any way.  Rather, the Prime Minister’s statement sought to associate opposition figure Mukriz Mahathir with the company instead:

“However, the SCL Group country representative today confirmed to the Government that Cambridge Analytica’s advice on the 2013 general election was provided personally to (Datuk Seri) Mukhriz Mahathir, PPBM deputy president.

“The SCL representative [Azrin Zizal] also confirmed that he reported directly to Mukhriz Mahathir, not Barisan or the Government,” said the statement on Tuesday.

In the light of the latest leaks it is clear these statements were at best highly misleading and sought to disguise ongoing links with SCL. 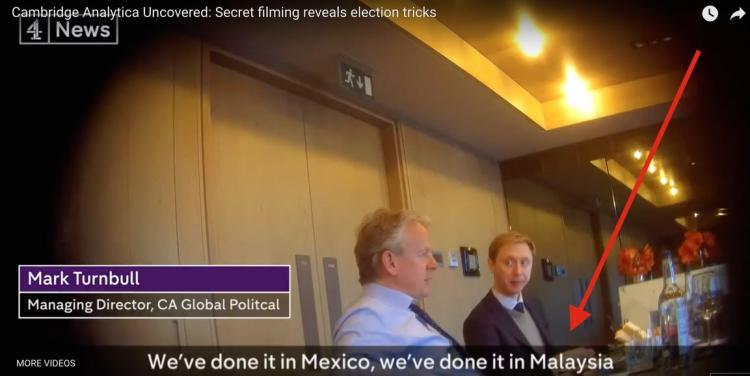 Ghosting in and ghosting out

The anonymous team behind the leaked documents paints a highly disturbing picture of the agenda of SCL, pointing out that one of the shareholders is businessman Lord Marland, who has close links with the present UK government and who has championed Najib as a key personal contact.  Their briefing highlights a number of the concerns raised about how SCL operates in countries around the world:

Many of the techniques of social influence and control being used today have their roots in the COUNTER-INSURGENCY doctrines used to suppress the movement for Malaysian independence more than half a century ago. They have since been supercharged with the help of new technologies, big data analysis and social media….

As a group, SCL and Cambridge Analytica specialise in PSYCHOLOGICAL WARFARE, BIG DATA analysis of populations with the intention of driving ATTITUDE AND BEHAVIOUR CHANGE, and MICRO- TARGETING IN SOCIAL MEDIA. They specialise in POLITICAL CAMPAIGNS and DEFENCE AND SECURITY CONTRACTING. They often operate with local partners or through FRONT ORGANISATIONS/COMPANIES. They use VIDEOS, CULTURAL CAMPAIGNS and INFLUENCERS, as well as more traditional political techniques.

Until 2015 one of SCL’s proprietary tools, TARGET AUDIENCE ANALYSIS, was reportedly “EXPORT-CONTROLLED” AS A WEAPON by the UK government – meaning it could only be used with UK government approval. SCL has deep links in the UK and US security communities, as well as in right-wing politics….

The paper goes on to detail the extensive links between SCL and Malaysia’s ruling party, saying that the denials of such links ‘seem to be disproved’. And it raises concerns already highlighted by Sarawak Report:

The UNDI ROSAK (“Spoilt Vote”) campaign which has been going viral among the Malaysian youth looks similar in its strategy to other VOTER SUPPRESSION CAMPAIGNS which Cambridge Analytica or SCL have designed and run in other countries – for example, the “Do So” campaign in TRINIDAD & TOBAGO. Voter suppression was also a key part of the TRUMP campaign according to a BLOOMBERG article by SASHA ISSENBERG.

“The Merdeka Papers are just the tip of the iceberg“, the document concludes, “It may not be easy to say exactly who has interfered in Malaysia’s democracy and society, or in exactly what way. But it is long past time for the people of Malaysia to claim their independence, and to throw off this corruption.”