Justice Dingemans said that he felt there were many inter-related and over-lapping issues, including the public interest surrounding the articles written by Sarawak Report and Sarawak Report’s rights to report on political matter, that would inevitably impinge on the issue of whether or not Hadi had grounds to bring the case in the first place.

Political parties cannot sue in the UK and Sarawak Report had petitioned for a quick preliminary trial to determine whether it was really Hadi or PAS who was behind the case to silence Sarawak Report on the issue of money flowing from UMNO into the politicial party.

This would have speeded up and simplified the process, possibly ending it within a matter of a few short weeks and cutting down the expense of the trial by several million ringgit (the cost of libel trials in the UK is high).

However, Hadi had resisted the speedy resolution and the judge agreed that Sarawak Report’s counter-claim for harassment and defamation also complicated matters and he said he felt that there were many aspects to the matter which would in the end make it easier to reach a judgement if all the issues were before the court at the same time.

This includes Sarawak Report’s ‘stay application’ to halt Hadi’s claim on the basis of abuses by parties linked to the plaintiff and also threats to witnesses in Malaysia.

The half day hearing related to this one procedural application only by Sarawak Report.  Claims being promulgated by PAS, alleging that there were ‘5 applications defeated‘ and even the astounding allegation that Hadi has ‘won the case’ are false.

In the light of new strengthened evidence that has emerged, in particular a recording believed to be of PAS leader Nik Abduh admitting to receiving money from UMNO and admitting senior figures in the party has also taken money for ‘Islamic purposes’, Sarawak Report had already withdrawn its original application relating to its so-called ‘truth defence’.

Justice Dingemans asked if Sarawak Report plans to bring back a revised and strengthened ‘truth defence’ and Sarawak Report’s lawyers confirmed they will be doing so and that scientific evidence is currently being finalised, determining the authenticity of the recording.  That issue was accepted by the court.

The judge also noted that Sarawak Report will also now return to raise the issues in its earlier ‘stay application’, which were also previously suspended for the purposes of today’s single application to narrow down the trial to a preliminary determination on whether Hadi could claim his own reputation had been implicated.

Sarawak Report had already agreed to cover any costs involved in revising and stregthening those core defences.  Hadi’s lawyers attempted to claim £69,000 for the inconveniences incurred, which the Judge ruled as being extraordinarily high.  He slashed the demand to £40,000. 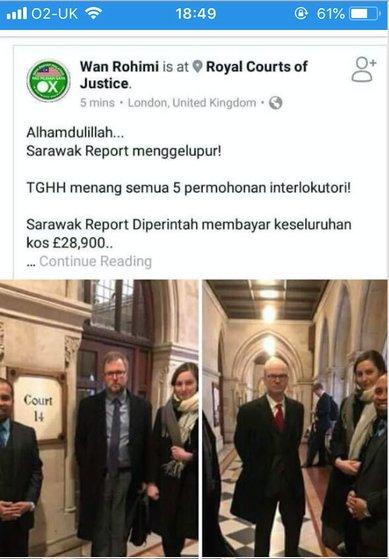 During the procedings Justice Dingemans demanded that Hadi’s lawyers inform the court what their total bills have amounted to so far in this case – the sums that Hadi/PAS will have already paid.  Carter Ruck’s barrister admitted these stand at £305,250 to date, meaning that Hadi has paid out RM1,646,434 ringgit, before the pre-trial work even gets going.

Sarawak Report’s costs have been £200,000.  Hadi claimed yesterday that ‘wealthy members of PAS’ are funding his case, for which he has hired one of London’s most expensive legal firms.  Sarawak Report has been backed by well-wishers, who have contributed to a crowd funding exercise to support freedom of reporting.

The judge demanded both sides to participate in a case management exercise to ensure that the case now moves on towards a full trial.  The next stages will involve extensive disclosure by both sides.

There was no comment whatsoever by the judge on the merits of the case on either side during what was merely a procedural hearing.  If supporters of PAS are claiming that ‘Hadi has won’ any aspect of the case, their leader needs to understand that the fun has only just begun.

So far, he has won nothing except a guaranteed full trial that will examine every detail of PAS’s relationship with UMNO between now and April next year. 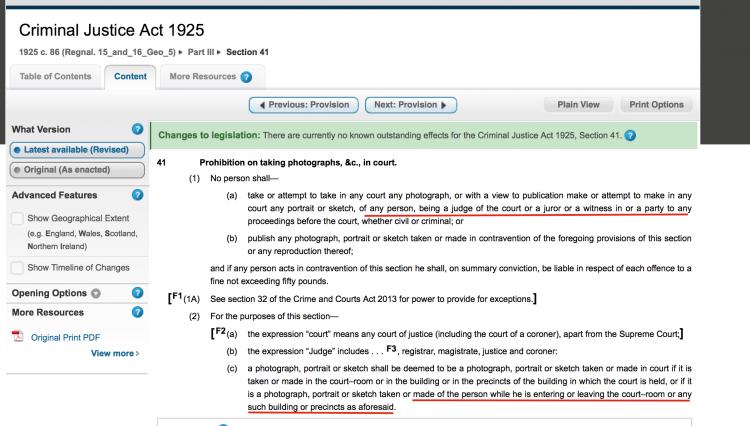 Taking photos in the High Court risks up to 6 months in jail! Funny that PAS’s lawyer didn’t know better, but his understanding of the nature of the  proceedings also appears flawed!