Does This Desperado Of A PM Plan To Arrest The Entire Opposition During The Course Of This Election?

Najib is today steamrollering a bill through Parliament that is in every way incompatible with democracy and with every Malaysian’s basic freedoms, as enshrined in the constitution.

In the process, he is revealing what can only be his own blind panic about the election he has to call in a matter of days.  His polling must have terrified him, to have resorted to such desperate measures as allowing himself the power to dispatch police to haul over any opponent who criticises him at a ceramah…. or, as sinister posters now imply, to pick up any citizen, who forwards a “fake” link on his smart phone as he walks to work.

The whole point of an election is to allow different parties to present their different perspectives and solutions to the electorate, so that people can make a choice. That inevitably includes criticising the other side and it might mean the transfer of office from one group to another.

None of this is good enough for Najib, because of course, there is so much basis for believing that he is a criminal running once more for office and if he loses he will no longer be able to pervert the course of justice.  He wants to prevent his opponents from mentioning that and he wants to intimidate them from saying anything at all that undermines his desperate determination to stay in power, if only to keep himself out of jail.

To this end, the so-called Anti Fake News bill, soon to become ‘law’, having received the barest of scrutiny, will allow any police sergeant to march up to an election podium and haul down a speaker who says something he thinks may be deemed ‘untrue’ by Najib’s Attorney General.  Consider the chaos and confusion that could and without a shred of doubt will now bring.

For example, were a speaker to mention the fact that the US Department of Justice has launched a criminal investigation into 1MDB? Kapow! They could (and doubtless in some cases will) be removed from their soapbox and charged with speaking a falsehood, because Najib’s men have designated that fact to be False News.

That speaker could then be held over and charged with a ‘crime’ that could in theory land him or her with a 6 year (kindly mitigated from 10 over the weekend) jail sentence and crippling fine to hit the remaining family members with.  Such a nice fellow that Najib.

What’s more, as that series of sinister government posters around town are pointing out, anyone caught forwarding the contents of the said offending speech, say through a link or a tweet or a whatsapp chat group, could be likewise hauled off to jail for spreading ‘false news’, even though everyone knows it is actually fact.

By the end of this election campaign, therefore, the present Prime Minister should have logged enough utterances and forwarded texts and links to incarcerate at least half the inhabitants of the country (on the basis that over half disagreed and voted against him at the last election and plainly consider him a crook) should he or compliant police officers choose to do so.

Should anyone be of the opinion that the yacht just seized in Indonesia by the FBI belonged to Jho Low and was bought with money stolen from 1MDB, given that the world media and US DOJ have reported this to be the case?

Say it or tweet it and from now on you could be arrested, because Najib and his oaf Communications Minister have declared it to be ‘Fake News’.

Of course, Najib’s ‘Fake News’ law is just the sort of legislation you would expect to see in all sorts of totalitarian dictatorships run by strongmen around the globe. However, such nonsense legislation designed to subjugate an entire population simply cannot go hand in hand with democracy. How can you have a genuine election where criticism is banned?

What is of real concern and a test for Malaysia’s whole future is whether Najib, who is acting like a cornered rat over this election, will get away with this attempt at mass intimidation and crazy, chaos inducing legislation?

Will he succeed in frightening Malaysians and their leaders to surrender up their principles and rights and stay silent about all the matters which embarrass him during this campaign? 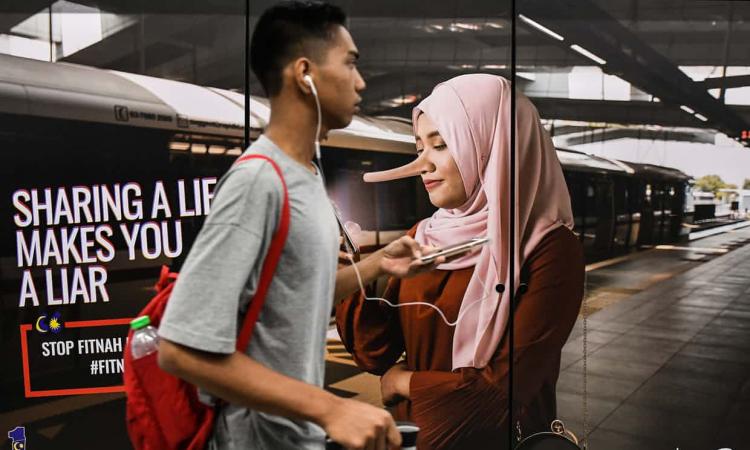 Downright sinister – how Najib seeks to demonise anyone who dares suggest that it is HE who is maybe lying, for example about 1MDB/Scorpene/Altantuya..

If the population and its leaders allow Najib to get away with this outrageous and nonsensical attack on truth in the name of truth, their reward will be to indeed join that sorry group of nations, where folk live under the strong arm dictatorship of greedy and rapacious individuals, who together with their family and cronies employ the powers of governance to suck their countries dry.

Najib and his wife Rosmah will for themselves give an immense sigh of relief if they can get away with this desperate ploy. The stakes for them could not be higher. Success will bring them power for life; inherited office for young Norashman and little Riza and, of course, unlimited access to cash from the likes of EPF and PNB, which presently remain fairly tricky to openly thieve from.

Whereas failure to successfully enforce this nonsense measure, in the face of a population that is determined to stick to being allowed to say what they think to be true, would result in a return to the rule of law in Malaysia, which is a prospect that couple have very good reason to fear mightily in many ways.

Najib’s unconstitutional law, when it finally gets to be tested by the courts can only be rejected, like his other desperate violations, such as SOSMA.  However,  to him the ultimate unconstitutionality of his silly law doesn’t matter, because the entire measure is only for the here and now, to scare everyone into silence over the coming election weeks.

Malaysians ought not allow him and his intemperate wife and shrinking clique of jumped up courtiers to intimidate a nation. The only way to manage the Fake News law over the next few weeks is to drown out Najib and his henchmen on every corner and in every tweet, so that his bewildered Fake News enforcers will be running round in circles trying to swat the truth in all directions.

Najib cannot make this desperate Fake News gambit work, unless his apparent disdain for his own people, whom he apparently believes to be gutless enough to accept this removal of their rights, proves justified.

Don’t let him get away with this desperate measure. Let 30 million voices speak the truth instead.