EPF issued a blanket denial of Sarawak Report’s story last week about negotiations that had taken place between their senior executive Ja’afar bin Rihan and the companies Ladylaw Securities and Limage Holdings, both set up by convicted financial fraudsters.

Other funds, including FELDA and FELCRA were also caught up in these billion dollar negotiations, according to our documentation, however these have not responded so far.

According to The Australian newspaper, which has also viewed much of the evidence, a Malaysian Government spokesman has further claimed that Najib and his office were “neither aware of nor have had any interaction with the companies and individual mentioned“.

The spokesman added that the matter might all be “Fake News” in the run up to the election.

Sarawak Report questions the wisdom of such total denials, when there is so much evidence that these individuals HAVE interfaced with the companies concerned.

By claiming the whole episode never happened, in the face of considerable evidence that negotitations did take place, raises doubt over the further claim that a series of complex, signed legal documents were all elaborately forged.

In the first instance, the position of total denial and ‘Fake News’ flies in the face of the testimony of some extremely respected professional individuals in Australia.  Former senior public servant Nic Manikis, who is now the owner of Ladylaw, has frankly acknowledged to The Australian the negotiations took place and the fact they involved a billion dollars of potential investment by EPF, FELDA and FELCRA, all of whom engaged in these discussions.

The newspaper has also confirmed the same point with a senior partner at Australia’s established legal firm Sneddon Hall & Gallop and with an estate agent at the major estate agency Knight Frank, who worked on the proposals with Ladylaw. Nic Manikis is also quoted in The Australian confirming that the negotiations “enjoyed the support of the Malaysian Prime Minister Najib Razak”.

This fully accords with the extensive documentation viewed by Sarawak Report, which has also received full and written confirmation from Manikis that Najib knew about and was supportive of the deal.  A clearly signed letter was produced by the Prime Minister’s office in which Najib signalled that he wanted the various funds to engage in the investments. 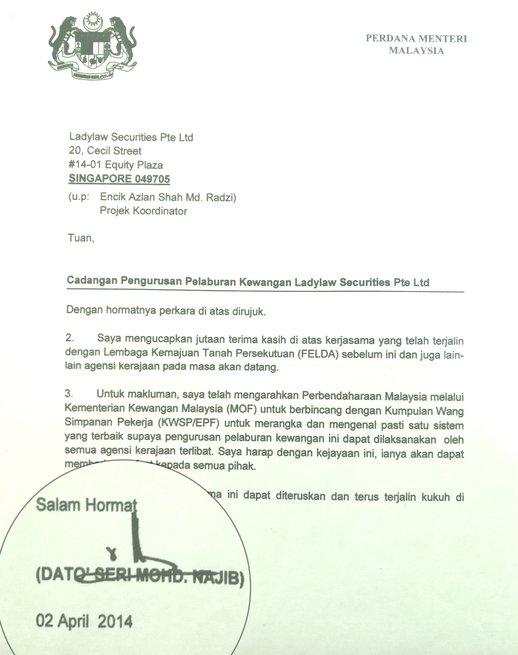 The Hospital Project Was NOT ‘Fake News’

The second fact that EPF has tried to deny, but which The Australian has now substantiated, is that EPF’s Ja’far bin Rihan was indeed working on a planned hospital project with a view to ‘get money out of EPF to Ladylaw’, as Manikis had earlier confirmed to Sarawak Report.

“Mr Manikis said EPF raised with him the prospect of a project to “set up medical cities all over Malaysia.  They asked me if I wanted to be involved” he said [The Australian]

Manikis told The Australian that as far as he was concerned this project in the end fell through, because “they said the Health Department didn’t want to do it”.  However, he also provided an interesting alternative explanation to Sarawak Report as to what the real reason might have been as to why he in the end got frozen out of negotiations.

He had taken over from the original Ladylaw boss, a convicted fraudster who had died half way through the discussions with the Malaysian funds:

“I had made it clear to all and sundry that our dealings would be transparent and above board…..long worked for reputations to protect ….. so here we are…. no cigar”

Manikis told Sarawak Report. He also confirmed that the documents we have obtained (emails, letters, presentations and contracts) relating to Ladylaw and himself are genuine documents, not forged or faked as EPF have been suggesting the whole body of evidence has been.

So, thanks to these key witnesses, the facts that there were negotiations with Ladylaw and that EPF was indeed mulling a Medical City Project worth billions of ringgit are established, whether or not these projects officially went ahead.

Yet, the fund and Malaysian Government are denying the very existence of the project and suggesting that extensive power point presentations, documentation and correspondence seen by Sarawak Report could be “forged” and “fake news”.  Does EPF not protest far too much under the circumstances?

And is it not now clearly the case, for all to see, that either EPF have lied or a swathe of Australian professionals have lied over these crucial matters, making it all the more urgent to examine their denials about the rest of the information we have brought to bear?

Most importantly, if EPF have lied about these issues, why should we assume they are telling the truth about the assignation of RM10.64 billion in bonds to raise USD$4 billion through Limage Holdings for the EPF ‘proxy’ company TJJR Diversified (M)?

Sarawak Report has a considerable body of signed documentation and banking details that strongly suggest that the company TJJR Diversified (M) was expecting to receive US$4 billion raised by Limage Holdings S.A. (owned by a convicted Hungarian fraudster) raised thanks to the allocation of those EPF bonds. 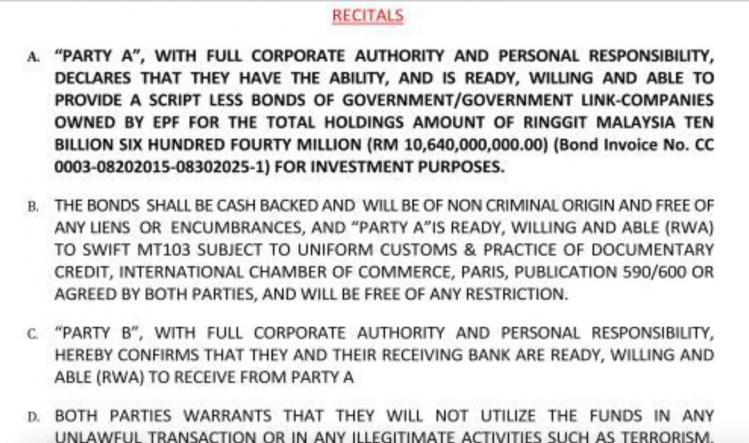 ‘Party A’, which was TJJR Diversified (M), said they had access to the bonds according to an extensive legal agreement with a company that would help them receive cash leveraged from these by Limage Holdings 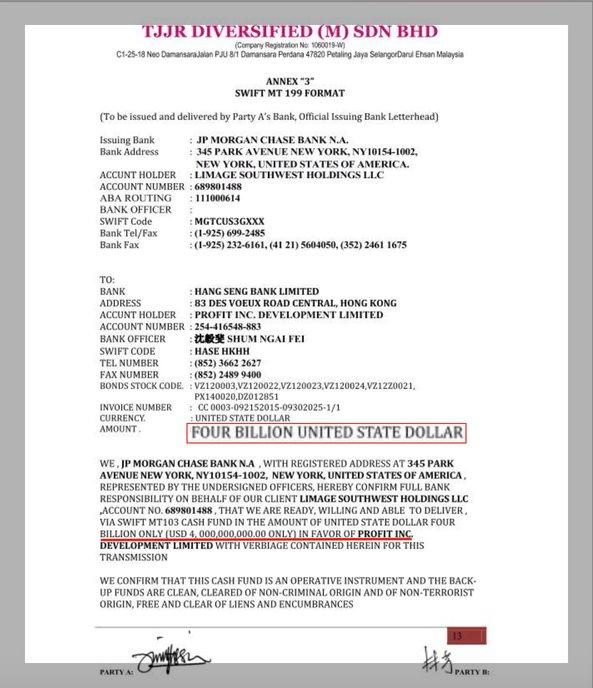 Time for TJJR Diverisfied (M) to explain or deny the authenticity of these signed and passport authorised agreements?

Another smoking gun matter, which EPF and Najib are going to find hard to dismiss using the claim of ‘Fake News’ is that there is already legal action underway as certain UMNO individuals appear to have been trying to gain what they regard as their commission on these very deals since way back in August 2015, just after the alleged deals over the EPF bonds were signed.

The Australian has named the individual politician whom Nic Manikis names as having sent him several legal letters about the matter and who is demanding US$25 million, on the grounds that he says money was indeed extracted from EPF and went to TJJR Diversified, which is officially owned by one woman law graduate named Junaidah binti Hussin.

The sender of those legal letters, Nic Manikis has told The Australian, is none other than UMNO division boss, Azhary bin Ramly:

Senior UMNO figure who seems to know a lot about this matter – is he too a faker and a forger?!

So, now EPF and Najib are forced to add an on-going legal action that is sitting with lawyers in Australia amounting to a demand of millions of dollars to their claims about ‘Fake News’ and forged documents.  Manikis says he is fighting this demand, so it looks unlikely anyone will be able to get a lid back onto this can of worms any time soon. 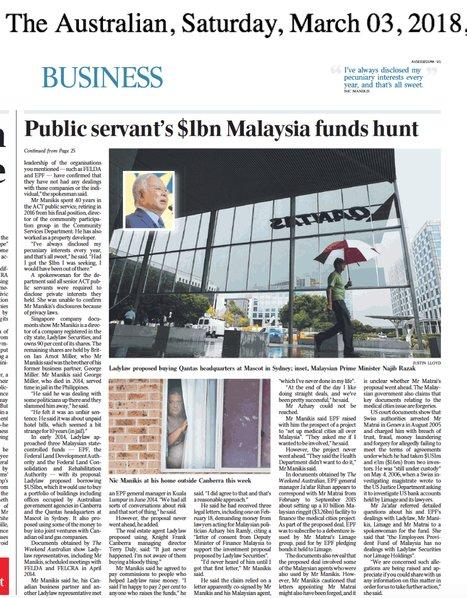