PNB And EPF To Bail Out Spiralling Costs Of London's Battersea Power Station!

Like a development black hole on the South Bank, the Battersea Park project has just swallowed up a gargantuan RM8.6 billion (£1.6 billion) of Malaysia’s public money from the two savings funds EPF and PNB – no doubting that behind the decision would have been the face-saving pressure of the Minister of Finance.

The surprise news hit the headlines in London late on Thursday after it became clear that the Malaysian consortium which had been funding the spiralling costs of the project had pulled out and a bail out was required.

It makes it the most expensive property purchase ever in London, dwarfing the so-called Walkie Talkie Tower sale for £1.3 bn last year.

The cost nightmare of the project is spelt out in the figures.  The original Sime Derby/ Setia consortium had bought the development in 2012 for what was already considered an eye-watering £400 million, after it had sat for decades as a crumbling white elephant project on the South Bank.

Compare that to the original price.  It was bought from the Central Electricity Generating board in 1987 for just £1.5 million, meaning that the present purchase by Malaysia’s public pension funds is a thousand times greater.

The projected profit return on the project has meanwhile been cut from 20% to 8% since the 2012 sale to the Malaysian consortium led by property developer SP Setia (SETI.KL)  and it is still not due to be completed till 2020 – the wider development including malls and further residential blocks will not be finished till 2028.

S P Setia was itself in fact 70% already owned by the two funds through existing shareholdings, so there are plenty of questions to be asked about why these savings funds decided to effectively re-finance their own investment.

Reports have pointed to cost over-runs in all directions, as hazards such as asbestos raised their heads and all four chimney towers needed to be taken down and re-built.  London’s Evening Standard newspaper has indicated that the proposed sale came after the building costs doubled from an initial forecast of about 750 million pounds to around 1.5 billion.

Yet today the developers apparently denied that the transaction was in response to an increase in costs. A spokesman for the developers told Reuters:

“Whilst there have been cost increases across the industry and at Battersea Power Station, this transaction is not in reaction to costs. It is simply being concluded to create a long-term stable asset management and ownership platform going forward.”

The building is famed as an iconic London landmark, having been designed as a classic piece of 1930’s architecture by Giles Gilbert Scott.  However, many locals have been dismayed by the ugly surround the development has entailed, with fast-built residential blocks of no visible merit destroying once remarkable views of the original building.

To add insult to injury, the developers have been granted permission to cancel their original commitments to affordable housing, as part of the attempt to contain the disastrous cost over-runs.  Most of the residential properties have been marketed abroad in South East Asia to well-heeled Malaysians and in Hong Kong and Singapore, at the expense of Londoners, for whom housing has become extremely scarce and exponentially expensive, thanks mainly to wealthy foreign buyers.

So, it appears that all but the mega-rich in both regions have lost out on the project, which was spearheaded by Prime Minister Najib Razak, together wth the government of David Cameron soon after both took office.  The mover and shaker behind the deal was the former Trade Minister Lord Marland, a key promoter of UK trade deals with Malaysia, who has called the influx of Malaysian money into London one of his crowning achievements. 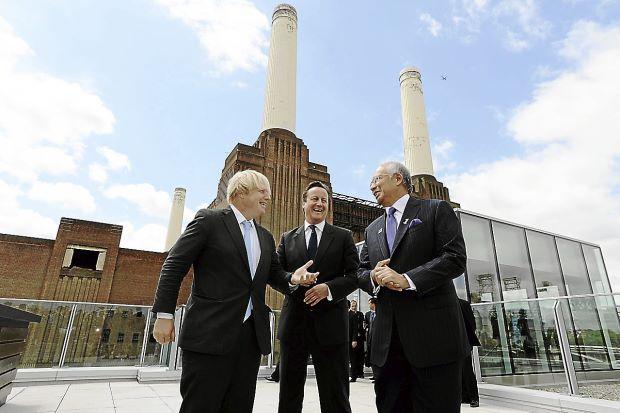 Battersea Power Station has created planning headaches in London for decades and the present plan is the seventh attempt to find a profitable and acceptable use for the site, whilst preserving a building Londoners did not want destroyed.  Without this latest bailout it is understood the entire project was on the brink of being put up for auction.

Relieved developers have trumpeted the buy out as a ‘show of faith’ that will secure the future and completion of the project.

“A spokesman for the Battersea Power Station Development Company said: “This announcement is a tremendous show of faith and means that this iconic London landmark will be maintained for future generations to enjoy long after its restoration is complete.”

It will also save face for Najib Razak in advance of the upcoming election.  Whether pensioners who hold savings in PNB and EPF will have reason to be pleased about the quality of the eventual profits from this investment is quite a different matter.