Khalid Is Out - But Not Without A Fight!

For days the tussles have gone to and fro behind the scenes at Bukit Aman and Putrajaya, according to inside reports, between those struggling to extend the tainted Chief of Police’s tenure beyond his formal retirement date and those who wanted him out.

In favour of getting that extension was on the face of it, of course, the Prime Minister, who has been busily working to extend all his key henchmen in office to steer his way through the next election, which he now looks almost certain to delay for as long as possible.

Najib got his way with the Chief Justice and President of the Court of Appeal.  However, in the case of the Chief of Police, Sarawak Report has learnt that the Agong put his foot down and refused to sign the order.  It means that Khalid Abu Bakar has to go, although, in a further twist, some are whispering the refusal might have been a ruse orchestrated by Najib to get rid of an IGP, who knew too much, whilst pretending to have supported him!

News of the dramatic turn of events, after it had been more or less accepted that the IGP’s extension was a done deal, seeped out at the weekend.  Now Sarawak Report has recieved evidence, in the form of a signed internal PDRM order to prepare for Abu Bakar’s retirement parade to be held at 3.30pm on September 4th – full uniform and regalia, of course. 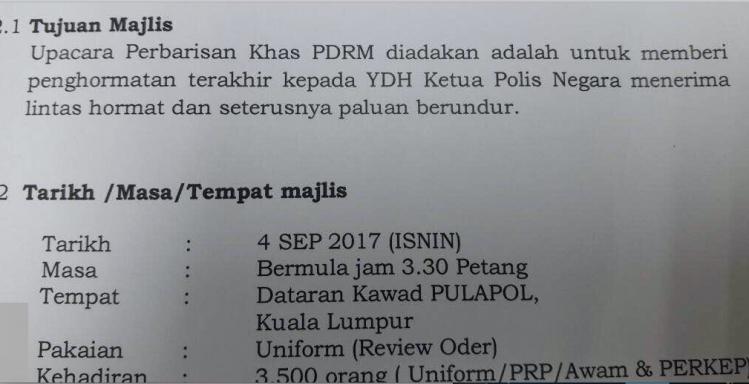 Khalid will be replaced by the current Deputy Inspector General, Noor Rashid. He in turn will be succeeded by Dato Sri Fuzi, who is regarded as a Khalid loyalist.

The refusal of the Agong to sign the IGP’s extension was a shock and ostensibly a major slap in the face for the Prime Minister, who has been pushing past Malaysia’s constitutional rulers with numerous controversial measures over recent months, most particularly in the case of his emergency powers legislation, which the Council of Rulers objected to, only to be ignored.

It is widely recognised that support from Khalid was what saved Najib’s own position back in July 2015, when joint task force investigations had recommended the Prime Minister be charged over the theft of public money from 1MDB.

It was the IGP who warned Najib that the then AG, Abdul Gani Patail, had drawn up charge sheets to that effect and that the then Agong had agreed to order his removal from office, in favour of his then Deputy, Muhyiddin Yassin.

Thanks to that warning, armed officers were detailed to arrest the AG as he arrived for work on the day that Najib was due himself to be confronted and instead they escorted the country’s most senior law officer back to his home and unconstitutionally ordered him at gun-point to resign for ‘health reasons’.

So, Najib and Khalid are effectively ‘in it together’ and Najib had made clear he wanted Khalid in situ for GE14 – or at least needed to pretend he did (there ought be no real justification for extending a police chief for an election).

However, the IGP has become an increasing liability with exposures over recent weeks of his extensive ties and family connections with the leader of an alleged major police protection racket.

After evidence was published through this website that Khalid and a web of his closest staff associates in the police vice and gambling units had been in close and regular contact with the ring-leader known as Gopi (Gopinathan Krishnan), pressure had come direct from the PM’s office to put a lid on the Malacca-based investigation, which had at first been encouraged on the part of the MACC.

The investigation has now indeed been put on ice. However to extend the IGP under such circumstances was clearly too much for Malaysia’s new Agong, whose role is to act as a last protection for the public interest in such matters – hence the importance of his signature on such decisions and his refusal on this occasion to apply it.

Deal To Drop The Gopi Investigation?

Sarawak Report has been informed that the deal behind the IGP’s departure was a simple one. In return for Khalid stepping down he has been promised that no action will be taken against him and his CID Chief Mohamad Salleh and others over the ‘Ops Gopi’ investigation, despite the mounds of evidence linking him to the police protection racketeers.

The fact that top vice cops were shown to be in frequent contact with Gopi for reasons yet to be identified will now apparently no longer be investigated.

Meanwhile, the jostling for office in recent days at Bukit Aman as these developments played out has been likened to a snake-pit by our informants. CID Chief, Salleh was among Khalid Abu Bakar’s supporters hoping to advance his position to Deputy IGP.  However, a series of planned promotions were cancelled as Khalid’s position remained on a knife edge.

None of the behind the scenes disarray will be on view as the public announcements are shortly made and the uniforms go on parade on September 4th, of course.  But, Malaysians have a lot to thank their Agong for, if it was indeed the King and not Najib acting behind the scenes, who put a stay on the royal signature!

The outcome, as it stands, means no drive to clean up at Bukit Aman, however, and no attempt to press investigations on the massive gambling and protection racket run by Gopi, with whom so many remaining senior officers held such close connections.