Emails supplied to Sarawak Report and other news organisations by the group calling itself Global Leaks confirm that 1MDB’s fugitive fixer and the man behind the world’s record global kleptocracy theft was in “active discussions” with the United States Department of Justice as of mid-May of this year.

In an email dated May 16th 2017, a lawyer acting on behalf of Sheikh Yousef Otaiba, the Abu Dhabi Ambassador to the United States, revealed that a representative of the Mubadala fund had confirmed to him that Jho Low is in active negotiations with the DOJ:

“Marty stated that he knew that Jho Low was in active discusssions with the US Department of Justice, but was not comfortable with sharing with me …what the status of those discussions were… I was surprised that Marty had not previously shared that Jho Low was in active discussions with the DOJ as that is a very important fact from our perspective….”

The news is likely to strike horror and dismay into the heart of the Najib administration in Malaysia, since it indicates that the key link-man and proxy for the Prime Minister, at the heart of this major scandal, is seeking to come to terms with investigators. US law enforcers have been doggedly unravelling his activities over the past two years and frozen hundreds of millions of dollars worth of assets and accounts.

There is little doubt that Low is in a position to confirm every last detail of 1MDB’s criminal activities and is in a position to point the finger at his “Big Boss” – the name he gave to Najib Razak. Sarawak Report has heard that Low has been negotiating to protect the rest of his extended family (father, brother and sister) who have all been caught up in the web of money laundering.

The deadly news comes on the very day the beleaguered Finance Minister failed to meet the final five day grace period for the payment of USD628 million, due under a court ruling on July 31st to Abu Dhabi’s sovereign wealth fund IPIC.

A hurried attempt to raise an almost identical sum through a bond issue by the Bank of Malaysia was initiated last week after 1MDB missed the July 31st deadline, leaving Malaysia with just five working days ‘cure period’ under the terms of the ruling.  However, it appears that plans to force Malaysia’s so-called GLCs (Government Linked Companies) to invest in the letters have failed, owing to the fact that none of these former cash cows have liquidity remaining.

The deadline expired today, pushing Malaysia into sovereign default and dependent on an apparent plea to Abu Dhabi to extend the grace period, in order to rescue the economy from the inevitable consequences of such a devastating development.  Najib has asked for the Gulf rulers to be lenient till the end of August, however insiders have told Sarawak Report that there is little chance of him being able to find the money by then either nor the further USD602 million that must be paid on December 31st.

The money is owed from the billion dollar bail-out that Abu Dhabi’s Aabar fund extended to 1MDB in a so-called Term Sheet back in June 2015, which Malaysia had promised would be re-paid.

On-going discussions have continued for many months

Jho Low was at the centre of the 1MDB mega-heists and orchestrated, together with his father and family members, the movement of billions of dollars around the global financial system, abusing off-shore companies and trusts and exploiting lax and criminal banking institutions.  A number of bankers have been jailed in Singapore, others are still being investigated in Switzerland and the United States.

Till now, it was formally understood however, that Jho was denying all charges and was continuing to defend Najib, for whom he has continued to work, attempting to strike deals to raise futher money to keep up the Malaysian Government facade that there had been “no wrong-doing” at 1MDB.

However, as 1MDB related and politically sensitive accounts linked to Malaysia started to become frozen throughout the global banking system, Jho’s and Najib’s options have become ever more limited, along with their access to cash.

Jho Low had turned to China, where he is now largely hiding out, and sought to create the big time deals for Najib that they hoped would provide the cash to solve this liquidity crisis and help pay 1MDB’s now unavoidable debt repayments.

But, China, having agreed to a number of controversial mega-projects, which were criticised for threatening Malaysia’s independence vis a vis the neighbouring super-power, appears to have pulled back from funnelling in the much needed cash into an uncertain and unstable situation in advance of an election where the Prime Minister faces an unprecedented unpopularity crisis.

Chinese investors were said to be discomforted by the off-shore routes proposed for channelling cash to disguise that the origins were not 1MDB.  Last year, a contract for the East Coast Railway Project with China’s CCCC construction giant was leaked to Sarawak Report, which showed that the contract had been inflated by a 100% in an attempt to disguise the debt repayments owed by the beleagured fund.

The release of the emails between Jho Low and Sheikh Otaiba follow upon recent disclosures that the FBI have been questioning the Abu Dhabi Ambassador about his ties to Najib’s secret 1MDB fixer.  Dating back to 2007 they show that Low had a longstanding business understanding with Otaiba and his colleague Shaher Awartani, partner of the company Silver Coast Construction & Boring.

Jho Low is reported to have channelled $66 million in payments to Otaiba out of money taken from 1MDB, in return for favours that included introductions and assistance in getting lenders such as Mubadala to invest in projects spearheaded by Low.  Sarawak Report has been informed that the money was invested amongst other things into a Malibu Mansion owned by Otaiba, worth more that $50 million. 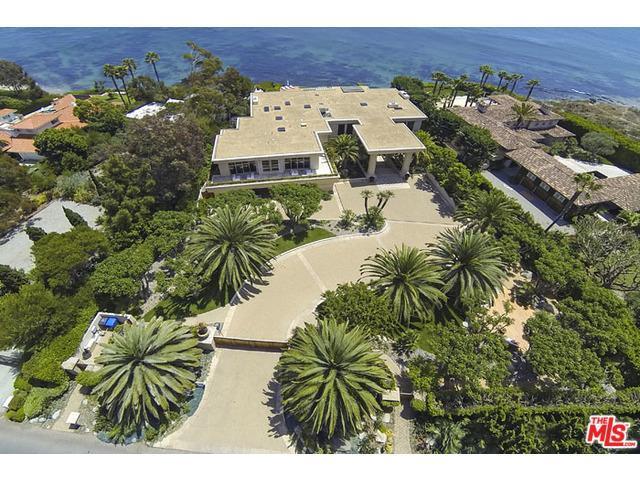 The Sheikh is now in discussion with the US authorities and it remains to be seen whether he, like other high profile figures, will be required to hand back the asset or other items acquired through money laundered from 1MDB.  Both super-model Miranda Kerr and super-star Leo DiCaprio have already returned assets acquired from Jho Low.

As part of this process Otaiba and Shaher have hired legal advisors to help protect their position and meet the problem. They have also discussed making arrangements to speak to Jho Low to discover the full extent of their exposure.  As part of the released correspondence Shaher explains in an email on May 23rd that he would prefer his lawyers to reach out and speak to Jho Low:

The exercise achieved one huge piece of information from lawyers in contact with “TJL” [Taek Jho Low], according to the data.  An email sent by Otaiba’s lawyers on May 16th had disclosed that they had heard from the legal team at the US law firm Paul Hastings, which represents the Abu Dhabi fund Mubadala that they were aware that Jho Low has indeed been negotiation with the DOJ. Otaiba’s lawyer writes: 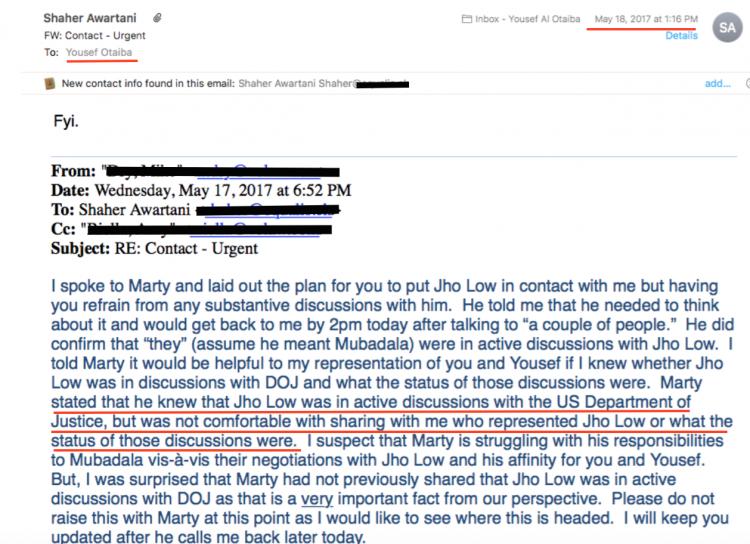 VERY important from our perspective…. and Najib’s

It is probably a very important fact from Najib Razak’s perspective also, since his options are closing in.