Jho Low has reportedly spent the past several months residing at the Presidential Suite of the five star Peninsular Hotel in Shanghai, from where he occasionally flits (by private jet of course) to places where he still has contacts and influence, like Taiwan, Thailand and Vietnam.

He is currently protected as the key advisor to Najib, say those in the know, because the Malaysian Prime Minister is doing everything China wants in the context of their present policies of expanding economic and military influence in the region.

But, the Chinese are pragmatists with an eye on the future.  Their engagement in Najib’s 1MDB bail-out plans has been cautious and limited and the extradition requests are clearly queuing up.

So, how long can this last and when will Jho Low’s guilded cage convert into a holding cell on the way to Washington, Zurich or Singapore? 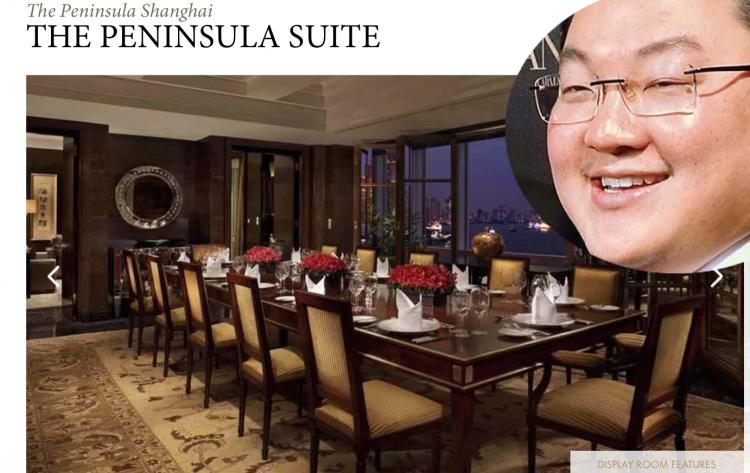 Jho Low has been living in protected grandure in China on his 1MDB gains….

It is a nightmare that Jho Low himself, like all master criminals, is plainly not willing to entertain as he continues to blow his stolen money. Yesterday, through his New York publicists the fugitive was again issuing furious statements against the latest evidence to emerge against him in Singapore, as his former wealth manager was jailed for assisting his money laundering of billions stolen from 1MDB:

“Any attempts to link Mr Low to the recent guilty pleas by parties allegedly making secret profits are based on unfounded assumptions.
This is an example of overreach with a politically motivated and selectively chosen narrative alleging 1MDB as a “victim”, when it has been clearly stated by the Malaysian authorities that there has been no evidence of any misappropriation of 1MDB funds.
No wrongdoing has been proved in any jurisdiction relating to the alleged misappropriation of 1MDB funds, and this development in Singapore does not change that.
Mr Low is confident that any impartial party presented with the complete facts will see that the allegations are flawed, biased and create an inaccurate picture.”

Of course, Jho Low could always choose to walk into an impartial court of law, armed with the complete facts and explain why the allegations are flawed. However, he seems to have lost confidence in institutions in countries where he was once happy to plough billions into investments.

We are getting the same message from the bunker in KL, of course, where Jho’s patron Najib himself is likewise watching a horrifying alliance of combined forces, which are now closing in against him – united in revulsion against corruption.

What Came Out In The Singapore Court

According to the Jho Low/ Najib nexus there is no proof behind the allegations which have sparked global investigations and landed several of their associates in jail.  None whatsoever. Not a shred of it anywhere. Any court, government, official investigator, repentant banker or plea bargainer from East or West who says otherwise is merely politically motivated and biased, according to Najib’s narrowing band of spokesmen.

So let’s evaluate their logic with reference to the devatating documents released yesterday by the court of Singapore, as banker Yeo Jiawei was sentenced to an extended 54 months in jail.  The sentence was mitigated by the fact he had confessed and cooperated …. providing valuable evidence, say prosecutors, about the “main person of interest” in the “ongoing case”, which is Jho Taek Low.

Just made up – says Jho Low, 1MDB and Najib’s remaining ministers who are willing to speak on 1MDB

Jho Low’s former wealth manager at BSI, who went on to be his direct employee, has now pleaded guilty to a Singapore Court to a string of charges relating to laundering stolen money from 1MDB on behalf of Jho Low and organising for secret kickbacks for himself. 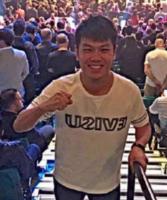 At the start of this saga, Jho Low, 1MDB and supportive Malaysian politicians had concentrated on the argument that there was “no proof” because there had been no trial and judgement in a court of law.

Even the DOJ court filings have been dismissed in this vein, because they have not yet come to trial.

Yet the fact of the matter is that the Singapore Courts have now ruled in this case, as well as others, and in the process have entirely corroborated the findings placed by the DOJ before the US courts.

Except for some reason Jho Low claims the judgement doesn’t prove what it says:“No wrongdoing has been proved in any jurisdiction relating to the alleged misappropriation of 1MDB funds, and this development in Singapore does not change that“, his statement claimed.

Yet, wrongdoing with relation to 1MDB funds is exactly what the judgement proves and the prosecutors took the trouble to repeatedly name Jho Low, squarely at the centre of that wrong-doing and they made clear that they are looking for him as part of their continuing on-going investigation.

Not only that, the Singapore prosecutors did not stint in laying out the scale and enormity of the wrong-doing Jho Low is at the centre of.  Quite simply, it has been the largest, most outrageous and complicated theft they have ever had to deal with:

Since 2015, Commercial Affairs Department has been conducting investigations in a case that has been dubbed the “world’s biggest financial scandal” by international media. In the context of Singapore, it is incontrovertible that it is by far the most complex, sophisticated and largest money laundering case that CAD has ever handled.

The case concerns staggering amounts of moneys traceable to 1MDB and SRC, numerous transactions in which these moneys were moved across multiple jurisdictions, entities bearing similar names but having no genuine affiliation to that of established companies (eg, entities bearing similar names to the sovereign wealth fund, Aabar Investments PJS), and voluminous amounts of documentation that evidence “improprieties” that spanned the course of several years. The scale and sensitivity of CAD’s investigations are unprecedented.

Investigations have uncovered “actual facts” that indicate that the central figure behind the “improprieties” is Jho Low. Other key persons of interest are Jho Low’s associates such as Eric Tan and Al-Husseiny. Investigations indicate that Jho Low was a “key advisor” to 1MDB and SRC and was highly influential in decisions made by these companies…. [Prosecutor’s Remarks – bold added]

In the court documents the Singapore prosecutors have laid out in detail their findings that a) $1.03 billion dollars was stolen from the 1MDB investment into the PetroSaudi joint venture project by Jho Low b)  The claim that 1MDB later successfully sold out its interest in the venture was a sham to conceal the theft  c) Later, Jho Low, using his Singapore advisors like Yeo Jiawei at BSI bank “restructured the investment” to give the appearance of having cashed in their share in PetroSaudi and then used the proceeds to buy ‘Units’ in a specially formulated ‘investment fund’ based in the Cayman Islands named Bridge Global, which they bribed analysts to falsely value at $2.3 billion  d) the only ‘portfolio’ the specially formed “investment fund” had invested in was the self-same PetroSaudi venture 1MDB had pretended it had divested from at the same price  e) the only asset in that PetroSaudi venture (its investment in Venezuela) were two “aging drill ships” that were only worth a few million dollars – nothing like the $2.3 billion that the units claimed to be worth.

These findings by Singapore’s investigators match entirely the findings of the DOJ. The Singapore investigators also quote emails between the conspirators as evidence that the entire sham was planned and orchestrated by Jho Low and the likes of Yeo Jiawei were following his instructions.

The Singapore investigators make no bones about the fact that the whole enterprise behind the creation of the secretive Cayman Island fund in late 2012 and then the so-called Brazen Sky fund, 1MDB’s subsidiary which was supposed to be holding the ‘units’ for that fund, was to disguise the fact that Jho Low had stolen over a billion dollars from 1MDB via his company Good Star Limited and there was a whopping great big hole in the accounts as a result.

It’s all pretty incontrovertible stuff, judged in a respected court of law on the basis of evidence provided by banks and insiders. It also explains why 1MDB is so cash-strapped and it matches everything else that has been said by third party investigators ever since Sarawak Report first revealed the PetroSaudi data back in March 2015

Singapore also do not hold back over making plain that they regard Jho Low as the central figure, prime instigator and major beneficiary of the theft. Moreover, that he is a person of interest to them; that they are hunting him down and that far from being finished, their  investigation is on-going in relation to Jho and his key associates.

The tone of the Prosecutor’s mitigating remarks in favour of Yeo Jiawei holds a menacing significance towards Jho Low:

He [Yeo Jiawei] has voluntarily disgorged his ill-gotten gains, and has indicated his unequivocal intention to cooperate in CAD’s ongoing, wider investigations.

Singapore has not finished with 1MDB and they are after Jho Low.

Only the ‘Right Court’ Will Do!

So, perhaps it’s not surprising that over the past days Jho Low and Najib’s team have started altering their narrative over ‘waiting till being found guilty in a court of law’.  It now seems only certain courts will be entertained.

Places like Singapore and the United States are being dismissed as untrustworthy institutions – their findings dismissed as being biased, politically motivated and concocted as part of a ‘global plot’. 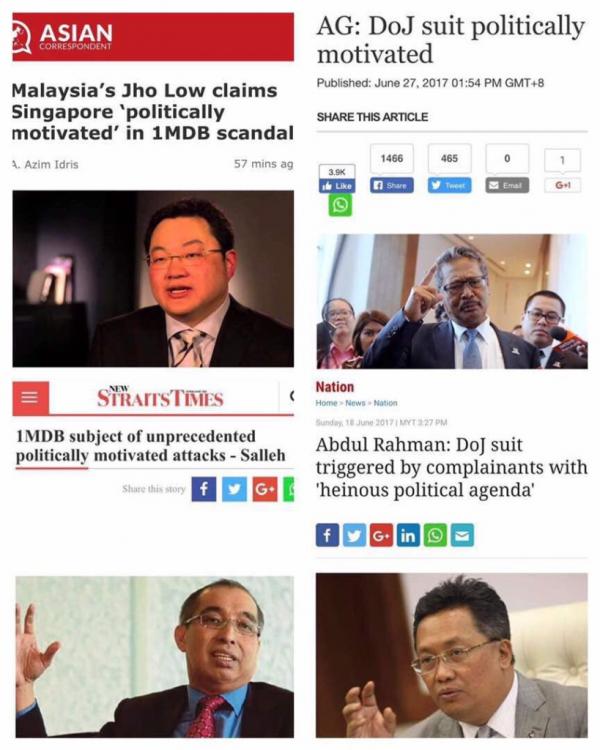 Najib’s key allies against a world “biased against us” – who to believe them or the rest of the world?

According to these statements the only courts likely to be regarded as objective and free from political pressure in this case are those in Malaysia, which Najib controls (for now at least).

But, this is not a single faceted drama.  In two weeks Najib is going to face the deadline for the first of the payments awarded by yet another court, the UK Court of Arbitration, in respect of 1MDB’s failed case against Abu Dhabi’s Aabar/IPIC.  The Minister of Finance will have to somehow find $620 million to prevent Malaysia going into default.  It has been alleged that he will do so by cashing in those units in Brazen Sky, which Singapore have just again confirmed are worthless.

Once again, therefore, come July 31st, Najib and his ministers will be exposed for saying one thing in contravention of what the rest of the world can read as plain facts.

It must be a tempting option to just ‘fess up and find a scapegoat. However, the Prime Minister cannot throw Jho Low to the wolves, as the young fraudster has carefully spelt out between the lines of all his statements.  Because, Jho is the prime witness in this case, who like Yeo Jiawei could provide evidence against the real decision maker behind the thefts at 1MDB: the sole sharehold and sole signatory, Najib himself.

It has narrowed the Prime Minister’s options and cornered him further, as UMNO consider what to do with their lame duck leader.  Over in KL talk of autumn elections has been put to bed, according to those near official circles.  Now united, the opposition present a major threat and Najib’s reputation is shredded with the electorate.

Instead, the Prime Minister has reportedly started asking around his advisors, the civil service and the military to see what support and mechanisms he can put in place to call that ‘State of Emergency’ he made provision for – so he can protect himself from this ‘global conspiracy’ to catch him stealing billions.

Such a ‘solution’ can only spell disaster for Malaysia.