The University Of Geneva Terminates Giannakopoulos After Bogus 1MDB Event

According to information received by Sarawak Report the decision was made owing to two glaring breaches of protocol now acknowledged by the University.  These plainly gave rise to a state of affairs that allowed for a completely fake ‘seminar’ to be conducted in the name of the University and on its premises.

Various Malaysian civil rights campaigners and 1MDB experts were invited to the event (including the Editor of Sarawak Report) and asked to share information with Giannakopulous and the makers of a documentary film. Sarawak Report has received evidence that the production was also penetrated by private investigators linked to KL.

Giannakopoulos himself is primarly a private investigator and has been identified as the Swiss representative of a company of corporate investigators, with a branch in KL that used his office number. 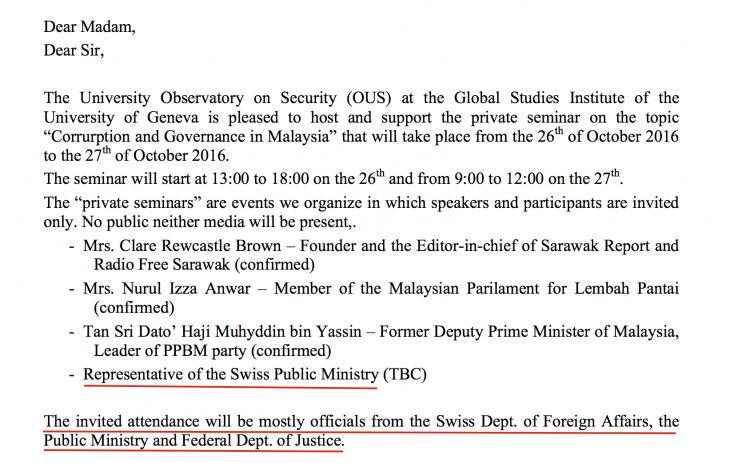 No promised Swiss officials attended the ‘Seminar’. Nor did Nurul Izzar or Muhyiddin

The first ‘breach of internal procedures’ at the University, according to our sources, was the fact that Giannakopoulos’s much vaunted appointment as ‘Vice-Director’ of the University Observatory on Security was not formally submitted or endorsed by the Global Studies Institute of which it was a part.  In other words Giannakopoulos had never been officially appointed to the position which he so loudly advertsied.

The second breach was that the funding of the seminar in question had never been formally submitted or endorsed by the Global Studies Institute.  Meaning that the University had no idea that the ‘seminar’ was taking place, even though attendees were formally invited in the name of the University and given to understand that the event was being paid for by the University.

At the very outset Giannakopoulos had told Sarawak Report that “the University is well funded for events such as this“.  Later when queried again as to whether the University had genuinely paid for the unusual gathering and if so why? Giannakopoulos had again said that the money came from the university, before eventually conceding that it ‘came out of his own pocket’.

Sarawak Report has challenged Giannakopoulos with the suspicion that the money in fact came from a client – presumably a client linked to Najib Razak, who has been probing for information about the state of the global investigations into 1MDB and spying on Sarawak Report and other civil society groups.

Better understanding by whom and for why?

“His relationship with the University of Geneva has now ended”

the University is believed to have informed certain people.  The decision by the University counters earlier suggestions that there had been nothing untoward with the event and that it was merely the case that Swiss officials and law enforcers, who had been promised to attend had unfortunately pulled out.

Sarawak Report suggests that the University ought to take a great deal more care to ensure that its good name is not abused by people such as Giannakopoulos, who issued formal invitations purporting to be from the University to all the attendees in order to lend credibility to an event that had not even been officially notified, let alone authorised or funded by the academic or administrative management.

This was an effective insult to all those who took the time and trouble to attend, made far worse by the fact that the purpose of the event was to pry and spy on people, who thought they were giving information in a confidential and safe environment.

In fact, the University has in one letter gone so far as to criticise the Editor of Sarawak Report for having publicised this disgraceful state of affairs, accusing her of being the only one to ‘break the confidentiality of the seminar’ in the course of bringing this scandal brought about by their negligence to public attention.  The criticism entirely overlooks the fact that the entire exercise was plainly designed to spy on the guests and pass information back to Malaysia.

In one leter the Univesity attempting to blame Sarawak Report’s editor for breaking the confidentiality of the meeting set up to spy on its attendees.

Sarawak Report suggests that rather than sniping at the publicity that forced them to rectify this scandalous state of affairs in their University, the administration would do better to issue formal apologies to all those who attended the event under false pretences.