Rosmah's Tour Of Top Places In The UK Kicks Off..

Once again it seems that other countries and foreign educational institutions are set to do well out of Malaysian largesse, whilst schools back home and especially in East Malaysia are facing tough times and the impact of the dwindling ringgit.

The Bernama press release at the weekend was somewhat imprecise about the exact nature and purpose of ceremonial undertakings that would involve the Royal Society in London, Cambridge University and the School for Islamic Studies at Oxford University, which recently received a large donation from Malaysia.

However, what is implied is that Rosmah is organising for 32 ‘gifted’ PERMATA students and 6 teachers to spend two weeks in London to take part in a “program [that] aims to provide opportunities for smart and talented students to carry out Science, Technology, Engineering and Mathematics or STEM-based activities at several universities, like Cambridge University, London College University and ICL London“.

‘Letters of Intent’ are due to be signed and the aim is for the students to get the opportunity to “carry out research with renowned scientists” from Cambridge University, while PERMATA is still ‘exploring for cooperation opportunities” with the Oxford Centre for Islamic Studies, according to Bernama.

Sarawak Report has contacted Cambridge University’s communications department for further details, which did not immediately appear to know about the event and has yet to get back to our request for what information they can find.

Sarawak Report wonders how much 32 students can actually learn over two such weeks and how much all of this is likely to cost and who is funding this PERMATA programme?

Most particularly, are any of the British institutions, who are becoming involved in this event to further promote the life-chances of some of Malaysia’s already most privileged students, receiving Malaysian money for taking part?

We suggest that institutions like Cambridge and the Royal Society etc should take a very diligent look indeed at Rosmah Mansor and the sources of her funding before accepting a single penny, if they are indeed proposing to receive money for lending their renowned scientists for a day or so to this programme.

After all, her husband is caught up as the prime actor in the world’s largest on-going kleptocracy case, as readers of Sarawak Report and any financial paper will be well aware.

What’s more, her husband’s government has refused to cooperate in mutual legal assistance requests from countries such as Switzerland and the US, which are trying to investigate this 1MDB scandal from which Switzerland has confirmed that at least $4 billion (in fact a great deal more) has gone missing.

To the contrary, Najib illegally fired the Attorney General, who had tried to instigate an enquiry and who drafted charges against him personally in the process.  He then appointed a crony who declared the ‘case closed’ in the face of official protests from the Malaysian Anti Corruption Commission and the Bank of Malaysia and the united voices of the opposition, civil society and many from his own party in Malaysia.

Sarawak Report has also demonstrated in various ways how the super-high-spending Rosmah has been herself directly implicated in the missing money traced back to 1MDB and also other huge mysterious bank deposits of cash, unearthed by Malaysian investigators into the scandal.  Over a million ringgit of diverted 1MDB money went into her personal anti-ageing treatment for a start. Then there were gargantuan shopping trips for diamonds, luxury furnishings and fashion goods on cards funded by money taken from 1MDB. 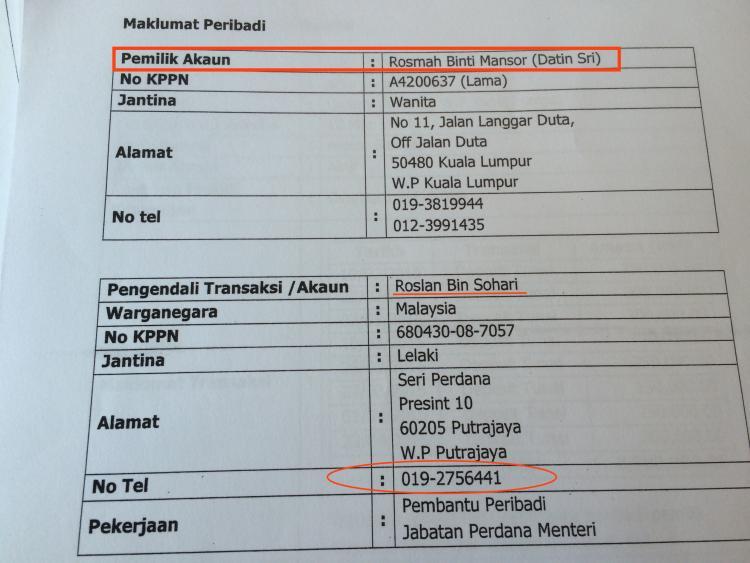 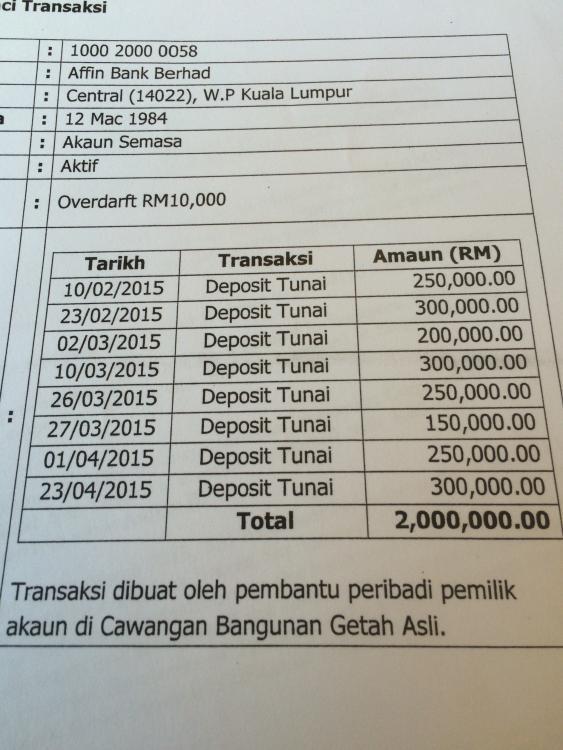 But that is just the tip of the iceberg as reams of documents released from the closed enquiries bear testimony.

Najib has featured in the US Department of Justice’s one billion dollar asset seizure related to 1MDB’s laundered money under the title of ‘Malaysian Official One’, who signed off all the deals and who received over a billion dollars back from 1MDB into his private bank account in KL – including a notorious $681 million payment in March 2013, just before he bought the 2013 election.

Britain’s top institutions would not like to be thought of as ‘bought’ also, would they?

Rosmah’s own son, Riza Aiz, is also personally named on that DOJ court filing for having used 1MDB money to fund the $100 million film Wolf of Wall Street and two properties in the US and a large Belgravia London townhouse, which are all now frozen under the court order.

However, a very great deal of the missing money from 1MDB is still unnaccounted for and it would be troubling if any of it had found its way into this image-boosting programme for Rosmah Mansor in the UK.  Perhaps, PERMATA, the Universities and the Prime Minister’s Office could release clear and precise figures in order to reassure the public and all those concerned?

Any clean money that is going spare in cash-strapped Kuala Lumpur is (by the way) badly needed by local schools for more ordinary children, which have seen cutbacks in recent years, causing concern about the funding for well-heeled foreign institutions like Nottingham University, Najib’s alma mater, which enjoys considerable benefits from close links to Malaysia in the UK.

Of course, top British advocates of Malaysia ties, in particular the cheerleader for trade, Lord Marland, pooh poohs this fussy approach towards Najib Razak. He organised Najib’s London trade conference last year, just a few short weeks after the spate of damning indictments and statements from global regulators, telling journalists that he thought Najib should not be considered tarnished until proven guilty in a court of law – presumably Malaysia’s.

Marland considers his negotiation of the injection of Malaysian money into the London Battersea Power Station development as one of his finest hours in Government, according to his statements. However, he is primarily still a businessman, of course and it has been recently revealed that he is a substantial shareholder amongst other things of the controversial election manipulating outfit called Cambridge Analytica.

Cambridge Analytica has been credited with having helped influence voting patterns over Brexit and Donald Trump, by using big data snooping to work out how to attract individual voters towards a certain client camp.

Cambridge Analytica’s parent outfit SLC has now opened a branch in KL with elections looming. It is run by a former UMNO communications man.  SLC is also has a corporate investigations and PR wing, whose Swiss representative was the PR man Nicolas Giannakopoulos, who engaged with Sarawak Report and opposition figures through a bogus Geneva University ‘seminar’, which appeared to be mainly targetted at fishing information about the investigation into 1MDB.

So, it is perhaps of passing interest that Lord Marland’s Cambridge Analytica was the very company that was last year advertised as the sponsor of Rosmah Mansor previous PERMATA tour of Turkey, just three weeks after Lord Marland’s doughty defence of her husband in London.

So, is Cambridge Analytica assisting this latest PERMATA programme in the UK?  Alternatively, is the  Commonwealth Enterprise and Investment Council, of which Marland is Chairman, supporting it in any way? It always helps to have fans in the right places.

Rosmah’s bid for international recognistion through PERMATA has not gone entirely smoothly so far, however, thanks to the impact of 1MDB.  Last year there was a last minute reversal of a plan to present her with UNESCO’s ‘Lead By Example Award’ in New York, for the alleged work by the organisation to ‘counter extremism through the education system’.

That ideal will somewhat conflict, in ‘liberal’ minds at least, with her husband’s recent support of bids to strengthen Sharia law over Malaysia’s existing civil codes, in return for the political support of the Islamic Party PAS. Last week Najib also dished out RM80 million to private Islamic religious schools, in what was further seen as a blatant bid to curry similar favour on the eve of the PAS Annual Conference. The conference voted to end its longstanding cooperation with the opposition alliance parties.

These schools focus on teaching religious texts by rote, leading to concerns that they are providing limited education opportunities in such areas as the science, maths and technology espoused by PERMATA and could be contributing to what many worry is growing extremism in Malaysia. Last week an 11 year old boy died following a regular beating at one such school. The state religious department, which registered the school, rapidly ruled that there was no responsibility on the part of the school authorities.

The Prime Minister s wife, Datin Seri Rosmah Mansor, who is patron of PERMATA Programme, will be in London, in the United Kingdom, from tomorrow until May 10 for a visit to expand the PERMATA programme.

The Foreign Ministry, in a statement today, said she is scheduled to give a speech and open the Nobelist Mindset, a program organised by PERMATA Pintar with the Royal Society of London.

The program was started in 2012 with the New York Academy of Sciences, United States of America, and has since been expanded to involve similar cooperation with the Royal Society of London and University of Cambridge, United Kingdom.

The Nobelist Mindset program aims to provide opportunities for smart and talented students to carry out Science, Technology, Engineering and Mathematics or STEM-based activities at several universities, like Cambridge University, London College University and ICL London.

A total of 32 students from the PERMATA Pintar College, PERMATA Insan College, MARA College, national secondary schools and public universities, as well as six teachers, will participate in the programme to be held in London for two weeks, it said.

Apart from that, Rosmah is also scheduled to witness the signing of two Letters of Intent (LOI) , one between PERMATA Pintar and Cambridge University, and the other, between PERMATA Insan and Oxford Centre for Islamic Studies, University of Oxford.

The collaboration with the Cambridge University is aimed to enable PERMATA Pintar students to carry out research with renowned scientists from the university, while PERMATA Insan will explore for cooperation opportunities with Oxford Centre for Islamic Studies, it said.