Numerous regulatory ‘Red Flags’ have been ignored over the years by banks and overseers, according to their research, which has allowed this politically connected family to acquire hundreds of millions of dollars worth of assets in Canada and to raise several enormous commercial loans.

BMF also provides compelling evidence that the family representatives who manage the Sarawak Governor’s wealth in Canada, namely his daughter Jamilah and her husband Sean Murray, are using their extensive political and financial influence to fend off investigations by the authorities. 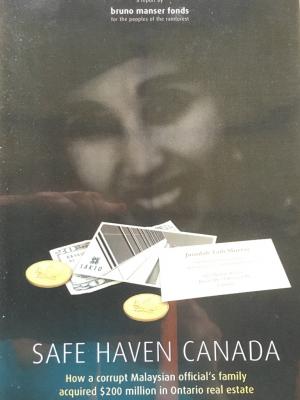 Their report titled “Safe Haven Canada” consists of a detailed overview of known properties owned by the Taib-connected Sakto Group of companies in Canada, which they say are conservatively valued at a minimum of $200 million.

It charts the history of Sakto Development Corporation and its related companies, which were set up by Taib Mahmud’s brother Onn Mahmud in 1983, shortly after Taib because Chief Minister, together with Taib’s daughter Jamilah and son Abu Bekir (mere college students at the time).

Taib has later admitted that the original investment in Sakto had come from him, describing it as a “small gratuity” received on his retirement as a minister in the Federal Government (a payment that has not been fully explained nor the amount disclosed).

In fact, within a year $4.5 million had been invested by its shareholders in the purchase of 400 properties, according to research by Sarawak Report and financial records for the next ten years obtained by BMF showed that tens of millions were invested during those early years, establishing the likely pattern over following decades.

On one occasion a $20 million loan was extended through the controversial Richfold Limited in Hong Kong, which was linked to the Japanese shipping kickback scandal extensively covered by Sarawak Report, which unearthed documents that rebut Taib’s later attempts to deny money was paid to his companies by Japanese timber exporters.

BMF revealed that the loan was extended by a collection of family members, including Taib’s now deceased wife Jamilah as well as two Taib companies, Richfold in Hongkong (a sister company of the timber kickback company Regent Star) and Sogo Holding, based in Jersey.

Sakto shareholders are the Taib family 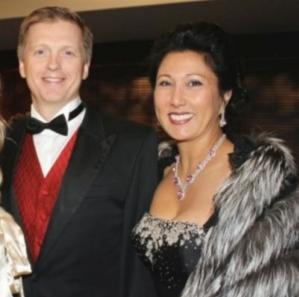 The report points out that journalists have now established what the Sakto Group’s directors (namely Jamilah and her husband Sean Murray) have sought to disguise for many years, which is that Sakto’s original and present shareholders are all members of the Taib family, from the time when Jamilah was a mere student.

According to a statement sent by Sean Murray to a Canadian newspaper last year the shareholders are Jamilah and three other Taib family members including Onn Mahmud, Taib’s younger brother, who handled all his family business dealings while his children were still too young to front such operations.

This confirms that Sakto and its related entities were always Taib family companies, rather than a Murray family companies as managers attempted to suggest before being exposed by Sarawak Report. 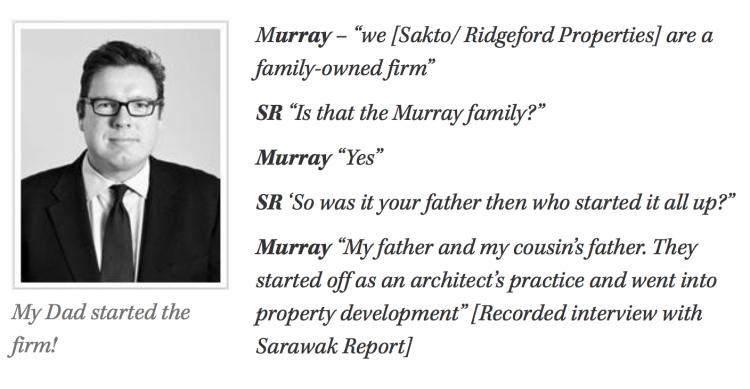 Lawyers acting jointly for Taib and for Sean Murray even attempted to intimidate Sarawak Report and BMF saying they should retract their remarks, since no money had ever gone from Taib into Sakto: 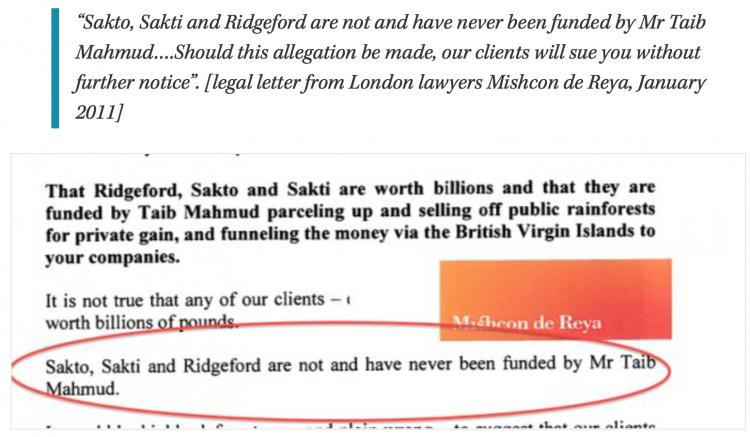 Sarawak Report did not withdraw the claim and Mishcon de Reya failed to carry out its threat to “sue without further notice”. Later, Taib’s acknowledgement he had in fact put up ‘small gratuity’ to start up Sakto’s multi-million dollar ventures proved that the above legal threats had been based on lies.

BMF documents how Jamilah likewise herself has attempted to deceive people over the origins of the company’s investments, by implying to journalists during the 1980s that there had been around 10 -12 shareholders from different parts of the Pacific region, not just family members as has now been admitted.

It means that the Taibs and Murrays have persistently lied over the years in order to attempt to disguise the fact that the money coming into this major Canadian property company originated with the Taib family in Sarawak – a politically exposed group of people who had no legitimate means of acquiring such sums. 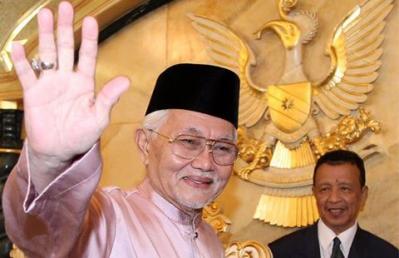 Despite this extensive research and the clear proof now available, BMF says it has become outraged over the continued failure by the Canadian authorities to act in setting up criminal investigations into money laundering concerns regarding Sakto.

Neither have the major Canadian lending institutions, such as Manulife (which opened an office in Sarawak during the period Taib was Chief Minister) and Royal Bank of Canada, operated mandatory Red Flag proceedures in the course of lending to these politically connected companies, associated with a notoriously corrupt third world leader.

In the case of one lending institution, BMF was advised to report the matter to the police and not to bother the lender.

There is concern that the Taib/Murrays, who are major political donors, have achieved undue political influence in Ottawa, Canada where they now rank as one of the country’s largest property developers thanks to the huge injections of illegal cash from Sarawak’s Taib Mahmud.

An example of undue political influence was the cancellation last month of a draft OECD report in Canada relating to the Sakto Group, which had been prompted by BMF’s concerns.

In October 2016 the Canadian National Contact Point on the OECD Guidelines for Multinational Enterprises issued a draft report on the concerns raised by BMF about Sakto’s lack of transparency over its finances and shareholders.

Mysterious change of tune from Canada’s representatives to the OECD

This extensive and detailed  11 page document upheld each and every one of BMF’s concerns and denied counter-arguments put forward by Sakto lawyers during the negotiating process.

Its stark recommendation was that the OECD should proceed to a full review of the Sakto Group and the complaints relating to its shortcomings, referring in the process to OECD guidelines supported by the Government of Canada.

This would have resulted in a major reputational set-back for this Taib/Murray enterprise and BMF eventually became aware of a considerable delay in proceeding to the review.  When the NGO enquired about the delay the OECD officials explained in November of 2011:

“The NCP has received extensive commentary from Sakto’s legal counsel, which we are now in the process of reviewing. We thank you for your understanding. Please be assured that the NCP is doing its best to move this process forward as quickly as possible.”

Six months later, however, instead of proceeding to the review, the Canadian OECD Contact Point completely reversed its original recommendations, without providing a single explanation why!

A new Draft Assessment was created, which consisted of a mere one and a half pages, simply dismissing the complaint, without any of the detailed breakdown provided by the original document that had supported the BMF concerns.

In a brief letter, the Chairman of the Canadian National Contact Point (NCP) for the OECD explained merely:

‘The NCP regrets that the process has taken longer than usual. The NCP has duly considered the submissions from the parties and conducted its due diligence in the most expeditious manner as was possible…..”

Lukas Straumann, Director of BMF, has expressed his outrage at the clear interference by Sakto and the lack of transparency over the Canadian officials’ own volte-farce, for which they have offered no credible explanation whatsoever”

“The Canadian NCP of the OECD produced an extensive initial draft assessment that was highly detailed and closely argued, according to the legal position and guidelines on OECD policy. This initial assessment accepted BMF’s position on each and every point and rejected Sakto’s own submissions. It made clear that the Taib family’s Sakto group is indeed in breach of the OECD’s disclosure standards for multinational enterprises. That process had taken over a year.

Then, suddenly, a last minute heavy intervention by Sakto’s lawyers was allowed to delay the entire process and the NCP went completely silent about what new representations were being made or what other interferences were taking place.  The outcome has been a total reversal of their original closely explained findings, which has been replaced by a one page rejection of our submissions, without analysis or explanation. Where is the supposed transparency required by the OECD’s own guidelines, which the Government of Canada is supposed to adhere to?

This is a hugely shameful episode for the Government of Canda and exposes its institutions as being unduly subject to pressure from secretive corporations like Sakto, which is now known to be entirely run and owned by a notorious political family in Malaysia, which is a country presently under the international corruption and money-laundering spotlight owing to the massive 1MDB scandal”

BMF has launched an open demonstration in Ottawa today, pointing out that it is Canada’s unusual lack of transparency over corporate public information that has made it a magnet for kleptocrats like Taib Mahmud, along with other persons of dubious wealth.

Shareholders of companies are allowed to remain secret in Canada. Neither do corporate annual accounts have to be made publicly available. This means there is far less information available to explain the ownership and value of companies in Canada than, for example, in Australia, the UK and most states in America.

The message to Canada is clean up your act, before your image is further tarnished.

You can read the report by accessing the Bruno Manser Fund online site.