Several months late PetroSaudi International has finally filed its 2015 Annual Report to Companies House in London. They did so on January 11th, two days after Sarawak Report reported on the company’s delayed accounting and Venezuela problems.

That report has born out our conclusions that the supposed major Saudi oil company is in fact floundering and in deep financial difficulties, its investments of 1MDB injected cash having proven to have been badly judged.

After all, the directors had plunged virtually the entire amount of their 1MDB nest egg into Venezuela, which arguably suffers even worse corruption problems than Malaysia.

This is how the company admitted via its auditors that there is a very real risk of it failing to be able to continue as a going concern:

“There is a material uncertainly over the group’s ability to continue as a going concern as a result of a legal dispute PetroSaudi Oil Services (Venezuela) Limited (POSAVL) has with its main client, PDVSA Servicios S.A (PDVSA), regarding unpaid invoices under a drilling contract entered into between the parties in 2010.

PDVSA is disputing an amount of approximately $65m relating to work performed pre-February 2013 and approximately $175m for the period Jan 2015 – April 2016, for which they are claiming reimburseent of paid invoices. PSOSVL are counter-claiming $138m for unpaid overdue invoices in the same period plus interest of $22m.”

Under the heading Note 1 – going concern, the company report (see below) explains that this matter is now under arbitration with the UN Commission on International Trade with the finding yet to be produced. Whether Venezuela would even pay up if it lost is not reflected on.

The report also refers to PetroSaudi’s recent attempt to force payment of a letter of credit on behalf of Venezuela in a UK Court, which we reported they lost last October, owing to evident fraud on their part.  According to the company, they have appealed against this UK court judgement and if they can win either of the two above cases they hope to be able to recover their position.

However, if PetroSaudi loses the arbitration and the UK court appeal, they acknowledge that the group will go under and the UK companies will not be able to pay their debts. 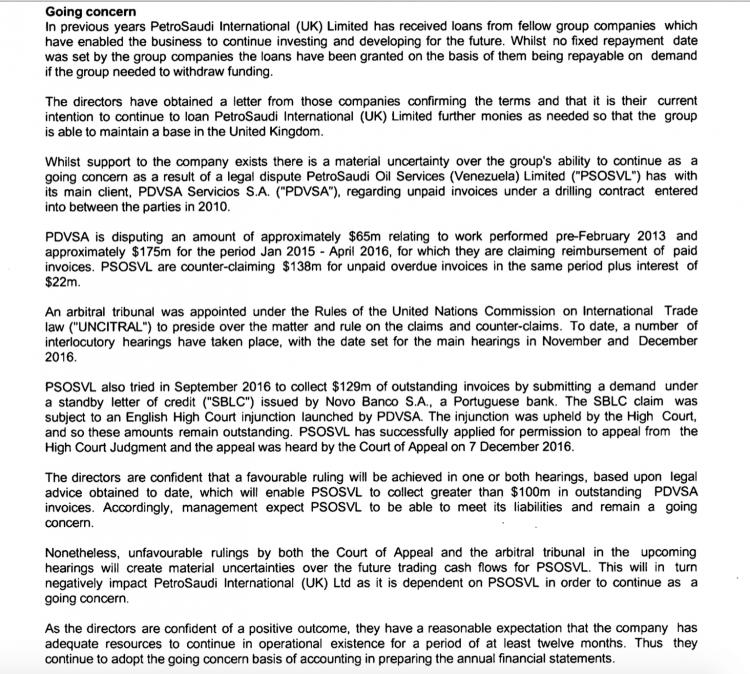 Proof positive that the PetroSaudi 1MDB JV was a sham

There are immediate questions for Malaysians that arise from this stark presentation of the reality of PetroSaudi’s finances.

For years 1MDB and its boss Prime Minister Najib Razak have insisted on claiming that PetroSaudi was a major international oil company with vast oil assets to back its financial position. The company was, Najib claimed, an arm of the Saudi state, and the joint venture 1MDB engaged in was therefore a ‘government to government’ investment with a solid going concern.

Critics immediately pointed otherwise, saying there was no evidence that PetroSaudi had any serious resources or represented more than an opportunistic shadow company headed by a couple of young adventurers, one of whom happened to be a son of the former King of Saudi Arabia (Prince Turki resigned from all involvement in PetroSaudi soon after the 1MDB scandal broke in 2014).

Back in 2015 Sarawak Report demonstrated that the so-called valuation of the company, which was presented to 1MDB, indicating that it had resources of $3.5 billion dollars, was a sham. 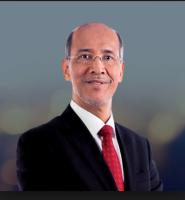 Later revelations have shown that the Chairman of the 1MDB Board resigned his position when the joint venture was forced through against Board wishes, in advance of their demand that a proper independent valuation of PetroSaudi was produced.

If that proper valuation had been allowed to take place, then it would have become perfectly clear that the boys from PetroSaudi didn’t have a bean and that the company’s entire subsequent investment has been based on the $300 million it obtained from acting as a front for Najib and Jho Low’s scheme to siphon further billions out of 1MDB through the guise of this joint venture.

That money has now apparently been lost and there is no evidence whatsoever that 1MDB recovered a cent of its $1.83 billion investment, let alone collected a profit, which is why its own auditors KPMG and then Deloittes were fired and resigned respectively and have refuted their accounts.

UPDATE:
Note there is another company that has been equally tardy in filing their accounts. This is the “Cyber-Intelligence” firm Protection Group International (PGI), whose Managing Director Brian Lord took it upon himself to accuse Sarawak Report of forgery, lies and political bias:

“Our investigation is still ongoing“, he claimed back in July 2015, “but it is clear that we are looking at a case of large-scale data theft.. published on Sarawak Report….. ” He went on:

‘There are many inconsistencies between the published data and the data which still exists on files within PetroSaudi relating to that period of time. Simply put, it is incomplete data, creatively selected and edited to fit a desired narrative. “These cases are all too familiar and we have unfortunately dealt with so many of them; where a greedy or malicious employee removes confidential data and threatens to publish it, or has it published, for personal gain – financial or otherwise. Published data then invariably goes throughselective editing, and not infrequently plain forgery, in an attempt to up the ante and create the most damaging story possible. “This case is an almost textbook match to that profile. PetroSaudi, like many companies, individuals or even governments that we have seen before them, and no doubt will continue to see after them, will suffer unfair scrutiny caused by a misinformed online onslaught. In this case, what started out as a simple story of personal gain by a former employee, became a story of politically-motivated allegations through the use of irresponsible online blogs.” [New Straits Times]

Lord and his company PGI then claimed that they would be doing extensive laboratory work to prove the allegations that he was making, something he had demonstrably failed to do at the time of speaking out. Nevertheless, in the meantime, he spoke once more to the newspapers to put the boot in again with yet more unsubtantiated allegations against the integrity and honesty of Sarawak Report:

“Having gone through the process of trying to extort money from the former employer with threats to leak the data and being refused, he (Justo) could have still gone to the authorities had there been any wrong doing. But he chose to go to Sarawak Report…..

“I am not making any comment on the political persuasion of Sarawak Report but he chose to take it to that kind of blog site. So even before we move on to the forensics, any information that he presented to the public after that process has to be treated with a huge amount of caution,” said Lord who has more than 20 years experience in cyber security….

“It is a combination of all those three things; inconsistency between the original and published reports, substitutable communication and the whole private information claim into Sarawak Report … I can firmly say the information is unreliable and, therefore, it is unfair for anybody to draw judgments on it.”

When challenged by our lawyers to explain his outbursts on behalf of PetroSaudi, which had paid PGI to conduct its “cyber-intelligence”, the company stayed mum.  Eighteen months on the company has yet to produce the slightest shred of further evidence (despite its claim to have initiated a ‘forensic laboratory investigation’) to stand up its defamatory claims. 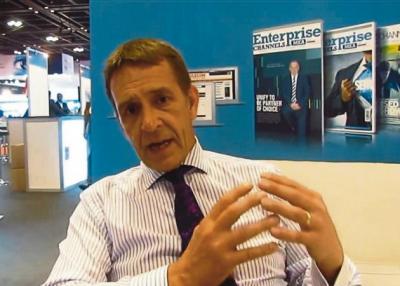 Cyber sleuth or just gob for hire? Brian Lord was paid by PetroSaudi to defame SR and Xavier Justo

To the contrary, the FBI, who are indeed highly equipped with intelligence tools, have stood up each and every word of Sarawak Report’s reporting and has started devastating proceedings against the thefts of billions of dollars aided by PGI’s clients in this matter, the company PetroSaudi.

It does not give much reason to trust PGI’s intelligence or integrity, because not one whisper of an apology has been made by that company, either directly or indirectly, in this matter to Sarawak Report, Xavier Justo or anybody else. What is more they are plainly complete clots who got themselves the wrong clients and backed the wrong story.

Is this why no one is hiring them any more and why they have failed to file their 2015 accounts? 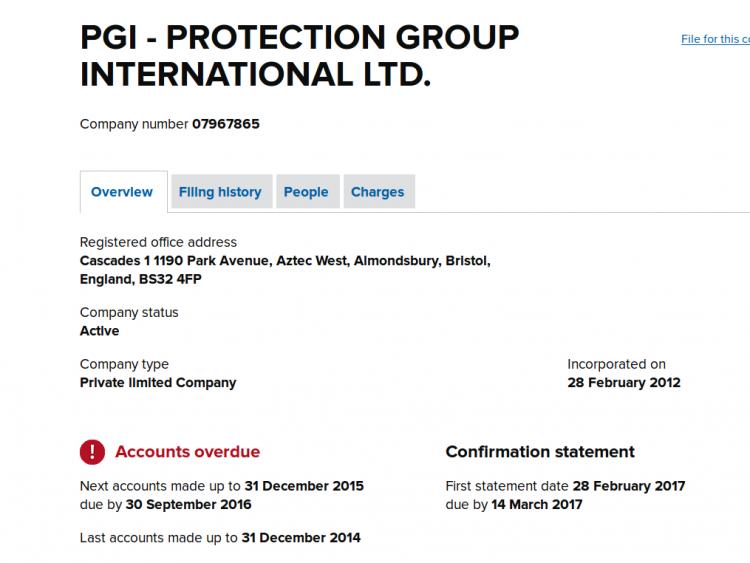