Najib Razak has been desperately seeking to instil military discipline into his UMNO ‘troops’ during their recent Assembly, decking all of them out in different coloured uniforms each day like Rosmah’s handbags, as if he were some mad dictator.

This is not least, of course, because he is a mad dictator.  He has ditched the requirement to re-elect him to his party position until after the next election, precisely because he fears they would take the opportunity to replace him. 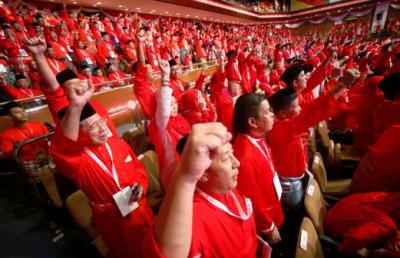 Indeed, whilst he yesterday made ‘cleansing the party of traitors’ his prime target before facing the electorate, there are those who believe that voters would prefer to see a cleansing of the party.

Even the opposition believe that keeping dirty Najib in post is by far their best option for the threatened snap poll.

Najib’s big message therefore was that UMNO party members must obey him. Forget obeying the law, forget obeying the principles of right and wrong or indeed obeying the constitutional authority of the public who elected them. They must only obey him.

And, since he pays them, they all were happy to shout and wave and applaud as one corrupt leader after another was paraded up on stage and as Najib issued blood curdling Jihadist threats against political opponents and minority communities, as if they were an opposing army instead of neighbours with democratic rights.

This is what Najib has done to his party and to Malaysia, simply because he cannot give a straight answer to the question ‘What did you do with the money from 1MDB?’.

Meanwhile, neighbouring Singapore heaped yet more international humiliation on the Prime Minister, who had to sack his own Attorney General and Deputy (and many more besides) in order to pretend he didn’t steal billions from the public.

As the UMNO goons (all decked out in blue today) whooped and cheered, Singapore fined Coutts Bank and Standard Chartered, both for transferring money that the Monetary Authority described as having been misappropriated by 1MDB.

“The Monetary Authority of Singapore (MAS) has imposed multi-million dollar fines on the Singapore branches of Standard Chartered bank and Coutts & Co for breaching anti-money laundering regulations in relation to 1MDB-related fund flows through these banks, it said in a release on Friday (Dec 2).

Najib has, as we all know, declared that no money was misappropriated from 1MDB. He has also said that the $681 million that popped up in his personal account, which the US Dept of Justice traced back to 1MDB, in fact came from a secret Saudi Sheikh.

What are genuine good Muslims or good Christians or good anybody to make of such behaviour?

It seems not only has this man made his country financially bankrupt, he has made his party morally bankrupt.

Bonuses – what do ‘Fat Mike Sherwood and Najib have in common?

Indeed, there is good reason to believe that Najib’s sudden fighting talk about a snap early election is precisely because he is fearful of further damning revelations from the international investigations into the world’s biggest ever kleptocracy scandal. 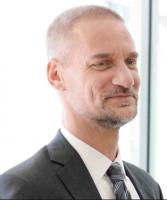 Singapore has not only moved against these two banks.  The Monetary Authority also inflicted a ten year ban on the former Asia boss of Goldman Sachs.

Tim Leissner, a personal friend of Najib’s and Jho Low fixed up all the dodgy 1MDB bond deals totalling $6.5 billion, through the agency of corrupt collaboration with two Abu Dhabi fund managers working for Aabar.

The bank had already sacked Leissner and he is said to be cooperating with the US financial authorities, who are also investigating this, the world’s biggest single kleptocracy scandal ever, in a relentless fashion.

Few observers of 1MDB are in any doubt but that the distinctly fishy Goldman commission on those bond issues hides further dirty corrupt practices that appear to have involved more massive kickbacks for Jho Low’s ring of fraudsters serving Najib and rich payments to those who collaborated from other outfits.

The grilling of Leissner and others ought flush out the truth, sooner rather than later.

Fat Mike was till that moment considered a major contender to take over the top post at the bank, having built up its ’emerging markets’ business in a quite spectacular fashion in those lean post-crash years, just as 1MDB was getting going.

A big part of those fantastic profits were owing to 1MDB and today Singapore’s Monetary Affairs Authority confirmed that Sherwood signed off on those bond deals:

“Mr Leissner, who left Goldman Sachs in February, managed the client relationship with 1MDB for all of its three bond issues from 2012-13.

A team of Goldman Sachs staff, mainly from Hong Kong but also from Singapore, Malaysia and the United Arab Emirates, arranged the bond issues and they were fully underwritten by London-based Goldman Sachs International, the MAS said.[Financial Times]

Should Sherwood have judged differently on touching such a deal and indeed on releasing an offer document that praised 1MDB for having a ‘robust three tier management structure free from political influence’ when in fact the fund was completely controlled by Najib and half the money raised was stolen on day one?

Perhaps, if this was not the actual reason Fat Mike resigned, then it should have been and perhaps soon we will receive the opinion of US regulators on the matter also?

Consider the news that made Fat Mike so famous back in the UK in the first place.  It was the fact that in the depth of a belt tightening recession for everyone else (as a result of a financial crash for which Goldman Sachs was in very large measure responsible) he and his UK international team issued the biggest bonuses ever in the winter of 2014.

Sherwood himself clinched no less that £13 million newspapers estimated.  Significantly, this hand-out was not for profits made that year, but the previous year of 2013 – exactly when GSI was reaping in its nearly $700 million reward, purely for having raised three dodgy bond deals for 1MDB: 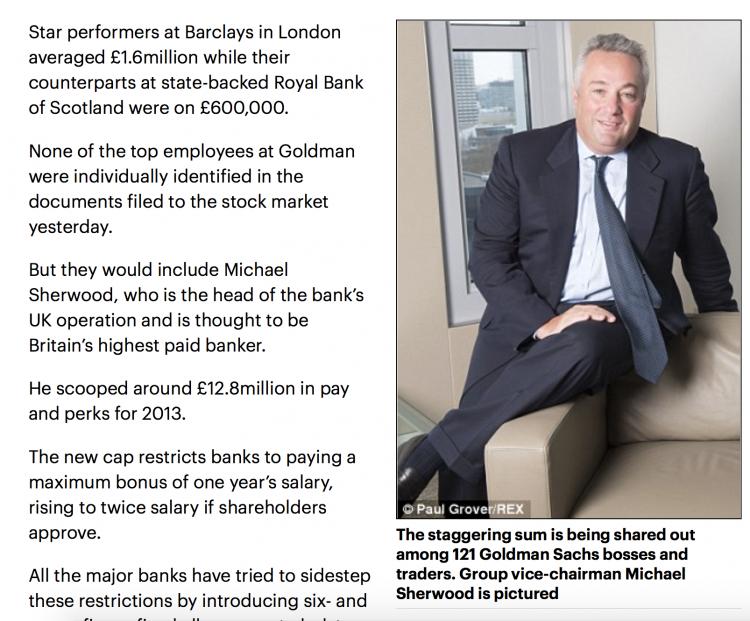 Fat Mike Sherwood – did he bow out before the news about his 2013 bonus comes out?

So, like Sherwood, has Najib also decided to move before things get worse and to throw caution to the winds with a snap election before even more gets out about 1MDB?