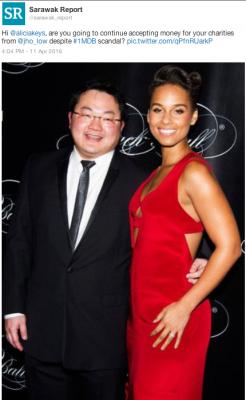 The truth is now in court…

1MDB and its ultimate boss, PM Najib Razak, continue to say there was “no wrongdoing” at the fund and are blocking all investigations into billions that have gone missing.

However, papers now before the Singapore Courts have added to the mountains of evidence that show otherwise.

They include bank statements which show that Jho Low used money stolen from the company’s so-called Power Purchase loan in October 2012 to pay a Hollywood Rap Star called Swizz Beatz $800,000 to perform at his lavish 31st birthday event in Las Vegas a fortnight later.

The discovery shines further light on the extraordinary sums that Jho was throwing about Tinseltown in order to buy his way into top friendships, all at the expense of Malaysia’s borrowed development money.

It also gives an insight into the sorts of fees certain entertainers have learnt to expect and Sarawak Report cordially invites the well-heeled Mr Swizz Beatz to repay this stolen development money, taken from the mouths and education of poor Malaysian kids, back in some form where it will not be re-appropriated by the present Prime Minister. 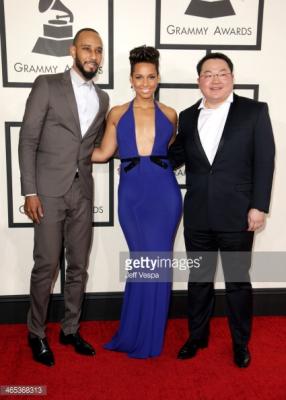 The evidence comes from bank statements and charges now laid in open court relating to the case against the former senior BSI banker Yak Yew Chee, who pleaded guilty to the bulk of the charges against him some days ago.

Compiled by investigators from the Singapore Commercial Affairs Department they demonstrate clearly how money was stolen from the $1.75 billion ‘Power Purchase’ loan raised by Goldman Sachs in October 2012 and then channelled to private accounts.

In short, 1MDB Energy Langat, which had opened an account at the small Falcon Private Bank owned by the Abu Dhabi fund Aabar, first sent $790,354,855.00 to what has become known as the Bogus Aabar BVI account held at BSI Bank in Lugano shortly after receiving the proceeds of the bond issue on October 22nd 2012.

The Bogus Aabar account was opened by the two Aabar senior officials Chairman Khadem Al Qubaisi (KAQ) and CEO Mohamed Al Husseiny, but had nothing in fact to do with the sovereign wealth fund they were managing of the same name.

From there on the following day, October 23rd, two transfers were made to a couple of ‘fiduciary funds’ favoured by Jho Low named Enterprise Emerging Markets Fund and Cistenique Investment Fund, which were based in Curacao and held accounts at the Dutch giant ING.

Enterprise Emerging Markets received $76,530,613 and Cistenique received $290,816,327 and both funds received signed instructions from KAQ and Husseiny to immediately transfer the money on to another bogus off-shore company named Blackstone Asia Real Estate Partners Limited (BAREPL) in BVI with an account at Standard Chartered Bank in Singapore.

The registered owner of that account was Jho Low’s agent Eric Tan and the transfers were made the very same day, October 23rd. 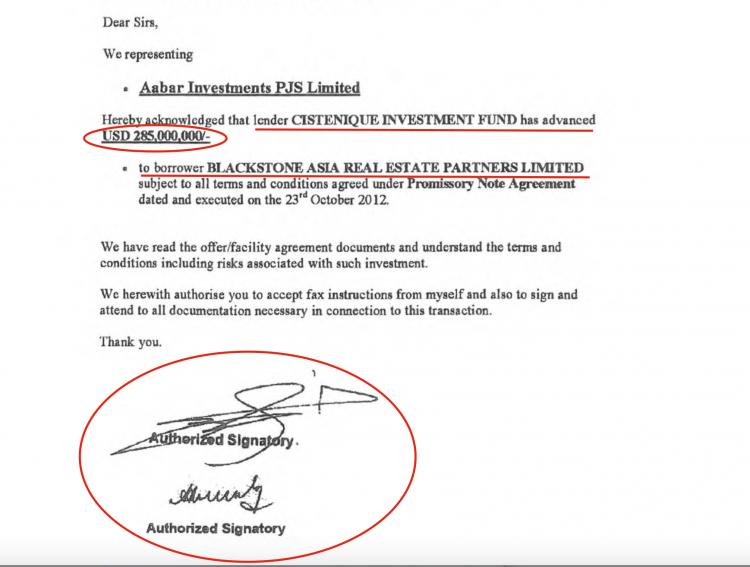 Signed by Bogus Aabar Directors KAQ (top) and Husseiny (below)

For their pains in enabling the same day transfers, these two Curacao ‘investment funds’ were both paid a 2% ‘Subscription Fee’ and a 2% ‘Annual Management Fee’, agreed to and signed for by both KAQ and Husseiny. The two directors also signed a form indemnifying BSI Bank against any possible loss of the money as a result of the ‘fiduciary investment’ into Blackstone.

The Singapore sleuths have next identified that BAREPL transferred two massive payments of $35,000,000 and $224,800,000 into another account owned by Eric Tan at Standard Chartered Bank under the name of Alsen Chance Holdings Limited.  The statements on that account, which are annexed to the charges against Yak in the documents before the court, show that on 22nd October a payment was made from Alsen to Swizz Beatz Pro of $800,000. 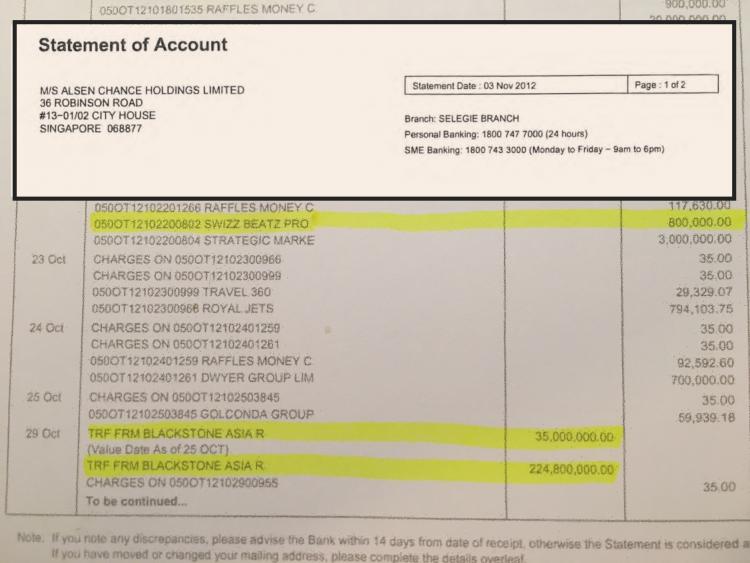 Just prior to this payment to Swizz the Alsen account had been running below $100,000. However, on 17th of October a $33.5 million payment had come in from none other than Good Star Limited, the Jho Low owned company which received over a billion dollars in kickbacks from 1MDB’s original PetroSaudi deals.

Payments came in from Good Star.. then at the end of the month the account was cleaned out to Good Star again

On 3rd of November almost the entire amount was then transferred back to Good Star, with a $200,000,000 payment.

Party Of The Year In Las Vegas

The following day 4th November was Jho Low’s 31st Birthday at which Swizz Beatz performed in what local newspaper called “the biggest star-studded private celebration Las Vegas has ever seen [and] the party of the year“. 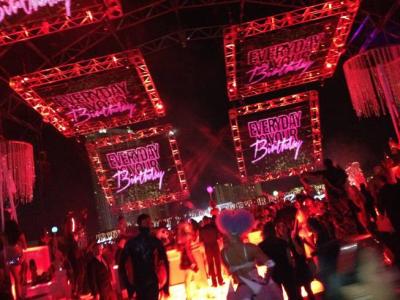 Picture sneaked out from the Jho Low party event

According to the Las Vegas Sun, Swizz Beatz, who is the spouse of the even more famous singer Alicia Keays, then performed at the most “jaw-dropping “Lifestyles of the Rich & Famous”parties around the world” its writer had ever seen. ” This one topped them all“, said writer Robin Leach:

With R&B and rap stars Swizz Beatz, Ludacris and Chris Brown debuting their single “Everyday Birthday,” it was a mega lineup of music superstars all under a giant open-air tent. The party included a Ferris wheel, a fairground carousel, a circus trampoline, a cigar lounge and a huge, after-midnight, 15-minute fireworks show..

The extraordinary celebration got underway at 10 p.m…. Unless you had the printed parking permit and your name was on the security list, there was no way for gatecrashers to get through the super-tight, airport-style security.

It was nonstop, unlimited drinks poured by an attractive army of 250 glamour girls dressed in revealing, short, tight red outfits. There also was a super squadron of Cirque du Soleil-type entertainers on stilts, masked curvy creatures, revelers in lit-up costumes and bizarre outfits, and lacy lingerie-wearing ladies swinging on hoops suspended over the two screened, offside walls where the dancers kept the electricity sparking. A troupe of mini-people even added to the fun.

The party playpen was divided into two sections, an amusement park area with fairground attractions and a nightclub-style dance floor area with luxurious leather couches to watch the sensational stage and firework shows.

The high energy had just begun to pick up as the strip-down-to-his-briefs antics of LMFAO’s Redfoo and the Party Rock Crew followed. He even left the stage and went dancing in the crowd; the inflatable life-sized zebra remained onstage! Swizz Beatz, Busta Rhymes and QTip followed with amazing performances before the massive fireworks display.

That was the cue for Britney’s arrival as she strolled through the crowd greeting the platinum party people and then going up onstage. As Britney sang, a laser light show lit up the sky as the four giant overhead video screens rolled up to give everybody the perfect view of the fireworks.

The celebrity list was endless. I have been to many jaw-dropping “Lifestyles of the Rich & Famous” parties around the world over the years, but this one topped them all.

Sarawak Report assumes that the payment to Swizz Beatz through Alsen was just a fraction of the money shelled out to each and every one of these top dollar performers, not forgetting the venue, Crystal, dancing dwarfs, army of red dressed wenches and all the rest.

One further payment dated November 2nd on the same statement for $5 million to the Las Vegas Sands Corporation would appear to be related, but is unlikely to have covered all the costs.

After all another paper, Page 6, reported that:

Sources tell us Britney Spears was paid an estimated $200,000 to $300,000 to perform three songs, but instead sang “Happy Birthday” and disappeared shortly afterward.

Goldman Sachs had excused the high fees on raising these bonds on the urgent speed with which the money was raised…. apparently it was needed in time to pay for Jho’s birthday bash.

Veteran Las Vegas nightclub reporter on the story Norm Clarke produced a list of those star beneficiaries from the ‘VIP event”:

One report had Di Caprio rapping onstage with Q-Tip and Busta Rhymes. LMFAO’S Redfoo and the Party Rock Crew also performed during the two-hour concert.

A source close to the event organizers described it as a launch party for the song “Everyday It’s Your Birthday,” a collaboration by hip hop producer Swizz Beatz, Ludacris and Chris Brown.

Who picked up the tab for the megabash was also something of a mystery.”

Sarawak Report can now answer the mystery for Norm, the Malaysian taxpayer picked up the tab for this party, thanks to a massive fraud perpetrated by their own Prime Minister. and we suggest that it is time for all those stars to dig into their bank accounts and pay back the money.

Swizz and Alicia continued in subsequent years to benefit from further high profile events and charitable donations, thanks to Jho’s raids on 1MDB.

Beatz appeared in the series of  ‘Jho Low funded’ pre-election concerts in Penang, together with other top performers like Psy, and his wife Alicia Keays charity event the Black Ball was supported by Jho Low just last year.

He also performed at another birthday extravaganza in Las Vegas, this time for the other major 1MDB thief, Khadem Al Qubaisi in the nightclub chain Hakkasan.

Khadem, as explained above, assisted in funnelling funds out of 1MDB through the bogus Aabar BVI company and then via the fake fiduciary funds, Enterprise Emerging Markets and Cistenique into the Jho Low controlled Blackstone Asia Real Estate Partners Limited.

From there, as Sarawak Report has previously reported, money not only went to Alsen, but also to Khadem’s Edmond de Rothschild Bank account in Luxembourg and indeed from there into the Tasameem group of companies, which owns the Hakkasan nightclub chain.

Series of tweets to Swizz and Alicia were not appreciated?

Over the past few months Sarawak Report has repeatedly warned the couple through Tweets and Facebook to be wary of their prolific benefactor.

SR has been ‘De-Tweeted’ by Swizz….

Swizz eventually responded by blocking us from ‘following’ the superstar rapper – perhaps someone else can warn him about this payment now being public? 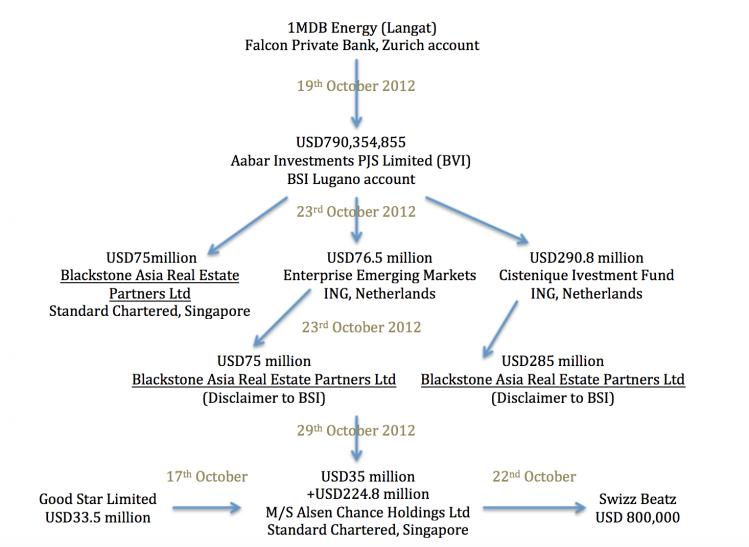