In The Open - UMNO Are Mobilising Red Shirt Thugs

Why the threats against a campaign for clean elections?

The mild mannered Bersih organiser Maria Chin has been quietly firm, in her headmistress-like fashion, that the right of people to have their concerns heard must be allowed in a civilised country.

The 5th Bersih march is no flash uprising. It has been planned for months in an orderly way and has been paid for by myriad small donations from the supporters of clean elections, good governance and action against corruption.

There have been four previous such marches, all remarkable not only for their large numbers but for their peaceful, good-natured and non-disruptive behaviour.

These well-behaved protestors seem even to have succeeded in educating the police, who had started by responding with panic to such vast numbers on the street – using thug tactics and water cannon against earlier marches – but by last year managed a largely exemplary exercise in stewardship.

Dr Mahathir has even started to attend these rallies, acknowledging the detrimental effects that came from his own hard tactics in years gone by. PAS, on the other hand, has stopped going. People should be allowed to show their views and reach their own conclusions in a country where they have a vote.

Yet, Najib, once again has ‘banned’ the event and for the past year the government has pursued numerous vindictive prosecutions to harass the organisers of the previous, peaceful and successful Bersih march.

They have also snatched Maria’s passport to prevent her accepting peace prizes in a neighbouring democracy, South Korea.

Meanwhile, a bunch of dancing, yelling thugs have dogged proceedings. The purpose of the extremely well-funded Red Shirts has been solely to disrupt Bersih. They are not interested in devising their own mass march they just want to break up this one and above all they want to turn a peaceful event into chaos.

If these extremely loud and thuggish folk, who spend their time shouting and tussling with the police, have an agenda it is to ‘defend’ Najib. They also promote “Malay Supremacy” and seek to identify and accuse people of not supporting their brand of Islam.

Anger, aggression and disruption is the name of their game and even its leading figures Ali Tinju and Jamal Yunos, have managed now to fall out between themselves, filing reports against each other.

Nobody in Malaysia has been under any illusion but that these trouble-makers are funded for their pains and that the funding comes from Najib. The ludicrous Yunos’s latest gambit has been to invite reporters into helicopters to look at the houses of people he wants to target…. helicopters cost a lot of money.

Time and again the bulk of attendees at the Red Shirts’ larger gatherings have admitted to being bussed in for money from poorer areas with little idea why.  This betrays the use of wider networks and today’s open call to members from the Melaka UMNO group to meet to discuss their ‘action’ in organising the Red Shirt counter-rally this weekend provides the proof.

Najib wants to save his face by achieving a large enough Red Shirt counter-rally so he can claim that the people of Malaysia prefer blind loyalty to his corrupt leadership over the principles and constitutional rights upheld by Bersih.

But, he has also set the stage for a far darker agenda, as all Malaysians now see.  This desperate and exposed political leader has refused to step down, despite his plain theft of billions from the public purse.

To protect himself he has driven numerous acts through Parliament to enhance his powers – the worst was last December’s National Security Act, which enables him to assume dictatorial powers, over-rule the King and specifically to kill people without an inquest.

Is he planning to create chaos this weekend specifically so he can make the excuse to enact this law, whilst blaming the peaceful marchers, which he believes can help him by-pass jail and stay in power for ever?

If that is your plan Mr Prime Minister, note that you have been rumbled in advance. 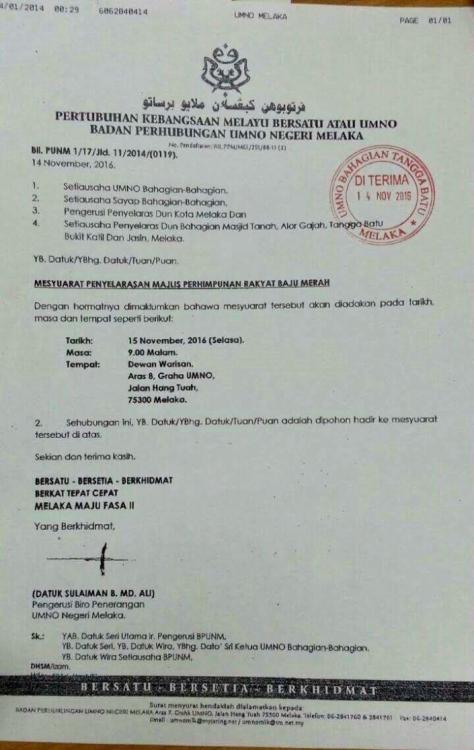 UMNO is now openly mobilising members to build up the Red Shirt’s attack squads on November 19th – why is Najib stirring trouble?