A criminal case is widely expected to be lodged shortly by United States prosecutors against individuals believed to have stolen money from 1MDB and laundered it illegally in the United States – and the main name in the frame is expected to be Najib’s proxy Jho Low, also a US citizen.

Other probable names include Jasmine Loo (also a US resident); Najib’s step-son Riza Aziz; Eric Tan (who laundered money for Low) and Shahrol Halmi, the CEO of 1MDB during the main part of the period of thefts. 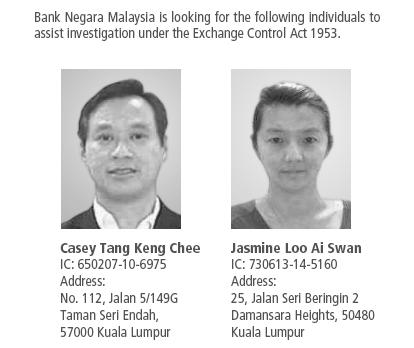 There is also speculation that the Goldman Sachs South East Asia boss Tim Leissner, whose bank received a little shy of $600 million for raising $6.5 billion of very suspicious loans may also find himself facing charges.

Sarawak Report can further reveal that more civil actions are due to retrieve more properties acquired with the money, which was stolen from the Malaysian public.

In July the Department of Justice announced after lodging a detailed civil action for the return of $1 billion in assets, that it was aware of at least $3.5 billion that had been stolen.

Malaysia’s Auditor General in his own report on 1MDB (which Prime Minister Najib Razak has unconstitutionally declared an ‘Official Secret’) assessed a total of $7 billion unaccounted for.

And over the past several weeks the full-scale investigation by US investigators into all aspects of the mega-theft has continued unabated.

Names in the frame

The name on everybody’s lips as the key person likely to be directly charged by the DOJ is the Malaysian financier Jho Low (pictured above with his party-pal and beneficiary of several gifts, Leo DiCaprio).  It was Low who represented Najib as his personal ‘advisor’ at 1MDB.

Sarawak Report first revealed evidence of Low’s secret role in managing the fund early last year, although for months Najib, 1MDB and Jho Low strenuously denied he had any role whatsoever at the fund.

In fact, Low was attending board meetings and supervising all 1MDB’s major ‘investments’ and joint ventures – raking off billions in the process, paying vast backhanders through his companies and then laundering the loot through a huge web of off-shore companies and bank accounts at BSI, Coutts, UBS, Falcon, Standard Chartered and other banks.

However, his patron, Najib Razak himself, is likely to escape charges at this point. Clearly, his position as the chief political figure in Malaysia has played a part in that decision. There is also the point that Najib has employed proxies for all these deals and for the laundering in the United States, in a case where the benchmark of proof will have been extraordinarily high.

Yes, Najib was Malaysian Official Number One, who held all the decision-making powers at 1MDB and into whose private KL bank account a huge billion dollar chunk of the money went. However, it was others who organised the transfers.

There are other US citizens who may well also find themselves in hot water for their role in handling suspicious sums, for example the wealth management advisor to Riza Aziz, Debra Johnson, who was removed from her job at the accountancy company NKFSB after the scandal broke in early 2014.  Riza Aziz’s co-producer at Red Granite, Joey McFarland, who assisted Jho Low in the purchase of major artworks may also find himself indicted.

There are also the string of managers and company co-conspirators connected to the Aabar/Falcon Bank side of the 1MDB corruption saga – these would include the Aabar senior officials Mohammed Al Husseiney and Khadem Al Qubaisi and also PetroSaudi managers like Tarek Obaid and Patrick Mahony, as well as legal helpers.

Questions may also have been put to US senior banker Ed Morse, who provided a supposed valuation of PetroSaudi based on information provided only by the company – although he did provide a full disclaimer, before putting in PetroSaudi’s figures as his own to 1MDB.

The list may be longer or still kept short. But, the truth is that the net of the 1MDB scandal has drawn in numerous names from world top bankers to lawyers and accountants all up to their necks in facilitating roles in the theft from 1MDB.

As for the masterminds in Malaysia – it looks as if the Malaysians themselves are going to be left with the job of dealing with them back home.