PetroSaudi's Tarek Obaid Is Under Investigation By The Swiss Authorities - 1MDB Officials Named! 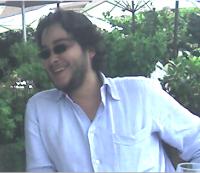 Sarawak Report has obtained documentary evidence which contradicts the longstanding denials by the oil firm PetroSaudi, who have claimed that neither the firm nor its shareholders and directors are under investigation over 1MDB.

A letter sent by the Swiss Federal Prosecutor’s Department to various banks, including BSI at the heart of 1MDB scandal, names the PetroSaudi shareholder and director Tarek Obaid as an individual whose finances are presently under investigation.

This includes his accounts at JP Morgan Suisse, which received payments totalling US$105 million from Jho Low’s companies Good Star Limited and Acme Time on October 30th 2009 for “Brokerage Fees” in the 1MDB joint venture deal.

The Prosecutors are seeking information about Obaid’s involvement in dealings between PetroSaudi and 1MDB in an investigation which is focused on four other key named individuals, namely 1MDB’s former officers Casey Tang (dubbed 1MDB Officer 1 by the Dept of Justice); Jasmine Loo (dubbed 1MDB Officir 3) and the two Aabar Executives, Khadem Al Qubaisi and Mohammed Al Husseiny. 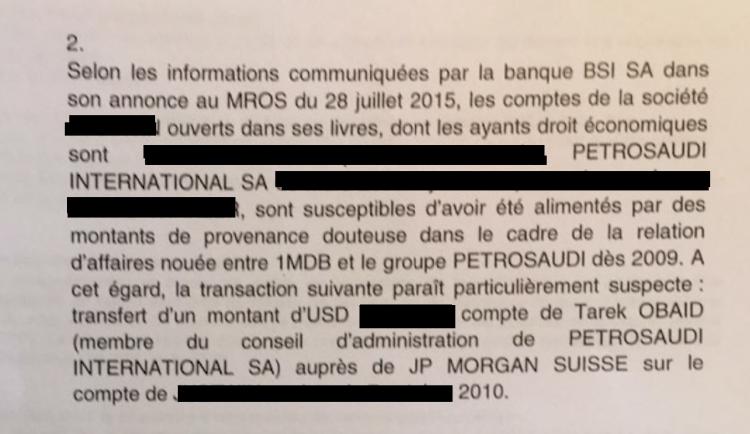 Translation:
“According to information given by BSI bank 25th July 2015, the open accounts of the company X of which the beneficial owners are X of XXXX at PetroSaudi International,  potentially received funds from doubtful sources in the context of the hidden affairs between 1MDB and the PetroSaudi group beginning in 2009. In this respect the following transaction is particularly suspect: the transfer of a sum of USDX from the account of Tarek Obaid (member of the Board of PetroSaudi International SA) from JP Morgan Suisse to the account of X in 2010.”

This document puts paid to the repeated claims by PetroSaudi lawyers and spokespeople that the company is not under suspicion of wrong-doing or being investigated. 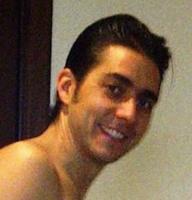 To the contrary, the prosecutor makes clear that money paid to a third party from Tarek Obaid’s JP Morgan account is regarded as being of ‘dubious origin’, having come from the transactions between PetroSaudi and 1MDB during the period subsequent to 2009.

Over and above this documentary evidence, Sarawak Report has obtained emails and messages sent by fellow director Patrick Mahony, which also make clear that he has been interviewed on a number of occasions by both Swiss Prosecutors and the FBI.

The development confirms damning evidence brought forward in the recent Department of Justice Indictment showing how PetroSaudi collaborated in a series of lies to Bank Negara, 1MDB Board, the PAC and others to deceive them into believing a loan had been paid by PetroSaudi to the joint venture and that the company Good Star Limited, to which it was ‘repaid’, was a subsidiary of PetroSaudi group.

In fact, the DOJ shows definitively that Good Star belonged to Jho Low and Tarek Obaid is identified as having directly colluded in the lies:

Obaid has claimed that his earnings from 1MDB were all above board and his fellow director Patrick Mahony says that the $33 million he himself received from Obaid via the same JP Morgan accounts had nothing to do with 1MDB.

Meanwhile, Xavier Justo, the whistleblower they denounced and bundled into jail for over a year in Thailand has been granted a Royal Pardon, resulting in a major reduction of his sentence and possible parole. 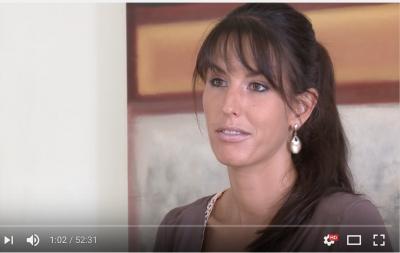 His wife has called for him to be returned to Switzerland without delay, now that the irregularities in his case have been exposed, including the fact that it was a British national paid by PetroSaudi who took his forced confession without a lawyer present.

Justo’s lawyers have further confirmed that the Swiss authorities have now formally requested the Thais to enact international prisoner transfer agreements, which ought to see Justo returned soon.

Laura Justo is likely to press a series of criminal complaints against PetroSaudi shortly for their part in orchestrating her husband’s arrest, conviction and continuing imprisonment.

The other major development from the Swiss prosecutorial letter is that it names two 1MDB Officials who were not directly identified by the DOJ indictment last month, which is believed to be merely a first step in a massive kleptocracy prosecution.

It opens up the prospect that the identities of other officials, who have hidden behind thinly disguised terms, will also soon be confirmed through official sources such as this. 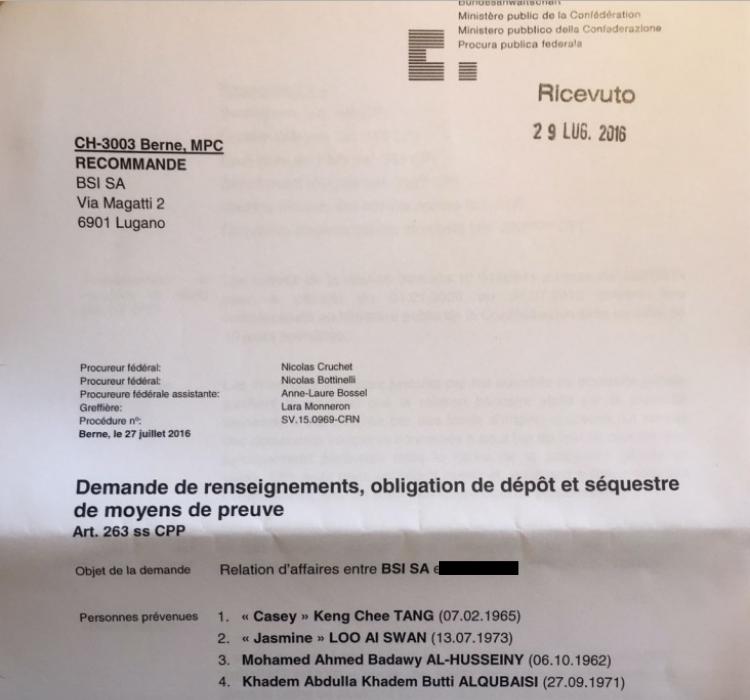 It means that Jasmine Loo, whom Sarawak Report has identified participating in recent skiing trips to the Alps with members of Jho Low’s Hollywood circle, is now feeling the heat over the origin of all her cash following a short career at 1MDB preceded by UBG Bank.

Loo has an expensive flat in New York and has been a high profile contributor at US charity events sponsored by Low.  Casey Tang, on the other hand, escaped into hiding within days of Sarawak Report’s original exposure of the PetroSaudi heist in February last year.

The letter from the Swiss Prosecutor continues:

“The sovereign fund 1 Malaysia Development Berhad (1MDB) was despoiled of several billion US dollars in the context of several international financial operations. 1MDB notably secreted these within contracts with the oil company PetroSaudi and the Abu Dhabi International Petroleum Investment Company IPIC, through its subsidiary Aabar.

In this context the enquiry has revealed a suspicion of corruption with regard to former representatives of 1MDB (Casey Tang, Jasmine Loo) and from IPIC (Khadem Al Qubaisi, Mohamed Al Husseiny).

The criminal proceedings opened against these four people have raised suspicion with regard to each of their many banking relationships in Switzerland, in that these accounts may have received funds of criminal origin.” 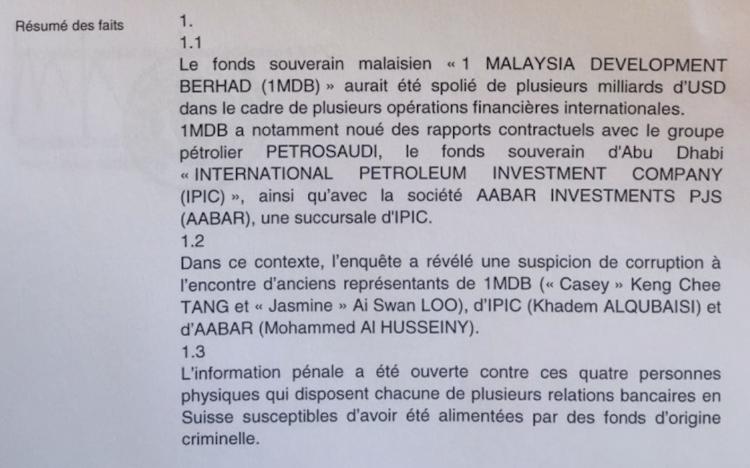 Wanted – Casey and Loo, as published by the Malaysian authorities last year

The charges involved are plainly spelt out by the prosecutors and they are extremely serious for PetroSaudi, who are clearly named as complicit partners.

Tang and Loo are accused of dishonest management, money laundering, abusing public trust and the corruption of foreign officials.

Xavier Justo has spent over a year in jail for spilling the beans on these people.  He was jailed on the basis of a confession obtained from him from behind bars after PetroSaudi Director Patrick Mahony told him that his choice was to expect a 9 year sentence for attempted extortion over company secrets.

The wheels of justice may slowly be turning.

FURTHER NOTES – How the DOJ filing shows collusion and duplicity by PetroSaudi, a company which has protested it was an innocent partner in the 1MDB heist for months:

The DOJ filing provides a detailed summary of exactly how $1.03 billion was deliberately siphoned out of 1MDB into the Jho Low owned company Good Star Limited, using the pretence that Good Star was a subsidiary of PetroSaudi.

The DOJ pinpoints deliberate lies by two 1MDB officers, Casey Tang (Officer 1) and Shahrol Halmi (Officer 2), where they said the Good Star bank account belonged to PetroSaudi and that Good Star was a PetroSaudi subsidiary.

“On September 30, 2009, at approximately 2:39 p.m., the Deutsche Bank Employee, a Deutsche Bank supervisor (“Deutsche Bank Supervisor”), and 1MDB OFFICER 1 [Casey Tang] had a telephone conversation regarding the requested $700 million wire transfer. During this conversation, 1MDB OFFICER 1 falsely represented that the beneficiary of the $700 million wire was PetroSaudi. In truth, the beneficiary of the wire was Good Star. ” [paragraph 67]

“At approximately 7:51 p.m [Oct 2nd 09]., 1MDB OFFICER 2 [Shahrol Halmi] emailed the Deutsche Bank Employee and 1MDB OFFICER 1 with authorization to disclose to RBS Coutts that the beneficiary of the $700 million wire was Good Star. However, 1MDB OFFICER 2 misrepresented the nature of the relationship between Good Star and PetroSaudi. Specifically, 1MDB OFFICER 2 stated: “This payment was for beneficiary ‘Good Star Limited’ in their SWIFT. Good Star is owned 100% by PetroSaudi International Limited.” In reality, however, Good Star’s sole shareholder and the signatory on its account was LOW – not PetroSaudi. [Par 76]

None of these deceits could have been carried out without the cooperation and complicity of PetroSaudi’s senior staff, who also lied to create the same impression.

In particular, documents drawn up by PetroSaudi’s legal team from the London branch of White & Case (who were involved in every step of the deal including the creation of the relevant PetroSaudi subsidiaries and formation of their bank accounts) incorrectly claimed that the bank account at Coutts Bank, which belonged to Jho Low’s Good Star Limited, was a PetroSaudi account:

Blatant lie – PetroSaudi did not have a Coutts account – signed by Tarek Obaid, director and shareholder

The above letter was a blatant lie by the Director of PetroSaudi, which never paid or received repayment of the $700 million fictitious loan supposedly owed by the Joint Venture company.

Likewise White & Case gave details to 1MDB in the completion documents it drew up for the Joint Venture of the same Good Star bank account, which it again claimed belonged to PetroSaudi when it plainly did not: 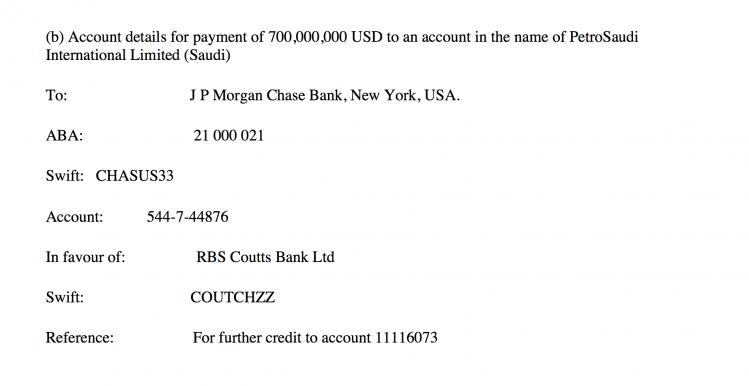 This account was not in the name of PetroSaudi

Sarawak Report asks how a legal firm, which had meticulously drawn and re-drawn every detail of this billion dollar venture, failed to check the evidence as to the ownership of the crucial account that received the bulk of the money.

Also, how could shareholder/director Tarek Obaid have claimed that his company had been ‘repaid’ a $700 million sum and not notice that it did not arrive? Instead, a payment of $85 million arrived in Obaid’s personal JP Morgan account a couple of days later, relating to a “brokerage fee” paid by Good Star Limited itself!

Nevertheless, years later when the whole matter came under investigation in 2015 Tarek agreed to write a letter to 1MDB to confirm that PetroSaudi owned Good Star – a letter that was presented to the Malaysian Public Accounts Committee and Auditor General’s investigation as evidence in the place of any actual documentation and which both bodies dismissed.

That letter (again signed by the lying Obaid) has now come to light after being released to BN friendly blogs in Malaysia: 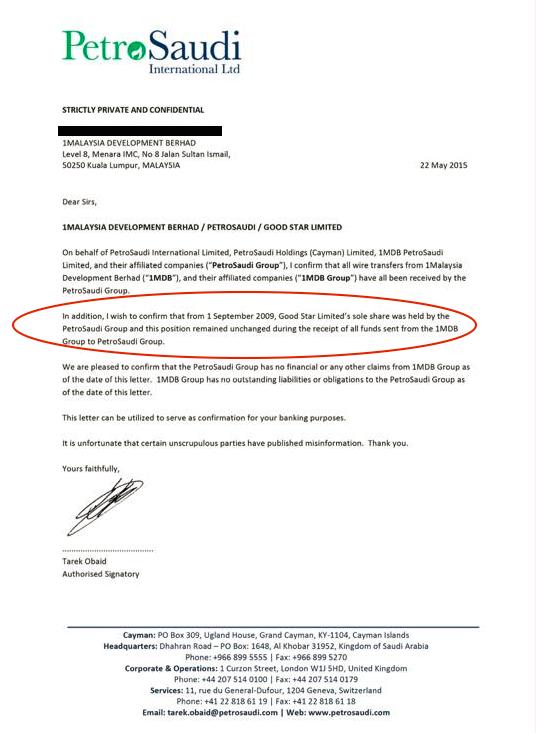 So little surprise that Obaid and all his banking transactions is being investigated by the Swiss authorities.  All parties in the PetroSaudi deal must  likewise be under scrutiny by numerous jurisdictions, however much they and their fleets of highly paid lawyers have angrily sworn they were not.

We will be sending this evidence (again) to the prominent UK businessman Rick Haythonthwaite, who has acted in senior positions at PetroSaudi during and since the time of the deal, but who for over a year has apparently refused to investigate the concerns, choosing instead to accuse Sarawak Report of “questionable activities” after we alerted him to the evidence.

As Chairman of MasterCard Global and of Centrica Gas, Haythornthwaite’s lack of interest in checking the concerns over PetroSaudi’s involvement in 1MDB, can only itself be described as “questionable”.