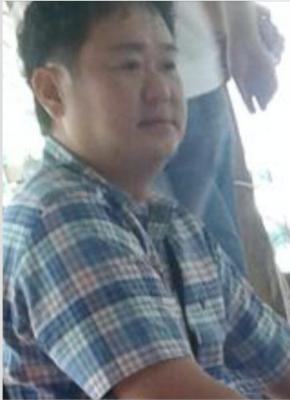 So politically well-connected is Dato’ Lee Chee Kiang that it seems that no one has so far dared to name him in Malaysia.

However, we can reveal that he is squarely cited in the charge sheets against others arrested over the fatal shooting of the land rights hero Bill Kayong, where he is named for having abetted the murder.

Lee is believed to have fled Sarawak for Australia at about the time Kayong was shot dead in his car at a traffic light in Miri, yet there has been no public notification so far that a  Red Notice Alert has been issued for his arrest and we ask if the Australian police are aware that a wanted Malaysian suspected killer is at large and believed to be in their territory?

After all, the charge sheet against Lie Chang Loon who appeared in court last week together with the man accused of shooting Kayong plainly reads: 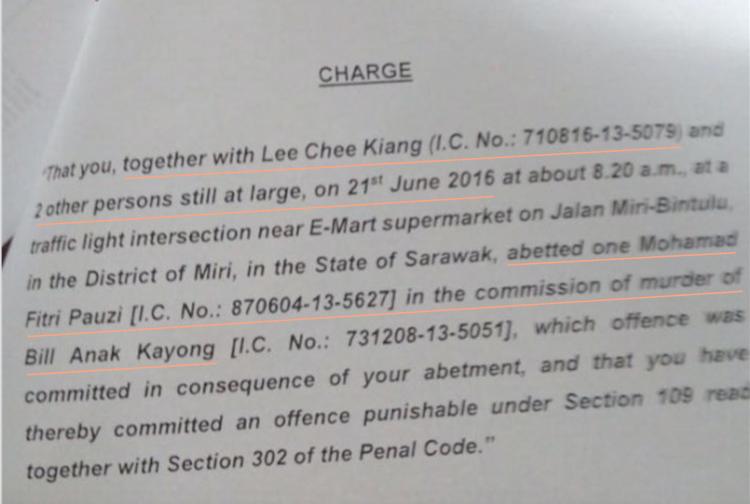 The murder of one of Sarawak’s best known land rights figures was immediately widely suspected as being linked to the gangster timber politics of the state. 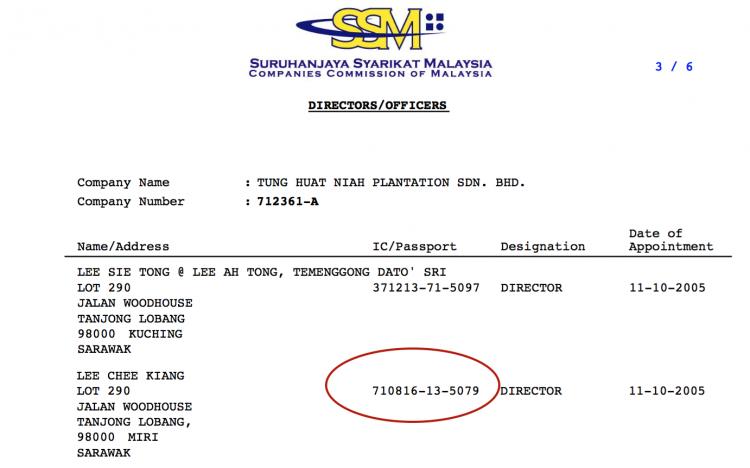 Indeed, the criminal nexus between land grabbing timber/plantation companies and top politicians, who hold undue influence over the forces of the law, has been perfectly illustrated in the case of Tung Huat Plantation, where Lee Chee Kiang is a Director and key shareholder.

For years native landowners have been locked in legal battles against the company, supported by land rights lawyer Abun Sui and campaigner Bill Kayong, who are both linked to the opposition PKR party – Kayong was a candidate at the state election. 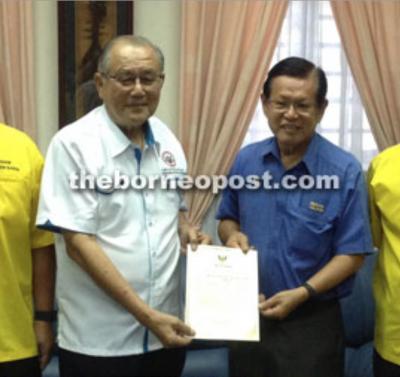 Lee Chee Kiang, on the other hand, is very closely linked to BN’s SUPP party, whose local election battles have been heavily financed by Najib personally (as million ringgit cheques signed by him at the general election bear testimony).

Lee’s father and fellow director, Lee Sie Tong, is none other than the present Temenggong of Miri, known to have close ties to the SUPP.

On June 1st that post was extended in a ceremony officiated by an SUPP Vice President, the Tourism Minister Lee Kim Shin, who openly congratulated Temenggong Lee for having “been instrumental in getting the community to support the Barisan Nasional (BN) government“.

Together with his son, the Temenggong is not only a Director of Tung Huat Plantation they are the major shareholders also. 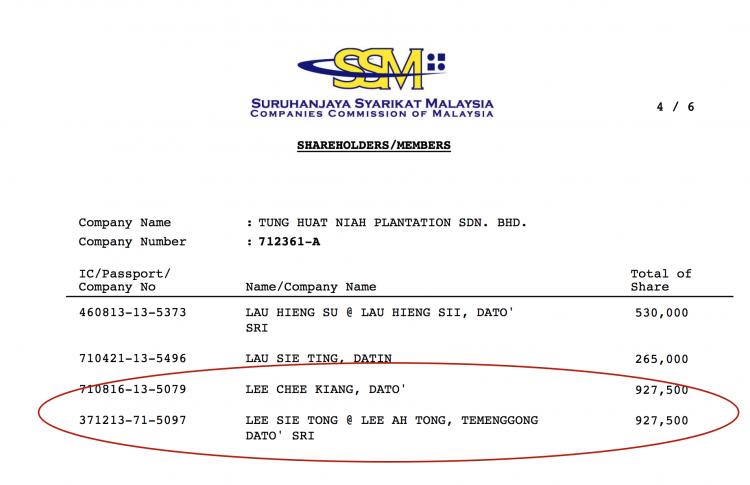 Father and son – Major shareholders and directors of Tung Huat plantation, as well as movers and shakers in Miri politics

Despite this prominent communal role the struggle involving Tung Huat has been one of the worst examples of violence and bullying towards local communities in recent years in Sarawak.  Radio Free Sarawak has reported on the issue since 2011 and civil rights campaigners have raised ongoing major concerns throughout this period. 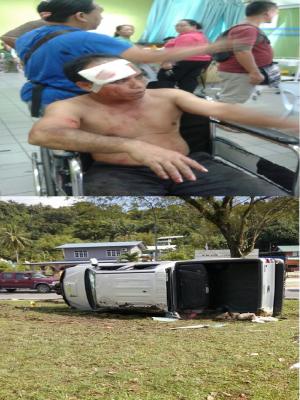 Bill Kayong himself and other campaigners had received unrelenting verbal threats from Lee himself and gangsters allegedly paid by him for months, often receiving up to 20 phone calls a day, according to people close to the case.

Meanwhile, a series of appalling violent attacks had been launched against the local Iban community affected by the Tung Huat Niah Plantation in Sungai Bekelit.

In one incident late last year the headman was run off the road by gangsters, who were in a vehicle registered to the plantation company and slashed with a parang.

In a string of other incidents cars have been burnt out, houses firebombed and gangsters have been reported numerous times arriving at the village to intimidate locals who had mounted blockades.  In some cases they were reported for deliberately running people over in their vehicles, landing them in hospital.

Yet, despite the unrelenting violence against villagers, local leaders and campaigners have complained that the police did precisely nothing to protect their safety. 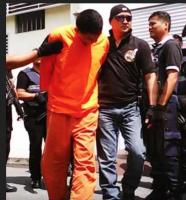 To the contrary the villagers’ legal representatives found that instead the company had started mounting cases against them, denouncing them in the courts for incitement.

After months and years, during which local people were forced to stand their ground without the support of the forces of law and order, campaigners believe that the owners of Tung Huat Plantations came to the conclusion that they could act with impunity.

And in the case of the fugitive Dato’ Lee Chee Kiang it appears from the present charges that he decided that he could threaten the main political campaigner against his plantation and then order that those threats be carried out. 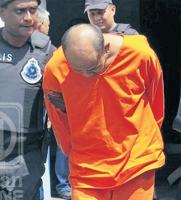 Accomplice – Lie hired Fitri according to the charges

Sarawak Report has been told by those with knowledge of the case that Lee Chee Kiang had started asking around for local mercenaries in the absence of any police action against the earlier outrages, which had plainly been carried out by those associated with his company.

It is alleged that Lee approached Lie Chang Loon (one of the two in custody), who in turn sub-contracted the shooting to Mohamad Fitri Pauzi (also now apprehended and charged).

Yet, when the two men were brought to court yesterday and remanded on these charges there was no mention by the jubilant police force of the names of the other suspects they are hunting.  Nor did the local papers name the key suspect for commissioning the crime, although they too have had access to the charge sheet information.

All the Borneo Post dared hint was that “A Dato’ ‘Mastermind’ is on the run“!

was the only coy reference to the identity of the “mystery Dato’ from Borneo Post. 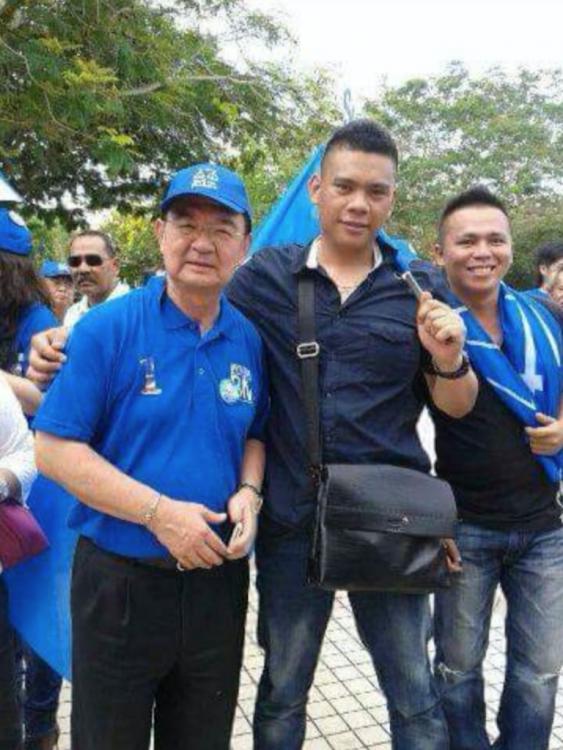 The shocking extent to which the SUPP/BN political connections of this suspected gangster, Lee Chee Kiang, continues to protect him in Sarawak could not be clearer than the failure to even name him as the prime suspect in this murder.

Meanwhile, Sarawak Report has obtained the above picture of the very man accused of pulling the trigger, earlier standing side by side with the former SUPP boss Peter Chin on the BN campaign trail.  The tall and muscular hit man, Mohamad Fitri Pauzi, has his arm draped over the shoulder of his political leader in a gesture of close affection. 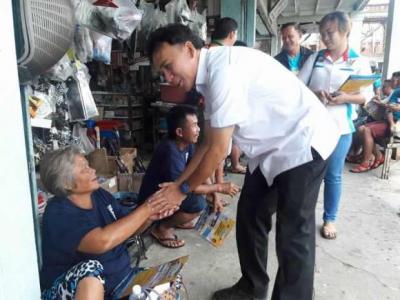 Had the young man seen his contract to eliminate a charismatic opposition figure, who was getting in the way of the financial interests of SUPP-connected figures, as somehow part of a political mission in Sarawak?

It is time that the rulers of the state end their deafening silence over the shocking circumstances of this case and denounce the politically connected company, which benefited from the failure of the police to stand up to their criminal behaviour.

It is also time that Peter Chin spoke out to clarify SUPP’s position with relation to the Tung Huat Plantation company – in particular does he or any other SUPP politician hold shares or interests (or nominee shares or interests) in this company and, if not, why does he believe the police have for years failed to address its gangster activities against the locals whom SUPP are supposed to represent?

Finally, it is high time that the violent intimidation of the natives of Sarawak by greedy companies, who have raped their lands with the full support and backing of the political establishment, was ended.

Chief Minister Adenan Satem has claimed he wants more autonomy, but what hope is there for natives that their interests will be any better protected by a stronger state government, which has allowed such a state of affairs to develop? 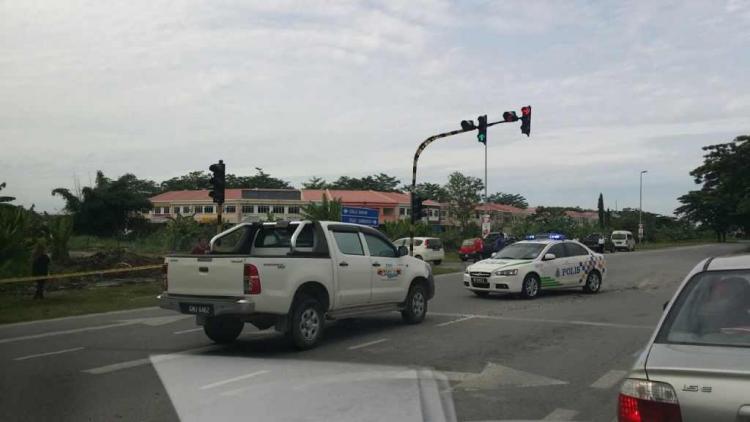