An extraordinary year of forgery and deception on the part of 1MDB and its boss Najib Razak has continued to unravel this weekend, following the publication of Abu Dhabi’s IPIC fund’s Annual Report; the revelation of key letters from the fund and now further exclusive material acquired by Sarawak Report.

Sarawak Report has obtained documents supplied to the Auditor General’s investigation, which show the 1MDB Board was still signing off vast payments to the bogus BVI company Aabar Investments PJS Limited (BVI) for alleged ‘loan guarantees’ as late as November of last year.

This was in spite of a letter revealed by the Wall Street Journal on Friday, showing that the IPIC/Aabar Managing Director had personally complained directly to Najib as Minister of Finance the previous July 2015 that he was not aware of any such payments or agreements requiring 1MDB to pay any money at all for guarantees or options to his fund. 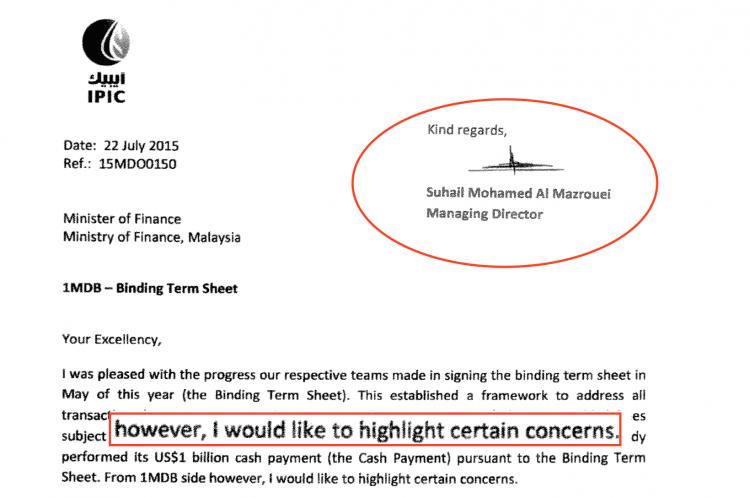 Najib had received this ‘red letter’ as early as July 2015, warning that guarantee payments were neither being requested nor received by the genuine IPIC /Aabar…..

These further payments total a staggering US$1.15 billion and were made under the guise of buying out yet more ‘options’ and ‘minority interests’ from Aabar in 1MDB’s power companies and extending the loan guarantees, in preparation for the planned public offering (‘IPO Variation’) which never happened.

According to a November 26th 2015 circular resolution signed by the 1MDB Board, the payments were also supposed to secure an alleged secret extension of IPIC’s loan guarantees to cover 1MDB’s third major bond issue of US$3 billion raised through Goldman Sachs in March 2013.

These payments later emerged as part of the debt burden placed on the head of IPIC itself when 1MDB crashed in June 2015. 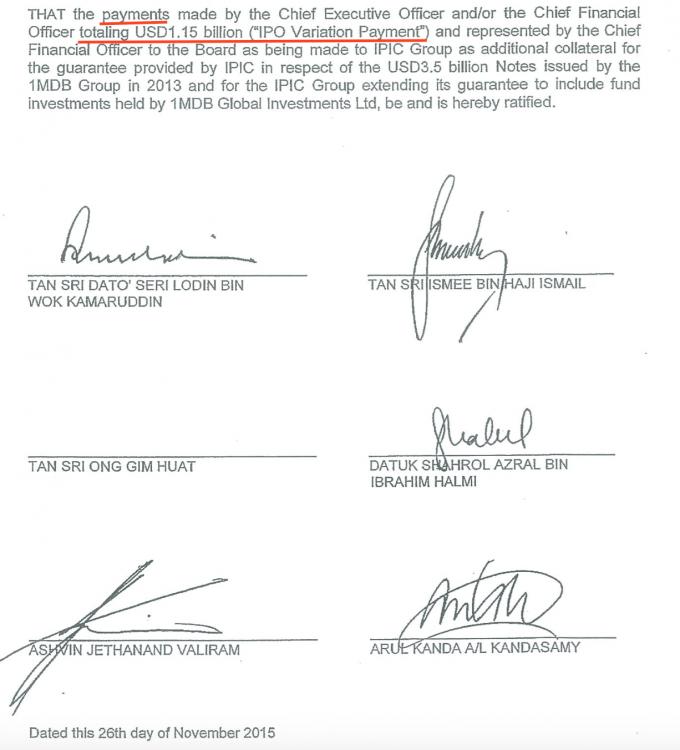 The third 2013 bond had originally been linked to a ‘strategic joint venture’ with Aabar to develop the Tun Razak Exchange – a project which also never materialised. Unlike the 2012 ‘power purchase’ loans, which were guaranteed from the start, the 2013 offering had made no reference to a guarantee from IPIC.

That retrospective resolution by the Board of Directors on 26th November 2015,  sanctioning the $1.15 billion in total payments, which had already been paid out, explains that these decisions to extend the guarantees and buy out options were all “confidential” and therefore omitted from the public accounts.  We ask why?

Bogus payments for bogus guarantees were made to bogus companies

The reason for the secrecy seems clear.  The Minister of Finance and boss of 1MDB had already been told in July that such payments were unnecessary and had previously not even correctly arrived at IPIC.  Clearly therefore, there could be no justification for extending the payments by another US$1.15 billion. To the contrary, the previous payments ought to have already been under urgent review!

Indeed, Sarawak Report has learnt that the Auditor General was so incensed by the late production of this ‘confidential’ documentation, labelled “Top-Up Collateral” by 1MDB and also by its unbelievable nature, that he refused to include it in his official enquiry and report.

After all, the IPIC letter of 22nd July 2015 had formally protested that there had never been any payments or deposits made to their company, either to secure the guarantees for the 2012 power purchase bonds or to release ‘options’ as 1MDB was continuing to allege in press statements and in their 2014 accounts signed off by Deloittes:

“I noticed inconsistencies in the 2014 financial statements of 1MDB… In particular, references to a “refundable deposit” and an “Aabar deposit” are recorded in some accounts as being held aside as collateral for those 1MDB borrowings which are supported by IPIC’s 2012 guarantees…..  I am not aware of any such deposit being held by Aabar and no documents relating to the underlying transactions for such a deposit as far as I am aware.  I can only assume that the reference to … Aabar is misconstrued or a plain mistake” wrote the IPIC Managing Director, Suhail Mohamed Al Mazrouei 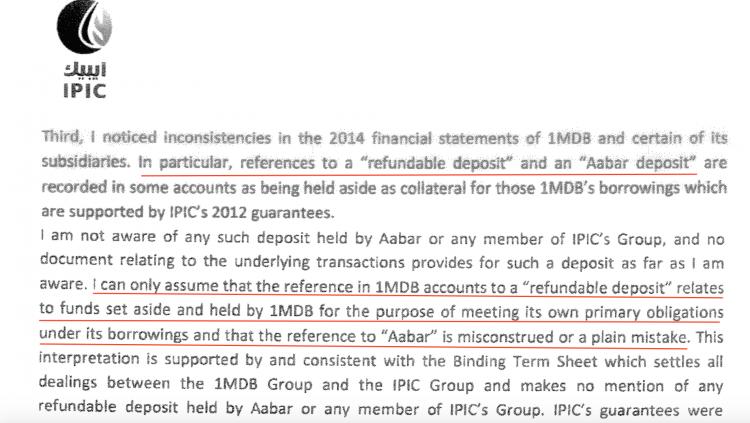 “plain mistake” or lies? After all we are talking about over US$3 billion gone missing…

Again, in a second letter in October 2015, this time from Aabar’s new CEO, Mohamed Hamad Al Mehairi, the Abu Dhabi fund made the very same point that no such cash or deposits had been requested or received their end:

This position by IPIC was sustained in its 2015 Annual Report, released to the London Stock Exchange last Friday, July 1st, which pointed out that the deadline for 1MDB to meet its actual obligations to IPIC under the so-called Binding Term Sheet of last year had expired on June 30th, the day before.

Yet again IPIC denied that there had been any arrangements to pay ‘refundable deposits’to Aabar in return for its guarantees or any money paid for options – and it reiterated its public statement first made 11th April that the ‘bogus’ Aabar Investments PJS Limited BVI is not part of the Aabar group.

In consequence IPIC announced in the report that it is suing the Malaysian Ministry of Finance for US$6.5 billion in missing money.

IPIC states its position as it faces the arbitration against 1MDB

The IPIC report also states plainly that claims by 1MDB’s auditors Deloittes that its subsidiary Aabar had guaranteed its Cayman Island funds, managed by Bridge Partners/ Avestra and held in BSI Bank Singapore, were nonsense (as plainly suspected by PAC members who had questioned Deloittes managers with growing astonishment about the ‘confidential’ arrangement for their own report).

It was on the basis of that contested guarantee that Deloittes had controversially signed off 1MDB’s 2013 accounts, which their predecessors KPMG had refused to do.

The IPIC report uncompromisingly announces that it had never guaranteed these Cayman investments, supposed to be held by Brazen Sky in BSI Bank Singapore and neither had it engaged in any further “Top-Up Collateral” for 1MDB nor received the US$1.15 billion 1MDB alleged they paid.

“..1MDB has intimated the existence of guarantees of approximately US $ 940 million provided by Aabar in respect of fund units in a Cayman registered fund, owned by 1MDB subsidiary Brazen Sky and further guarantees from Aabar BVI of fund investments held with various third party fund managers in the amount of approximately US $ 1.5 billion. Both IPIC and Aabar confirm there is no record of any such guarantees being provided by Aabar and as such no disclosure of financial guarantees needs to be made in these consolidated financial statements and further confirm that neither IPIC nor Aabar has received any payments, assets or fund units from Brazen Sky.” [IPIC 2015 Annual Report]

Documents to justify matters after the event?

Therefore, the documents acquired by Sarawak Report, after being handed to the Attorney General, appear to have been retrospectively created as a mere disguise for several payments, which had already been removed from 1MDB, all drawn up in retrospect, involving a company that Najib had been personally warned was bogus by IPIC itself.

The Circular Resolution itself, signed off by Directors on November 26th 2015, approves a series of payments which were made by 1MDB Energy Holdings and Brazen Sky Limited from May 2014 totalling the US$1.15 billion 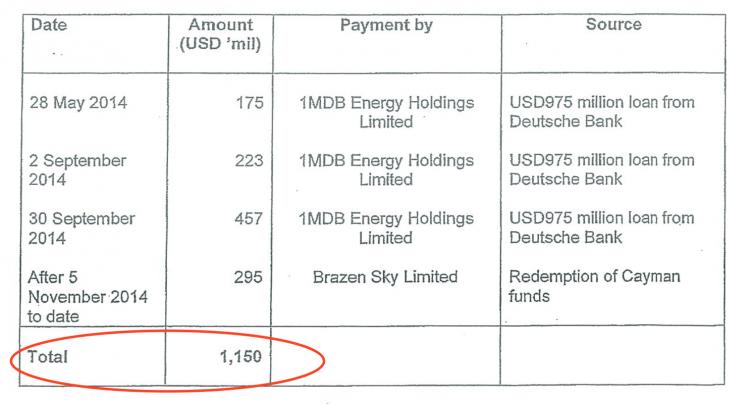 Approved after the event

This document recorded that Directors had agreed in principle in May 2014 to ‘acquire options and key assets’ from Aabar and later in August borrowed USD975 from Deutsche Bank in August to facilitate a public offering of its energy assets, which had been bought with borrowings just two years earlier.

It went on to explain that 1MDB management had then gone on to ‘negotiate’ the US$1.15 billion payment, described as an “IPO (Initial Public Offering) Payment” with IPIC, in order to cover the costs of those extended guarantees and acquisitions. These commitments were also kept a secret the document explained: 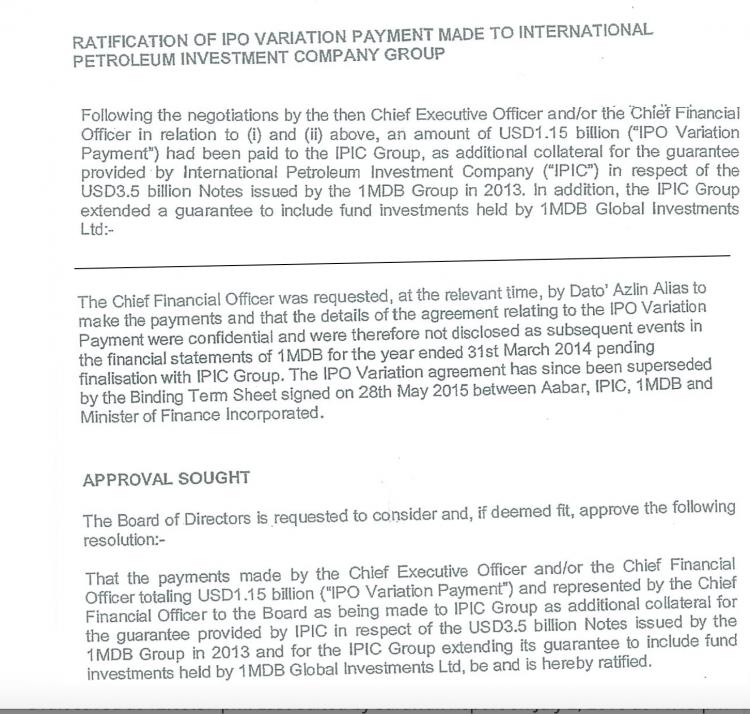 Explanation… or excuses after the event?

There is a third document accompanying this clutch of papers, which is possibly the most damning of the lot.  This is entitled “Agreement For Provision Of Guarantees” and astoundingly is dated as late as 6th October 2014 – after the vast bulk of the billions that were owed allegedly to IPIC/Aabar had already been paid out to the bogus BVI company.

In short, this is the document that gave belated retrospective permission for the payment of the initial US$1.4 billion, which was deposited back in 2012, supposedly to cover the original power purchase loan guarantees.

Together with a further US$993 million also supposedly paid to buy out options, the October 6th 2014 Agreement is therefore the document that finally sanctioned all that money (US$3.5 billion) which had already been shelled out to the bogus Aabar months and years before!

The explanation for the payments, complex language set aside, was essentially that in the light of the apparently risky IPO now planned for the power plants 1MDB would retrospectively need to pay Aabar a premium for its 2012 guarantees, amounting to USD1,439,343,490 (money already been paid out).

Further to that was the “Top-Up Collateral” for all the other dealings referred to above, amounting to USD1,15 billion.

This 6th October 2014 agreement was signed by the Aabar CEO Mohamed Al Husseiny (now sacked and under investigation in Abu Dhabi) and an as yet unidentified officer of 1MDB Global Investments Limited.  Crucially, Al Husseiny signed the document in his capacity not as Chief Executive of Aabar Investments PJS, the genuine subsidiary of IPIC, but as Chief Executive of Aabar Investment Limited PJS (BVI).

By the time the Board was asked to ratify it and the related payments in November 2015, over a year later, the Minister of Finance had already been notified that the company was bogus by IPIC. 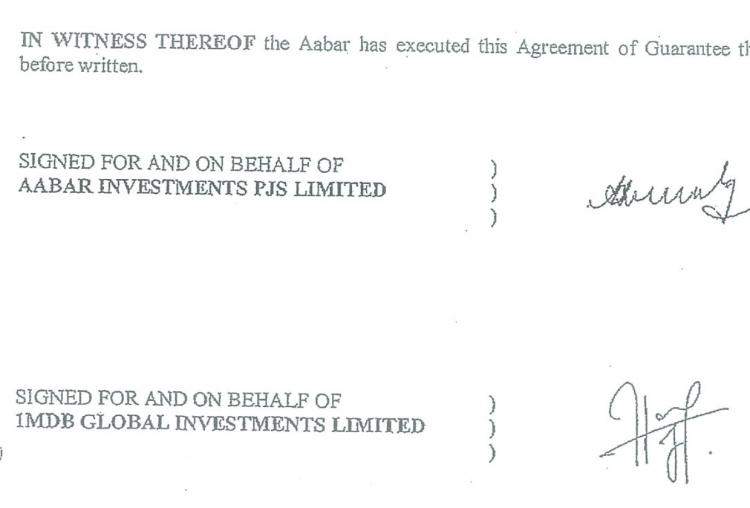 The complicity of Aabar’s top management is now established

And how could this belated authorisation, months and years after most of the money had already been waved goodbye to, be possibly construed as legitimising the series of deals that have lost 1MDB US$3.5 billion?

Najib and his 1MDB colleagues, including the CEO Arul Kanda, who was a signatory to the “Top-Up Collateral” nonsense, have one key point to fall back on when IPIC finally takes them to court of arbitration over this astonishing heist, which is that IPIC’s own two top officials were plainly complicit in this deliberate theft from Malaysia.

Incorporation documents (procured by WSJ) show that the bogus Aabar was set up in BVI by the genuine company’s CEO Al Husseiny and his boss the Chairman Khadem Al Qubaisi. They registered the shareholder as being none other than the correct Aabar PJS itself, which is the point contested by IPIC. 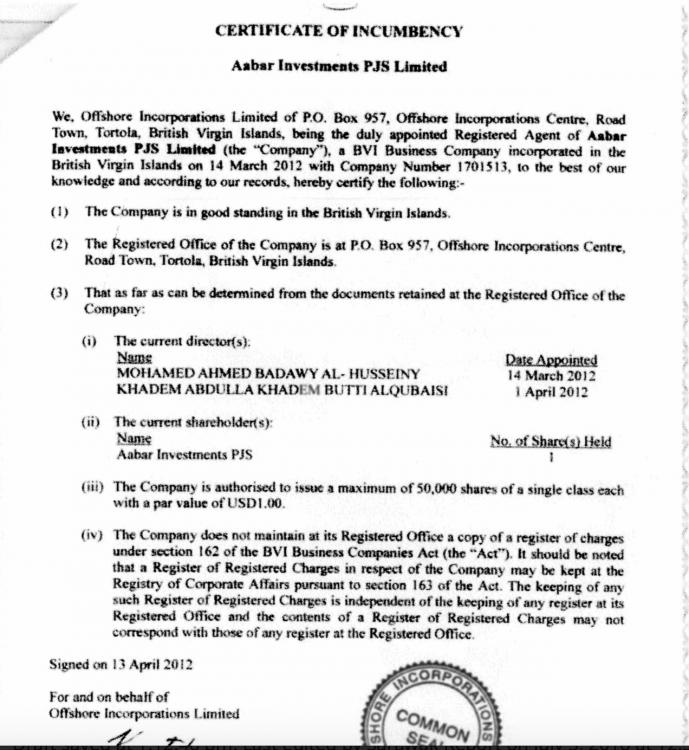 Both men are now under house arrest in Abu Dhabi charged with participation in the fraud and for orchestrating separate devastating losses to IPIC.  That complicity gives Najib and his boys the excuse of saying that they were ultimately misled….. except they had already been tipped off months before they paid that last BILLION dollars in the course of 2014!

Sarawak Report suggests that the arbitrators in this affair can therefore reach only one conclusion on the evidence of the case, which was that Najib Razak, together with the two managers of Aabar, conspired to use the IPIC guarantees as a vehicle to siphon money out of 1MDB and into a bogus company  (Aabar Investments PJS Limited), which was set up for the purpose in the British Virgin Islands in April 2012 just a couple of weeks before the first IPIC guaranteed ‘power purchase’ bond was raised by Goldman Sachs on May 18th of that year.

So the excuse of having been ‘misled’ by a bogus Aabar subsidiary is unlikely to take 1MDB’s managers very far.

See more of the retrospective agreement sanctioning the US$1.15 billion below: 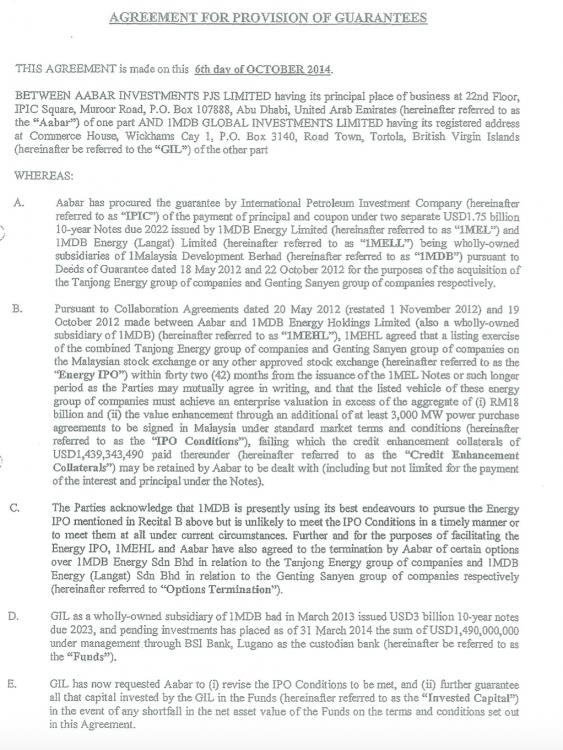 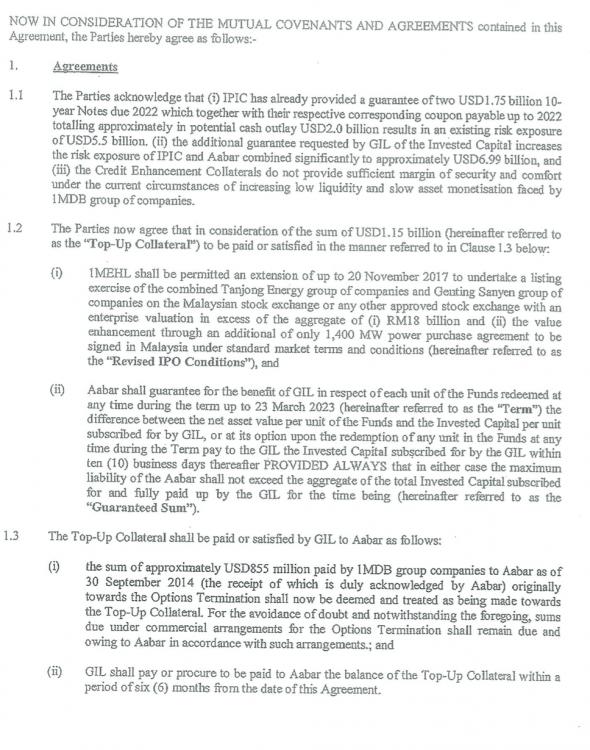