For yet another week the unabashed leaders of BN plainly intend to sully Sarawak’s morals with disgusting displays of naked bribery,  threats and open election cheating.

The lights will go out three days before (as usual) so that the BN controlled charade can then get down to the real business of making sure they come out with a really whopping “win” after the pantomime of all that so-called ‘electioneering’.

No effective monitoring at the count will, of course, be tolerated – those of PR’s leaders who have been allowed in at all are due to be rounded up and thrown out of the state on May 5th. No explanation given.

A hundred thousand illegal postal votes from absent West Malaysian ex-cops and soldiers remain in hand to be distributed around to ‘top up’ any flagging BN seats – and, of course, there are now the 11 safe new micro-rural seats, designed to ensure a commanding 2/3 majority. Despite protests at the constitutionally illegal and gross imbalance of voter numbers, the client Election Commission forced the gerrymandering through.

These kleptocrats will then massively congratulate themselves and attempt to claim they ‘won hearts and minds’, before they doubtless all run off to Mecca (first class/private jet) to ‘purge themselves’ of such blatant sin. 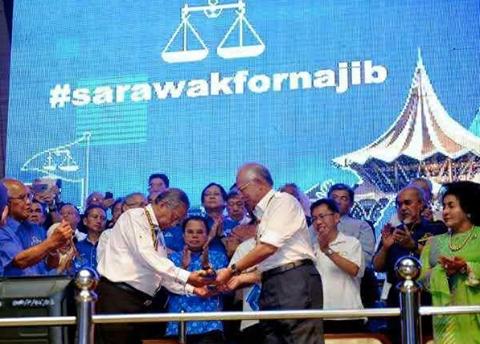 This election is nothing to do with Najib? Adenan bows to his UMNO boss

In the eyes of the world it won’t wash, of course. Elections are about winning the argument, not bludgeoning the poor.

As any observer can deduce, the reason BN behaves this way is because they themselves know and fear that they cannot win on anything resembling a fair playing field. It is a plain admission by themselves that they know they have lost hearts and minds, so need to resort to the worst levels of election thuggery.

Indeed, given BN’s actions over this short ‘campaign’, they might as well have driven tanks into Kuching and declared martial law, as why bother to pretend that this has been any kind of a democratic vote.

What worries many is that Kuching is a mere precursor to just such a potential outcome in Malaysia.

Najib is fighting hard to force the sultans to agree to concede him new ’emergency powers’, already granted by his parliamentary toadies, given that the probability now looms that his role in the theft and laundering of billions of stolen public money will soon be proven by global investigators.

Part of this planned “clamp down” will be an assault on the freedoms of the online media, so that his and his party’s behaviour during elections such as in Sarawak can no longer be brought to the attention of the outside world.

The ‘reformer’ who learnt his lesson

Back when he took over in 2009, of course, Najib had reckoned he could have his cake and eat it, by promising ‘reforms’ of Malaysia’s repressive systems, which are designed to keep the BN kleptocrats for ever in power, getting richer and richer.

Adenan played the same ‘reformer’ role when he later took over in Sarawak.  Both scooped plaudits.

Sadly, it is like expecting a bunch of dirty old Mafia bosses to clean up their own illegal business.

Like Adenan, Najib has been at the heart of BN’s corrupted process all his political life.  While they may like to pretend they are forward looking, the logical conclusion of reform was a change of government and an end to the kleptocrat bonanza for UMNO’s ruling clique of client families in Malaysia – most particularly the both of them.

The 2011 state election in Sarawak was the first wake up call. A more open election than had ever previously been allowed, thanks to a free online media, and the emergence of a real opposition leader in the form of Anwar, caused a landslide away from BN.

If BN had not controlled a swathe of rotten rural seats the former Chief Minister, Taib Mahmud, would have lost hands down.

Najib, who was by then facing criticism from his sour-faced party predecessors, concluded that some good old-fashioned cheating was in order, to assure a 2013 win.

So, he set about employing some of the mountains of stolen cash he had already begun to amass (as one does in BN) from the made-for-purpose slush fund, 1MDB.

The rest is history.  Najib bought and cheated his way through the 2013 election – and only just won at that.  Time to put the pesky Anwar into jail and initiate a clampdown, clearly.

The ‘reforming’ Najib had already learnt his lesson by the point last year, at which the horrible exposure of all his criminal thieving from 1MDB started to come to light, thanks again to that online media phenomenon, which was so far free from all the restrictions BN impose on the press and broadcasting.

WHAM!  Back against the wall and under the spotlight, Najib has swiftly turned from a ‘reformer’ into a reactionary thug-dictator, determined to protect his perilous position.

After all, if he fails, he knows that the forces of law and order have an inevitable route to take when it comes to grand theft and bribes…. not to mention all the other past sins involving Najib, which ought to have disqualified him from ever standing for the job of Prime Minister.

No one will give credence to the outcome of Sarawak’s sad election therefore.  The real issue is what will Malaysia do about Najib and the shocking situation with BN?