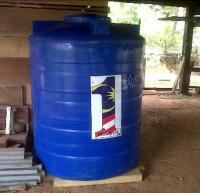 BN smugly refers to Sarawak as its “safe deposit” for votes – a telling analogy in the land of ‘money politics’.

So certain are they that they can bully, bribe and if necessary cheat the ballots in the remote and isolated rural communities of the state, that their toady election commissioners have forced the creation of another 11 of these tiny seats, carved out of already under-populated constituencies.

However, for Najib, this phoney election has developed a pressing significance.

It has become his opportunity to ‘demonstrate’ that despite the mountains of evidence over his criminal behaviour and months of illegal abuses of power in order to cling on to office, he has ‘popular support’, the ‘love of his people’ and a ‘validation’ that he will claim gives him legitimacy above the law of the land.

Don’t think he won’t try it.  This is a man who spins fake sheikhs and claims that millions arrive in his bank accounts without him knowing about it. He explains that when he spent this stolen public money on bribes, diamonds and silk fashions he was gifting it to orphans and flood disaster victims!

So, Najib will have no problem whatsoever with pretending that a win in Sarawak’s rural constituencies represents a ‘vindication’ for his entire record of government from the whole of the Malaysian people.

Sarawak Report has further inside information about how Najib’s game plan moves on from a Sarawak ‘win’.  He plans to then pump-prime the economy, at enormous future cost to the taxpayer, in order to create a false sense of well-being and then, just short of the next general election, he will hand over to some compliant fellow (already named in close circles), who is willing to take on the poisoned chalice in return for granting Najib and Rosmah full immunity and a safe exit to say, Turkey, where he still has a liquid bank account.

Thus Najib plans to be remembered as a great and loved leader, who brought prosperity to the nation, before his successor instantly destroyed the economy! 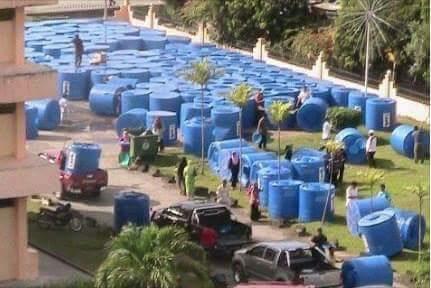 Progressive economy? – “1 Malaysia” rainwater butts in Sarawak, waiting for the election to be called before being distributed to thirsty voters…

For this reason the increasingly desperate Prime Minister has been visiting Sarawak insistently for months, currying favour with his savvy hosts, who have blown hot and cold, until finally Adenan broke out in full praises and support just short of the deadline to announce the polls.

Najib should take a Sarawak wife, he offensively jested, and announced he will support Najib in charge for ever!

We can assume, therefore, that a deal has been struck at high level, in the way BN manages its affairs, and that we will see some of the terms emerge during the election campaign.

Money, of course, as well as a free hand over state resources for the local hard-men.  Najib has openly admitted, after all, that a large chunk of the huge sums that came into his bank accounts in 2013 were to pay for the Sarawak election.

Remember, our expose of the ‘Sarawak school building project’ for RM560 million, signed off by Najib just days before the election, at the request of none other than the SUPP leader Peter Chin?  The schools have unsurprisingly evaporated… so what happened to the money? 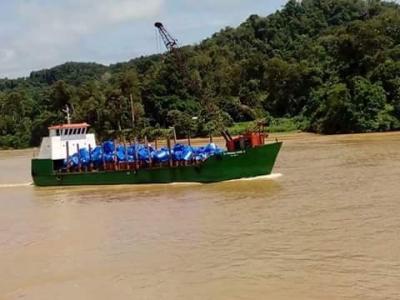 Hooray, it’s the election! At last BN will hand us a plastic container to catch fresh water, since the rivers are now polluted by their oil palm and logging.

We will see other negotiated gestures emerge during the campaign, designed to give hope to that 75% of Sarawakians, who say they want more autonomy and economic justice from their relationship with Malaysia.

Perhaps, Najib will announce a ‘willingness to consider’ the 20% royalty demand on the state’s own oil revenue, after BN wins?  Big deal!

Meanwhile, the disgraceful emblem of BN’s ‘economic achievement’ in Sarawak started being rolled out across the state, the moment the starting gun for the campaign was announced.

Great fields of waiting water butts are now being loaded on to lorries and boats and fanned out to the dirt poor communities, to whom these plastic rain catchers will be presented as shining symbols of six decades of “progress and development” brought to them by BN! 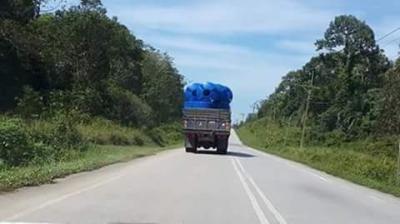 Remember to thank the BN YB for his personal generosity and give him your vote!

These poor rural people will indeed be pathetically grateful to receive these receptacles for fresh water.

Over the past decades the plunderous policies of the federally backed criminal elite under Taib and his close political ally Adenan have removed the clean waters and plentiful forests they once relied upon.

These BN enforcers have been too greedily focused on removing the billions of dollars worth of timber and parcelling out palm oil concessions, to spend time and money on replacing these necessities with modern water supplies and means of production for these communities. 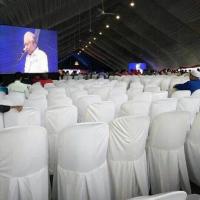 Words, such as “progress” and “modernisation” are far cheaper and easier to bandy about – what’s more if you assist or educate such people they will start to articulate their anger at the theft of their native lands and wealth.

For Najib, Sarawak is in many ways the last throw of carefully loaded dice, after months of gambling that he can bludgeon his way through this corruption crisis of his own making.

It is here that BN can exert raw, thug rule with few to see it.  To mask the reality, Adenan has put on a charm offensive, designed to reassure that he is drawing back from the policies of Taib Mahmud, his life-long political ally, who gave him the job.

Crucially, the rural folk are entrapped by a state-controlled media, who present only what the government want them to know and understand.

– Voting against BN is the same as voting against the government, which is seditious.
– If you vote against BN then you will make an enemy of the powerful government, who would otherwise bring gifts, like water butts
– If you take the money that has been brought by the kind BN and guarded by police-officers overnight to be handed out by them on polling day, but then do not vote BN, you are illegally breaking your promise, for which you were paid
– You ought to reward the kind BN YB, who has personally gifted you up to RM50 in return for your promise to vote for him. Ignore seditious opposition candidates who point out that BN are in fact only giving you a tiny return on the billions they took from you and your lands and kept personally for themselves.
– If you do defy all the above and vote against BN, be under no illusion – the powerful government will know what you did.  They will personally seek you out and punish you. If you have any electricity supplies they will be cut off to your community in retribution and the road we have been promising each and every election for the last 50 years will never come!

Who is to counter such messaging?

Sarawak Report’s sister organisation Radio Free Sarawak dodges jamming and threats to keep broadcasting shortwave to these communities, pointing out, for example, that the defiance of the Baram Dam community brought them reward not punishment from the cowardly state leadership. 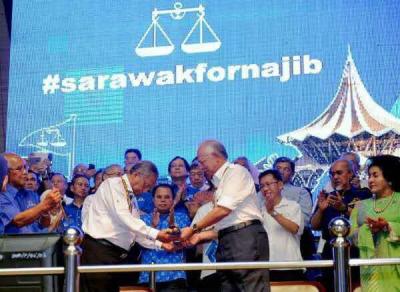 Adenan has offered Sarawak to Najib… what was his price and why should he get away with it?

The people of Malaysia also must also do their utmost together and individually to reach out to their rural cousins in East Malaysia and tell them to use the power they have and to demand to be allowed to watch the election counts from start to finish.

Adenan, who pretends to be different to Taib, but in fact does exactly the same in every department, has started banning opposition and civil society leaders from visiting Sarawak, as is their absolute democratic right, in an election period especially,

So, it is the ordinary folk of Malaysia who have to make things happen.  They should travel to Sarawak, visit the longhouses or tell their friends and workers from Sarawak, over in Johor and West Malaysia, to call their parents and grandparents and tell them, the time has come, enough is enough.