ANZ Bank - Struggling In A Quicksand Of Bullshit? 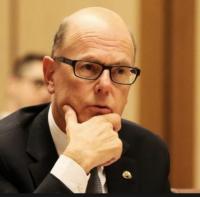 Why appoint board members and top execs if they can’t represent you Mr Graham Hodges?

When something has gone horribly wrong it is better to cut loose and ‘fess up’, rather than argue the toss, which soon becomes akin to struggling in quicksand.

Australia’s immigration authorities have already made this mistake over Sirul’s video production activities behind bars.  Now ANZ Bank appear to be doing the same over their liabilities concerning Najib’s vast AmBank accounts.

Clearly, both parties hoped that by issuing denials they could fend off the press until interest moved on.  They are learning that, to the contrary, the 1MDB story has a way to go and that their insincerity and bluff has landed them right in the mud.

Yesterday, Graham Hodges, the Deputy Chief Executive of ANZ, was left visibly squirming as he was grilled by the Australian Senate Committee over why all his bank’s senior executives on secondment to AmBank had failed to blow the whistle on the Najib accounts?

The media and politicians in Australia have also started to wonder out loud about the mass exodus from the AmBank board by ANZ figures late last year (as the scandal started to spiral), along with the sudden retirement of the architect of the whole Malaysian connection, former ANZ CEO Mike Smith, in September?

Poor Graham is due to step onto the AmBank Board himself, which puts him right in the firing line. So, what was his explanation?

According to the Sydney Morning Herald, Mr Hodges said the bank was limited in what it could do to address the AmBank scandal because it was only a part owner of the bank:

“It’s a more nuanced issue to be honest. Clearly the directors on that board are not allowed to talk about what’s going on. We don’t control that bank,” Mr Hodges said.

“As an ANZ executive and one [who] is about to join the board, are we happy with that? Certainly not,” Mr Hodges said.

“But that’s different to implying the culture or the integrity of someone is lesser because they sat on that board.”

Unfortunately, it appears that the last thing that Mr Hodges was being with the above remarks was entirely honest. There is nothing “nuanced”, for example, about the statements made earlier by his bank about the appointment of these senior executives on secondment to their subsidiary in KL: 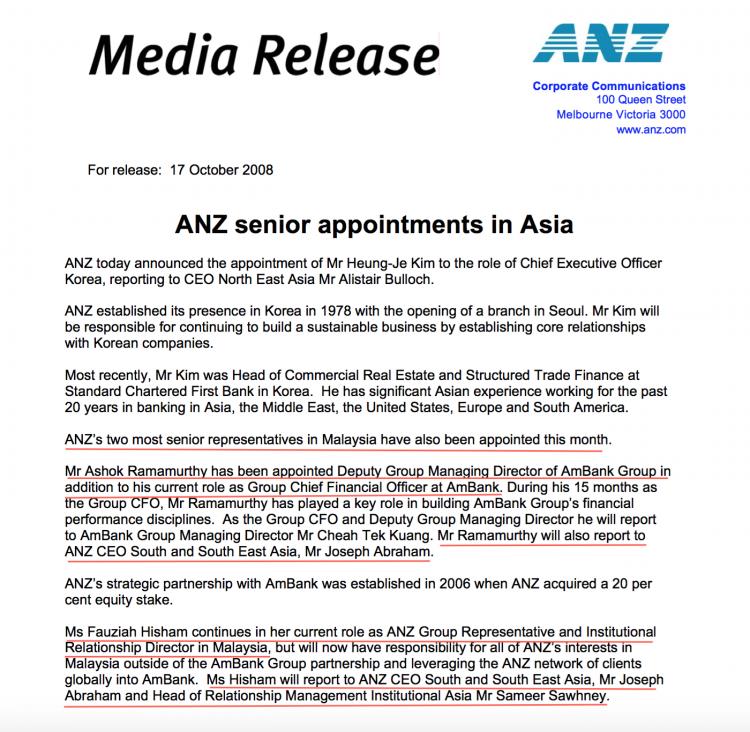 Were they merely reporting on the weather in KL?

The above statement (dug out by economics writer Ganesh Sahathevan) makes entirely plain what has always been understood, which is that the appointment of these senior ANZ officials into the top positions in their Malaysian shareholding was to ensure the bank was run according to the same standards and that the senior shareholder, ANZ, knew how the business was being handled.

Ramamurthy was officially reporting to ANZ’s South East Asia boss – so how come he was not allowed to speak about how he was running the bank?

Both the seconded Chief Executive and the seconded ANZ Group Representative were publicly stated to be directly “reporting to” senior executive figures back home at ANZ HQ in connection with their posts in Malaysia.  Were they merely reporting on the weather?

The Australian media has already pointed out that the terms of the “strategic partnership” contract, forged between the two banks at the time ANZ purchased its interest, committed AmBank to follow not only Malaysian best practices, but also the regulatory controls in Australia.

This was to reassure shareholders in ANZ and clients.

So, the talk in recent days by ANZ executives of their seconded personnel being under some sort of constraint not to violate the independence of AmBank by informing ANZ of irregularities is best termed as bullshit.

Senior executives like Hodges need to wade quickly backwards from this line of argument before it sucks them down like the various key executives in Singapore and Switzerland, who have already fallen foul of 1MDB.

Because, despite Mr Hodges’s ‘culturally inclusive’ explanation, integrity is not a relative or nuanced commodity. It’s the difference between truth and lies.