Sarawak Report can now shed more light on the pivotal role of the Aabar-owned Swiss Falcon Bank in channelling money from 1MDB, which later mysteriously disappeared.

It has emerged that Falcon held accounts in its now closed Hong Kong branch for a number of key 1MDB entities, which have been at the centre of concerns about missing millions from the fund.

Both of the latter two 1MDB subsidiaries were enmeshed with Falcon’s parent company, Aabar Investments PJS, in raising loans through Goldman Sachs of US$1.75 billion each, in order, supposedly, to purchase power generating investments (the so-called power purchase deals).

There has been heavy criticism that these bonds involved an apparently unnecessary co-guarantee from Aabar’s own parent company, Abu Dhabi’s sovereign wealth fund IPIC, which demanded that 40% of the funds raised be ‘deposited’ with IPIC. Investigations by the Wall Street Journal have established that although a total of US$1.4 billion was recorded as being sent to Aabar/IPIC by 1MDB for this purpose, the IPIC accounts do not record any receipt of the money.

There were also certain options written into these agreements, which were disadvantageous to 1MDB in permitting Aabar to take up ownership of the purchased power generating plants. 1MDB therefore paid just under a billion more in dollars to later buy Aabar out.

However, as the Wall Street Journal has further reported, this money also failed to be registered in IPIC’s records, amounting to a total of US$2.4 billion that appears to have gone missing from these power purchase deals alone, so far.

“The fund’s website and financial filings said it paid $1.4 billion to Aabar—without specifying a full name—as a cash deposit in 2012. The fund also paid nearly $1 billion in 2014 to extinguish options given to IPIC for guaranteeing bonds, according to a draft report by Malaysia’s auditor general.

IPIC has denied to 1MDB that either IPIC or Aabar ever received this nearly $2.4 billion, said people familiar with the matter”. [Wall Street Journal, Feb 29th 2016]

It now appears that not only were 1MDB involved in these disadvantageous deals with Aabar, but they were also processing business through Aabar’s own private bank. 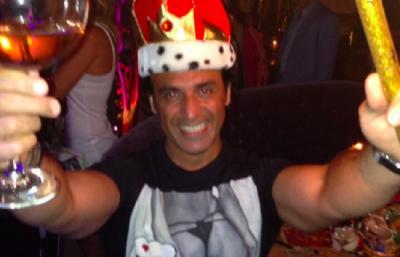 Khadem Al Qubaisi, Chairman of Aabar and Leemann’s boss till he was sacked last year

The seriousness of this matter is escalated by the fact that there is now evidence that money supposedly sent to settle the multi-million dollar payments to Aabar were actually sent to a bogus company of almost the same name based in the British Virgin Islands, Aabar PJS Ltd.

The WSJ reported in December that it had evidence US$850 million was transferred to this account in the course of 2014.

Last month papers deposited in a Singapore court case further revealed that this bogus company had its own bank account with another Swiss private bank, BSI, which also managed 1MDB’s Brazen Sky account, an SRC International account and numerous accounts for Jho Low.  BSI is currently under investigation by the Singapore authorities over these dealings.

The web of companies linking the now debt-laden 1MDB; its joint venture partners Aabar and PetroSaudi and the payments that were subsequently been made into Najib Razak’s accounts therefore appear to have a remarkably small number of nexus points – all linked to Jho Low and his close friend Khadem Al Qubaisi, the Chairman of Aabar.

It is also highly significant news that 1MDB GIL also held an account with Falcon in Hong Kong.  Critics of the fund’s lack of transparency have long requested fuller information about how this subsidiary was being managed. 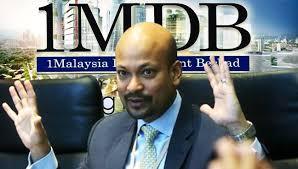 CEO Arul Kanda made a statement last June confirming that 1MDB GIL had assigned RM5.1 billion out of US$3 billion raised through Goldman Sachs in March 2013 to invest in projects.

However, DAP’s Tony Pua complained Kanda had continued to provide no concrete details about which projects were being invested in or where the money was being held.

By 2014 half the money had been “utilised” on working capital and debt repayments, according to the 1MDB annual report, but the projects for which it had been allegedly raised (including the setting up of a petroleum reserve in Tanjung Piai, Johor and the so-called Tun Razak Exchange) had never materialised.

The money supposedly in 1MDB GIL constitutes, along with the money raised for the power purchase deals, a significant chunk of the RM42 billion debt that the fund has been struggling to sustain over recent months.

The latest debt repayments have been serviced by none other than IPIC, thanks to a deal made with the former CEO Mohammed Al Husseiny, shortly before he was sacked by the Abu Dhabi fund in May last year.  IPIC took on a loan of one billion that has been rescinded from 1MDB by a Deutsche Bank consortium in June and has continued to cover the company’s debts. 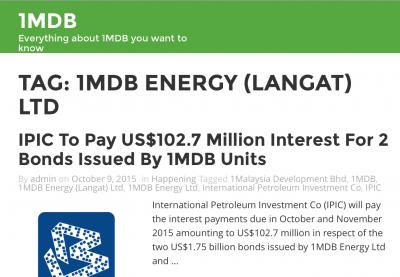 Committed to paying 1MDB’s debts till June, in return for an equivalent repayment in assets

Under the deal the Malaysian Finance Ministry will be obliged to provide IPIC with assets equivalent in value to the multi-billion dollar debt repayments made on its behalf over the past 12 months by June of 2016.

So, now we know that the Aabar Falcon Bank was also holding an account for this mysterious 1MDB ‘global investment’ vehicle, which has failed to account for its spending, according the DAP Public Accounts Committee member, Tony Pua:

“I’ve also repeatedly asked where is the RM5.1 billion of funds invested by 1MDB Global Investment Limited and yet the Finance Minister Najib Razak consistently and repeatedly refused to list the investments made by 1MDB GIL in Parliament.  He even refused to disclose where the fund is managed or located!” bemoaned Pua last year.

Now Pua has part of the answer.  However, what is not so far publicly known is how much of this RM5.1 billion remains in any of 1MDB’s bank accounts.

What is established is that Falcon Bank closed its own Hong Kong operations in early 2014.  The bank passed on its accounts to another Swiss private bank EFG, headquartered in Zurich.

Zurich-based EFG International will look to take over Falcon’s Hong Kong business and could assume around 883 million dollars in assets under management. EFG was established in Asia in 2000 and has around $16.34 billion under management in the region, [reported the WSJ]

Allegedly, the Chief Executive Officer for the bank, former senior Goldman Sachs executive Eduardo Leemann complained that competition in Asia was simply too hot for the bank, despite its plainly lucrative business with 1MDB and indeed its management of the “donor” account Tanore Finance Corporation, which paid US$681 million to Najib’s KL accounts the preceding year. 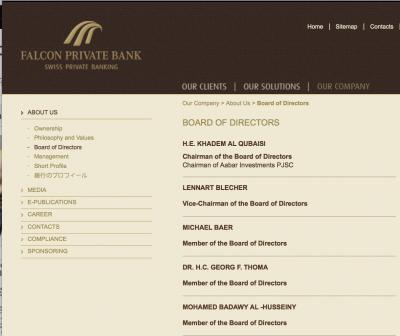 Falcon was led by Al Qubaisi in 2009, then Aabar CEO al Husseiny

When Falcon Bank was initially taken over by Aabar from the banking giant AIG after the 2008 financial crash the man who carved the deal was Khadem Al Qubaisi, Chairman of Aabar and Chief Executive of IPIC – right hand man to Sheikh Mansour, a brother of the Emir Sheikh Khalifa of Abu Dhabi.

Al Qubaisi was the first Chairman of the re-named Falcon Bank in 2009.  He was replaced by his own right hand man in this position Mohammed al Husseiny, the CEO of Aabar, who was in that position at the time the 1MDB deals were forged.  Al Husseiny later left that position, but re-joined the Board of Falcon shortly before he was like al Qubaisi sacked from all IPIC related positions last year.

The party ended for Al Qubaisi shortly after Sarawak Report exposed his double lifestyle last March and revealed his dubious connections with 1MDB’s Jho Low, including millions of dollars of payments from the company Good Star Limited, already notorious for its role in siphoning money out of 1MDB in the earlier PetroSaudi deals.

Khadem was not only sacked, but placed under house arrest and interrogated on the instructions of the Emir.  He is now allegedly exiled from Abu Dhabi and the subject of extensive investigations by the state, regarding the billions of dollars that have been lost from Aabar over the past few years. 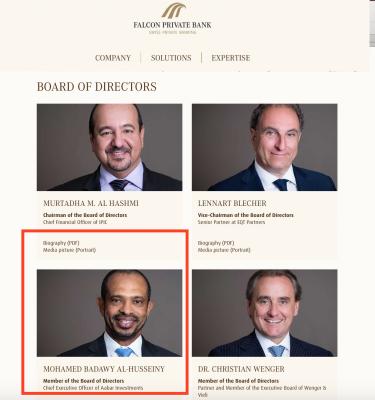 As Sarawak Report has reported, while Aabar has lost an estimated US$50 billion in bad investments, Khadem himself has developed a multi-billionaire lifestyle during the period post 2009, investing in major property and entertainment businesses in the United States and beyond, particularly through his privately-owned company Tasameem Real Estate LLC.

Al Husseiny has also developed an appearance of fabulous sudden wealth for a former pizza delivery man from Kenya.  Indeed it was Al Husseiny, who stepped forward in 2014 to claim that it was he who had personally bankrolled the various film projects of Najib’s step-son Riza Aziz, including the hundred million dollar production, Wolf of Wall Street.

The connections between Jho Low and Khadem Al Qubaisi are established both in business and socially as “close”.  Both men are frequent party-goers and gamblers together in their favoured spots of Las Vegas and the South of France.

The question now being looked at by regulators is where exactly did they get all their money and how is it related to the problems now faced by 1MDB and to the mystery money that appeared in the bank accounts of 1MDB’s ultimate boss, the Prime Minister of Malaysia?