The world learnt about the sort of salary that your friendly Singapore bank manager can hope to earn, when Mr Yak Yew Chee deposited his court papers yesterday.

No less than SNG$27 million in salary and, more importantly, bonuses in just four short years roared the news headlines. 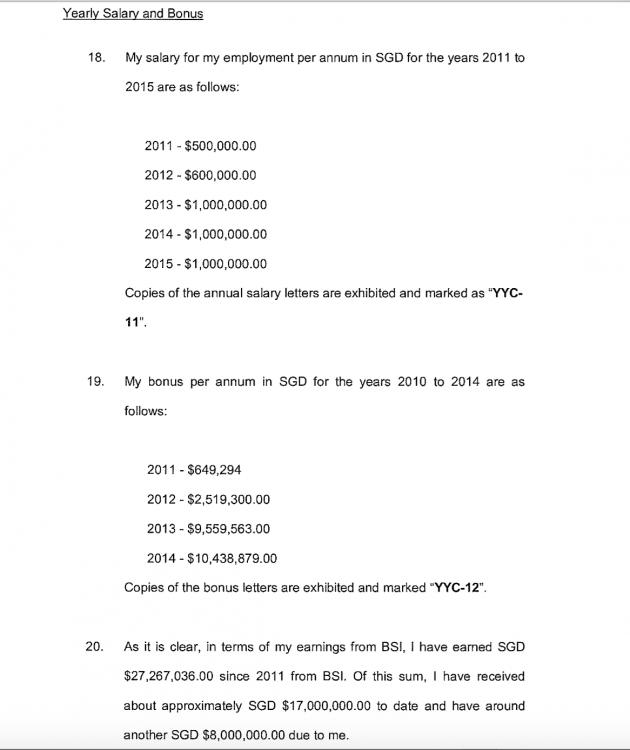 Another revelation that came out from the highly informative dossier, dumped by Mr Yak before the courts was that, despite him being on what was repeatedly described as “unpaid leave” since April 2015, the bank had nevertheless been sending him monthly salary cheques of $83,000.

The cheques, instead of normal bank transfers, were a handy concession by the bank, because he could cash them abroad, where his accounts were not frozen like they are in Singapore.

Yak provided the court with copies of the cheques to show just how generous his BSI employers were (above).  The documents also showed that to begin with Yak had signed an agreement to take this so-called “unpaid leave” in May and to cooperate with the bank. 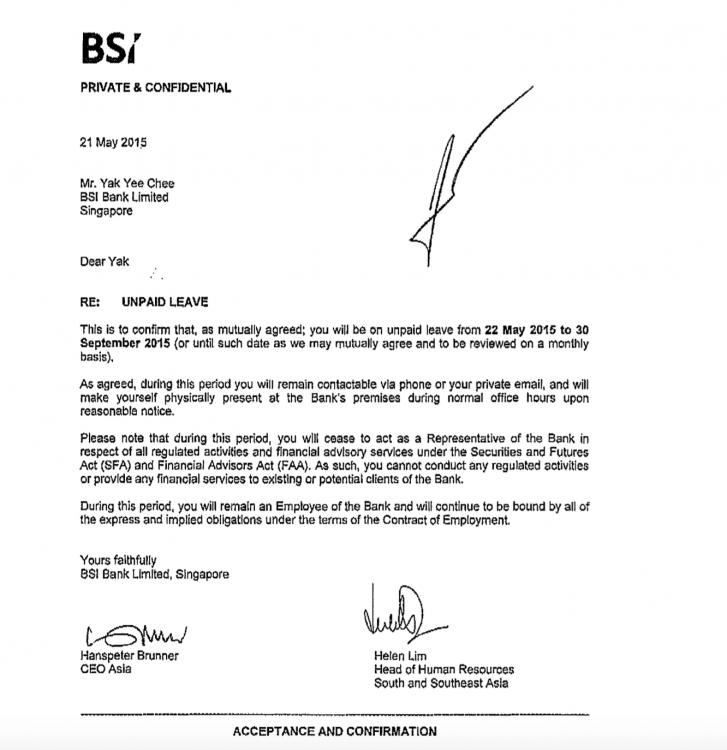 Agreement that was to turn sour

However, friction had already broken out between his legal advisors and the bank, with Yak making plain in April that his understanding that the measures being taken were to prepare the bank in case of an allegation being made against it and to protect him were not being upheld. 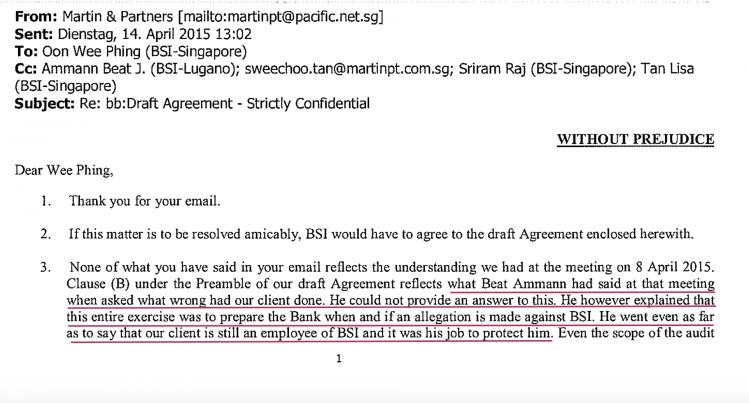 Yak was apparently being kept on the payroll in order to ensure his continued cooperation with the bank.  However, the email trail makes clear he was suspicious of his employers motives in case they pinned the blame on him.

Was this the real reason he took his case public?

Jho Low links to 1MDB confirmed by his bank manager

Yak’s now public court papers have certainly thrown a great deal more light onto how the various Singapore private banks were handling Jho Low and his related accounts and in the process have scotched for ever the on-going lie that the businessman had nothing to do with 1MDB after 2009, as has been doggedly maintained by CEO Arul Kanda and Low himself.

Indeed, the proposed statutory declaration, which was being negotiated between Yak and his BSI employers in order to present the bank’s position to the investigating authorities, included the following damning points:

“I have not at any time entered into any arrangement to give of cause to be given any Gratification …relating to the accounts held with the BSI group by Brazen Sky Ltd, Low Tak Jho, 1Malaysia Development Berhad, Aabar Investments PJSC and/or their respective affiliates….

We would clarify that the additional parties named are closely linked in the matrix of business relationships involving 1MDB/Brazen and Low, and we trust your client would agree that Gratification could conceivably have involved them and would be willing to negate any such suspicion.”

In other words BSI Bank were confirming that the affairs of 1MDB, Brazen Sky and Jho Low were inextricably intertwined… along with the bogus Aabar subsidiary Aabar Investments PJS Limited, which Yak also mentions in his statement (below). 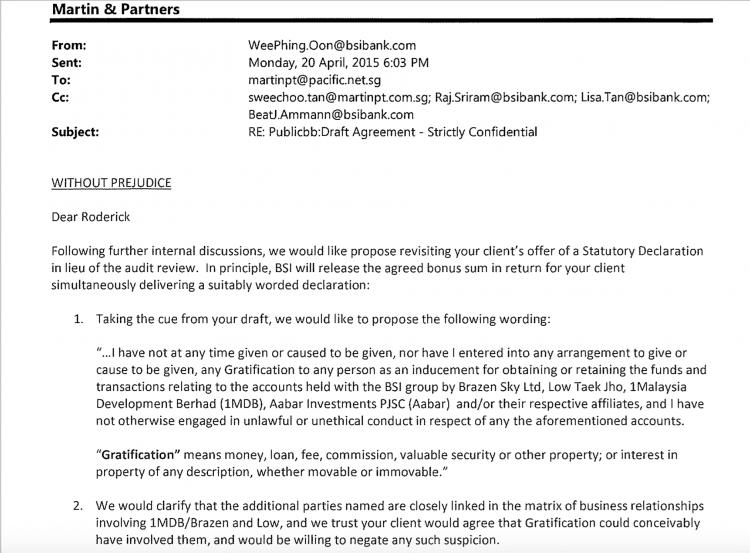 What the bank negotiated with Yak to say in his statement – If Yak cooperated, then on top of his monthly pay they would release his “agreed bonus” as well. So much for “unpaid leave”.

Yet, over the bridge in Malaysia, the Prime Minister and his diminishing coterie of die hard supporters continues to ban this website and bully other online commentators using ‘anti-terrorism’ laws, on the grounds that we are promoting “falsehoods”.

To the contrary, according to 1MDB’s own bank, what we have said on this matter (as on several others) is now confirmed to be true.  This may be why the PM’s tame AG has turned today to threatening life imprisonment for leaking ‘state secrets’ instead.

Yak made his tell-all application to the court, purportedly to unfreeze his accounts, in order to pay bills in Singapore.  However, the Singapore Commercial Affairs Department countered with an aggressive rebuttal.

Responding to his application, the CAD pointed out that Yak had “squirrelled” over $5 million out into foreign banks before they had managed to freeze his accounts and that they had only some $7.91 million of his admitted $27 million in earnings under lock and key.

That left a “staggering S$9 million unaccounted for” raged the authority, which therefore argued that Yak could quite easily pay his bills by repatriating some of the millions he had parked abroad. 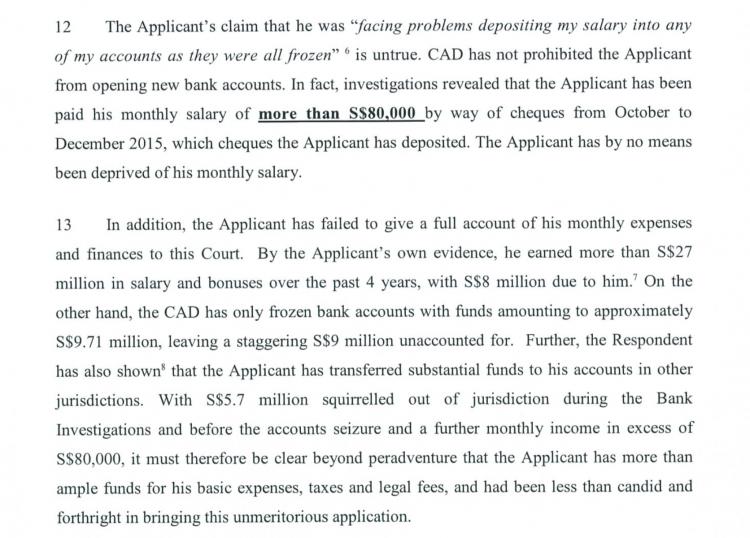 CAD confirms that BSI’s claim about unpaid leave was untrue

In the event, the authority reached an accommodation with Yak at the last minute on Friday, agreeing that the banker could bring money back from abroad to pay his bills, without measures being taken to freeze it.

It left the judge wondering why all this court time had been wasted… and the world’s media at liberty to examine all Yak’s dossier of insider documents laid before the court in the process.

It seems that Yak’s real reason, therefore, may have been to counter what he plainly suspected were manoeuvres by the bank to make him the scapegoat for what he insists were decisions that went right up to the top of BSI.  Certainly, the dossier proves that by January this suspended relationship manager for Jho Low and 1MDB was at loggerheads with his bosses.

At issue were repeated demands by his line manager Hanspeter Brunner, CEO Asia, that Yak agree to attend the bank for questioning about a charge that he withheld information from his superiors about a ‘notice of security relating to one of the bank’s clients’.

HansPeter Brunner and his legal team parried for months with Yak, trying to get him to cooperate in informal talks at the bank

Other papers make it perfectly plain that this ‘notice of security’ referred to none other than the massive loan made by Deutsche Bank of nearly US$1 billion to 1MDB, to finance its debt repayments in late 2014.

That loan was secured on the apparent US$1.03 billion alleged to be in 1MDB’s subsidiary account named Brazen Sky at BSI in Singapore, which Yak also managed.

After Sarawak Report revealed in May that the Singapore authorities had found that Brazen Sky actually had no cash in that account, Deutsche Bank pulled the loan.

In his correspondence with BSI, Yak himself claimed that he had done nothing without the approval of his bosses and that he had not referenced the said notice, because the client had told him not to proceed.

I would have sought management approval if the client (1MDB) had confirmed they wished the arrangement to proceed …..Yak explains why he did not tell his bosses about the ‘security check’ which Deutsche Bank requested on the Brazen Sky account for its billion dollar loan to 1MDB

In all the correspondence, in fact, Yak repeatedly claimed that his superiors at the bank were fully aware of all his transactions with these mega clients of the bank. 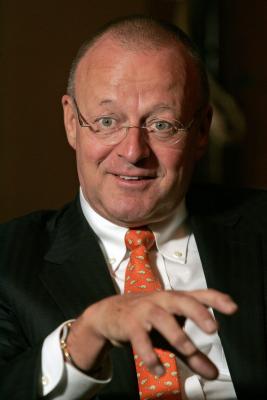 Much of the increasingly hostile dialogue surrounded Yak’s plain reluctance to be called in for oral questioning about these matters by the bank and to sign their ‘notes’ on the proceedings without proper legal protection, full recordings and written questions in advance of any interrogation.

Saying he “had experience” of the bank’s record in such matters, Yak made clear he was fearful that his bosses would use anything he said in the informal and unrecorded meetings to pin all the blame on him.

In response, his superiors, whom we now know were still paying him and further offering a potential bonus payment if he cooperated with their wishes, expressed a growing anger and frustration over Yak’s refusal to cooperate, except on his own terms of written questions in advance and a full recording of the discussion being made. 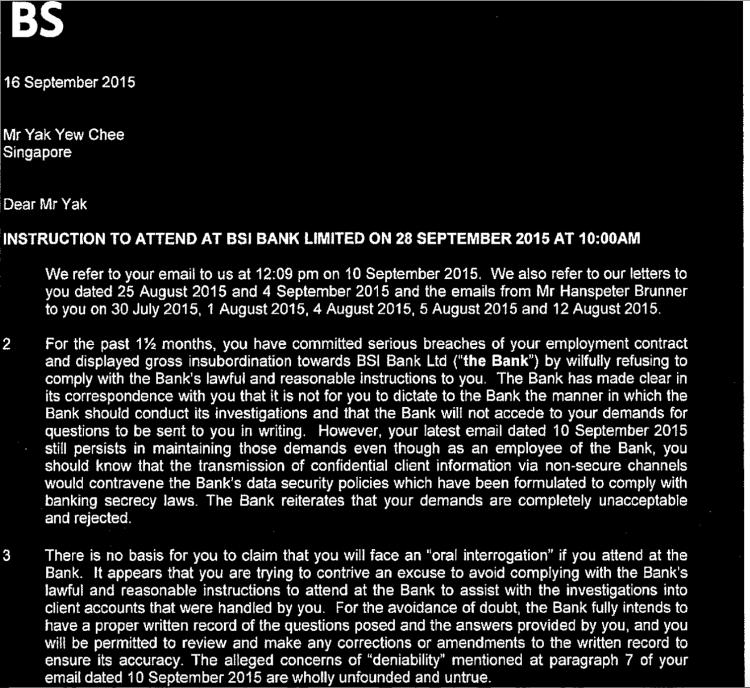 But, Yak was adamant that he did not trust his employers to make a fair record of the interview.  If BSI had continued to pay him and discuss his bonus during this “unpaid leave” it wasn’t producing the desired cooperation.

Thank you for your immense contribution

Yak’s court deposition carefully contains ample evidence to back his point that far from being a rogue banker, he had been BSI’s star employee right till the moment when the regulators began investigating Jho Low’s accounts at the bank.

Indeed, the documents show, he was praised from the very top for his “fantastic success” in bringing in business by none other than Dr Alfredo Gysi, the Swiss boss of the BSI group, who sent him a personal letter of congratulation at the end of 2011.

Incidentally, it was shortly after Yak joined in September 2009 that Jho Low had opened his ADKMIC account and several other personal and business accounts at BSI and started transferring half a billion dollars from his RBS Coutts Zurich Good Star account to BSI.

Was this the reason for the plaudits?

CAD records recording the Jho Low company accounts brought to BSI in 2011, along with an $11 million personal account

“Hanspeter told me about the fantastic business success you achieved in the last few weeks…. He also told me this was done in close teamwork.. thank you for your immense contribution not only to the growth of our new Asia business but to BSI Group as well” gushed CEO, Dr Gysi. 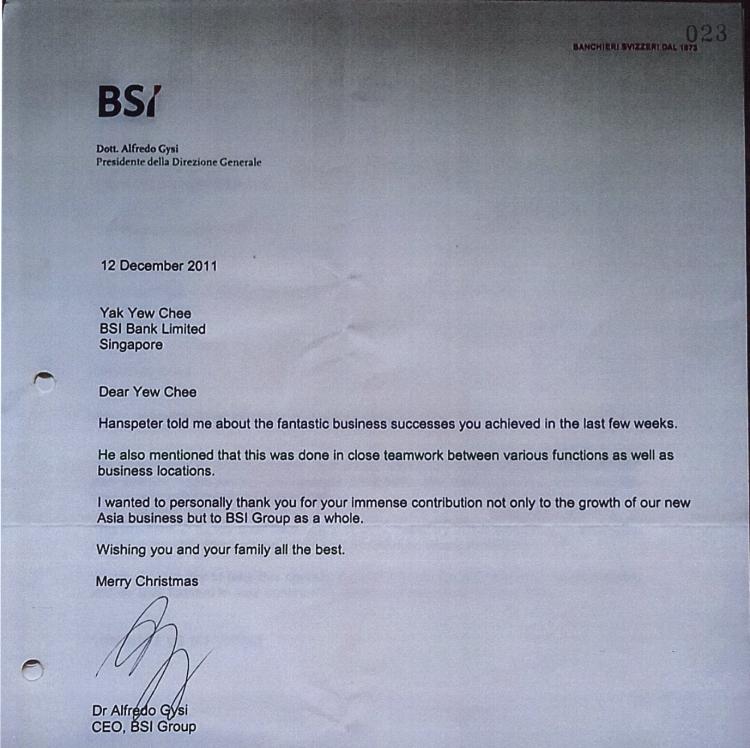 It should be remembered that Yak transferred to BSI from Coutts Singapore, from where he had earlier managed Jho Low’s accounts and it can be surmised that one of the reasons he was engaged on a handsome starter salary of $500,000 a year was for the very reason that he was bringing a very wealthy set of clients.

You shall be a Senior Relationship Manager – starter salary $500,000

One can also only conclude that the extraordinarily rapid salary increases that Yak subsequently achieved at BSI and his enormous bonus payments were likewise owing to the immense amount of business his clients, by now not only Low, but Low’s related 1MDB, Aabar and SRC accounts were bringing in too.

His declaration, devised in collaboration with his bosses at the bank, that he did not receive any ‘Gratification’ from these clients as an incentive for handling these accounts would therefore seem to be entirely plausible.  After all, Yak was receiving plenty of gratification from his own employers for managing these transactions, so what further incentive did he need?

Don’t make me a scapegoat

Sarawak Report therefore suspects that the reason why Yak Yew Chee has chosen to place all this material in the courts and before the public eye is to attempt to protect himself from being singled out by BSI Bank and the prosecutors as a lone ‘rogue banker’ in this affair.

His misdeeds, if there were misdeeds, in handling suspect transactions by politically connected individuals linked to public funds were known about and ultimately approved by the hierarchies of both BSI and earlier Coutts bank, according to Yak 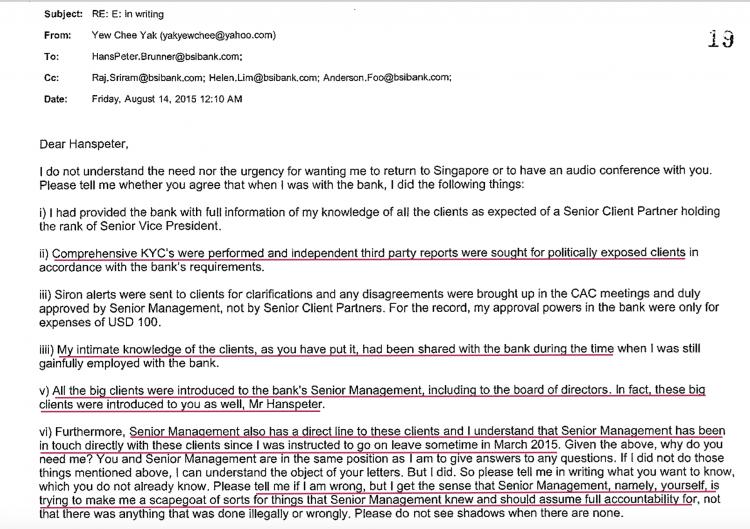 Certainly, records show that neither Coutts nor BSI initiated proceedings to investigate the multi-million dollar suspicious transactions managed by Yak until the regulators moved.  They rewarded Yak handsomely instead.