Master Of The Universe... But Not A Doctor Of Philosophy After All? 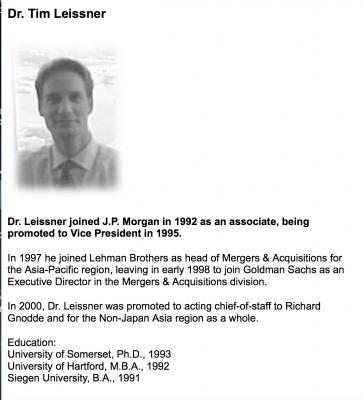 The high-rollers of Goldman Sachs habitually seek to justify their boundless profits from handling other people’s money by explaining that they are simply far cleverer than normal mortals.

Those who suspect they may merely be bragging, in order to justify the unjustifiable, have often been silenced by the impressive strings of qualifications that these guys seem able to pick up like passing confetti, while in the course of their many money-making activities.

But in some cases, all may not be as it seems.  Goldman’s now resting Asia boss, ‘Dr Tim Leissner’s’ qualification of Doctor of Philosophy in Business Administration, for example, may not quite add up to what one would expect – i.e. three years of hard study and intellectual achievement at a renowned institution.

Perhaps a hint of the problem is to be found in this banking academic’s rapid accumulation of his titles – a Masters in 1992 in the US and then a Ph.D in 1993 from the UK – Wow!

Indeed, observers have pointed out to Sarawak Report that Leissner’s vaunted doctorate is declared to be from an institution called the University of Somerset, which was widely de-bunked for being a “degree mill”, before apparently shutting at the end of the 1990s. 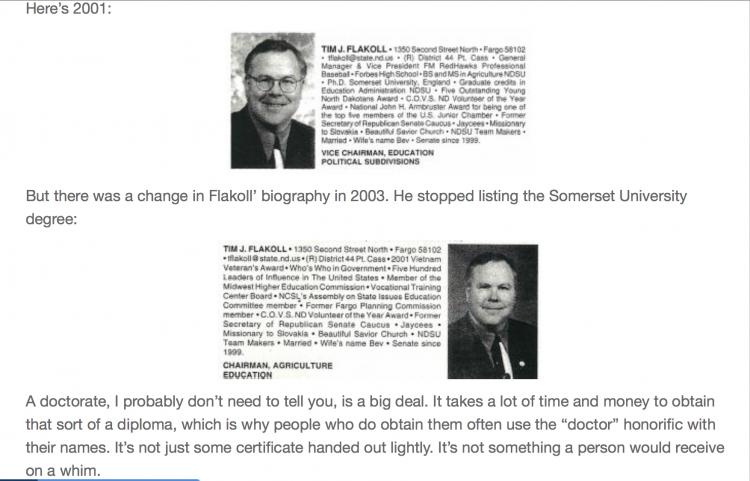 This US Vice Chancellor candidate was panned for his temporary use of a Somerset University Phd.

Note for example the University of Somerset’s presence on the list of Uncredited Institutions of Higher Learning.  Or, read the Times Higher Education supplement’s citing of this ‘mailbox outfit’ as an example of the problem of bogus degrees in its article called “I would like one Donor Kebab and a PhD to take away” published in 2000.

“What allows the .. peddling [of] these degrees to operate legally in this country, is a loophole in the 1988 Education Reform Act. The law says that anyone can call a dingy back room above a kebab shop a university, as long as they do not state that it is a British university or claim to give out British degrees. The result has been a growth in institutions with quintessentially British-sounding names, such as the University of Somerset or Knightsbridge University, which have British addresses, but which do not claim to give out British degrees. The target market is the US, where workers in the public sector can earn promotions and pay rises depending on their higher education qualifications. Policing of these universities in Britain is virtually non-existent” lamented the article. 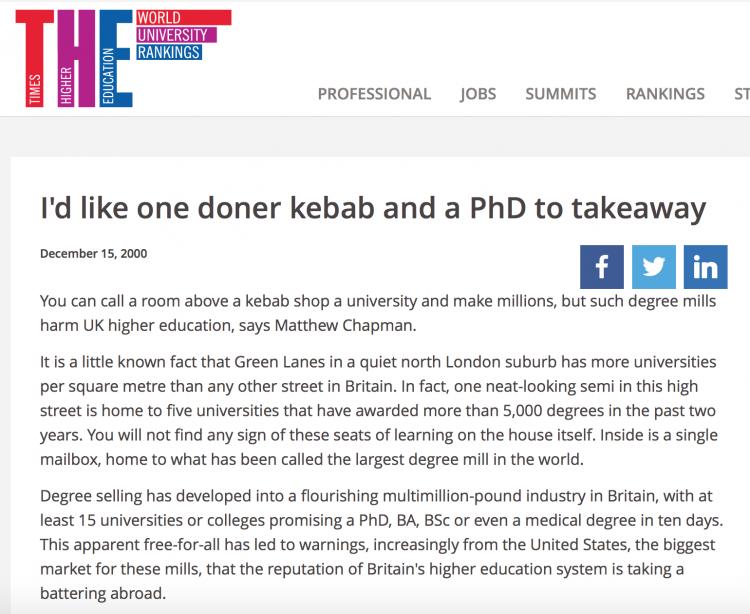 Somerset University was unmasked as a degree mill in 2000

Steps were rapidly taken to try and counter this particularly obnoxious form of fraud and the University of Somerset ought to have been considered well and truly blown out of the water by one particularly amusing article written for an outfit called Credential Watch by a Havard man in 2000 – called “M.A. Required, Ph.D. Preferred:
An Odyssey Inside the Bogus Diploma Mill Circuit”.  It was this tickling expose which ascertained the cost for the mail order PhD from Somerset Uni was a mere £2,695 – chicken feed for a “rock star salary” Goldman guy.

But, no. Spin forward to a speaking event in Hong Kong in 2008 and Tim Leissner was still advertising his ‘academic credential’ on his CV.  Maybe this is what this firm of bankers means by “clever”? 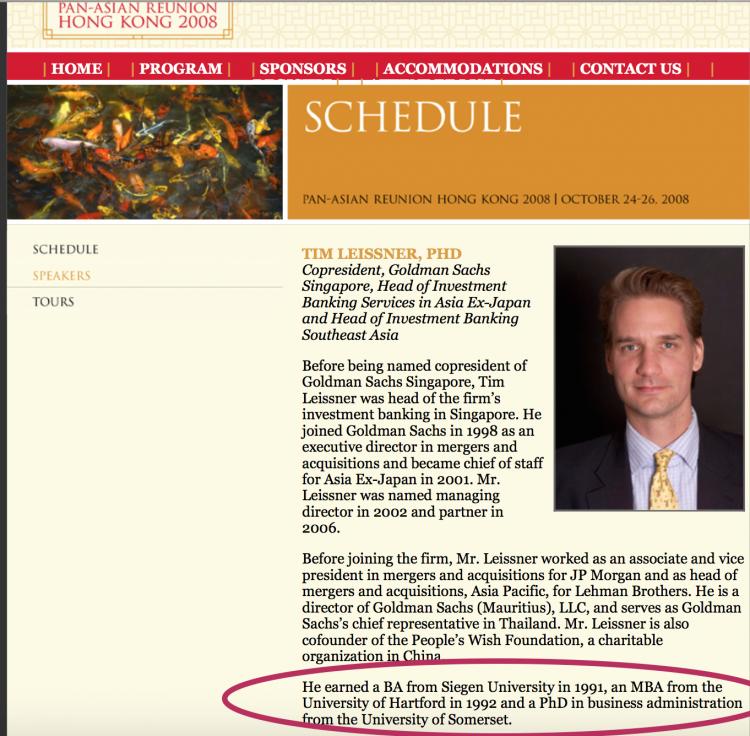 If so, it appears even Masters of the Universe occasionally get found out to be … well frauds.

Of course, Mr Leissner would currently appear in rather deeper water than mere dodgy doctor business, since the world has finally started to question those extraordinary bond deals he master-minded on behalf of his friend the Malaysian Prime Minister for 1MDB, which left the company US$650 million in the red, before they had even seen a cent of the US$6.5 billion supposedly raised for development projects.

The fact that the Goldman fee came to over US$590 million in total alone did not help matters naturally.  It has been surmised that Leissner’s ‘bonus’ would have been considerable. 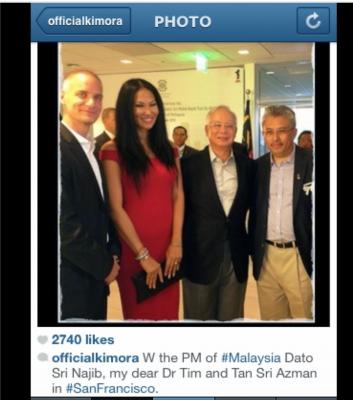 However, to touch on a rather more tabloid side to the story, which is perhaps permissible, given Leissner’s jet-setting profile and ‘celebrity marriage’ to model Kimora Lee Simmonds, it appears the talk in KL is more focused around what has been described as the Arian banker’s colourful history with well connected local ladies.

A series of romances, which were expected to end at the alter, appear too often to have just ended.

One of these was, of course, the ill-fated engagement to Taib Mahmud’s high-rolling niece Elia Geneid, just around the time that Leissner hired the former Deutsche Bank man Roger Ng, whose connections in Sarawak had resulted in large bonds being raised for the State through Labuan – at what opposition politicians have repeatedly commented were eye-watering rates of interest.

It would appear that the link up with Roger Ng provided Leissner his contact with the fabulously wealthy Taib (Deutsche Bank were the joint major shareholders with CMS in the major investment house Kenanga Holdings until last year).  And through Taib, UBG’s Jho Low and also Elia’s Mum, Taib’s powerful sister Raziah Geneid.  After that, Raziah’s big pal, Rosmah Mansor, would have swum into his perview.

By the time Leissner had settled for his celebrity match with Kimora the couple were boasting close friendship with the PM, with whom he seemed to have exclusive business access.

So, maybe ‘clever’ bankers are aware that when it comes to making huge amounts of money it is in fact not so much what you know, but who you know and what you are prepared to do?

So much for the PhD.