Najib And Apandi Become Tangled In Their Own Tales

Yesterday’s headlines of “Najib Cleared” have rapidly translated into guffaws and criticism from the global media, as contradictions and inconsistencies started to emerge from the statements put out by Malaysia’s PM and his own appointed Attorney General.

To start with, the impression Apandi gave at his press conference was that he was reflecting the investigation of the Malaysian Anti Corruption Commission by concluding that there was no case for Najib to answer.  But, this has immediately fallen apart with the MACC announcement that they want his decision reviewed. Open warfare looms. 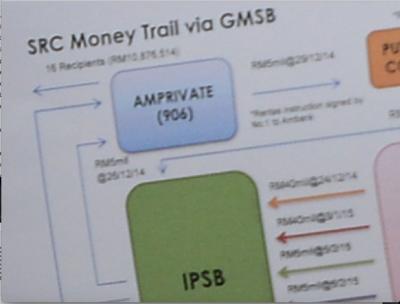 Apandi did not help his own cause in that respect by waving papers from the investigation in his effort to demonstrate that a great deal of work had gone into showing Najib to be entirely innocent of any impropriety.

Close ups of those MACC documents in fact showed the opposite, which was that the agency had identified even more transfers from the 1MDB company SRC into Najib’s accounts than had been previously known about!

Sarawak Report spotted a further RM33 million that went into Najib’s accounts in July/August 2014 from these brandished documents.  Some RM27 million was paid out to 17 unidentified “recipients”, according to the diagrams in Apandi’s own hands.

Who were Najib’s 33 beneficiaries and were there more?

Today, further scrutiny of the paper in his other hand has revealed that yet another “16 recipients” received payments from Najib totalling over RM 10 million from a separate transfer of RM42 million from SRC in December 2014/February 2015.

It therefore appears that a total of 33 recipients received over RM50 million personally from Najib during the course of 2014 and early 2015 from SRC, which had in turn borrowed its money from the KWAP public pension fund.

Since Mr Apandi is so adamant that the payments were an innocent use of Malaysia’s pension money, perhaps he could reveal who these recipients were, in order to reassure the public that they were not, for example, any of the BN MP’s or UMNO division heads, who have been so doggedly supporting the Prime Minister over 1MDB and other controversial matters in recent months?

Meanwhile, it has emerged that the MACC had in fact recommended that three separate charges be brought against the Prime Minister on a number of counts. Apandi had ignored all their investigations and misrepresented their report.

Impossible self-contradictions as SR is vindicated

The botched white wash faltered further, as the Prime Minister and his place-man in the AG’s office attempted to issue excuses for the facts they can no longer deny.

Originally Najib had angrily accused Sarawak Report of “lying” and threatened libel action when we published documents showing that US$681 had come into his personal accounts in March 2013.

We later added that the PM had also received earlier payments into the same account, raising the balance to around a billion dollars, before Najib closed it down shortly after the election in August 2013, following which he returned an estimated US$650 back to his accounts in Singapore.

All this too was dismissed as lies.

We were equally accused of falsehoods when we separately demonstrated that RM42 million had been transferred from the 1MDB subsidiary SRC into some of Najib’s other personal accounts, the main subject of the MACC investigation.

Likewise our story that money from these SRC funded accounts was used by Najib for spending on two credit cards, once more condemned as untrue.

When we further published the information that the MACC investigators had drawn up draft charge sheets against the Prime Minister, before the former AG was unconstitutionally sacked, Sarawak Report was blocked by the Malaysian Government, a warrant was put out for our arrest and draconian new laws were brought in to further curb the online media.

Yet, loh and behold, yesterday the PM and Apandi effectively acknowledged that all our reporting on the above matters had been correct after all (apart from the matter of the MACC charges, which have today also been upheld by the investigations body which has refused to be misrepresented).

To explain their change of tune the two men provided a number of excuses.  However, they have not apologised for saying we were lying nor have they retracted the ban on Sarawak Report.

Those excuses, meanwhile, have proved laughably self-contradictory and inept, leaving both men looking unfit for their jobs.

How could Najib transfer money from a closed account?

Najib has now admitted he had received the US$681 million.  Yesterday he updated his story of an anonymous donor, by claiming his benefactor was from the Saudi Royal Family.

Yesterday, he and Apandi for the first time further admitted our report that much of the money was indeed sent out of Malaysia again in August 2013.

This version of events blatantly ignores the shocking fact that the Prime Minister of Malaysia has admitted to receiving a huge payment from a foreign power to buy a supposedly democratic election. It also blatantly contradicts the next set of excuses the PM came up with to explain the millions that also travelled from SRC into his separate private accounts and credit card spending in 2014.

Because, although for the first time the PM admitted yesterday that our report had true  and that the money had come in from SRC, he said he had not realised that this was the origin of the cash.  Some unknown (as yet uninvestigated) third party was responsible for the transfers.

Instead, Najib says he had believed that the money was part of the ‘donation’ and therefore merely transferred from another of his own accounts.

Yet how could the Finance Minister have thought such a thing, given he had closed down the donor account in 2013 and sent the money ‘back’?  All the transfers were a year later in 2014!

Is it not also the case that the PM has repeatedly assured the public that the so-called donation had never been used for personal or private purposes and only on behalf of UMNO, even though UMNO didn’t know he had received it?

Yet, he is now claiming that he thought this was the origin of the money that he later used for his personal accounts and credit cards in 2014!

We also note that the exact details previously reported by Sarawak Report relating to those credit cards are also now substantiated, thanks to Apandi waving the MACC document that features them at yesterday’s press conference.

Apandi’s can of worms cannot be re-sealed

These questions and many more are now rolling in from all directions in response to Najib and Apandi’s questionable excuses.  Far from putting the “distraction” of 1MDB behind him, it would seem that the Prime Minister has fallen into a classic trap of uttering  untruths which are being relentlessly undone by the facts.

‘What a tangled web we weave when first we practice to deceive”, warned the writer Walter Scott.  Malaysia’s lying politicians should have heeded the dictum and stuck to saying as little as possible!

For more coverage in the international media see below:
– The Independent – Malaysia PM Najib Razak cleared of corruption over $681m gift from Saudis – by an Attorney General he appointed
– The Independent – Malaysia concedes on PM’s payment allegations – but the excuses, and harassment, go on
– Financial Times – The Threat Najib Poses To Malaysia’s Reputation
– TIME – Dismissal of Corruption Charges Against Malaysian Prime Minister Prompts Scorn