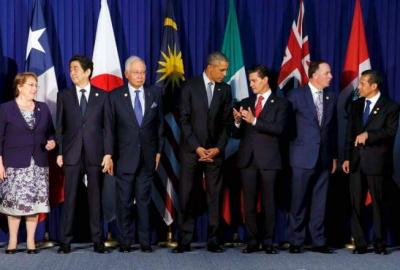 No one speaking to the guy who trousered RM2.6 bn?

Malaysia’s PM is cornered by his own corruption scandal, with the global media spotlight shining its full glare on his predicament.

First it was reported how US$700 million was siphoned from Najib’s ‘development fund’ 1MDB, through its very first joint venture deal with rookie oil firm PetroSaudi.

That money went to the company Good Star belonging to the PM’s appointed advisor and close friend Jho Low.  And it was followed by several hundred millions more into Jho’s companies (including the UBG buy out) before the joint venture closed – a total of US$1.83 billion in all, which Bank Negara have now formally requested 1MDB to return to Malaysia, owing to the false pretences under which it was ‘invested’. 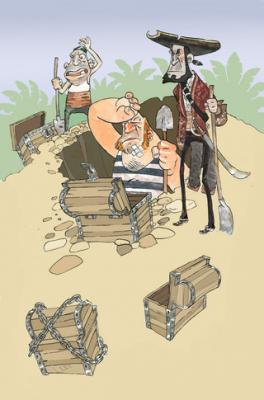 Najib and 1MDB doggedly maintain the money was never taken and was instead being held in a Cayman Island fund with profits… except that heaps of evidence has turned up to make clear that the buried treasure in the Caymans is an empty chest – all reported by the press.

Next up, more billions were reported missing from 1MDB’s subsequent ‘power purchase’ deals, involving US$6.5 billion raised in a series of bond deals with Abu Dhabi’s Aabar fund, a subsidiary of IPIC.

1MDB’s accounts record that it paid US$1.4 billion to Aabar for guaranteeing the bonds… except IPIC’s own records never show that it arrived!

Meanwhile, a whole new set of borrowing, RM4 billion from the KWAP pension fund, was also raising questions…. too many questions, the Finance Ministry clearly decided, as it hived off the company SEC from 1MDB into the Ministry’s own budget.  No one is any the wiser still about where that money has been spent.

A whole new set of evidence emerged to show that an astonishing US$681 million had meanwhile popped up in the PM’s personal account just before the election, paid in by none other than Aabar’s own Falcon Bank. 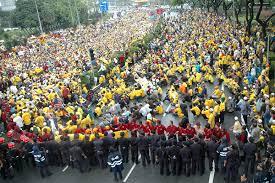 Bersih means “clean” [up the corruption]

And not only that, a further RM42 million was channelled out of that shadowy company SEC straight into another set of personal accounts belonging to the PM!

First the PM denied it all and threatened to sue those pesky foreign papers, then he admitted the reports were accurate after all, but claimed the US$681 million was an “anonymous donation” and the RM42 million was for ‘corporate social responsibility’ purposes  – OUCH!

None of these embarrassing indiscretions would have appeared in Malaysia’s own controlled media of course, but as the Prime Minister has himself ruefully observed, this is the age of the internet and 1MDB involves international money. The story’s gone global and the whole of Malaysia has heard about it too.  This summer hundreds of thousands took to the streets to signal their disgust.

Political leaders have resigned over a lot less.  But, Najib has rejected the ‘gentleman’s exit’ in the face of such loss of confidence. He perhaps fears he will lose the power to protect himself from punishment for these outrageous transgressions…. and perhaps worse, since this is a Prime Minister who is also entangled in a notorious murder cover up and other 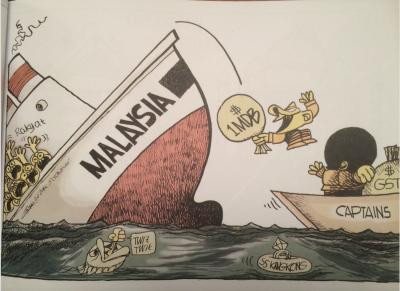 Zunar faces half a century in jail for cartoons and tweets like this..

questionable perversions of the law.

So, like a cornered rat, this once self-proclaimed reformer has started lashing out, imprisoning, sacking, harassing, bribing, bullying and silencing people who threaten him further. Najib, his wife and their diminishing circle of newly promoted henchmen are using their claws and teeth at anyone who dares even speak out about the situation.

Victims include peaceful protestors by the hundred, former colleagues, civil servants, activists, lawyers, academics, writers, cartoonists (like Zunar featured above), a former Prime Minister and the 15 year old son of an opposition state leader – let them all feel the raw revenge of this wounded PM, who after all has seen no shame in imprisoning an opposition leader whom he could not beat in a fair election fight.

The US NGO Human Rights Watch has led the way in deploring Najib’s sudden lurch towards dictatorship – the man who came to power saying he would abolish the outdated sedition laws has instead just increased its penalties and he has added a panoply of further newly concocted catch-all crimes to whack anyone who so much opens their mouth to criticise corruption.

Criticise Najib? You can expect a charge of “Activities Detrimental To Parliamentary Democracy” (20 years in jail); Complain that the imprisonment of the opposition leader was a travesty of justice? Expect a charge of “Sedition” (Zunar faces 43 years in total); Report 1MDB to foreign law enforcers? Expect a charge of “Sabotaging the Economy” (unlimited jail under the new bonkers SOSMA ‘anti-terror’ nonsense).

If Najib has his way and imprisons the scores of people who are now facing trial for such ‘crimes’, then all Malaysia’s remaining freedoms and civilised procedures will have been sacrificed to save its one cornered rat PM.

Meanwhile, the violent and racist menace of the Malay Muslim supremacist movement is being given finance and free rein by Najib and his bloated PM’s department (7% of the total budget is now placed at his own disposal).

These Red Shirt thugs have added lawless street enforcement to Najib’s legal persecution of his enemies.  The paid gangs are also the biggest incitement to Malaysia’s growing extremism problem, leading to terror threats. 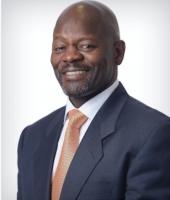 Frank White set up DuSable shortly before the 1MDB contract in 2013 and then took US$505,000 to consult on a solar power project

What happened to that nice Mr Najib, the ‘moderate Muslim leader’ and his golf pal from Hawaii, President Obama will doubtless be asking aides as he flies into all this on Friday?

Last week, questioning finally disclosed that Frank’s firm DuSable Capital Management made a US$69 million profit for its fund Yurus from selling out its shares in yet another fleeting joint venture involving 1MDB – a venture that never got beyond plans scribbled on the back of an envelope according to all the evidence.

The records also show that Frank had been paid further enormous sums to lobby US Government support for a Malaysian solar panel project. Why?

A goodly chunk of that US$505,000 fee went into a series of Democrat campaigns last year, which is embarrassing and possibly contravenes the laws on foreign funding.

So will Obama extend a hand of rescue to this beleaguered progressive turned tyrant, for which Najib has paid so much to lobbyists like White?

There is plenty America would like from Najib, but is a Democrat President prepared to pay the price of turning a blind eye to the fact that this Prime Minister appealed against a High Court acquittal of the case he himself had constructed against the opposition leader?

Will he ignore the fact that the man who won the most votes in Malaysia’s last election is therefore now in jail for a protracted sentence on the gay-bashing charge of ‘sodomy’ – and that scores of other legitimate opposition figures are on their way to join him there?

Or will he slap this Najib with a public admonition?  The now ‘lame duck’ President should tell this dead duck Prime Minister to put his country first.