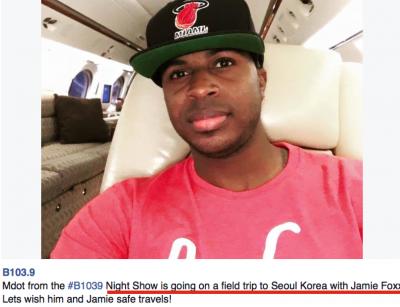 Party guest – Jamie Foxx is meant to be sworn to secrecy, but here is the give away as he flies by private jet, courtesy of friend Jho, to South Korea with a gushing Night Show team in tow

One of the world’s largest super-yachts, Equanimity, sneaked out of the harbour of Incheon, South Korea just after 5pm this Friday evening, marking the start of Jho Low’s latest multi-million dollar party bash, which is scheduled to carry on off-shore for the rest of the night.

On board, a crowd of pampered guests preparing for a night of entertainment courtesy of the fugitive Malaysian billionaire.

It proves that the yacht, which he has always denied belongs to him, was nevertheless at his disposal to bring over from the other side of the world to host this latest ostentatious, money-without-object, extravaganza.

Sarawak Report had received early notification that Jho Low was scouting his usual Hollywood contacts to find out whom he could hire to attend this latest gala – once again to celebrate his own birthday earlier in November. 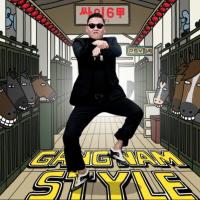 Paid guests are believed to include Psy

He is believed to have paid for no less than 24 ‘celebrity guests’ to attend on this occasion, including two Grammy Award winners and two Oscar winners.

Local Korean star Psy, whom Jho paid to attend BN’s ill-starred Penang election rally, is believed to also be on the list.

However, Low’s prime erstwhile party pal, Leonardo di Caprio, is suspected not to be attending this time. Relations between the two self-proclaimed environmentalists and avowed philanthropists are believed to have cooled, perhaps as the questions over the origins of Jho Low’s billions have become more pressing and public.

However, another Jho Low party regular on the guest list, Jamie Foxx, has indeed been placed in the past few hours heading ever so coincidentally into South Korea (by luxury private jet of course) as recorded by the gushing tweets from the radio team he has brought in tow. 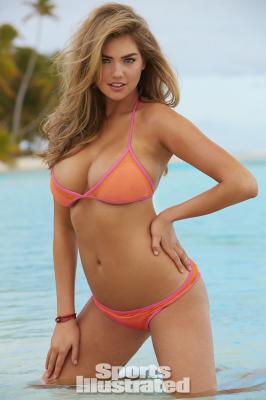 A 20 meter pool and vast 91 meter deck ought to give the likes of Ms Upton full scope to display her attractions and will provide the stage for the latest of Jho Low’s world record beating lavish parties.

By nightfall Equanimity was safely off the Korean coast, according to our monitoring, and presumably ready to receive the host, billionaire Jho Low himself, who is expected to land by helicopter from the anti-extradition fortress of Taiwan.

Equanimity is one of the few private yachts in the world built with a special re-enforced helicopter landing deck to facilitate his arrival.  The luxury boat also has its own gym, spa, Turkish bath, beauty salon and ‘beach club’. 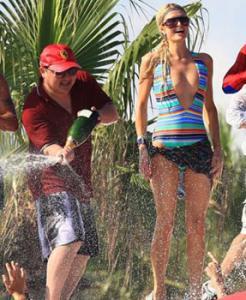 Repeat behaviour – Jho Low on previous form with Paris Hilton in San Tropez, before he went to ground in Taiwan.

It goes without saying that as the party gets underway the decks will be awash with Jho Low’s signature Crystal Champagne, expensive entertainments, pyrotechnics and the most lavish international food, served by an army of ‘themed’ staff.

As was the case with Jho Low’s previous extravaganza’s (which are frequently timed to celebrate his own birthdays) this event has been prepared over the past few months under conditions of utmost secrecy.

Guests have been required to sign confidentiality agreements; not to disclose their invitations to the party and in some cases the chosen guests have not even been given the identity of their ‘mystery host’, who has been merely described as a youthful billionaire from Asia.  Photos and tweets and all interviews on the party are naturally also banned.

One person who learnt about the plans spoke to Sarawak Report:

‘It’s like something out of James Bond.  Who holds a super-extravagant party like that in total secret in the middle of the ocean?”

The answer is Jho Low, who plainly cannot resist spending more of the billions diverted out of Malaysia’s development fund 1MDB into his accounts on his own enjoyment, but dare not let the world find out (let alone turn up to parties in New York, where his actions are being investigated). 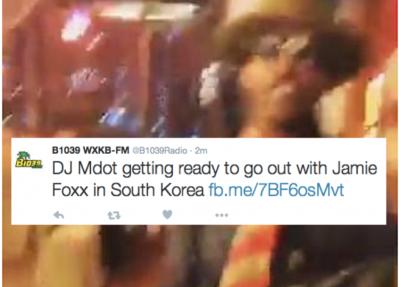 The DJ travels in with Jamie Foxx

Further details leaked from the event show that once again the thirty six year old has attempted to cloak his selfish expenditures with his new self-proclaimed banner of ‘philanthropy’.  He is rewarding guests with a gift of US$50,000 to spend on a UN charity of their choice and is believed to be describing this as a form of fundraiser.

This is consistent with the fact that Low has thrown money at the UN and other US establishment bodies in recent months in a clear attempt to buy good will.

Fellow Malaysians will note there has been no such conspicuous charitable spending back home, from where billions of his dollars were obtained through the diversion of funds from 1MDB. 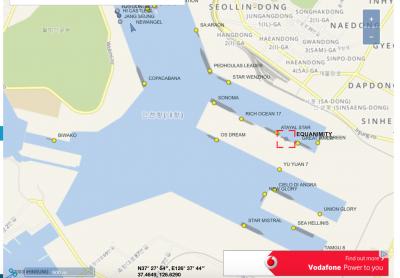 Loading up with champagne and fireworks? Equanimity has been moored at Incheon since the start of the week

Tonight’s event also finally puts to bed months of denials by Jho Low over the widespread rumours that he is indeed the owner of Equanimity, the world’s 39th largest sea-going yacht, which was delivered to a ‘secret Chinese client’ by the Dutch boat builder Oceacno last year.

Sarawak Report learnt of the planned yacht party off South Korea some weeks ago and started tracking the movements of this monster boat.  Sure enough, Equanimity has been heading over from the West Coast of the United States in a bee line for South Korea ever since late summer. 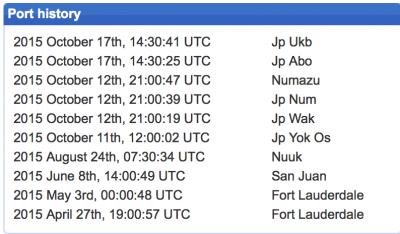 Equanimity’s key stops in past months

It ended, up spot on time, in Incheon just at the start of this week in order to get ready for the planned extravaganza for Jho Low.

Most remarkable has been the extraordinary route taken by the vessel in order to reach South Korea from the East Coast of the United States.

Avoiding the normal Panama Canal it instead headed north up the Atlantic Coast from its base in Fort Lauderdale in Florida in May right up to the Arctic over the mid-summer months.

Equanimity then cut straight over the North Pole, through the fabled Northwest Passage and the normally frozen Arctic Sea, past Greenland and Alaska and into the North Pacific. 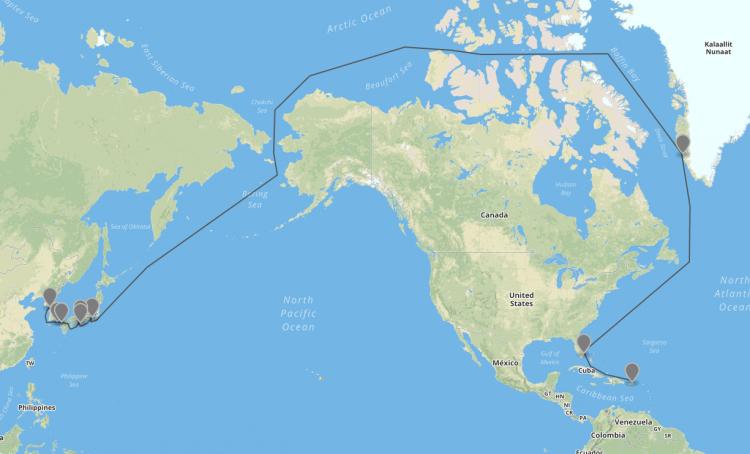 The startling route made it only the 200th ever vessel to ever complete this dangerous voyage through a sea that has only become genuinely passable over the past two years, thanks to the shrinking of the Arctic Ice, caused by global warming. 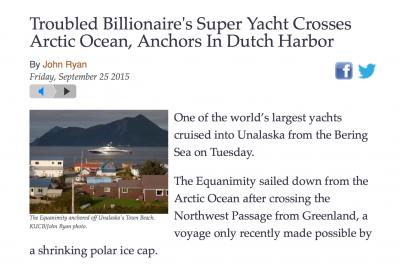 Exiting the Bering Sea at Unalaska

The arrival of this vast fancy yacht with a mystery owner certainly attracted attention with the local media as it moored off Dutch Harbour in Unalaska in September.

Local papers had no hesitation in naming “troubled billionaire” Jho Low as the owner of it.

Writers observed how until 2006 this route was almost permanently frozen against shipping and extremely dangerous.  Four ships passed through that year in 2013 the number increased only to 18 .  The fast shrinking ice-cap has been caused not least by the rampant deforestation that has been causing months of haze over Borneo and warming the earth’s surface with CO2 and other gases caused by burning trees, peat and fossil fuels. 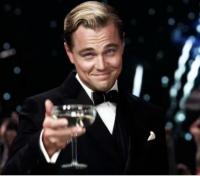 Will Leo come this time?

We hope Jho Low considers it worth the melting of the earth’s ice caps so that his ship can make his birthday party in time, especially considering how he and his best friend and party pal Leonardo di Caprio both pose as fervent environmentalists and eco-campaigners.

Equanimity, which is said to be decorated in bamboo and gold ‘in accordance with its owner’s Chinese origins’, has in the last few weeks proceeded South down past the China coast and into the Japan Sea, where it motored gently through, visiting various ports, including Hiroshima last week.

Last weekend it finally emerged from the Japan Sea and cut through the Yellow Sea to South Korea, as amused watchers had long anticipated it would, in order to make its final path to its destination – Jho Low’s party.

Guests have been arriving, first class travel paid of course, by air from the world over.  However, the secret is out. We trust it didn’t spoil the party or prevent the secretive Mr Jho Low from turning up after all! 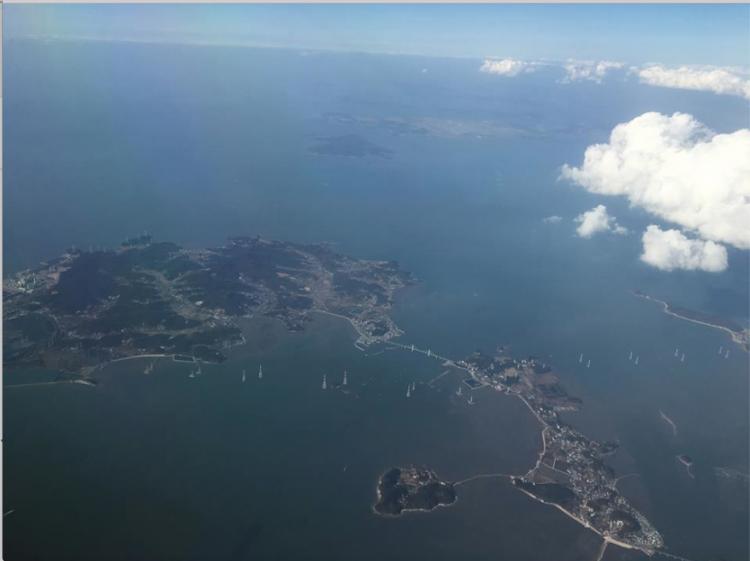 Jamie Foxx’s view from the plane as he heads in to South Korea to meet up with Jho Low’s yacht to spend more of money raised in the name of Malaysia’s poorest people.