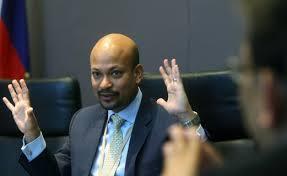 Who is lying? 1MDB and Arul Kanda or the rest of the world?

Further documents from the Auditor General’s interim report on 1MDB have been acquired by the UK newspaper the Financial Times, the paper has revealed.

They confirm the long standing suspicion that 1MDB’s previous auditors KPMG were not satisfied with the story of the so-called Cayman Island fund and were refusing to sign off the 2012-13 accounts until they had more proof.

According the the FT’s latest story, published Friday, the Auditor General reveals that KPMG were demanding evidence that there was genuine value in the supposed Bridge Partners investment fund, which 1MDB management failed to provide for several months.

Finally, with the accounts astonishingly overdue by nearly a year, Najib sacked KPMG and hired Deloitte, who eventually produced belated accounts, while noting they could not be held responsible for the previous period.

Despite this evidence in the Auditor General’s report, 1MDB’s current CEO Arul Kanda is nevertheless continuing to claim the Cayman Island fund contained US$2.3 billion, allegedly made from the original joint venture deal with PetroSaudi.

The FT reports that the doubts over the existence of this fund in the Caymans lies at the centre of Najib’s credibility issues over 1MDB:

At the heart of the tangled web of global dealings lies a seemingly simple query: what is the story of the more than $2.3bn said to have been held in the Cayman Islands on behalf of 1MDB, the troubled Malaysian government-owned company?  A new Australian court case and documents compiled by Malaysia’s auditor-general raise questions about why the Caribbean investment was set up, how it was run — and what the holdings in it were actually worth….

The 1MDB Cayman story began in the fund’s early days, when it agreed a joint venture with PetroSaudi, an energy company. That tie-up — a contentious episode in itself — ended in 2012 after a complex chain of deals, according to a section of a draft report by Malaysia’s auditor-general completed in June and seen by the Financial Times.

1MDB said it sold equity and debt interests linked to the PetroSaudi venture to a company called Bridge Partners International Investment, generating $2.32bn of proceeds, according to the auditor-general’s report. The proceeds were in the form of promissory notes — or IOUs. 1MDB used these to buy, via a subsidiary known as Brazen Sky, portfolio investments in a Cayman-registered vehicle called Bridge Global Absolute Return Fund SPC. Bridge Global had been incorporated just a month earlier, in August 2012.

An early alarm about the Cayman dealings came from KPMG, 1MDB’s auditor, according to the auditor-general’s draft report. The accounting firm was unhappy because 1MDB would not give it documents it wanted to help it assess the ownership of the investments, their value and Bridge Global’s financial standing. On New Year’s Eve 2013, 1MDB sacked KPMG as its auditor — having cut loose Ernst & Young over another dispute three years earlier. The fund’s 2012-13 accounts were finally signed off by Deloitte instead.

The detail of the respected news journal’s lengthy article entitled “Caribbean dealings stalk Malaysia’s 1MDB” spells out the shady and unorthodox nature of this dodgy fund, which was adopted by the Malaysian Government as an investment vehicle for this huge sum of money.

The fund managers themselves are now embroiled in an Australian court case, having been prosecuted by the authorities there over related matters.

The central point is clear. Had 1MDB genuinely been able to sell off its so-called interest in PetroSaudi for a healthy US$2.3 billion then it could have invested this hard cash publicly in all manner of safe, respectable and profitable funds anywhere in the world.

However, the Minister of Finance instead chose to put the entire portfolio into the hands of a shady subsidiary of a little known outfit, which had just opened shop in the dodgy Cayman Islands just a month before.

There is only one reason for investing through the Cayman Islands and that is secrecy. 1MDB was claiming whatever it liked about the contents of this fund, but no one could prove it.

Certainly, 1MDB’s own auditors could not prove it and the FT have now confirmed that to their credit they were refusing to sign off the accounts until 1MDB provided solid evidence there was really money (or equivalent value) in this fund.

1MDB never did provide that proof and yet Arul Kanda says he is not lying, everyone else is.

The evidence from Malaysia’s own respected Auditor General’s own report, adds to that of the other remaining institutions which command some trust and independence in the country, including the Bank Negara and the doughtier corners of the MACC.

These have all supplied evidence, compiled by the previous Attorney General before Najib unconstitutionally booted him from office, to confirm the information provided by PetroSaudi’s databases, which shows that in fact all the money from the original investment had been stolen.

We know that of the US$1.83 billion invested by 1MDB in PetroSaudi, the vast majority (almost US$1.4 billion) was diverted into Jho Low’s company Good Star and the buy out of UBG, the company owned by himself and Taib Mahmud.

The rest went into paying off PetroSaudi and buying that company a drill boat, which enabled it to establish itself for the first time as a genuine oil company, obtaining a lucrative concession off Venezuela.

So, what was there left to sell off when 1MDB finally announced that it was going to sever its ties with this so-called joint venture partner and ‘cash in’ its investment?

Who was going to seriously pay US$2.3 billion for thin air?

Enter Bridge Partners, whose identities, Malaysians should remember, were kept a mysterious and deadly secret for many months by 1MDB, until finally the information leaked out.

When questioned, the Finance Minister and company would only say that this so-called US$2.3 billion of public money was being managed by a “licensed institution” in the Cayman Islands.

The shocking reality, as it has now emerged, was that even this was not true. The Bridge Global Fund did not in fact acquire the requisite licence until a year after the Malaysian billions were invested in it (in November 2013).

At least the public can console itself that there wasn’t in fact any genuine money being risked in this fashion, because it long since been stolen.

So, the blatant scenario, now confirmed by the Auditor General’s own interim report is that, in order to shut down speculation about the billions missing from this joint venture, Najib/ Jho Low had rustled up this dodgy outfit to claim that it was buying 1MDB’s ‘investment’ for US$2.3 billion (boasting a fictional profit).

Except, because there was no money, 1MDB immediately ‘invested’ everything back into the buyer’s own fund – a fund which openly described itself as extremely high risk where people could lose 100% of their money – how convenient.

Of course, no actual cash had ever exchanged hands at any stage of the transaction. Bridge Partners was far too poky an outfit to be able to shell out US$2.3 billion in hard currency and this was all a matter of swapping so-called ‘promissary notes’ and units back and forth, which could mean anything and nothing. These were third rate junk assets in return for Malaysia’s billions in hard cash borrowed three years earlier.

These were the self-same “units” which ended up in the bank at BSI Singapore, of course.  The Bank also reported to the authorities that Arul Kanda was lying when he said there was “cash” in 1MDB’s Brazen Sky account in their bank.

So, are the Auditor General, Financial Times, KPMG, Bank Negara, former Attorney General, BSI Bank, 1MDB Board minutes, PetroSaudi database and just about every other available source of evidence you care to mention retailing a pack of lies – or is the liar Arul Kanda and his team at 1MDB?