JVA Was Signed Behind Our Backs – 1MDB Board Fury Further Explained!

IMDB’s management was only authorised to “proceed with negotiations” for what was still described merely as a “proposed venture” by their Board of Directors, at a meeting just two days before the Joint Venture Agreement with PetroSaudi was actually signed!

The information comes from further minutes obtained by Sarawak Report, this time of a Special meeting of the Board of Directors held on 26th September 2009.

The records of this board meeting make clear that Directors considered that there were numerous detailed due diligence checks still outstanding on the joint venture, including a proper valuation of PetroSaudi’s assets, before they could move to completion.

It was agreed, therefore, that Management could proceed with negotiations, but needed to abide by recommendations, comments and amendments made by the Board, which included commissioning an independent valuation of 1MDB.

The only possible conclusion, therefore, is that the deal was signed two days later on 28th September behind the backs of 1MDB’s very own Board of Directors, whose instructions about how to proceed with the negotiations were simply ignored! 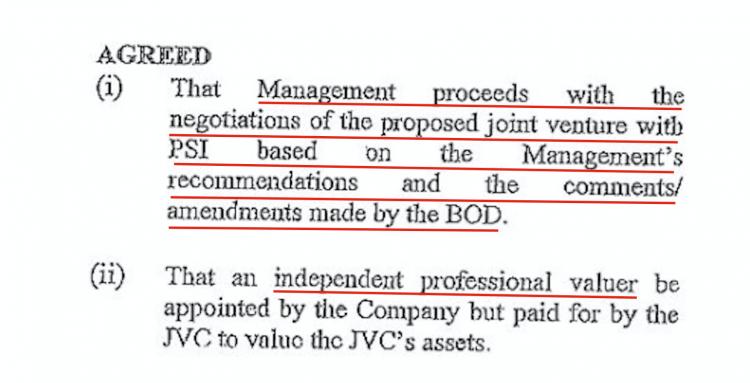 1MDB management were merely authorised to continue to negotiate and were ordered to abide by the recommendations and amendments proposed by the Board, including commissioning an independent valuation of PetroSaudi – yet two days later the deal was signed without the valuation!

That they had not authorised the signing of the Joint Venture Agreement explains even more clearly the fury expressed at the October 3rd emergency meeting of the Board, held just a week later, when Directors had not expected to meet again before October 9th.

At this meeting, on which we have already reported, the Directors expressed outrage that the deal had in fact been signed, when plainly none of the steps they had requested had been carried out.

The October 3rd minutes revealed that Directors had considered a realistic time line for the deal to be concluded was by March 2010, certainly not two days after they had commissioned key information checks about their proposed joint venture partner.

There was, of course, further concern expressed during the October 3rd meeting because by then it had emerged that US$700 million of 1MDB’s billion dollar investment had been diverted into an unauthorised account outside of the JV partnership, controlled by the Prime Minister’s agent Jho Low.

Board Members demanded to find out if the clearly misappropriated money could be brought back, given they had never sanctioned the deal in the first place!

The direct oversight and involvement of the Prime Minister’s Office over this entire joint venture operation is also plain from the records (above). Najib may have posed merely as the Chairman of a Board of Advisors to 1MDB, but in reality he was the sole shareholder and the only individual able to sign off on investment decisions.

The fact that the Prime Minister was preparing to make an announcement on the completion of the deal, rather than its progress, had clearly not dawned on the Directors on 26th September.

What’s more, the 26th September minutes make clear that at this date the Directors were still labouring under the false impression that the proposed joint venture was a “Government to Government” initiative, thanks to misleading information provided by the managers of 1MDB and PetroSaudi and the tone of the Prime Minister’s Office’s own pronouncements, which indicated the deal related to a new age of partnership between Malaysia and Saudi Arabia involving the investment of surplus Arab cash.

This directly influenced the Board’s willingness to waive certain normal business provisions and it further confirms the shocking level of deceit perpetrated by the company’s managers, including the then Chief Executive Shahrol Halmi, now himself on the 1MDB Board. 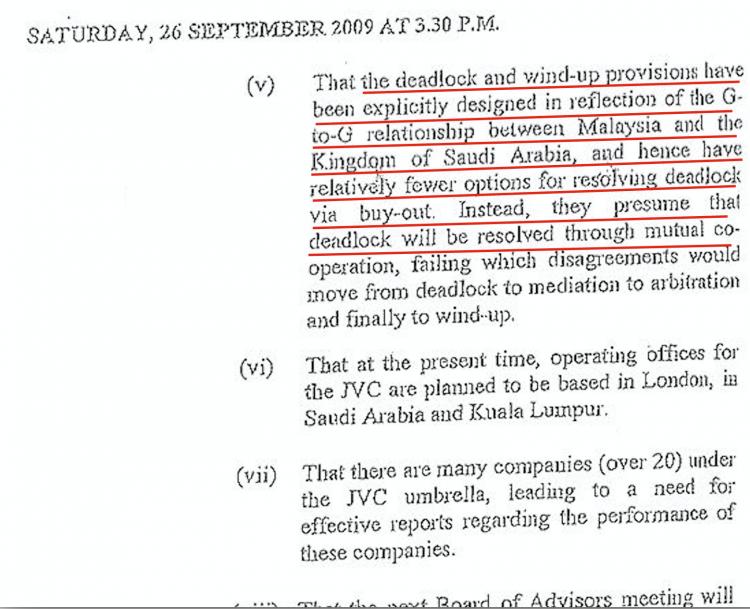 The Joint Venture was drawn up to waive normal wind-up and dispute procedures, on the basis that this was a Government to Government venture and matters would be handled politically

Earlier, on 18th September 1MDB’s Executive Director, Casey Tan, had told Board Members that PetroSaudi was “ultimately owned by King Abdullah” and was an arm of the Saudi State. Tan has now fled Malaysia where he is wanted for questioning by Bank Negara.

However, any glance at the company’s incorporation documents, audits or online information would have alerted 1MDB management and their lawyers from Wong & Partners, that this was not the case. In fact PetroSaudi was a small private company with limited paid up capital and few active concerns, owned by Tarek Obaid and Prince Turki/Terky bin Abdullah. 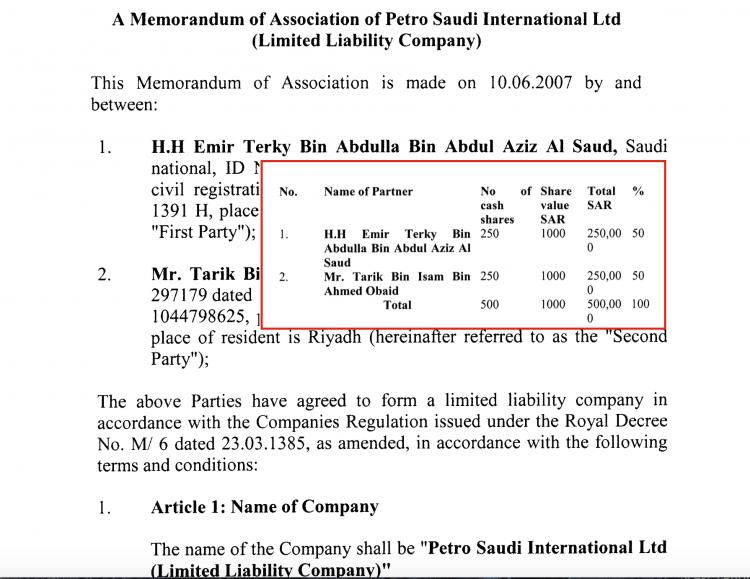 The shareholders were two private individuals

Yet the minutes of 28th September show that key decisions leading up to the joint venture were still be made under this false impression that PetroSaudi represented the Government of Saudi Arabia.

The belief caused the Board to minimise provisions for protecting the company, on the basis that disputes would be “arbitrated” on a government to government (“G-to-G”) basis rather than through normal civil legal channels.

In particular, so-called deadlock and wind-up provisions in case of dispute were deliberately drawn up with “fewer options” for 1MDB on the basis of this non-existent “G to G” relationship!

A later section of the minutes reiterates the plain misunderstanding that had been deliberately promoted:

Only the Malaysian Government had an interest, unknown to the Board!

The minutes also record (section vii above) that Directors were also falsely informed that PetroSaudi was bringing “over 20” companies under the Joint Venture Company’s “umbrella”.

In fact, PetroSaudi had one minor investment in Argentina, using borrowed cash and had merely opened up a couple of shell companies off-shore in the past days. 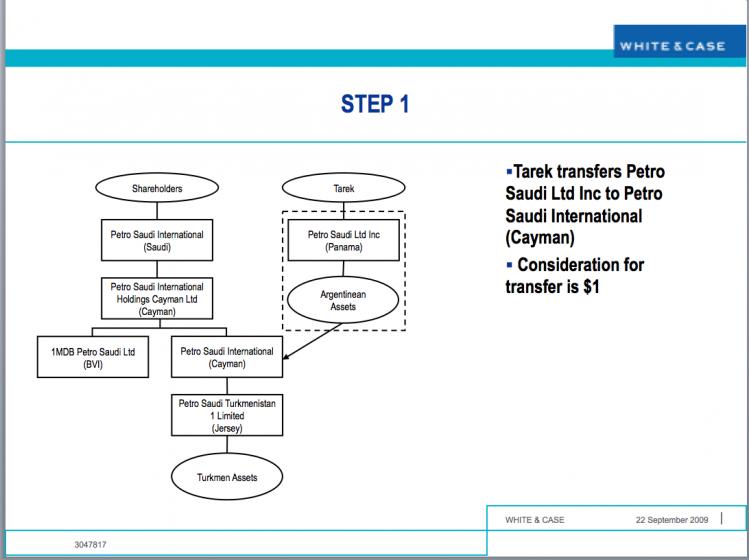 A web of holding companies with few genuine assets

In the light of this misinformation that there would be 20 companies under the JV umbrella the Board sensibly resolved on 26th September that there needed to be “effective reports regarding the performance of these companies” before a decision was made.

The deliberation underscores the message that the Board of Directors had no intention of signing off on the Joint Venture and authorising the US$1 billion proposed investment just two days hence.  They wanted a thorough examination of the company that would take several months.

Indeed the Directors made a specific requirement at this 26th September meeting that an independent valuation of PetroSaudi should be commissioned from an expert appointed by 1MDB (which is described in the minutes as The Company).

Instead PetroSaudi itself had hired the valuer Ed Morse, a contact of their own directors Tarek Obaid and Patrick Mahony, to produce a report that was drawn up in two days based on information supplied by PetroSaudi.

As already known from the October 3rd Board Minutes published previously, the Directors were equally furious and alarmed at this self interested and hasty report delivered after the deal was signed and demanded a further valuation immediately.

Why the 1MDB PetroSaudi schemers could not afford delays 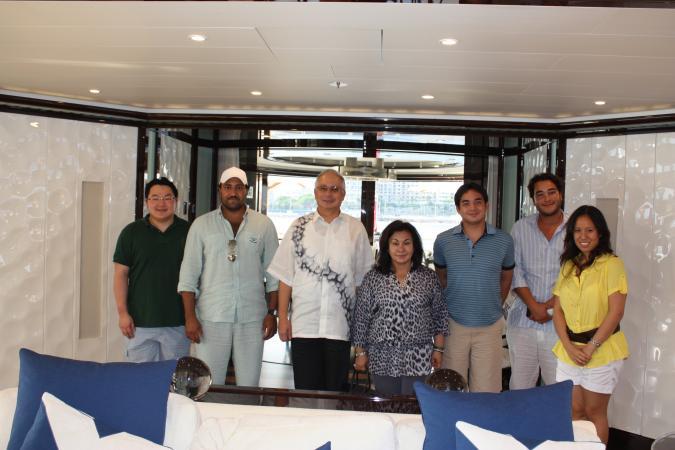 The real people behind the PetroSaudi deal – (from left) Jho Low, Prince Turki, Najib, Rosmah and Tarek Obaid – on the occasion they hatched the plan in August 2009 on a hired yacht off the South of France

It is clear why the recommendations and requirements of the Directors made at the September 26th Board Meeting were ignored by those who were orchestrating events and anxious to get US$700 million paid as soon as possible into Jho Low’s Good Star Swiss bank account.

Because, if any of the proper checks required by the board had been carried out, the joint venture could never have gone ahead.

PetroSaudi would have been revealed as a two bit company and its temporary option on a so-called Farmin deal for a Turkmenistan oil field (due to run out in early October) would have long-since expired, meaning it could no longer pretend to an “interest”, which was being projected as an ownership.

Would the likes of Shahrol and Casey have dared defy their bosses on the Board unless thus instructed through the agency of the official ‘Advisor’ Jho Low, who has already been demonstrated through documents released from the PetroSaudi database as the person actively managing the deal?

Sarawak Report contends that the wealth of evidence now obtained surrounding this venture points to one conclusion only, which was that the sole objective was to divert public money, borrowed on behalf of Malaysian development, into the private bank account of Jho Taek Low and from thence to places which can be explained by the Central Banks of Switzerland, Singapore and elsewhere.