It's Not About A "White", "Foreign" Woman, Mr Prime Minister 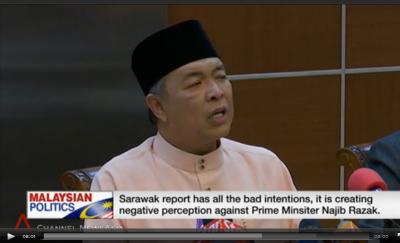 Having, sacked, replaced and arrested numerous of his own colleagues, citizens and public servants over the past few days the Prime Minister of Malaysia has elevated one foreign female blogger to the status of prime threat to the nation.

How can this possibly be?

And has this Prime Minister now shown his true colours by falling back on race and religion in this manner – attacking a fellow born Malaysian, who was also sent to be educated (like him) in the UK?

And while he chooses to attack this blog, purely for being “white” and “foreign” he has shown no such concerns about hiring at vast expense the UK “white” national Paul Stadlen and his “white” colleague, who were the writers of the Government press release announcing Najib’s ‘reshuffle’ last week.

Stadlen originally served Najib as the head of the US/Israeli PR company APCO – so why this sudden racist hypocrisy against “white foreigners”? 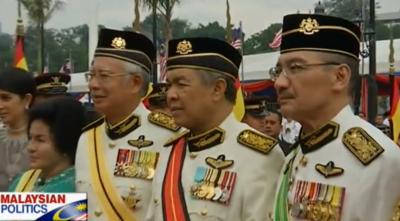 All in the family – “new Cabinet” line up…

The issue at hand is the investigation of grand scale corruption and theft of public money through the development fund 1MDB.

It is also the matter of related public money going into the account of the Prime Minister.

And, of course, the use of such monies to assist in illegally influencing the outcome of a democratic election.

Sarawak Report has been one of numerous publications to investigate and report on the issue, why does this make us the “enemy of the state” as opposed to those who are thieving from it?

Why are we to be accused of seeking to “topple a democratically elected government” as opposed to those who illegally sought to cheat the electorate of Malaysia by using foreign borrowed funds to sway the election? 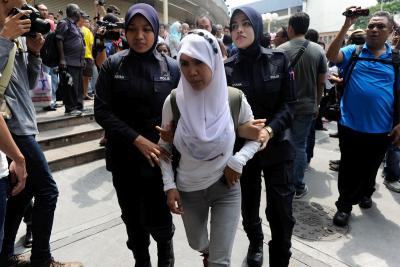 Another dangerous woman? Arrested today for attempting to protest at corruption in KL

And is it not awfully demeaning to Malaysia to suggest that a few articles, written by one foreign white woman could seriously undermine the power and authority of the state?

What has really undermined Malaysia and is now threatening to “topple” things is the canker of unrestrained corruption, which has eaten away at this government’s moral authority from within.

This is a Prime Minister, who has today proclaimed “I value loyal people over smart people” – what a disgraceful admission from the man whose duty it is to Malaysians to make sure their public servants are of the highest quality.

Najib has just cynically and openly admitted that his only real criteria is to appoint people who will worry protecting about him, not the rest of Malaysia. 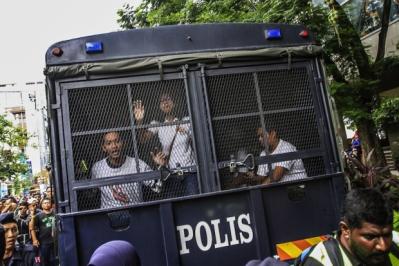 That’s the way we do it?  These protestors have been so far denied their legal rights to representation

Is this why a blog that is more fearless because it is protected by the rules of law and press freedom in another country is considered so dangerous to Najib?

Is it because he cannot bully us like the many other politicians, journalists, senior civil servants and members of the public in his own country, many of whom he has started rounding up this week and throwing into cells, just for raising the issue of stolen billions from 1MDB?

Does it not show Najib himself up for his own insufferable weakness that he, the head of a sovereign government with his hands on all the levers of power, should resort to no better excuse than making such ridiculous accusations against one white woman, who lives thousands of miles away and who has not a single shred of direct influence in his country?

How is it that Sarawak Report is a danger to the state of Malaysia – is it not he himself that has produced that danger by mismanaging himself into this humiliating situation?

Perhaps the most despicable abuse of power available to the Prime Minister in the present corrupted state of affairs in Malaysia is the usurpation of the religious duties of Islam, by the creation of a unit in the Prime Minister’s own office – the so-called Islamic Development Department, JAKIM 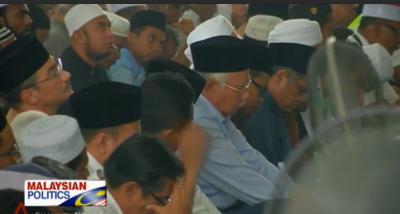 Intruding into the role of religion?

The sermons on whom all people rely for their moral guidance have been utterly politicised in Malaysia by JAKIM, which now supervises these weekly messages to be read in every mosque in Malaysia.

By this means the secular Prime Minister has hijacked the role of the teachers and religious leaders of the leading faith in the country.

And this Friday he abused that power to direct all the mosques in the country to teach their trusting congregations to blame “foreign powers” for supposedly “insulting” Malaysia and its leaders.

Any Muslim who raised the issue of 1MDB, JAKIM lectured, would be making themselves “victims of foreign powers”, reported Singapore’s Channel News Asia last night.

Sarawak Report sees such tactics as a direct attempt by the Prime Minister to whip up unfounded religious feeling against innocent parties such as itself, purely because the Prime Minister has found himself unable to counter us by any of the legal methods that would have been available to him if our reports had been in any way untrue. 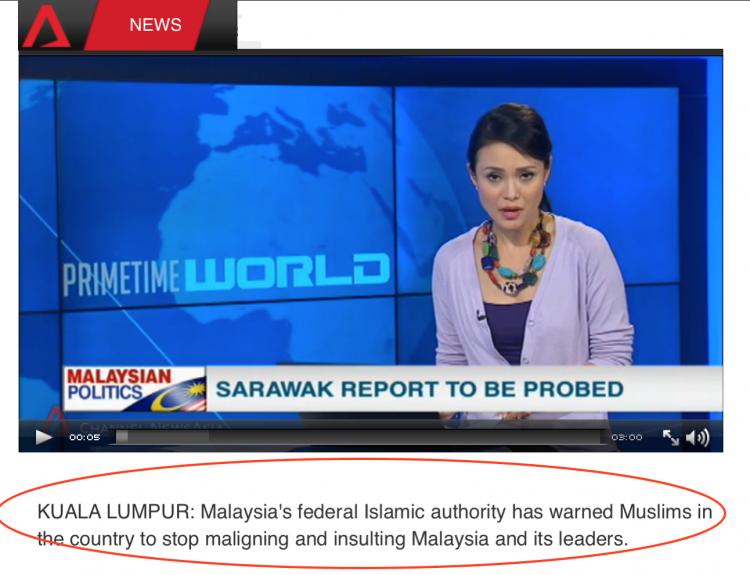 Instead of suing us he has sermonised us and we believe such deeply irresponsible tactics have placed Sarawak Report in personal danger from people, who have been cynically and deliberately mislead.

Islam rightfully denounces theft, deceit and perversions of justice and it does not take a “white foreign” woman to put such perpetrators in hot water in terms of morality and the law in Malaysia.

These are the issues being examined by the forces of law and order today in Malaysia.

The fact that Najib seems forced to respond by arresting, sacking and replacing everyone, who has been looking into these matters as part of their public duties cannot be laid at the door of Sarawak Report.