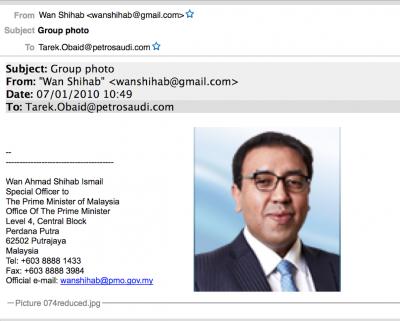 This is the photo shoot that tells it all about 1MDB’s PetroSaudi deal.

Ranged together and grinning broadly to camera, as they enjoy a summer holiday in the South of France on the luxury yacht Tattoosh (rented for $500,000 a week) are all the main players behind the joint venture.

From left to right are Jho Low, the mastermind of the joint venture; Prince Turki, the owner of PetroSaudi; Prime Minister Najib Razak, the man in sole charge of 1MDB; his all powerful wife Rosmah Mansor; Nor Ashman, the couple’s son; Tarek Obaid, the Director of PetrSaudi and Rosmah’s favoured daughter, Nooryana Najwa.

The picture was sent as a memento of the happy gathering by Wan Shihab, a special officer to Najib, to Tarek Obaid and Jho Low and (according to the data on the photo) it was taken during August 2009 as the plot to set up the joint venture was hatched. 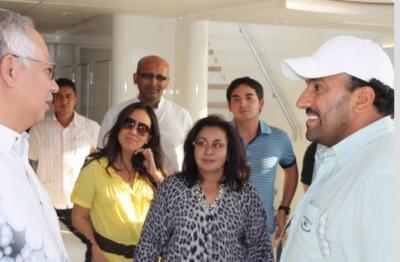 Wow! up on deck on one of the world’s most enormous yachts!

It is one of a portfolio of pictures circulated round Jho Low, Prince Turki and Tarek Obaid in January the following year, thanks to the good offices of the Prime Minister’s aide after requests had been made in various emails.

It was only three weeks after this yachting liaison that Tarek Obaid’s fellow Director at PetroSaudi, the British businessman Patrick Mahony, was over in New York to meet up with Jho Low and put the whole plan into effect with lightening speed.

By September 29th 2009 a billion dollars of borrowed public money had been wired over from 1MDB (sole signatory Najib Razak) supposedly to fund an oil exploration venture by the joint subsidiary 1MDB PetroSaudi. 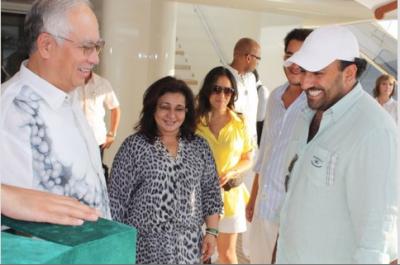 However, the terms of the joint venture agreement allowed for US$700 million of that investment to be siphoned off in the guise of a loan repayment to the PetroSaudi International (Cayman) parent company.

That enormous sum in fact went into the Zurich account of Good Star Limited, which was another Cayman registered company controlled by Jho Low.

Throughout this deal, as a trove of email and documentary evidence now passed on to international investigators prove, Jho Low acted as the point man between Prime Minister Najib Razak and PetroSaudi.

Please can you send some pics?

Spoof that conned the Prime Minister too! 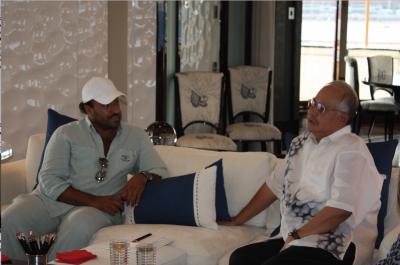 Malaysian PM thought Tatoosh was Prince Turki’s yacht, but it was only a rental to impress

Sarawak Report has learnt from insiders that the irony of this event that hatched the first deal for 1MDB is that the Prime Minister and his wife were being gulled by Jho Low about the Arabs who owned PetroSaudi.

The Malaysian couple had been led to believe that the vast yacht Tatoosh, which had been rented for the occasion to impress, was actually owned by Prince Turki, who was the owner of PetroSaudi.

In fact PetroSaudi had few funds and Prince Turki, while a 7th son of the then King was no multi-billionaire in his own right. 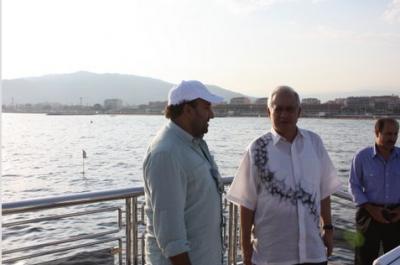 Off the South of France

Jho Low and his business colleagues wanted the Prime Minister to think that he was investing in a major enterprise owned by a player in Saudi, linked to the Royal family, so the deal could be presented as backed by the State of Saudi Arabia.

In fact, it was all pretty much a sham.  But, it did the job and soon after the Malaysian development fund, which was completely controlled by Najib, invested hundreds of millions in the company’s new venture in Venezuela. 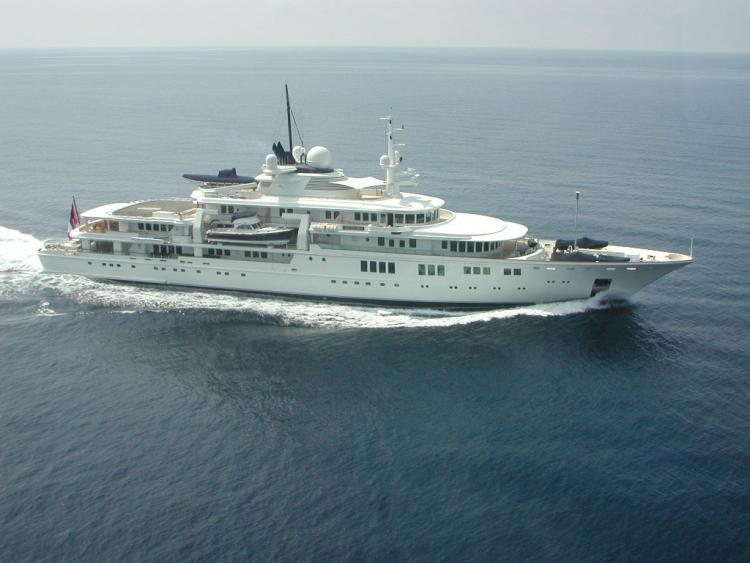