Everything To Hide - Najib Bottles Out Of 'Tell All Session' on 1MDB! 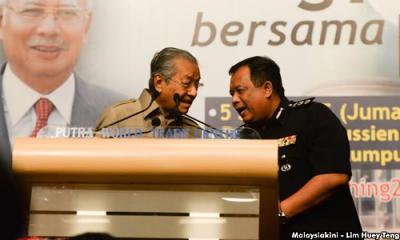 Who ever imagined Malaysia would see the transformation of Dr Mahathir into the ‘Hero of the Resistance’, dragged down from the popular podium this morning on the orders of the Chief of Police?

Politics in Malaysia has become a riveting drama in recent weeks, with the unfolding story of 1MDB played like a daily soap opera on the internet news sites.

And everyone is asking can the Prime Minister really live down a scandal of this magnitude, merely by deploying his excessive executive powers and without attempting to win the argument or to justify his tarnished position?

If so, then all pretence of democracy and the rule of law must be cast to one side.

Malaysia  will have been Birkin Bagged into submission and the UMNO leadership will be revealed as bought and paid for – not equals but underlings of the all powerful wife of the PM, who is now universally regarded as the real driver of current events. 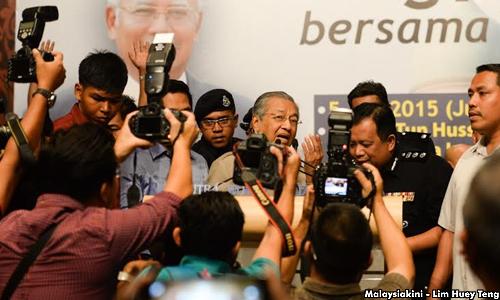 Mahathir gets a taste of his own medicine as he is dragged away by police – prison next?

Running from Questions on 1MDB

Najib has now shown that he is well and truly cornered over 1MDB.  There are too many facts that are known and which he simply cannot disprove.

Today’s moving drama was the ultimate proof  that he cannot stand up to straight questions and that he would rather be seen to run away than be grilled in the limelight over Jho Low and 1MDB’s missing billions.

First, there was what had been clearly meant as a staged Q&A to produce some controlled messaging on this thorny subject, under the guise of a “Nothing to Hide” Session at a friendly NGO.

However, when news got out about the event it became the hottest ticket in town and the crowds arrived early this morning in droves.

It must have been an unusual experience for Najib not to have to pay for his audience.  On the other hand it was not at all the sort of audience he wanted.

The would-be questioners included Dr Mahathir himself and several other lethally well-informed critics with some very simple questions, which would have been extremely hard for Najib to answer.

For example: Why did 1MDB tell Bank Negara Malaysia it was transferring USD$1.19 billion into a joint venture with the company PetroSaudi, when in fact the money went straight into a Swiss bank account controlled by his side-kick and wife’s good friend, Jho Low?

Najib clearly cannot think of a suitable answer or he would have come already to Parliament and given it, instead of sending his deputies to waffle indirectly around the subject.

And nor can the Prime Minister offload the blame.   He has already tried it, but it didn’t work, because too much is now known about his commanding role at 1MDB.

Najib had made the mistake of appointing himself the sole shareholder and sole decision maker over the fund, plainly in order to give himself the freedom and control he craved over the borrowing and disposal of the subsequent billions that have passed through his pet ‘development fund’.

But this sole power has also landed him with sole responsibility.

After the revelations that 1MDB is floundering in debt after billions were diverted into Jho Low’s bank accounts, Najib tried to pretend he had only a distant supervisory role and all questions on the matter would have to be referred to his juniors.

But this has been revealed as one of several lies that have been told by him and at his behest over past several weeks.

Another crucial lie, which has now been exposed, was that the missing cash from the PetroSaudi Joint Venture was sitting in 1MDB’s Brazen Sky bank account at BSI Bank in Singapore.

It isn’t, as his junior finance ministers have now been forced to admit – there is no cash in that account and nothing that can be translated into cash any time soon, if ever.

Najib has tried every which way to find a way off the hook: by ordering a hushed up and never ending enquiry by the Auditor General (who is directly employed by his own office); by trying to drum up cash from elsewhere to replace the missing money (like the Tabung Haji pilgrims fund) and by revaluing land handed almost free by him to 1MDB by over 500 times and then offering to buy it all back under his own Finance Ministry.

But, an army of critics from the opposition and from within his own party have not been prepared to have the wool pulled over their eyes and the public cheated in this way, in order to make up for the massive multi-billion dollar thefts from 1MDB.

Instead of covering up, they have asked, why has the PM not issued a warrant for the arrest and questioning of Jho Low?

Given he has not, there is really only one conclusion left for people to arrive at, which is not that the Prime Minister has ‘nothing to hide’, but that he has ‘everything to hide’.

Like his juniors who scuttled away from their questioning by the PAC and have refused to name another date, Najib too has acted a cockroach and rushed back into hiding.

Once again it has been the Inspector General of Police who has been forced to shield the Prime Minister by not doing his job (investigating crime) and acting the lackey instead.

After Najib bottled the occasion, having left the audience waiting two hours, it was the IGP who was left to explain that it was his decision owing to a ‘law and order’ issue.

Later Najib himself made this his excuse for not turning up and issued a statement alleging that it was the Chief of Police who had disappointed him by cancelling the event.

In fact, as anyone can see from the video online, there was a remarkably quiet and patient crowd in the hall at Dewan Tun Hussein Onn, this morning – considering they had been forced to wait so long before the PM’s no show had become apparent.

Dr Mahathir had then responded to requests to fill the empty podium and he was listened to by a crowd that was quiet and still.

The only trouble came after the police acted to silence Malaysia’s former leader that any threat to peace and harmony emerged.

The crowd was incensed when their listening was interrupted the moment that Mahathir touched on the thorny subject of Jho Low and their peaceful silence was then converted into cat calls against the police.

It took the former Prime Minister’s own intervention to return the matter to calm by agreeing to step down and to speak only to the press instead.

Malaysians have been left guessing as to what the next scenes in this astonishing piece of political theatre can possibly bring? 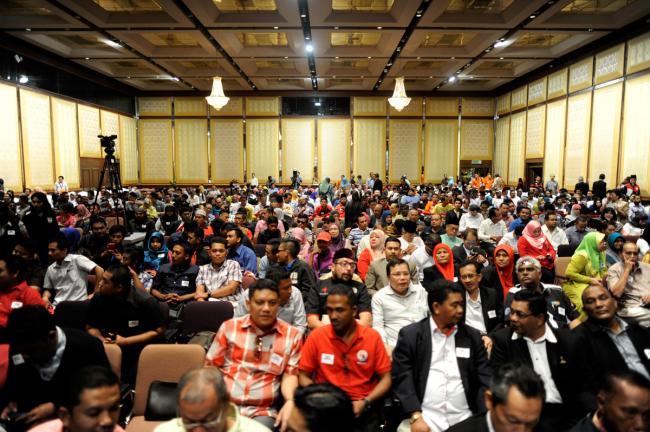 Riveted audience was accused of be a ‘public order’ problem