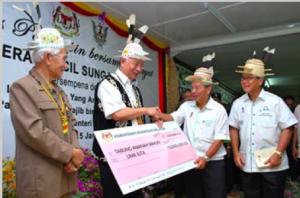 Pre-election ‘cheques’ and promises to the people of Bakun…. did they ever see the money?

After more than 15 years of broken promises, remarks by BN representatives in Belaga this weekend made clear they think the locals are completely stupid.

In a meaningless and rambling speech the local Assemblyman, Liwan Lagang, announced that with regard to the promised compensation to the natives, who were forced from their lands nearly 20 years ago, he “would continue pursuing the matter”!

Indeed, he went further and said that the Prime Minister Najib Razak had recently been consulted, as well as the former Chief Minister Taib Mahmud.

Were these not the two same gentlemen, who together solemnly promised back before the 2011 election that the compensation, already promised a decade earlier, would be forthcoming immediately?

Of course they were.  However, Liwan has now indicated that strange complications and difficulties have subsequently arisen, which mean that the issue is somehow difficult to resolve…. What a surprise.

Ex-MP Billy Abit Joo is still the Chairman of Wargana Consortium, the supposed cooperative that is “helping” the people with “jobs”

Liwan mumbled that the problem was something to do with “royalties” being “government to government” and possible alternatives of an “ex-gratia payment” should be explored instead.

Liwan indicated that he would be talking about all this next to the new Chief Minister, Taib’s brother in law Adenan Satem.

Come on Liwan. No one is holding their breath after nearly 20 years of this sort of nonsense and waffle.

The people of Belaga know by now that if there is any money knocking around it will all be grabbed, lock stock and barrel by your BN political cronies.

Take a look at Liwan’s fellow speechmaker on this occasion, for example, who was none other than the former MP for the area, Billy Abit Joo.

Abit Joo remains Chairman of the outfit called Wargana Consortium, a so-called local ‘cooperative’, which he took control of when he was still the MP for the area.

Wargana was supposed to clear up dangerous debris from Bakun lake…instead it lies hidden around the edges.

He also took personal ownership of a large chunk of the shares of this publicly funded but in fact private company, which has been handed millions of ringgit, in order to allegedly clear the Bakun Dam of unwanted debris.

Sarawak Report exposed this outrageous scandal back in 2012, pointing out that Abit Joo was making claims to be “helping the natives” through this supposed “cooperative”, when in fact he was only helping himself… to millions of ringgit.

Yet, on Saturday Abit Joo had the brass neck to once again be quoted making the same claim, according to the Borneo Post:

Meanwhile Wargana chairman Datuk Billy Abit Joo said the security and safety measures at Bakun remained the top priority of the group, which is contracted by Sarawak Hidro to remove logs and debris from the reservoir.

“locals have been very supportive to every effort and programme meant for their wellbeing. We will continue helping the Belaga folk,” said the former Hulu Rajang MP [Borneo Post]

Debris and illegal logging are the problems caused by corruption at Bakun.

As Sarawak Report detailed back in 2012, all the talk about Wargana being a ‘native cooperative’ and of the locals receiving ‘shares’ and ‘dividends’ as well as ‘jobs’ was just a thin disguise for a big fat personal handout to Mr Abit Joo and his political boss James Masing, who each own some 25,000 shares each in the company (Masing through his father in law).

Out of a consortium comprising 3 private companies and 300,000 shares only 25 shares were given to ‘local people’, specifically to 25 local headmen, who received one share each of the company Sinaran Bakun (M) Bhd, which owns a third of the consortium.

The directors controlling the whole outfit were the politician Abit Joo and Masing’s father in law, along with the businessman who had most of the rest of the shares, David Wong.

Incidentally, although Sinaran Bakun (M) is called a Berhad, it is not in fact quoted on the Bursa Malaysia stock exchange.  And its directors are again Abit Joo and Masing’s Dad in law, who have two shares each, compared to the one share given to each head man.

Apparently, talk was originally that these headmen would receive dividends on behalf of their longhouses, which they could distribute.  However, the company directors have yet to deliver.

Wargana was in fact set up in 2005, long before the Bakun dam was completed, with Abit Joo already in charge.  The company acquired large timber concessions – do the natives know anything about these and are they now enjoying any of the profits?  The answer, apparently, is no. 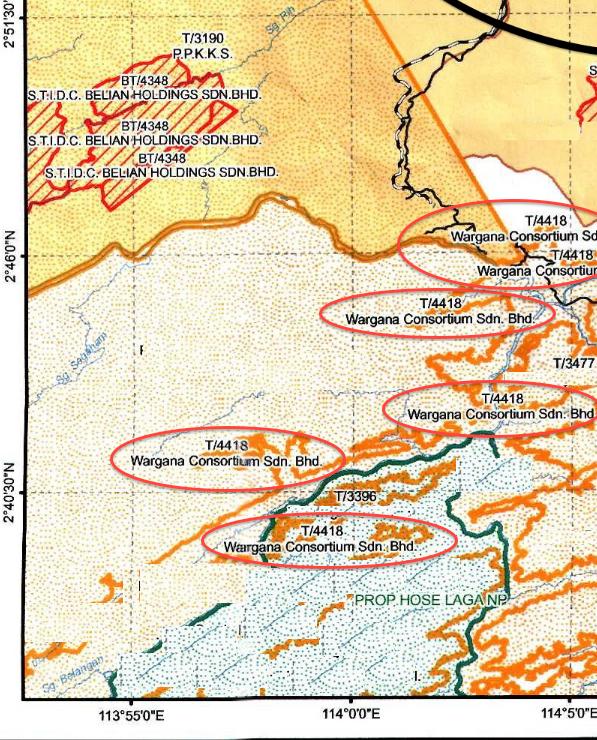 So, how has Wagarna and its political Chairman Billy Abit Joo been “helping” the local people?  Since there have been no dividends, have there been jobs instead?

This is certainly what was implied when a RM9million contract was issued by Sarawak Hydro to clear debris back in 2010.  However, the jobs did not apparently emerge. As one local source explained:

“Wargana Consortium was supposed to build an incinerator to burn this wood, but they have not.  So they are just allowing other small outfits to deal with the wood and again they are turning a blind eye.  Those small contractors have just been hiding the wood in secret places around the lake!”

Hence, the mounds of dangerous debris around Bakun, which has remained uncleared!

Worse, to placate angry headmen and communities who have seen nothing from the Wargana contract, our sources have told us that the authorities have turned a blind eye to illegal logging by certain headmen in the area, using hired labour from Bintulu.

This is the very activity that the present administration has been at such pains to condemn.

Yet, there on Saturday Billy Abit Joo was still claiming that somehow three jobs created by the Sarawak Rivers Board at a security check point was evidence that Wargana is delivering the jobs and wealth it had claimed it would. 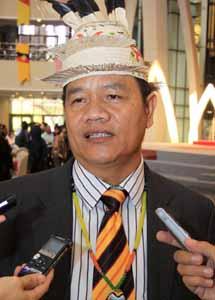 Lagang is full of meaningless suggestions. but where are the jobs and compensation?

Liwan Lagang, who is still faced with trying to win his seat at the next state election, meanwhile issued a more realistic plea to his own government and to Sarawak Hydro, asking for more jobs to be provided for the locality’s skilled youth.

But, the Assemblyman then hastened to grovel to Sarawak Hydro, thanking it for “organising many activities” for local people, as part of its corporate and social responsibility programme.

Well, Liwan explained there is talk of ‘maybe’ a museum in the area and a possible site has even been identified… if an access road could at some stage be drummed up.

The Bakun Dam is itself a monument to towering corruption and the greatest white elephant in South East Asia and locals will not waste energy expecting anything will come of Lagang’s latest fantasies about jobs in museums any time soon.

More telling was Lagang’s recognition that a solar panel experiment for natives to generate electricity on their floating homes in Bakun Lake is a far more useful tool for local people (and exponentially cheaper and less destructive) than the vast hydro-power project, which still has not produced the once promised free local electricity supply.

Checkpoint to keep out visitors!

There was another moment of honesty when Lagang discussed the purpose of the new security checkpoint at Bakun:

““With the presence of the SRB officers, there will be strict enforcement. We don’t want jetty users or visitors to come and create disharmony among the locals,” he admitted.

So, the locals are to be made prisoners and visitors are to be kept away, in case the truth be told?

Of course BN will return some of the stolen money from the people of Belaga, in the form of a small cash bribe before the next election. But, these politicians want to keep the people poor, so the bribe can be as small as possible.

For this reason alone the people of Bakun will never receive their promised compensation from a BN government.